A vault of glass and the deepest volcanic eruption ever detected 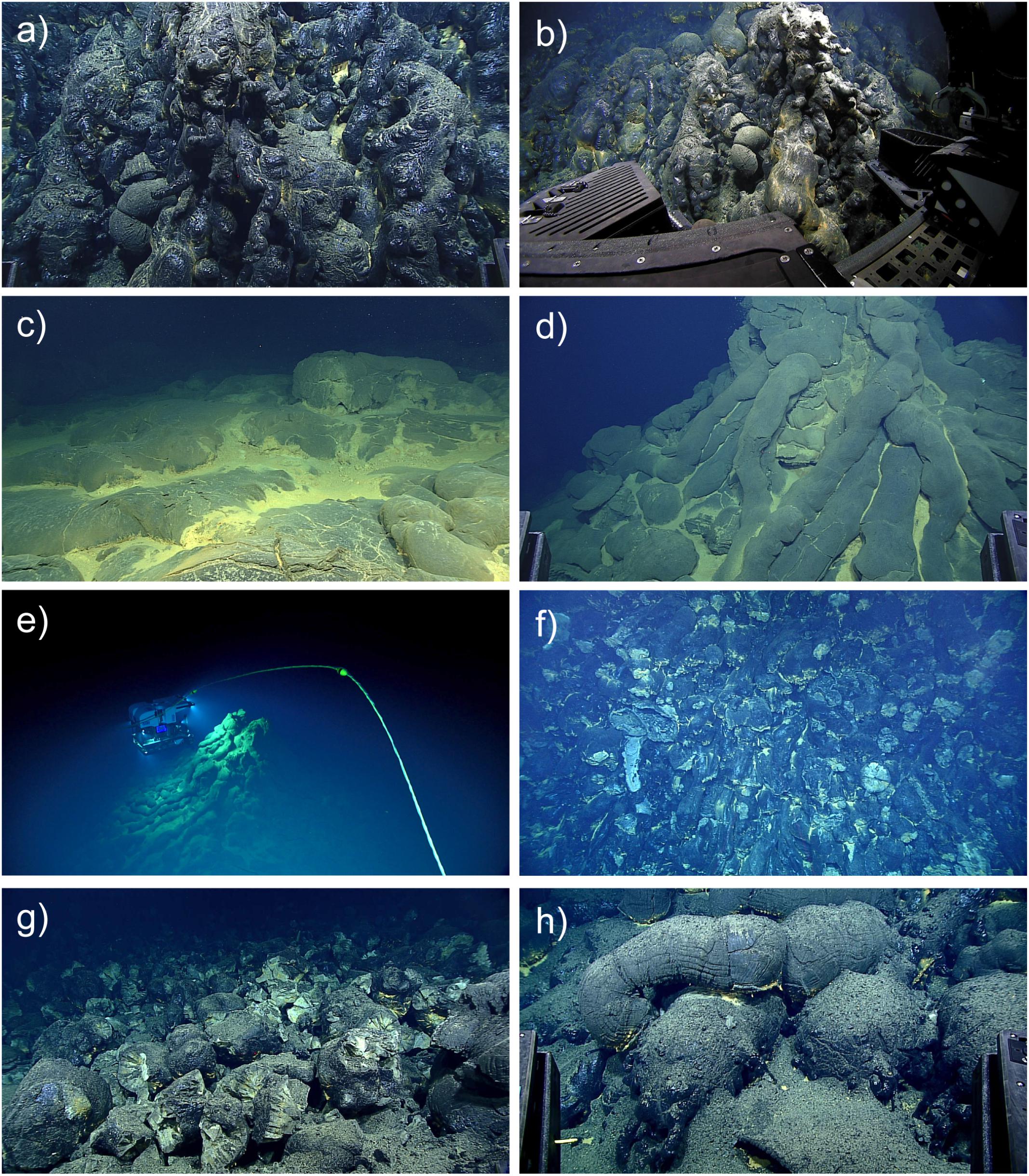 Close to the Mariana Trench and nearly three miles below sea level, scientists found evidence of an underwater eruption that was only months old.

In 2015, an international team of researchers sent robotic submersibles beneath the waves north of Guam.
They had set out to study an area south and west of the Mariana Trench — the deepest groove in Earth’s oceans — and an arc of volcanoes, hoping to spy hidden hydrothermal vents. 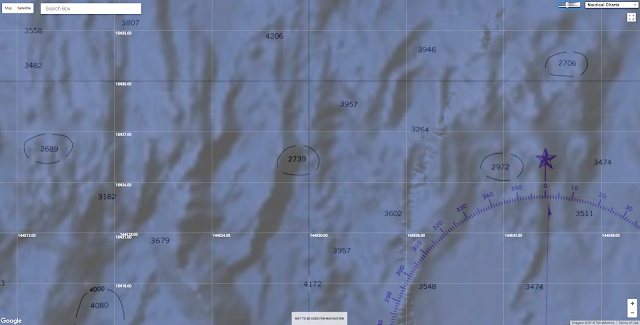 Instead, they discovered a spectacular glassy labyrinth, nearly three miles below sea level.
It was recently cooled lava, the product of the deepest underwater volcanic eruption ever recorded by scientists. 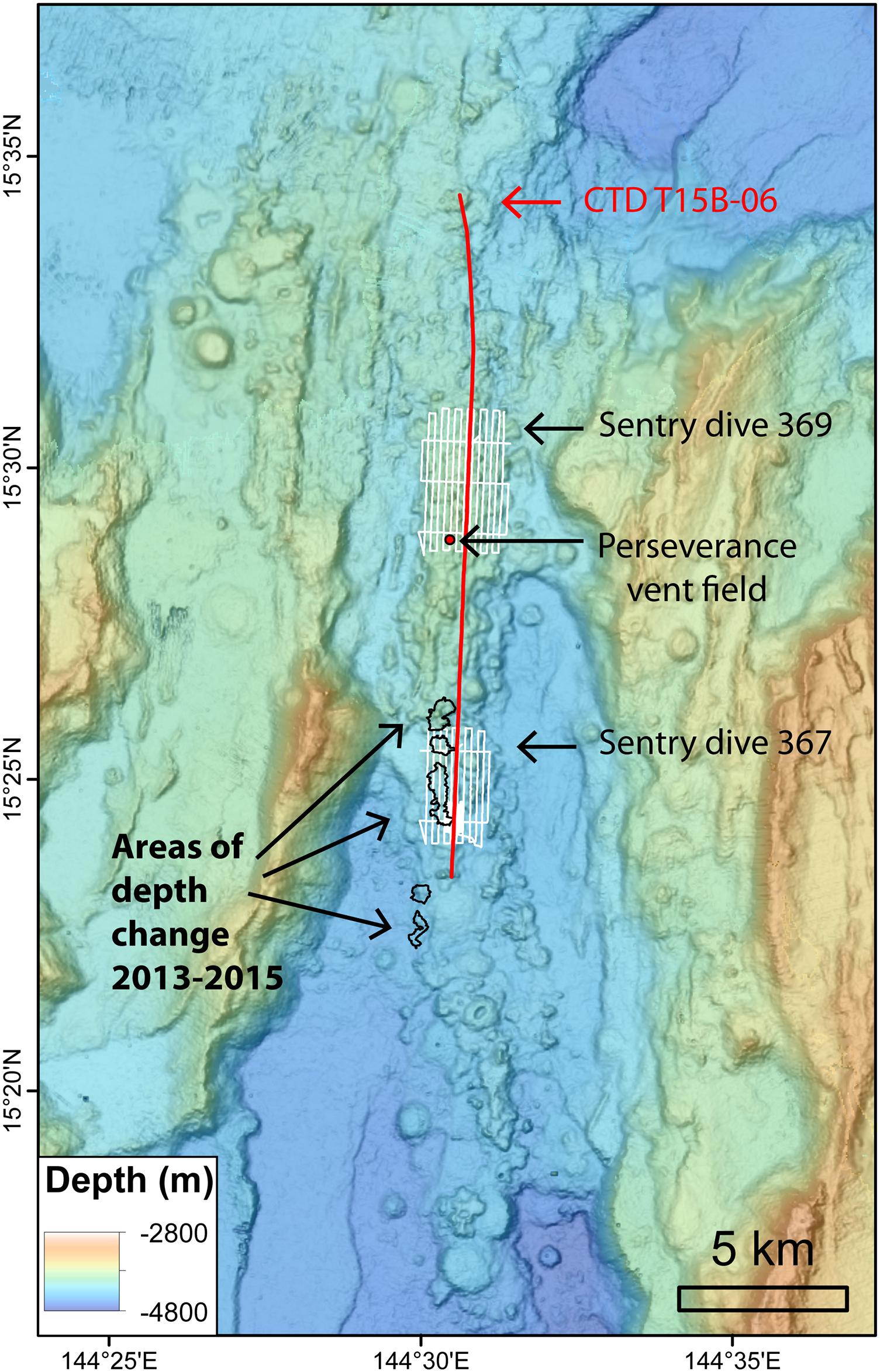 Bathymetric map of the 15.5°N segment of the Mariana back-arc showing the location of CTD tow T15B-06 (red line; data shown in Figure 3), AUV Sentry dives 369 and 367 (white lines; the latter shown in Figure 4), and areas of depth change between bathymetric surveys in 2013 and 2015 (black outlines; data shown in Figure 6). Red dot shows location of Perseverance vent field.
The researchers reported their discovery last week in Frontiers in Earth Science.
The identification of deep-sea eruptions happens very rarely, said Bill Chadwick, a seafloor geologist at the NOAA Pacific Marine Environmental Laboratory in Oregon and lead author of the new study, and discovering one “is an opportunity to learn about a fundamental Earth process that we know little about.” 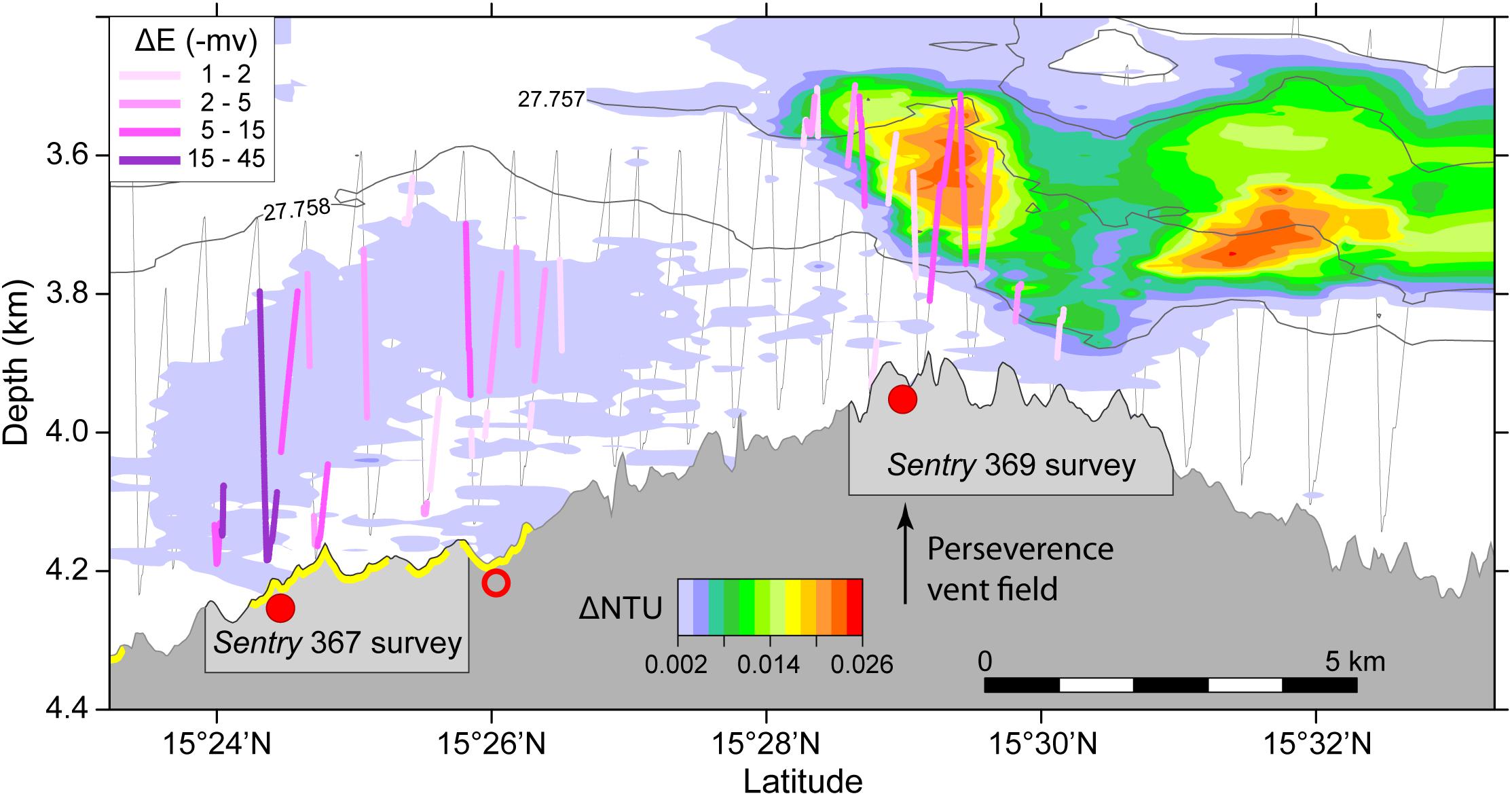 The finding wasn’t just notable for its extraordinary depth.
The extremely young age of the lava deposit offers scientists a window into the very beginnings of what happens when a volcanic outburst occurs beneath the seas.
So often, they just see an epilogue.

“Much of what we know about underwater eruptions, their hydrothermal systems and the biological communities that grow on them is gained from studying old, even ancient, volcanic systems,” said Rebecca Williams, a volcanologist at the University of Hull in England, who wasn’t involved in the research.

Around 80 percent of Earth’s eruptions take place within the oceans.
But their depth and remoteness makes finding these near-ubiquitous events difficult.
Before 1990, not a single submarine eruption had been detected.
Today, even with better instrumentation and exploration, only 40 or so have been found.

It doesn’t help that we barely know what the seafloor itself looks like.
Samuel Mitchell, a doctoral student researching underwater eruptions at the University of Hawaii at Mānoa, and who was not involved in the study, said: “We actually have better maps of the entire surfaces of the moon and Mars in comparison to our own seafloor.”

The deepest-known undersea volcano has been discovered in the western Pacific Ocean.
Credit: Oregon State University

Robotic submersibles are helping to close this information gap.
Dr. Chadwick’s team made the initial discovery using an autonomous vehicle named Sentry, which was built by the Woods Hole Oceanographic Institution.
Back in 2015, it was perusing the seafloor near where the Pacific tectonic plate is sinking beneath the Philippine Sea plate.
To the east, there’s the Mariana Trench and an arc of about 60 underwater volcanic monuments, also called seamounts. 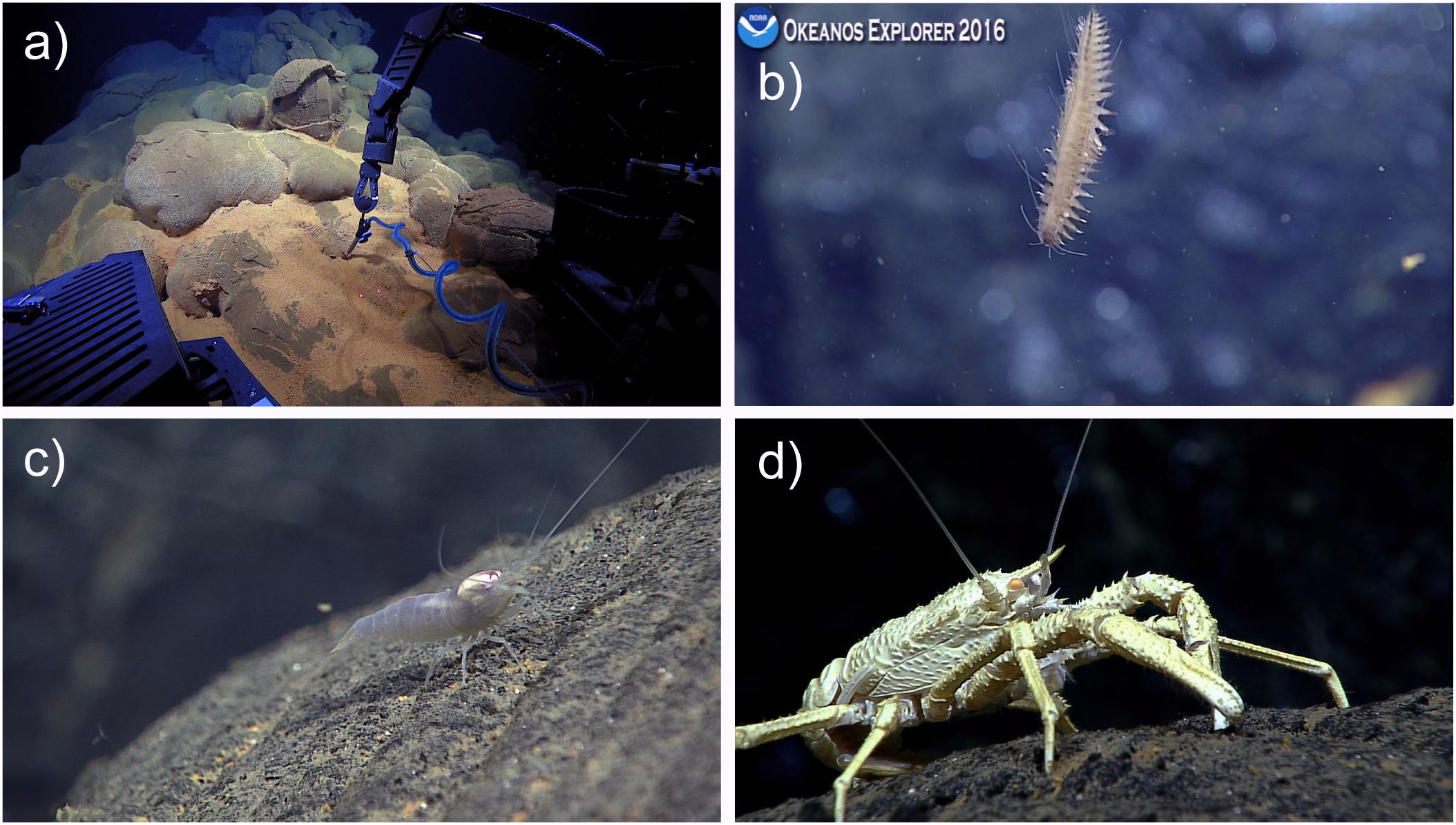 Images made by the Deep Discoverer show, clockwise from top left, a robotic arm measuring temperature near a sea vent, a bristle worm, a squat lobster and a shrimp.
Credit Photographs by Bill Chadwick et al

To the west of this arc, the seafloor is slowly spreading.
Here, in what is known as the Mariana back-arc, additional volcanic activity is possible — and this is where Sentry spotted the prolific lava flows.

Old lava flows were expected here, but what the researchers detected is the first known new eruption in the back-arc region.
That makes this discovery enormously serendipitous, as eruptions here are only expected every few hundred years or so. 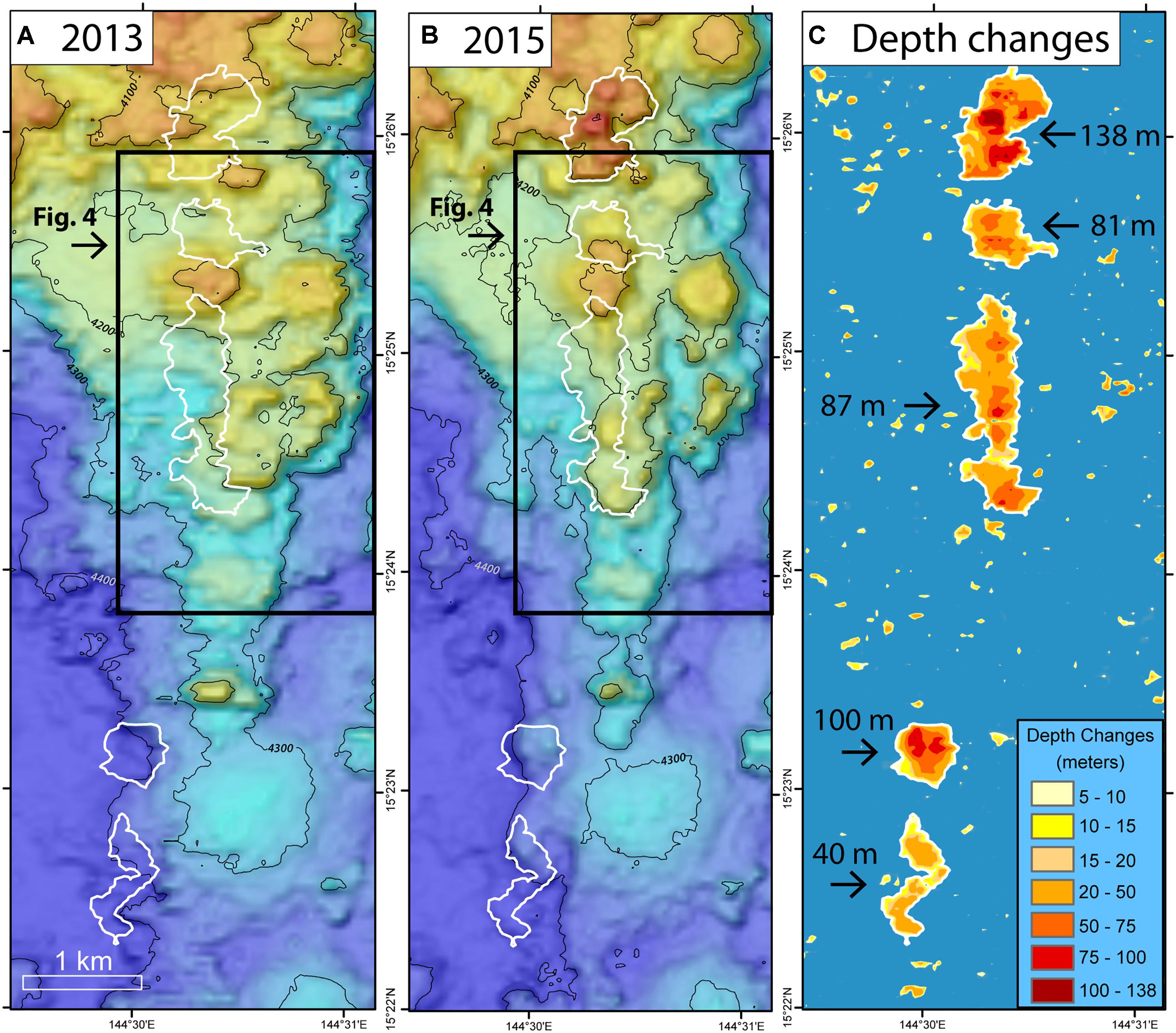 After small sections of the dark, shiny lava flows were spotted by Sentry’s onboard cameras, bathymetric scans of the area from the researchers’ ship confirmed they are about 4.5 miles long and up to 450 feet thick.

Produced by the rapid quenching of lava, the individual protuberances form a surreal collection of glass.
Countless bulbous mounds and pillows protruding from the streams are adorned with narrow tubes, which the study authors compare to drips of wax on the outside of a candle.

In 2015, sediment had yet to cover the flows, and hydrothermal vents were present.
By 2016, the vents had quieted as the flow continued to cool.
Speedy, mobile creatures like shrimp and squat lobsters had moved in.
The surface was not yet hospitable for slower colonizers like sponges and anemones.


Underwater volcanic eruptions and magma flows on the sea floor have been seen for the first time ever thanks to video captured by NOAA in 2009.
James Williams talks to the lead scientist on the project to learn the story behind the explosive images.

Both the lava’s cooling rate and the incomplete invasion of life indicated the eruption likely took place only months before the team stumbled across it.
That youthfulness matters — these fresh rocks provide relatively unaltered insights into the chemical alchemy that produced them.
It is also an opportunity to watch diverse communities of living things emerge and change as the hydrothermal system first springs up and then declines.

“The closer in time we are to an event like this, I think the more we can learn about its impacts on deep-sea ecosystems and the chemistry of the oceans,” Dr. Chadwick said.