Less than 1 percent of the world's shipwrecks have been explored 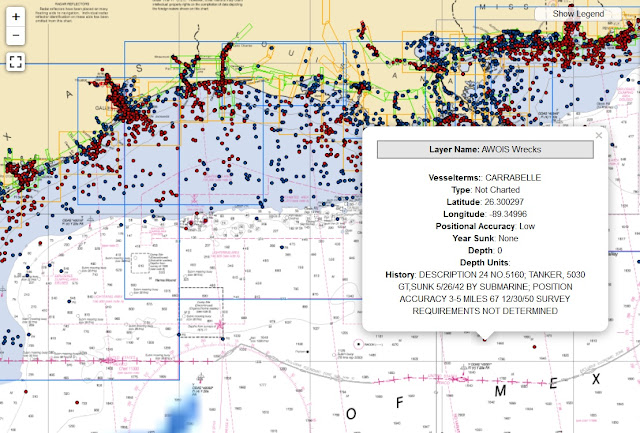 From Popular Mechanics by Jay Bennett


A rough estimate puts more than three million shipwrecks on the ocean floor.
This number represents ships throughout the entirety of human history, from 10,000-year-old dugout canoes preserved in the muck to 21st century wrecks that you might have read about in the news.
There are so many shipwrecks, in fact, that a search operation for the missing Malaysia Airlines Flight 370 has discovered two by accident.
The Battle of the Atlantic alone, which spanned nearly six years during World War II, claimed over 3,500 merchant vessels, 175 warships, and 783 submarines.
Particularly interesting are the cargo ships that literally contain treasure, such as Spanish galleons that transported gold and jewels across the Atlantic.
The Uluburun shipwreck off the coast of southwestern Turkey is roughly 3,300 years old, and that Late Bronze Age vessel contained gold, silver, jewels, copper and tin ingots, tools, swords and other weapons, and much more trade cargo—all of it hauled up over the course of 10 years and 22,413 dives.
But most wrecks don't receive that kind of attention.
In fact, less than 10 percent of the shipwrecks that we we've located—which account for just 10 percent of all shipwrecks in the world—have been surveyed or visited by divers.
Fishing trawlers snag on sunken ships, sonar readings pick them up, historical records tell us where they should be, harbor dredging operations uncover wrecks that have long been lost below the seafloor—but there simply isn't enough time and money to explore the vast majority of them.

The Sweepstakes was built in 1867 as a two-masted schooner in Burlington, Ontario by John Simpson.
The ship's length is 36.3m (119ft) and lays just below the surface in Big Tub harbor with a maximum depth of 7m (20ft).
The Sweepstakes was damaged off Cove Island, then towed to Big Tub harbor where she sank in 1885.
At times, the shipwreck will sit well below the surface of Lake Huron and then when the lake becomes shallower, sections of the Sweepstakes rise up out of the water making parts clearly visible.
Throughout Fathom Five National Marine Park, there are 22 shipwrecks and many people come here to snorkel and scuba dive in these pristine waters.

James Delgado, the Director of Maritime Heritage at the National Oceanic and Atmospheric Administration (NOAA), says that there are an estimated 4,300 shipwrecks within NOAA's 14 National Marine Sanctuaries.
Of these, 432 have been dived on and surveyed.
And these are shipwrecks within a mapped area set aside for preservation.
"There are laws and regulations directing NOAA to find what lies in those waters and assess it," Delgado said in an email.
Similar to other marine preservation organizations around the world, NOAA is not only devoted to discovering what the ships are, but also how their presence might affect the ecology of the marine environments they lie within.
Outside of marine sanctuaries, there isn't as much of an incentive.
Most shipwrecks are documented for a much simpler reason: to avoid collisions or other incidents. NOAA's Office of Coast Survey maintains a database of about 20,000 ships that is available to the public, primarily for the benefit of navigators and researchers.
The information for that database comes from two organizations within NOAA, the Electronic Navigational Charts (ENC) and the Automated Wrecks and Obstructions Information System (AWOIS).
Still, it's difficult to pinpoint exactly where a shipwreck is on the ocean floor.
The database lists some limitations, including that it "contains wreck features from two different sources that were created for different purposes, and there is not a perfect match of features from either source. The same wreck may be found in both the ENC wrecks and AWOIS wrecks layers, although the positions may not necessarily agree."

Riches Under the Sea

Still, there is an estimated $60 billion in sunken treasure around the world, just waiting at the bottom of the ocean.
And that doesn't include the historical and cultural value of excavating shipwreck sites.
So why don't we explore more of them?
For one thing, it's hard to know what's worth the time.
Diving operations can cost millions of dollars, and before we go down there, we have no idea what the ship is, what it was carrying, and what condition the cargo is in. In some cases, we are not even 100 percent sure that the identified object is a ship at all.
"Not many people follow up on a target to determine if it is a wreck, and if so what type it is, and then if possible, which ship it is," says Delgado.
It is possible, however, that the situation will improve.
As Delgado points out, 90 to 95 percent of the sea floor itself remains unexplored.
There are a number of efforts to change that, such as the Ocean Discovery XPrize that is offering $7 million in prize money for private teams that build an autonomous underwater vehicle (AUV) and create a bathymetric map (like a topographic map, but of the sea floor).
The Schmidt Ocean Institute, founded by former Google CEO Eric Schmidt, maintains a 272-foot vessel outfitted with modern oceanographic equipment that scientists can apply to use for various research expeditions.
The good news, for shipwrecks explorers at least, is that the majority of shipwrecks are actually near the coast, with a large percentage of incidents occurring in and around the entryways to ports and harbors.
"Some harbors are tough to enter, like Oregon's Columbia River Bar, or leave, like San Francisco's Golden Gate and Bar, due to shifting winds, shifting sands, fog, storms, or strong tides," says Delgado.
"But also for the same reason that most auto accidents seem to happen within a mile of home, and there are many accidents coming in and out of parking lots, people seem to be less cautious or more aggressive."
With most shipwrecks so close to the shore, and multiple examples of wealthy patrons sponsoring exploration and research expeditions, we could see many of these unexplored shipwrecks investigated in the coming years.
But even with advancing AUV technologies and efforts to map more of the ocean floor, many shipwrecks are likely to remain unexplored until they are buried below the sands or decay beyond the point of recognition.