Leaking pingos 'can explode under the sea in the Arctic, as well as on land' : it could explain the Bermuda Triangle mystery

From Siberian Times by Maja Sojtaric

Warning of methane blasts in Kara Sea adjacent to Yamal craters caused by gas eruptions associated with melting permafrost due to global warming.
Huge attention has focused on the mysterious large holes that have suddenly appeared in the Siberian Arctic recently, and now there is evidence of a similar process underwater in southern areas of the Kara Sea.
Large mounds - described as pingos - have been identified on the seabed off the Yamal Peninsula, and their formation is seen as due to the thawing of subsea permafrost, causing a 'high accumulation' of methane gas. 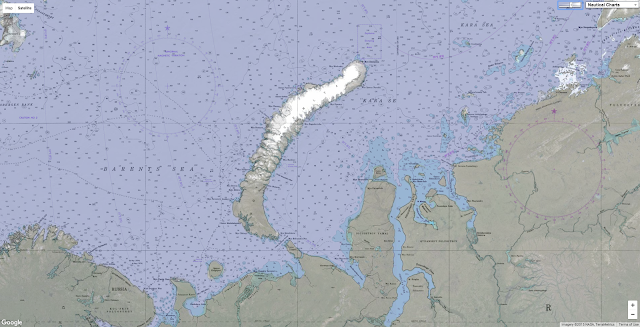 These mounds 'are leaking methane' and their 'blowout potential' poses a significant 'geohazard' to energy exploration in Arctic waters, according to new research by scientists at Centre for Arctic Gas Hydrate, Environment and Climate (CAGE) in Norway, supported by the Federal Subsoil Resources Management Agency of Russia.
For example, in a little-reported incident 20 years ago, during 'geotechnological drilling' by Russian vessel Bavenit in the Pechora Sea, a pingo gas deposit was opened, threatening the ship's safety with a sudden methane release, a process that has been claimed as the cause of the Bermuda Triangle in the Atlantic Ocean. Gas hydrate is also known as the ice that burns. You can literally set it on fire.

Dr Pavel Serov, lead author of the research which is published in the Journal of Geophysical Research, said: 'Pingos are intensively discussed in the scientific community especially in the context of global climate warming scenarios.
They may be the step before the methane blows out.'
The researchers focused on 'two subsea pingos that were identified offshore (of) the very same area of the mysterious Yamal peninsula craters', reported the CAGE website.

The Siberian Times has led the way in drawing attention to the land craters, publishing the views of scientists on their formation and spectacular pictures of the giant holes taken during expeditions to the new phenomena.
After initial doubts, scientists now believe the craters were formed by pingos erupting under pressure of methane gas released by thawing of permafrost caused by warming temperatures.

Now the Norwegian study 'shows how important methane accumulation is for the formation of subsea pingos'.
These structures are 'now found strewn on the ocean floor in the Arctic shallow seas', according to the research by CAGE, part of UiT The Arctic University of Norway.
'The study area lies in the shallow South Kara Sea, at approximately 40-metre water depth.' 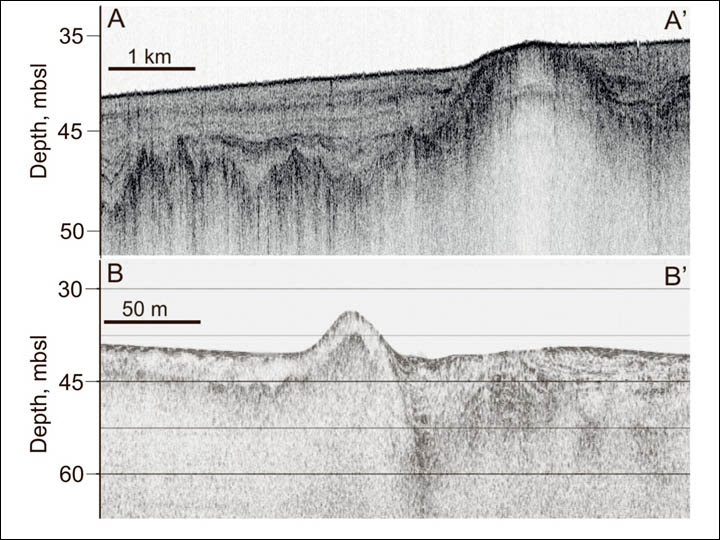 This is the view of the subsea pingo features as the scientists see them. Pictures: Pavel Serov

Initially it was thought the undersea pingos were 'relics of the Ice Age', but the groundbreaking new research indicates the reverse, indicated CAGE director Professor Jurgen Mienert, a co-author of the paper.
'The CAGE study shows these newly discovered subsea pingos may be quite recent.'

Crucially, 'gas leakage from one of the ocean floor pingos offshore (of) Siberia shows a specific chemical signature that indicates modern generation of methane', state the researchers.
'We suggest that the mound formed more recently, moving material physically upwards.'
Likewise the processes leading to methane eruptions on the neighbouring peninsula are seen as very recent. 'On land pingos are mainly formed when the water freezes into an ice core under soil, because of the chilling temperatures of permafrost,' states the website synopsis.
However, subsea pingos, may be formed because of the thawing of relict subsea permafrost and dissociation of methane rich gas hydrates.
Gas hydrates are ice-like solids composed of among other things methane and water.
They form and remain stable under a combination of low temperature and high pressure.

'In permafrost the temperatures are very low and gas hydrates are stable even under the low pressure, such as on shallow Arctic seas.
Thawing of permafrost leads to temperature increases, which in turn leads to melting of gas hydrates, therefore, releasing the formerly trapped gas.'

'The methane creates the necessary force that pushes the remaining frozen sediment layers upward, forming mounds,' said Dr Serov. Research indicates that 'subsea pingos can potentially blow out' without the 'massive attention' that has greeted the land pingo eruptions, which leave craters visible from space in their wake.
Yet in the Kara or other Arctic seas 'massive expulsions of methane' go into the ocean.
The researchers warned: 'For petroleum companies these areas may pose a geohazard. Drilling a hole into one of these subsea pingos, can be not only expensive but also catastrophic. During a geotechnical drilling in the close by Pechora Sea, an industry vessel unknowingly drilled a hole into one of these mounds. It triggered a massive release of gas that almost sunk the vessel.'

This is believed to refer to an incident in 1995 involving the Bavenit, west of Vaygach Island in the Pechora Sea. Dr Serov stated: 'We don't know if the methane expelled from the subsea pingos reaches the atmosphere. But it is crucial that we observe and understand these processes better, especially in shallow areas, where the distance between the ocean floor and the atmosphere is short.'

The Siberian Times in September carried a warning from Russian scientists of the threat on Yamal Peninsula - location of world's largest natural gas reserves - of methane explosions.
Scientists from Trofimuk Institute of Petroleum Geology and Geophysics said the process by which a series of craters formed was caused by  the melting of gas hydrates and the emission of methane. The Siberian Times has led the way in drawing attention to the land craters, publishing the views of scientists on their formation and spectacular pictures of the giant holes taken during expeditions to the new phenomena.
Scientists narrow down the cause and think it is related to warming.
Pictures: Vasily Bogoyavlensky, Vladimir Pushkarev

This accumulates in a pingo - a mound of earth-covered ice - which then erupts causing the formation of the holes.
One land pingo is believed to be poised to explode 'at any moment'.

It is now being constantly monitored by a Russian space satellite in an attempt to catch the moment when the eruption occurs.
Dr Igor Yeltsov, deputy director of the Trofimuk Institute, said of the newly-formed land craters: 'In the last decades, temperatures have climbed and caused the release of gas hydrates.
'This resembles a nuclear reaction. Last year I compared it with the Bermuda Triangle, because, according to our theory, the cause of this is a mass yield of methane. The volume of methane during transition from a solid to a gaseous state increases about 150 times.'

The largest Yamal hole 'is a unique object for science.
We did not have any chance to study such phenomenon before.
The importance of the study increases if we take into account that six kilometres from the crater is a main gas pipeline, and 36 kilometres away is the Bovanenkovo gas deposit.'
Such eruptions 'can easily repeat', he warned.
'We need follow closely the processes with permafrost and gas hydrates on Yamal,' he said.
'We underestimate the danger that methane brings to us.'