Wreck of German U-boat found off coast of Scotland 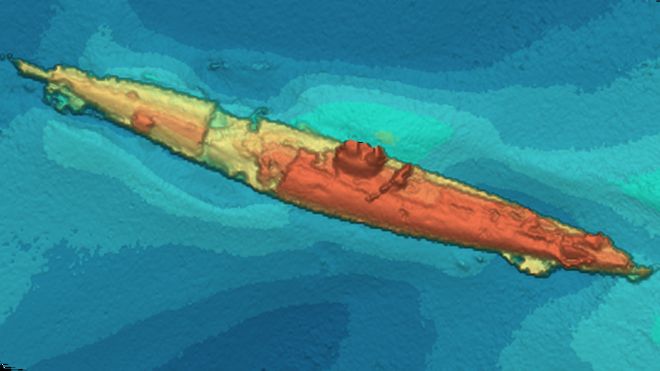 The wreck of a German U-boat that sank almost 100 years ago has been discovered by engineers laying subsea power cables. 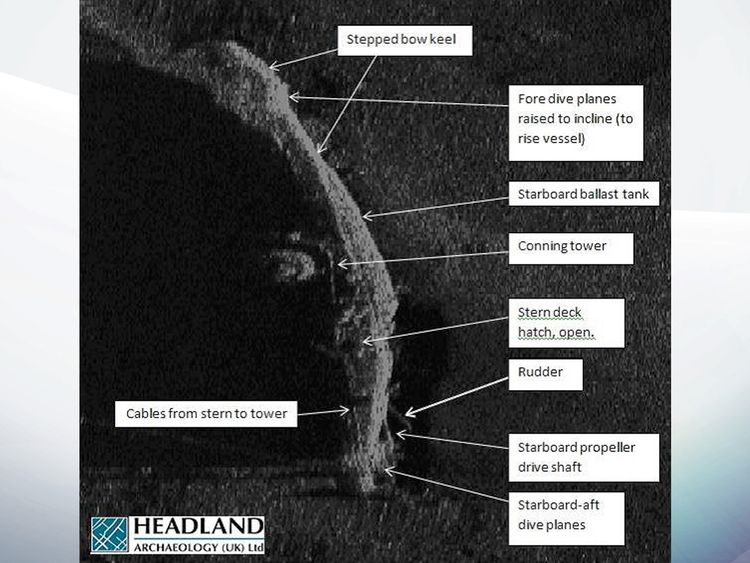 Images show the damage done to the wreck of the U-boat
Remarkable sonar images show the missing World War One submarine is largely intact and lying off the Galloway coast.
Experts believe the vessel could be the UB-85, a sub that sank in 1918, according to official records.
However, naval folklore suggests it may have been attacked by a "sea monster".


The WW1 U-boat wreck found off the coast of Scotland
could be the key to unlocking the alleged "Loch Ness" sinking.
source : Huffington Post

However, Dr Innes McCartney, a historian and nautical archaeologist who helped identify the wreckage, does not believe the tale.
"In reality, the real sea monster was the U-boat, here trying to sink ships," he said.
He added: "The submarine was caught on the surface at night, recharging its batteries.
"It saw the patrol ship coming. It attempted to do a crash dive to get away.
"Once the submarine was under water, it rapidly started flooding from above so they had no option but to blow all the compressed air they had, bring the submarine to the surface at which point all they could do was surrender."
The historian said tales of sea monsters and haunted U-boats came about due to secrecy surrounding exactly what happened during the first U-boat war which meant that period was "ripe for conspiracies".
He said the stories were often concocted as a result of journalists and ex-Navy men "talking late at night, after having a nice time". 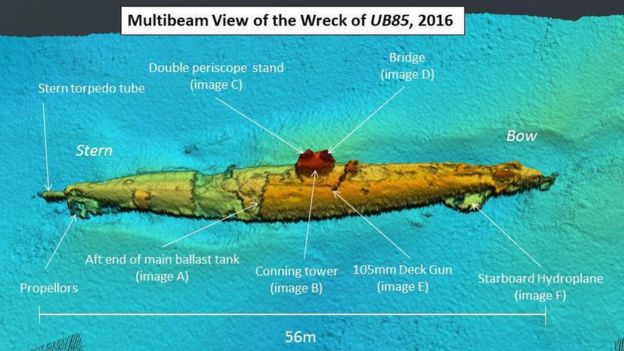 Dr McCartney said there were at least 12 British and German submarines known to have sunk in the Irish Sea.
He said: "The features of this particular wreck, which is largely intact, confirm it as a UBIII-Class submarine, of which we know of two which were lost in the area - the more famous UB-85 and its sister boat UB-82.
"While I can conclude that this wreck is likely to be one or the other, they would be practically impossible to tell apart, aside from the numbers painted on them in service, now obviously long gone.
"Unless a diver can find a shipyard stamp, we cannot say definitively, but yes, we're certainly closer to solving the so-called mystery of UB-85 and the reason behind its sinking - whether common mechanical failure or something that is less easily explained." 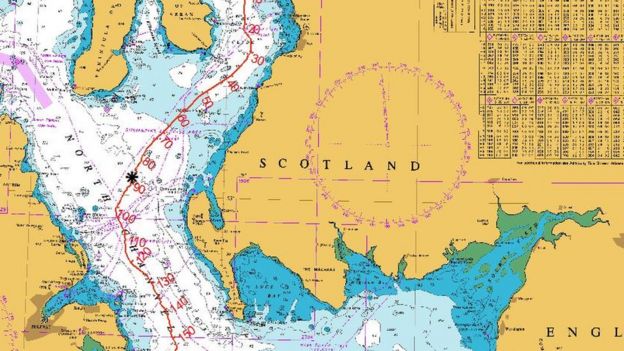 The site of the wreckage is marked with a black star, on the route of the undersea cable
off coast of Stranraer

The historic discovery was made by engineers involved in the £1bn Western Link project to lay a subsea power line between Ayrshire and the Wirral.
The 385km (239miles) long cable will carry renewable energy produced in Scotland to England and Wales.
The engineers found the wreckage 120m north-west of the centre of the planned route, off the Stranraer coast.
It is about 45m long, with debris spilling from the stern.

Gary Campbell, the keeper of the Official Sightings Register of the Loch Ness Monster, said it was "entirely feasible" that a large sea creature disabled the submarine. 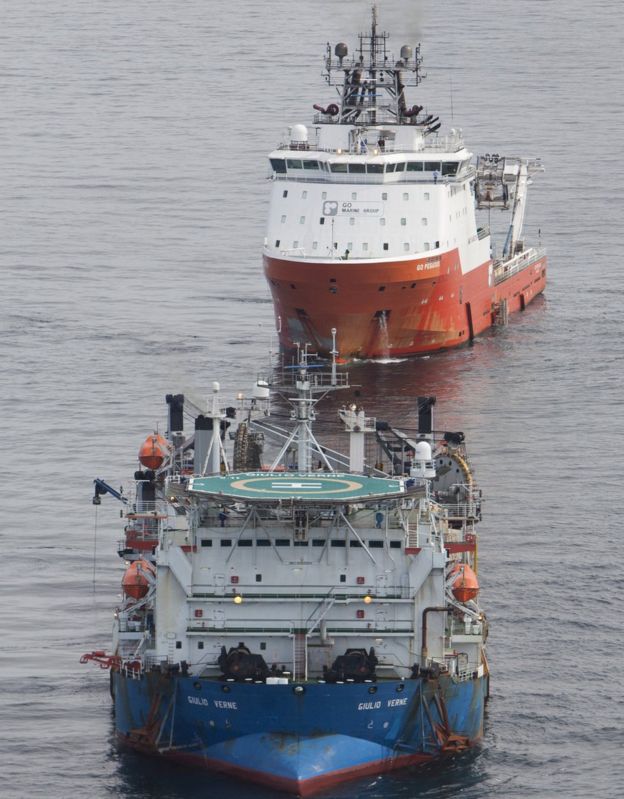 "The World War One report from the captain of the British ship HMS Hilary a year earlier makes it clear that sea farers at that time were well aware of large sea 'monsters' that could be harmful to their ships," he said.
"The area of sea where the attack took place has a history of sea monster sightings - they have ranged from the north coast of Wales to Liverpool Bay. What the German captain said could well be true."

Scottish Power Transmission and the National Grid are working together on the Western Link project to lay the undersea cable.
Peter Roper, of Scottish Power, said: "The images we get back from the subsea scans are incredibly detailed, but we obviously need to be aware of what lies beneath before we can start laying a power cable.
"In all the years I have been building power lines, I can say that this is the most extraordinary discovery."

National Grid's Graham Edwards said: "The Western Link is a very significant project for the UK and has required careful planning in all aspects, but particularly in the laying of high-voltage cables in the sea, where we are working hard to minimise our impact on the environment.
"During construction we take great care over archaeology, whether on land or at sea, and it's always exciting to record a significant find and help to shed new light on our history - especially one with such a good tale involved!"