Plastics weighing 191 times as much as the Titanic are dumped in the oceans every year as nations led by countries in Asia struggle to manage waste, the first study to quantify the problem showed.

From NYTimes by John Schwartz


Some eight million metric tons of plastic waste makes its way into the world’s oceans each year, and the amount of the debris is likely to increase greatly over the next decade unless nations take strong measures to dispose of their trash responsibly, new research suggests.

The report, which appeared in the journal Science on Thursday, is the most ambitious effort yet to estimate how much plastic debris ends up in the sea. 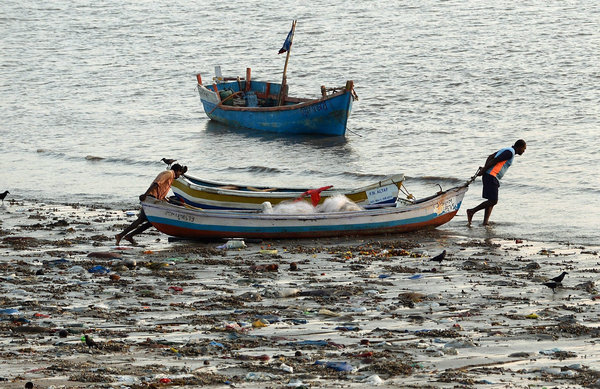 Jenna Jambeck, an assistant professor of environmental engineering at the University of Georgia and lead author of the study, said the amount of plastic that entered the oceans in the year measured, 2010, might be as little as 4.8 million metric tons or as much as 12.7 million.
The paper’s middle figure of eight million, she said, is the equivalent of “five plastic grocery bags filled with plastic for every foot of coastline in the world” — a visualization that, she said, “sort of blew my mind.”

By 2025, she said, the amount of plastic projected to be entering the oceans would constitute the equivalent of 10 bags per foot of coastline. Kuta beach, Indonesia, strewn with plastic litter.
Up to 83% of waste is mismanaged in the country.
Photograph: Agung Parameswara/Getty Images


The researchers, from the United States and Australia, derived their estimates through a complex calculation that began with the overall mass of waste produced per person annually in 192 nations that have coastlines, worked through the proportion of that waste likely to be plastic, and how much of the plastic could end up in the ocean because of each nation’s waste management practices.
The researchers then projected the amount of waste going forward based on population growth estimates. 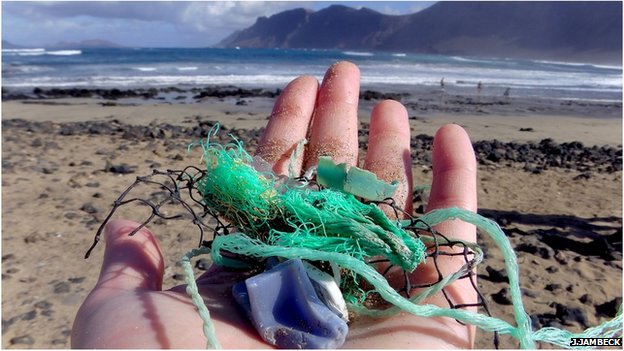 “This is a significant study,” said Nancy Wallace, director of the marine debris program at the National Oceanic and Atmospheric Administration, who saw the paper before it was published.
Ms. Wallace applauded what she considered the sophisticated use of available data to estimate the amount of plastic entering the marine environment, both collectively and country by country.
“Of course we know these aren’t absolute numbers, but it gives us an idea of the magnitude, and where we might need to focus our efforts to affect the issue,” she said.

The research also lists the world’s 20 worst plastic polluters, from China to the United States, based on such factors as size of coastal population and national plastic production.
According to the estimate, China tops the list, producing as much as 3.5 million metric tons of marine debris each year.
The United States, which generates as much as 110,000 metric tons of marine debris a year, came in at No. 20.
While Americans generate 2.6 kilograms of waste per person per day, or 5.7 pounds, to China’s 1.10 kilograms, the United States ranked lower on the list because of its more efficient waste management, Professor Jambeck said.

Inside the Garbage of the World Documentary from Philippe Carillo
Is the Plastic Trash Island floating in the Pacific Ocean a myth?
Are we getting poisoned?
How long do we have before a worldwide disaster happen?

Plastics have been spotted in the oceans since the 1970s.
In the intervening decades, masses of junk have been observed floating where ocean currents come together, and debris can be found on the remotest beaches and in arctic sea ice. Debris from urban activities and runoff accumulates at the edge of Lake Michigan.
(Courtesy Jenna Jambeck/University of Georgia)


The problem is more than an aesthetic one: Exposed to saltwater and sun, and the jostling of the surf, the debris shreds into tiny pieces that become coated with toxic substances like PCBs and other pollutants.
Research into the marine food chain suggests that fish and other organisms consume the bite-size particles and may reabsorb the toxic substances.
Those fish are eaten by other fish, and by people.
Cleaning up the plastic once it is in the oceans is impractical; only a portion of it floats, while most disappears, and presumably what does not wash ashore settles to the bottom.
Any collection system fine enough to capture the smaller particles would also pick up enormous amounts of marine life.
So the best option, Professor Jambeck and others suggest, is to improve waste management ashore.
But prodding developing countries to spend money on waste management is difficult, she acknowledged.
“You’ve got critical infrastructure needs first, like clean drinking water,” she said.
“It’s kind of easy to push waste to the side.”
Over the years she has pursued this line of research, Professor Jambeck said, she has seen a strong, even visceral response from the public.
“You can see waste,” she said.
“Not that people want to.”