A large tanker carrying liquified natural gas (LNG) is set to become the first ship of its type to sail across the Arctic.

The carrier, Ob River, left Norway in November and has sailed north of Russia on its way to Japan.
The specially equipped tanker is due to arrive in early December and will shave 20 days off the journey. 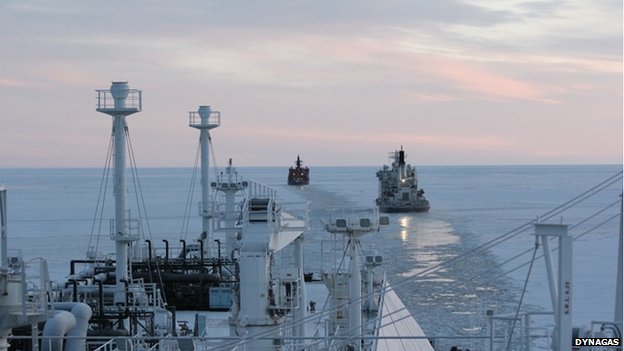 The tanker was accompanied by the Vaigach and 50 Let Pobedy nuclear-powered icebreakers during its nine-day voyage along the Northern Sea Route.
The tanker, which traveled in the Arctic at an average speed of 12.5 knots left the route on November 9 and is currently heading for the Japanese port of Tobata.

Built in 2007 with a strengthened hull, the Ob River can carry up to 150,000 cubic metres of gas.
The tanker was loaded with LNG at Hammerfest in the north of Norway on 7 November and set sail across the Barents Sea.
It has been accompanied by a Russian nuclear-powered icebreaker for much of its voyage.
The ship, with an international crew of 40, has been chartered from its Greek owners Dynagas by the Russian Gazprom energy giant.

It says it has been preparing for the trip for over a year.
"It's an extraordinarily interesting adventure," Tony Lauritzen, commercial director at Dynagas, told BBC News.
"The people on board have been seeing polar bears on the route. We've had the plans for a long time and everything has gone well."

Mr Lauritzen says that a key factor in the decision to use the northern route was the recent scientific record on melting in the Arctic.
"We have studied lots of observation data - there is an observable trend that the ice conditions are becoming more and more favourable for transiting this route. You are able to reach a highly profitable market by saving 40% of the distance, that's 40% less fuel used as well." 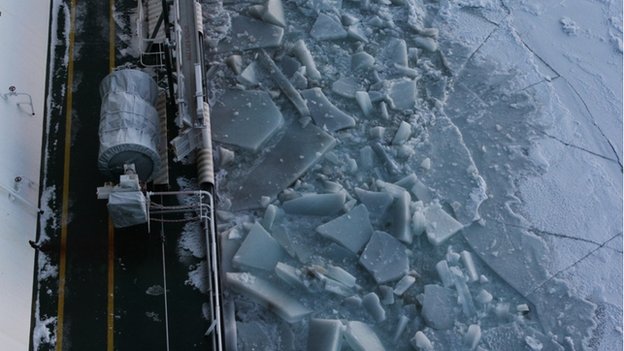 Despite the ice, the Arctic is navigable through November

But melting ice is not the only factor.
A major element is the emergence of shale gas in the US.
The Norwegian LNG plant at Hammerfest was developed with exports to the US in mind.
But the rapid uptake of shale in America has curbed the demand for imported gas. Meanwhile in Japan, in the wake of the Fukushima nuclear disaster, there has been a growing interest in alternative power sources, especially gas.
"The major point about gas is that it now goes east and not west," says Gunnar Sander, senior adviser at the Norwegian Polar Institute and an expert on how climate change impacts economic activity in the Arctic.
"The shale gas revolution has turned the market upside down; that plus the rapid melting of the polar ice."

He stresses that the changes in climate are less important than the growing demand for oil and gas.
"The major driver is the export of resources from the Arctic region, not the fact that you can transit across the Arctic sea."

Gazprom Marketing & Trading LNG carrier makes world’s first voyage via Northern Sea Route
According to Viktor Olersky, Russia’s Deputy Transportation Minister, the LNG tanker’s voyage marked another stage in the development of the new high-latitude sea route linking Europe with Asia-Pacific countries.
He said that Russia, which owns the world’s largest fleet of nuclear-powered icebreakers, opened a new page in the history of Arctic navigation.
“We proved the possibility of such voyages [of high-tonnage ships along the Northern Sea Route] and are not going to stop at this stage,” Olersky said.
He also said that experts will analyze data collected by Sovсomflot shipping company team during this experimental voyage in order to upgrade regulations of the Northern Sea Route navigation.

There is an expectation that because of changing climactic conditions, sea traffic across the northern sea route will increase rapidly. 2012 has been a record year both for the length of the sailing season and also for the amount of cargo that has been shipped.

But Gunnar Sander says there are limits to the growth and some perspective is required.
"Nineteen thousand ships went through the Suez canal last year; around 40 went through the northern sea route. There's a huge difference."