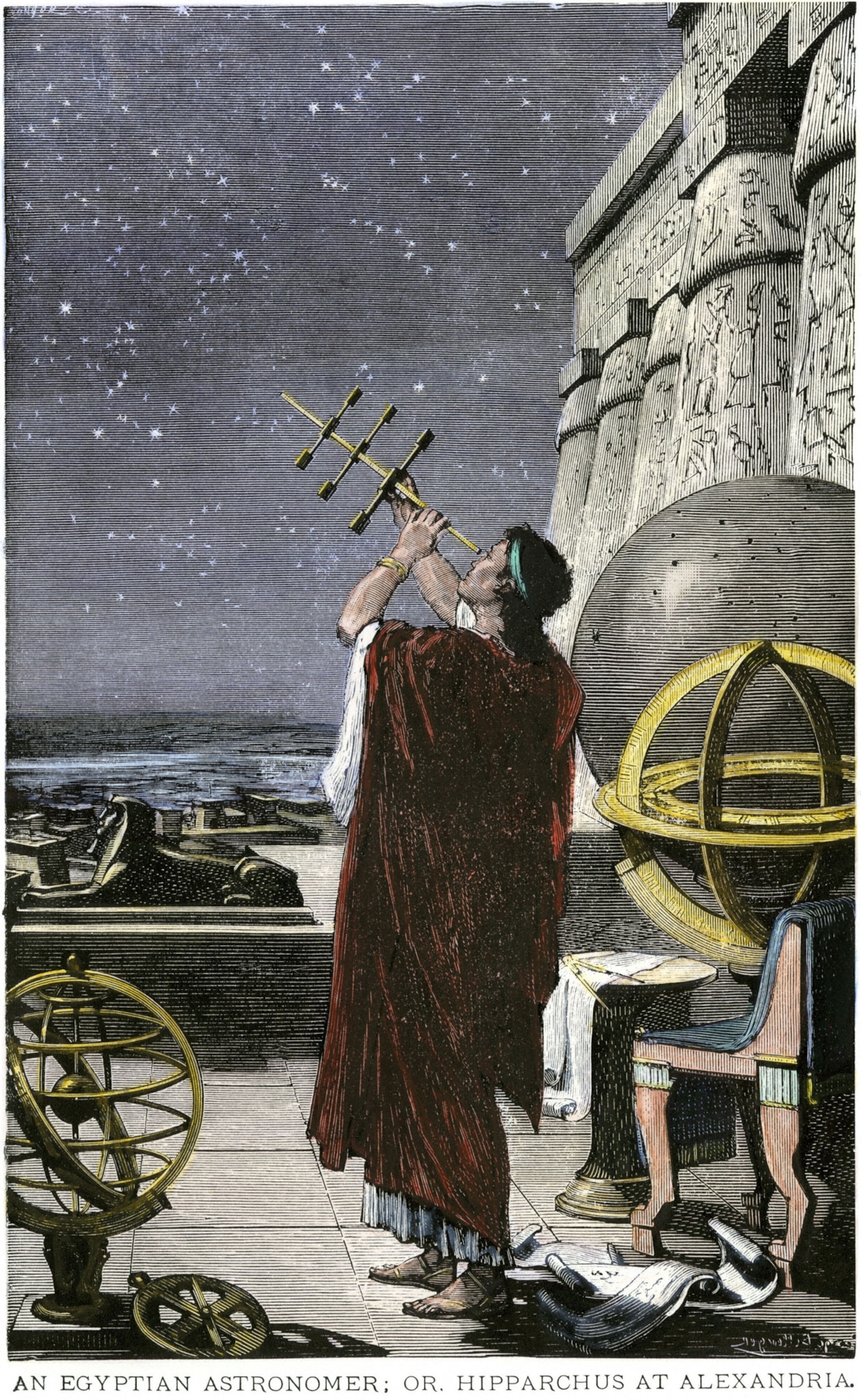 Some 2,200 years ago, the Greek astronomer Hipparchus helped establish a new way of understanding the motions of the stars that persists to this day.
By imagining Earth at the center of a celestial sphere, he used a coordinate system similar to latitude and longitude, which had recently been devised, to measure the precise positions of the stars.

“He was arguably the greatest ancient astronomer.
At least the greatest known to us by name,” says Victor Gysembergh, a science historian at the French National Center for Scientific Research.

Many ancient Greek scientists believed that Earth was literally at the center of the universe, and the stars and other celestial bodies rotated around it, although a model with Earth orbiting the sun was proposed in the 3rd century B.C.
Although this geocentric model is incorrect, the concept, which Hipparchus used to create the first known star catalog, is still used by scientists to map objects in the sky.

Hipparchus’s star catalog is the oldest known attempt to document the positions of as many objects in the night sky as possible, and it was the first time that two coordinates were used to pinpoint each object’s location.
But that original catalog is lost to time, and we know of it only thanks to the writings of later scientists such as Ptolemy, who created his own star catalog around 150 A.D.
and attributed an earlier one to Hipparchus.
Until now, the oldest evidence for stellar coordinates from Hipparchus was an 8th-century A.D.
Latin translation of a poem about the constellations that includes the coordinates as a kind of annotation.

Gysembergh and his colleagues recently revealed even older evidence of star coordinates from Hipparchus in a 5th- or 6th-century A.D.
Greek version of the same poem, Phenomena, originally written by the Greek poet Aratus in the 3rd century B.C.
The poem, along with the accompanying star coordinates, had been erased from a reused medieval parchment and was recovered only through multispectral imaging, which uses different wavelengths of light to highlight the removed text.

These images of the manuscript that contains “erased” fragments of Hipparchus's star catalog show how multispectral analysis can be used to reconstruct hidden text.
The later Syriac text is in black, the Greek text revealed underneath in yellow.
COURTESY MUSEUM OF THE BIBLE COLLECTION.
ALL RIGHTS RESERVED.
© MUSEUM OF THE BIBLE, 2021.
The coordinates for the four stars to the farthest north, south, east, and west of the constellation Corona Borealis are included, though one of them could not be recovered from the manuscript.
They were found to be accurate to within one degree of modern values—a remarkable achievement for someone working about 1,700 years before the invention of the telescope.
Charting the stars with ancient tools

Though historians don’t know exactly how Hipparchus measured the stars, he may have used an armillary sphere, which is a mechanical device with rotating rings that represent the different parts of the celestial sphere, such as the celestial equator, an imaginary plane spreading out from Earth’s equator, and the ecliptic, or the annual path that the sun appears to follow through the sky.
Hipparchus may have also used a dioptra, which is a sight that could be attached to an adjustable platform. 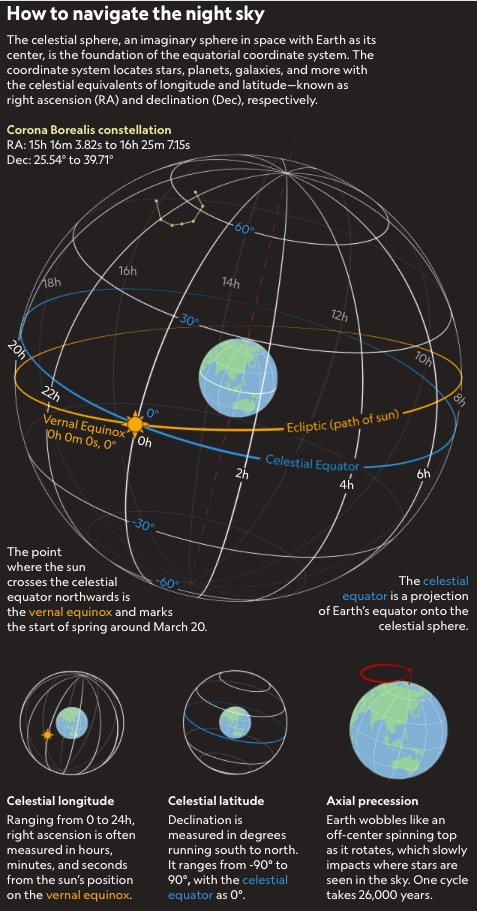 Ben Scott, NG Staff.
Source: NASA, International Astronomical Union
“The dioptra was a kind of surveying instrument,” says James Evans, a physicist and science historian at the University of Puget Sound in Washington State.
It “could be used for measuring angles for surveying operations, but you could imagine something like that being used also to measure angles of the sky.”
The armillary sphere, which takes its name from the Latin word for bracelet or arm band, is a sphere of concentric rings that could have sights on it.
“You could set this up and use it to measure angles.”

Hipparchus was likely influenced by the earlier work of Babylonian astronomers, who measured the distances of certain constellations from the ecliptic.
By tracking the movements of these zodiac constellations—the constellations that sit in a part of the sky that the sun moves through over the course of the year—the Babylonians could measure the seasons and predict astronomical events such as eclipses.

Combining the Babylonian practice of measuring and predicting the movements of the stars with Greek concepts of mathematics and geometry is considered the fundamental achievement of Hipparchus.
“Modern astronomy really comes from the merging of these two different approaches,” Evans says.
“The Greek approach based on geometry and philosophy of nature.
The Babylonian approach based on regular observation and in crunching numbers.”

The newly discovered coordinates represent only a small fraction of about 800 stars that Hipparchus is believed to have measured.
In total, only a few dozen coordinates survive that have been attributed to Hipparchus, but his work appears to be more accurate than Ptolemy’s later catalog.
“The sample size is admittedly small, so maybe there are errors elsewhere,” Gysembergh says.
“But as it stands, he’s more accurate than Ptolemy.”

The recent study compared the newly discovered coordinates to the values found in other sources, and they generally agreed, though some discrepancies exist, perhaps the result of different measurements or changes as the figures were transcribed through the ages.
Revealing a hidden text

The text with Hipparchus’ star coordinates is in a palimpsest, which is a document that has been written on and erased multiple times, with traces of removed writing often still detectable.
It’s part of the 10th- or 11th-century A.D.
Codex Climaci Rescriptus, a collection of parchments from St. Catherine’s monastery in Egypt with monastic writings in Syriac, an ancient language of West Asia.

The astronomical material was first detected in 2012, when biblical scholar Peter Williams at the University of Cambridge asked his students to study images of the Codex Climaci Rescriptus, and one of them, Jamie Klair, noticed the Greek writing visible beneath the Syriac text.
In 2017, the parchments were photographed with state-of-the-art multispectral imaging tools to reveal the text underneath more clearly.

Some of the documents revealed fragments of Aratus’s poem, transcribed on parchment that was later scraped clean and reused for the Codex Climaci Rescriptus.
The poem is accompanied by illustrations and mythological stories about the constellations.

In 2021, while poring over the multispectral images of the poem during lockdown, Williams noticed numbers that he thought must be star coordinates.
As it turns out, they were dimensions of the constellation Corona Borealis and the coordinates for its outermost stars, likely from the first astronomer to attempt to chart the entire sky.
Clues in the stars and parchments

Using a phenomenon called precession, which is the wobble of Earth on its axis as it rotates, the researchers were able to determine that the coordinates match the positions of the stars in Corona Borealis as seen from the island of Rhodes around 130 B.C., which is where and when Hipparchus is thought to have taken most of his observations.

Hipparchus may have been amused by this, as he was also the first scientist to describe the motion of precession.

What may not have amused the ancient astronomer is the appearance of his work alongside that of the poet Aratus.
Phenomena “was a best seller in antiquity, a schoolroom classic,” Gysembergh says, and the poem remained popular into Roman times.
Hipparchus, however, was not a fan—the astronomer’s only surviving work is a criticism of Aratus’ poem for the imprecise descriptions of the constellations.

“We lost everything of Hipparchus, we have only fragments, except his commentary on Aratus, because Aratus remains so popular,” says Francesca Schironi, a classicist at the University of Michigan who studies Hipparchus’ commentary on Phenomena.

This commentary, thought to have been written by Hipparchus after he created his star catalog, also includes coordinates for some of the constellations.
The 8th-century Latin version of Aratus’ poem known as the Aratus Latinus also contains star coordinates, which the new research helps confirm also likely came from Hipparchus.

Studying more pages of the Codex Climaci Rescriptus and of other palimpsests could reveal additional lost material.
Gysembergh believes that the new star coordinates were part of a book that included Phenomena and other writings that was brought to St.
Catherine’s and later disassembled so the parchment could be reused.
While star coordinates for only one constellation were found in the medieval palimpsest, the original book may have contained the coordinates for all the constellations in Aratus’ poem.

“These technologies of multispectral imaging have only been applied to a very small fraction of the extant palimpsests.
There are literally thousands and thousands.
A lot of them have completely unidentified content,” Gysembergh says.
“We can reasonably expect to have many more such discoveries in the years to come.”
Links :
Posted by geogarage at 1:04 AM