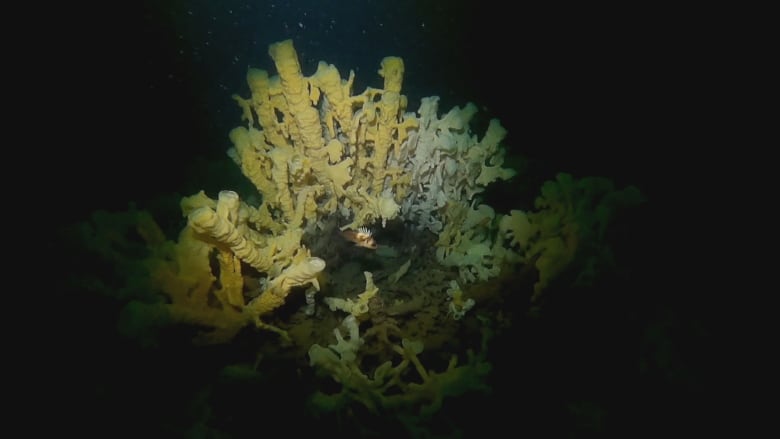 Glass sponge reefs can grow 20 to 30 metres high and serve as the habitat for a variety of fish.
UBC researchers say a compound derived from sea sponges found off the B.C. coast can block coronavirus infection in human cells.
(Glen Dennison)
From CBC

3 most effective natural compounds in catalogue of 350 were sourced in Canada, UBC team says

Researchers at the University of British Columbia say a compound derived from sea sponges found off the B.C. coast can block coronavirus infection in human cells.

The discovery could pave the way for the development of new COVID-19 medicines made from natural sources, researchers say.

An international team led by UBC scientists analyzed a catalogue of more than 350 compounds derived from natural sources that included plants, fungi and marine sponges in an effort to find new antiviral drugs to treat coronavirus variants.

Researchers bathed human lung cells in solutions made from the compounds and then infected the cells with SARS-CoV-2, the virus that causes COVID-19.
They found 26 compounds reduced viral infection in the cells.
The three most effective compounds were sourced in Canada: one from sea sponges collected in Howe Sound, northwest of Vancouver, another from marine bacteria collected in Barkley Sound on the west coast of Vancouver Island, and a third from marine bacteria in Newfoundland.

"These compounds blocked infection, so we cannot see more virus in the cells after a few days," said Jimena Pérez-Vargas, a research associate in UBC's department of microbiology and immunology.
Wastewater from some flights arriving at Vancouver airport to be tested for COVID-19
"They are very efficient because we need to use very small amounts of these compounds to block completely the infection of the virus in the cells."

Pérez-Vargas says the compounds are promising in that they target cells rather than the virus, blocking the virus from replicating and helping the cell to recover.
She says researchers are able to replicate the compound found in sea sponges so it won't be necessary to harvest them.

The peer-reviewed paper was published in the journal Antiviral Research.
'More work to do': researcher Pérez-Vargas says they are pleased with their findings "but we have more work to do."
She says the results have come at the cellular level and the next step is to test them on animal models.

Dr. Srinivas Murthy, an infectious diseases expert in UBC's faculty of medicine who was not affiliated with the study, says it's always exciting to find new molecules that could work against viruses. 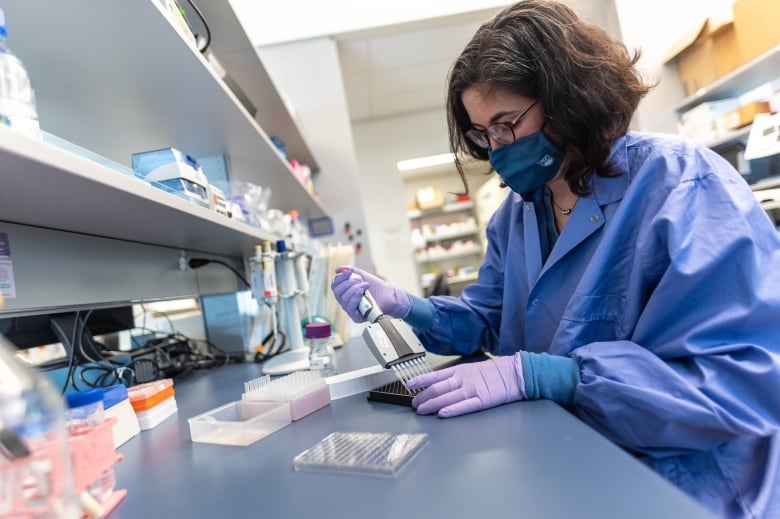 Dr. Jimena Pérez-Vargas of the University of British Columbia is the co-author of a study that says a compound derived from sea sponges found off the B.C. coast blocks some COVID-19 infections.
(Paul Joseph/The University of British Columbia)
"It's reassuring that there's still work being done in this space ... there's lots of things that we still have to learn about how COVID works and the possible therapeutics that are out there," Murthy said.

Even if the findings don't lead directly to a treatment for humans, it could help scientists better understand the disease, he says.
"Scientists from around the world can see this paper and think, OK, I have something similar, let's adapt what we're doing and build toward something that could work for everybody," he says.

The study notes that natural products are "considered a rich resource for novel antiviral drug development" and "have the advantage of more favourable toxicological profiles, fewer side effects, and a faster approval process in comparison to chemically engineered drugs."

Murthy says the study speaks to the importance of "maintaining biodiversity because there's so many medicinal products that exist out there in the natural environment."

The antimalarial drug Artemisinin, for instance, was extracted from sweet wormwood. Farnesol, which is found in fruits and herbs, is being studied as a potential treatment for Parkinson's Disease.
"I think the ability to find new medicines is truly exciting," he said.
Links :
Posted by geogarage at 1:52 AM