Global Fishing Watch: Raising awareness of the impacts of overfishing 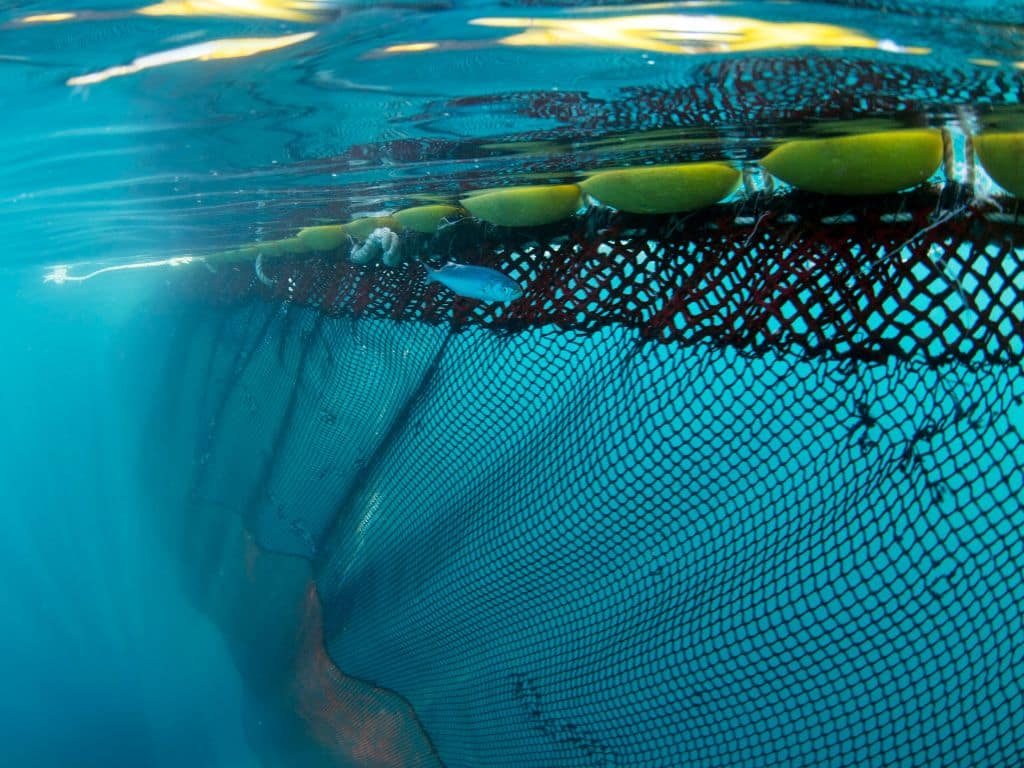 From Earth.org by Pamela Ferrris-Olson
As 8% of humans depend on the world’s oceans to supply their food, detailed information is needed to adequately maintain a sustainable worldwide fishery.
Non-profits like Global Fishing Watch and The Outlaw Ocean Project are helping raise awareness of the impacts of overfishing and overcome the challenges of data collection from the vast marine realm to provide reliable information on how and where the world’s oceans and fish stocks are being used and misused.

The world’s oceans are a vast realm, on a scale that makes it far too time-consuming, too costly, and too dangerous for any single entity to manage.
The result is that the high seas are poorly understood and under-protected.
Detailed information about the scope and whereabouts of fishing is often lacking.
Even a determination of what entity has the jurisdiction for enforcement is difficult to determine.

The Work of The Outlaw Ocean Project and Global Fishing Watch

The Outlaw Ocean Project is a non-profit journalism organisation based in Washington D.C.
that produces the Outlaw Ocean podcast, a riveting, first-hand account of the problem.
The seven-part series relies on more than eight years of reporting covering all seven oceans and more than three dozen countries.
The Dark Fleet, the second episode, tells the story of a search for one of the most wanted illegal fishing vessels.
The pursuit lasting 110 days, across 10,000 nautical miles documented the vessel’s illegal activities catching Chilean sea bass in the waters off Antarctica.
Not only was fishing occurring in waters not open to commercial fishing, but it also involved gillnets, a banned type of fishing gear.
One net over 45 miles in length took over 100 hours to haul in.
The story, rather than being an unusual occurrence, is one that is simply rarely documented due in part to the lack of data on fishing fleets that sail the high seas.

Global Fishing Watch (GFW) has been working to make such occurrences transparent so stakeholders can assess the extent to which the world’s oceans are being used and misused.
GFW is an open-access satellite and machine learning technology that provides map visualisations and data and analysis tools to better visualise the threats that the world’s oceans face nowadays.
The data identifies hotspots of previously heretofore unseen fishing vessels, making it possible to determine where and how much fishing activity is actually occurring. 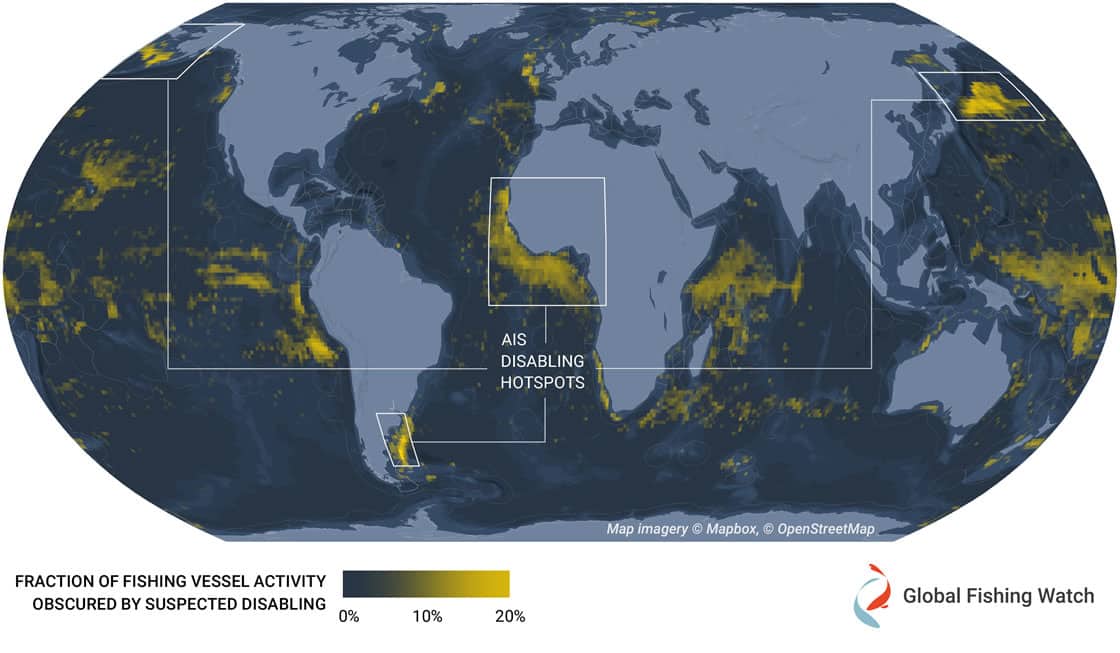 Jaeyoon Park (GFW) with colleagues reported in a 2020 Science Advances article that illegal, unreported, and unregulated fishing is a major challenge to assess because “most fishing vessels do not broadcast their positions and are ‘dark’ in public monitoring systems.”

These challenges are epitomised in the waters of North Korea, South Korea, Japan, and Russia where stocks of Japanese flying squid (Todarodes pacificus) are heavily targeted.
A lack of information about the fishery “prevents accurate stock assessment in a fishery where reported catches have dropped by 80% and 82% in South Korean and Japanese waters, respectively, since 2003.” This is troubling because squids are of critical importance to South Korea.
Here, they are ranked top seafood by production value.
In Japan, squid is among the top five seafood consumed and in North Korea, it was the third-largest exported product before sanctions were imposed.

The research utilised four satellite technologies to assess fishing operations.
Each of the technologies has limitations but, when used in combination, they provide sufficient data to present an informative picture of the scope of fishing activity.
One of these technologies is the Automatic Identification System (AIS), originally developed to reduce vessel collisions.
AIS equipment provides a unique identification for each vessel as well as information about its position, course, and speed.
It is possible to turn off a vessel’s AIS.
This allows the ship to operate undetected but, of course, leaves the vessel and its crew at risk of collision.

Visible Infrared Imaging Radiometer Suite (VIIRS) is another satellite technology that exploits the bright lights used to attract the flying squid.
Vessels measuring between 55 and 60 metres are equipped with lights that can emit light equivalent to a football stadium.
VIIRS’s utility is reduced by cloud cover.
Used in combination with satellite technologies, they can help “identify potential hot spots of illegal, unregulated, or unreported fishing.”

“Global fisheries have long been dominated by a culture of confidentiality and concealment and achieving a comprehensive view of fishing activities at sea is an important step toward sustainable and cooperative fisheries management,” the paper reads.

The biggest culprit in declining fish stocks is overfishing.
Episode 5 of The Outlaw Ocean podcast focuses on the African West Coast nation of Gambia and its fishmeal factories.
The three fishmeal factories in Gambia process local fish like Bonga into high-protein powder or pellets.
The fishmeal is shipped abroad and used to feed animals like livestock and farmed-raised fish.
An astonishing fact mentioned in the podcast is that “more than a quarter of all the fish pulled from the sea ends up as fishmeal.”

In Gambia, Bonga used to be plentiful, so much so that it was widely available for free in local markets.
The sharp decline in Bonga, however, has left communities without their daily source of protein.

Farm-raised fish were once thought to be a solution to the world’s need for protein.
The thought was that by farming fish there would be an equivalent reduction in pressure to harvest fish from the sea.
However, there has been a growing realisation that farm-raised fish generate their own problems.
Among them is pollution, a consequence of concentrating large numbers of fish – up to 200,000 – in a single pen.

Arguably the most troubling problem in raising fish is that more food energy is used than is produced.
Ian Urbina, American investigative reporter and founder of The Outlaw Ocean Projectobserved that some fish farms take in more fish in the form of fishmeal than they actually produce.
In the case of tuna, for example, “you can have a single tuna that will eat 15 times its own weight in fishmeal before it’s to the size that it needs to be put on the market,” he explains.
“So even conscientious consumers who are trying to be ethical buyers are quite likely eating fish that are taking food off of the tables of Gambians or others in the developing world.”

The economic reality is that fish-based feed is expensive.

“40% of the cost of raising a farmed fish is the feed,” writes Mark Kurlansky in The Guardian.
“Farming companies would like to reduce that by turning their salmon into vegetarians, but this is not easy because salmon have short intestines designed for digesting meat but not well-suited for plants.”
Why Is the Work of NGOs So Important?

The work of organisations like Global Fishing Watch and The Outlaw Ocean Project contributes knowledge useful in understanding the kind and extent of illegal fishing and overfishing.
Their work is an important contribution toward making informed choices for local, national, and international management of fish stocks and fishing fleets.
However, countless problems remain, and they are inherent in the management of a global marine commons.
Questions such as how or whether to manage fisheries and who might be utilising a resource at the expense of others are far more challenging to overcome.
Links :
Posted by geogarage at 1:55 AM