This $8 billion turtle-shaped yacht is not a joke

From AD by By Katherine McLaughlin
Poised to be the largest boat ever built, the ship is also, apparently, a floating city

Among many things that weren’t on our Bingo cards for 2022, a giant turtle-shaped yacht—which is also being described as a floating city—is certainly at the top of the list.
And yet, here we are. 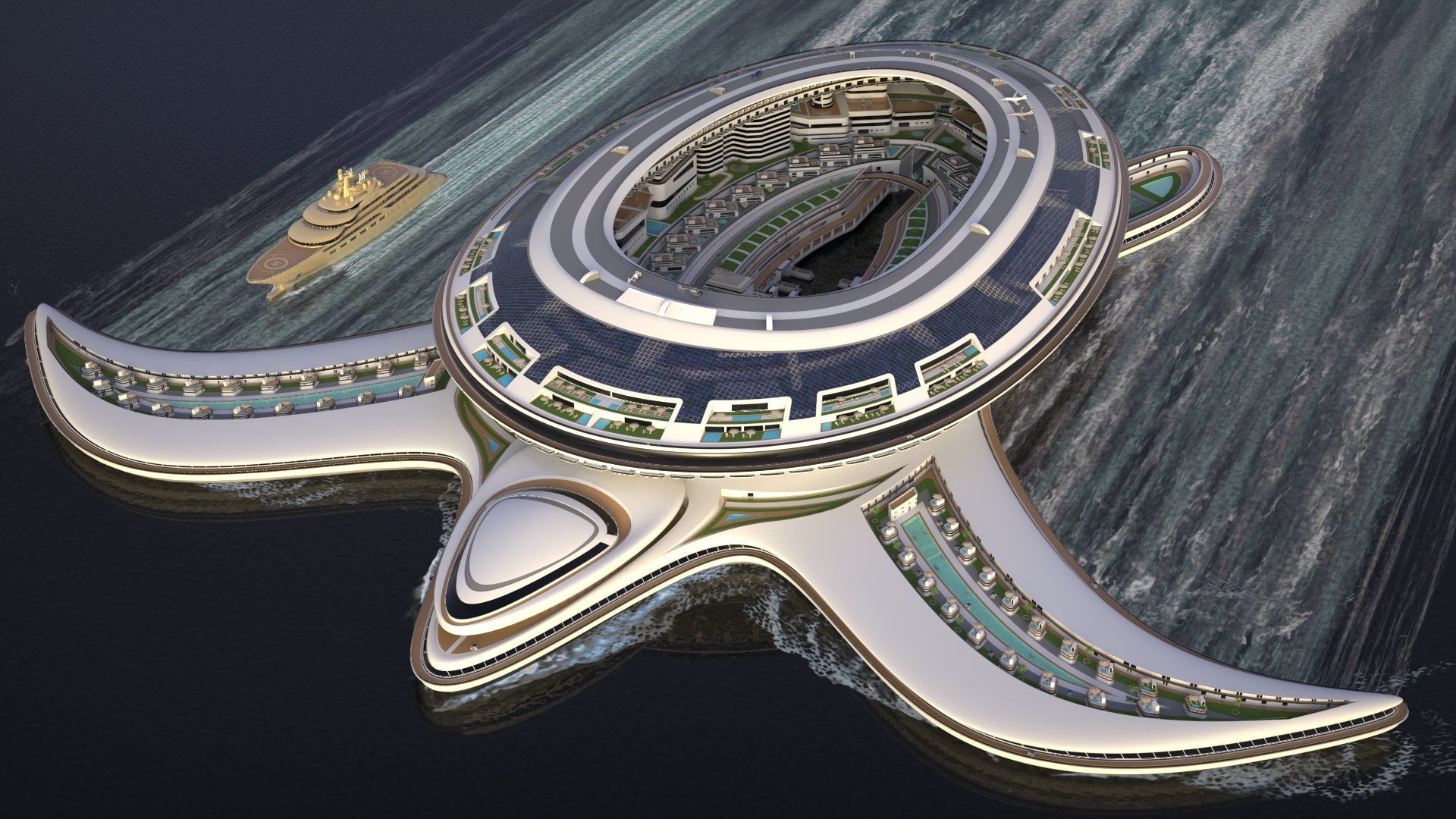 Pangeos, a turtle-shaped yacht, cruising through the ocean.
Photo: All photos courtesy of Lazzarini
As CNN reported, an Italian design firm, Lazzarini Design Studio, has drafted plans for a massive boat shaped like an oversized tortoise with outstretched flippers.
The vessel is so big that it’s not even being called a superyacht, but rather designers have described it as a terayacht.
As such, it was given an appropriately big name, Pangeos, a nod to Pangea, the ancient supercontinent that once incorporated almost all of Earth’s landmasses.
According to Lazzarini, the ship will be big enough to hold various hotels, apartments, condos, shopping centers, parks, and other amenities for up to 60,000 guests.
The yacht will even have ship and aircraft ports so guests can visit when Pangeos isn’t docked near land.
Which is helpful since, as of now, the company doesn’t foresee any strict itinerary, but rather expects the turtle to simply coast around the world. 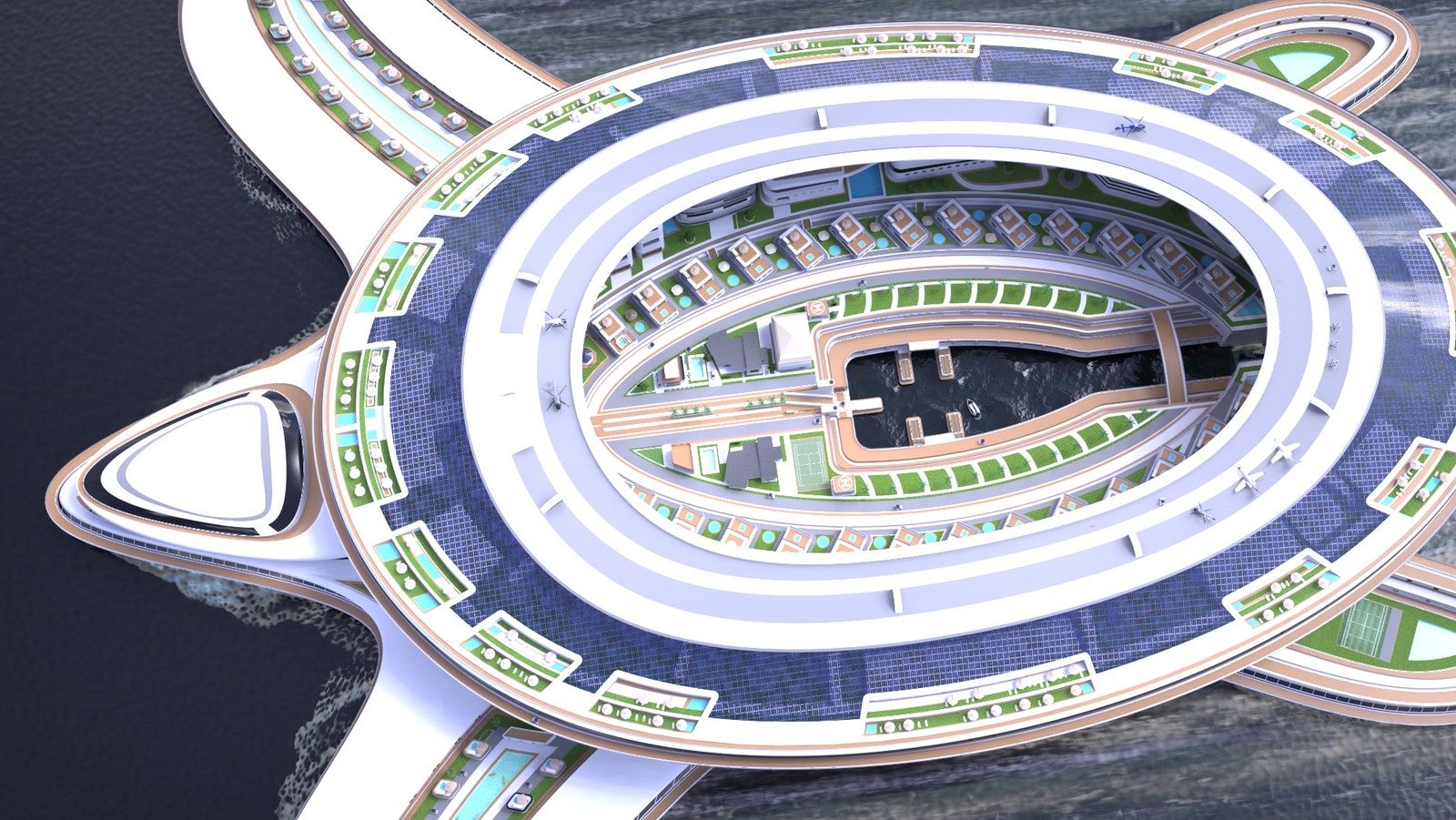 Many of the amenities and homes are designed around a central town square.
Extending 1,800 feet in length and measuring 2,000 feet at its widest point, the boat is poised to be the largest floating structure ever built.
That is, of course, if it does get built, which is a whole other obstacle in and of itself.
As the Pangeos website explains, “the terayacht needs a terashipyard,” which doesn’t currently exist.
The project requires a yard that is about 200 miles wide and 180 miles long, which also means dredging about 0.4 square miles of the sea with a circular dam.
Once the yacht is constructed, the dam can open, flooding the area and essentially launching the vessel.
Lazzarini has currently suggested the coast of Saudi Arabia as the ideal location for construction.

Since the goal is usually to minimize drag, boats don’t usually stray from the standard V shape—and are even less frequently formed like marine animals—but Pangeos’s flippers are more than just a peculiarity.
According to the company, the extremities will capture kinetic energy from the waves, which will allow the boat to cruise perpetually without emissions.
The rooftop area would also be equipped with solar panels for additional power, should it be necessary; electric engines are also included in the design. 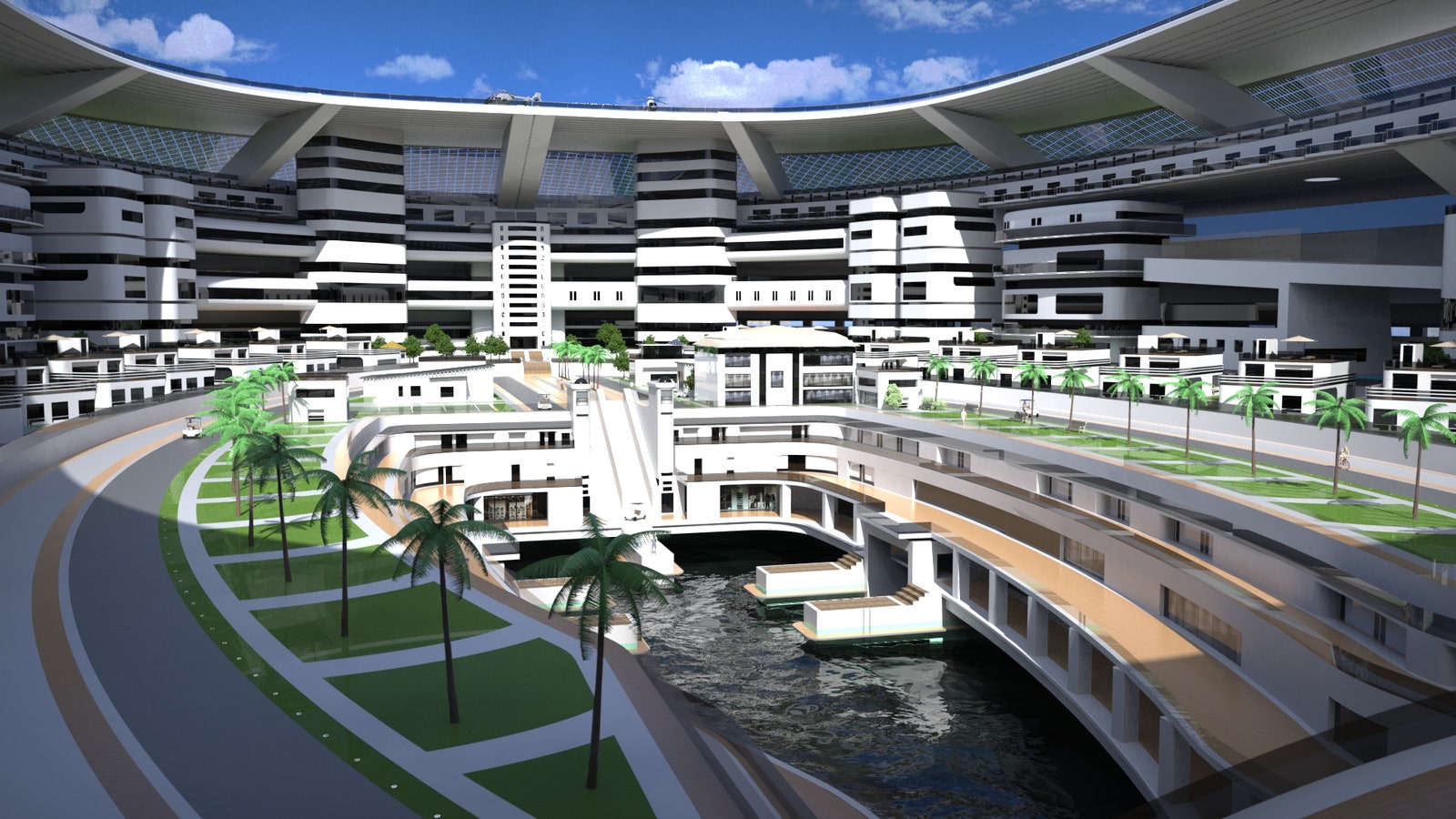 Within the terraced villa, guests can find houses, buildings, and rooftop terraces, with an upper zone that offers landing of various flying vehicles.
According to the firm, the total cost to build the massive vessel will be nothing short of $8 billion.
Construction will also take, at minimum, eight years, and Lazzarini doesn’t expect that this could even begin until 2025.
With a hefty price tag and decent wait time, the company has conjured a plan to alleviate both.
Designed as an NFT crowdfunding project, the firm is selling “Unreal Estate,” allowing interested buyers to purchase virtual boarding tickets, hotel rooms, and even houses for a metaverse version of the yacht, which the company says will be ready for (virtual) boarding by 2023.