Soft robot reaches the deepest part of the ocean

Self-powered soft robot developed by Chinese scientists reaches world’s deepest point
A bionic robot developed by Chinese scientists recently reached a depth of 10,900 metres (35,761ft) in the Mariana Trench, the world’s deepest point in the western Pacific Ocean.
The design mimics deep-sea snailfish, whose bones are finely distributed in a gel-like body to resist high pressure in the deep sea.
Researchers from Zhejiang University in Hangzhou used polymer to create a soft artificial muscle for the robot.
The self-powered autonomous robot operates on lithium batteries and comes with controlling chip circuits in its belly.
The achievement made the front cover of the prestigious scientific journal Nature on March 4, 2021.
From Nature by Cecilia Laschi & Marcello Calisti

A self-powered robot inspired by a fish can survive the extreme pressures at the bottom of the ocean’s deepest trench, thanks to its soft body and distributed electronic system — and might enable exploration of the uncharted ocean.
Writing in Nature, Li et al. report a robot made from soft materials that can brave the unexplored depths of the sea.
Remarkably, the authors demonstrate that their robot can operate in the Mariana Trench, the deepest part of the ocean.
Conventional underwater vehicles require watertight enclosures made of metallic materials to withstand the high pressures of the deep ocean — the thickness and dimensions of these enclosures have to be increased to cope with greater depths.
But in Li and colleagues’ robot, the delicate electronic components are embedded and distributed in soft silicone, a design that removes the need for pressure-resistant cases. 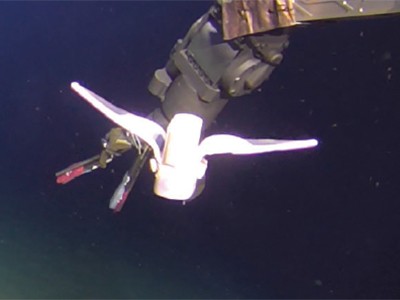 Read the paper: Self-powered soft robot in the Mariana Trench
Largely inspired by living organisms, the field of soft robotics involves making robots from pliable materials.
Polymers such as silicone are often used, as well as highly deformable structures such as braids and textiles.
Soft robots are intrinsically safer than their conventional rigid counterparts in interactions with humans, and their pliability can boost many capabilities — such as their dexterity when manipulating objects, and their ability to squeeze into tight spaces or to travel across uneven surfaces.
Marine species such as squid and octopus were one of the original inspirations for soft-robotics research2, but soft robotics, in turn, offers a new approach for tackling marine applications of robots.
Li and colleagues’ work is a powerful demonstration of this.

The authors’ robot is designed to have a fish-like body shape and two flapping side fins (Fig.
1).
The authors used a well-established mechanism to drive flapping.
The fins are attached to ‘muscles’ on the robot’s body; these are made of a soft material that converts electrical energy into mechanical work — when an electric current from the robot’s battery is applied to the muscles, they contract.
Tiny solid structures mechanically connect the contracting muscles to the fins, making them flap. 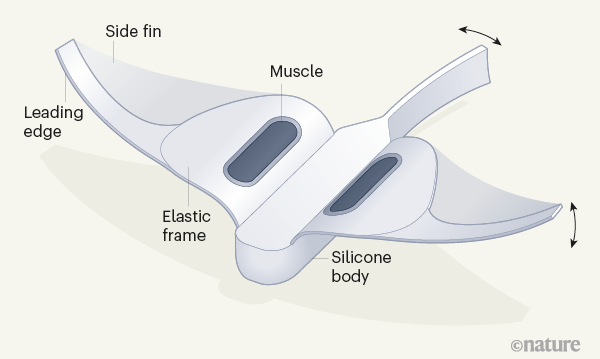 Figure 1 | Designed for the deep.
Li et al.1 have developed a robot made from soft materials that is designed to withstand the extreme pressures of the deep ocean.
The robot has a fish-like shape consisting of an elastic frame to which two thin flapping side fins are attached; the fins have leading edges made from a stiffer material.
‘Muscles’ on the frame are made of materials that convert electrical energy into mechanical work, and are attached to the fins (attachment structures not shown).
When an electric current from the robot’s battery is applied to the muscles, they contract.
The electronic components of the robot and the battery are embedded in the central silicone body; their distributed arrangement in the silicone protects them from high pressures.

One of the challenges faced by Li and co-workers was finding a way to protect the robot’s electronic components from high pressures.
Taking inspiration from the bones in the skull of the hadal snailfish (Pseudoliparis swirei), the authors spaced the electronic components apart, rather than packing them together as is typically done in electronic devices.
Laboratory tests and simulations demonstrated that this arrangement reduces the stress at the interfaces between components under pressure.
The distributed electronics were then embedded in silicone for incorporation into the robot.
This approach is more practical, and cheaper, than other methods for protecting the electronics in deep-sea devices.

Li et al. first tested the swimming ability of the robot in the laboratory, in a pressurized water chamber — the robot was connected to a pole, which it swam around in a circle.
The machine was then tested in a lake at a depth of 70 metres, where it swam freely at a speed of 3.16 centimetres per second, and then in the South China Sea at a depth of about 3,200 m.
It reached a speed of 5.19 cm s–1 (equivalent to 0.45 body lengths per second), which is in line with the capabilities of other soft robots3.
Finally, the flapping movement and pressure resistance of the robot were tested in the Mariana Trench, where it was connected to a conventional underwater robot for support, which also took images of the test. 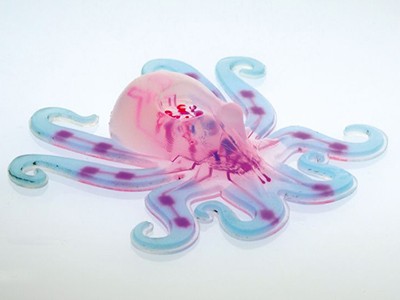 Generation soft
Several previous attempts have been made to develop soft robots for applications underwater — a realm in which it is challenging for robots to interact delicately with objects, because robotic sensors don’t work well in this environment.
Soft robotic grippers4 offer substantial advantages over rigid grasping devices when collecting and handling delicate sea organisms for study by marine biologists.
And bio-inspired soft robotic fishes5 can swim among other animals without distressing them, thereby allowing close-up study.
Li and co-workers’ research now pushes the boundaries of what can be achieved: the replacement of rigid protective enclosures for electronic components by distributed electronics embedded in a soft material paves the way to a new generation of deep-sea explorers.

There is, however, more work to do before the ocean can be populated with robots of this type of design.
Li and co-workers’ machine is slower than previously reported underwater robots6, and cannot withstand sizeable disturbances — it could easily be swept away by underwater currents.
Its locomotor capabilities will also need to be optimized for practical applications.
However, Li and colleagues’ approach lays the foundations for future generations of resilient and reliable deep-sea explorers.

In the long term, one can predict avenues of research being opened up for marine biology, in which soft robots safely navigate coral reefs or underwater caves, to collect delicate specimens without damaging them.
Swarms of underwater soft robots, with the ability to crawl on the seabed, anchor themselves on to specific structures, or swim over particular areas, could contribute to the development of technologies for various other applications.
These might include monitoring the ocean, cleaning up and preventing sea pollution or preserving marine biodiversity.
More fundamentally, they could help researchers to explore the vast uncharted depths of the oceans.