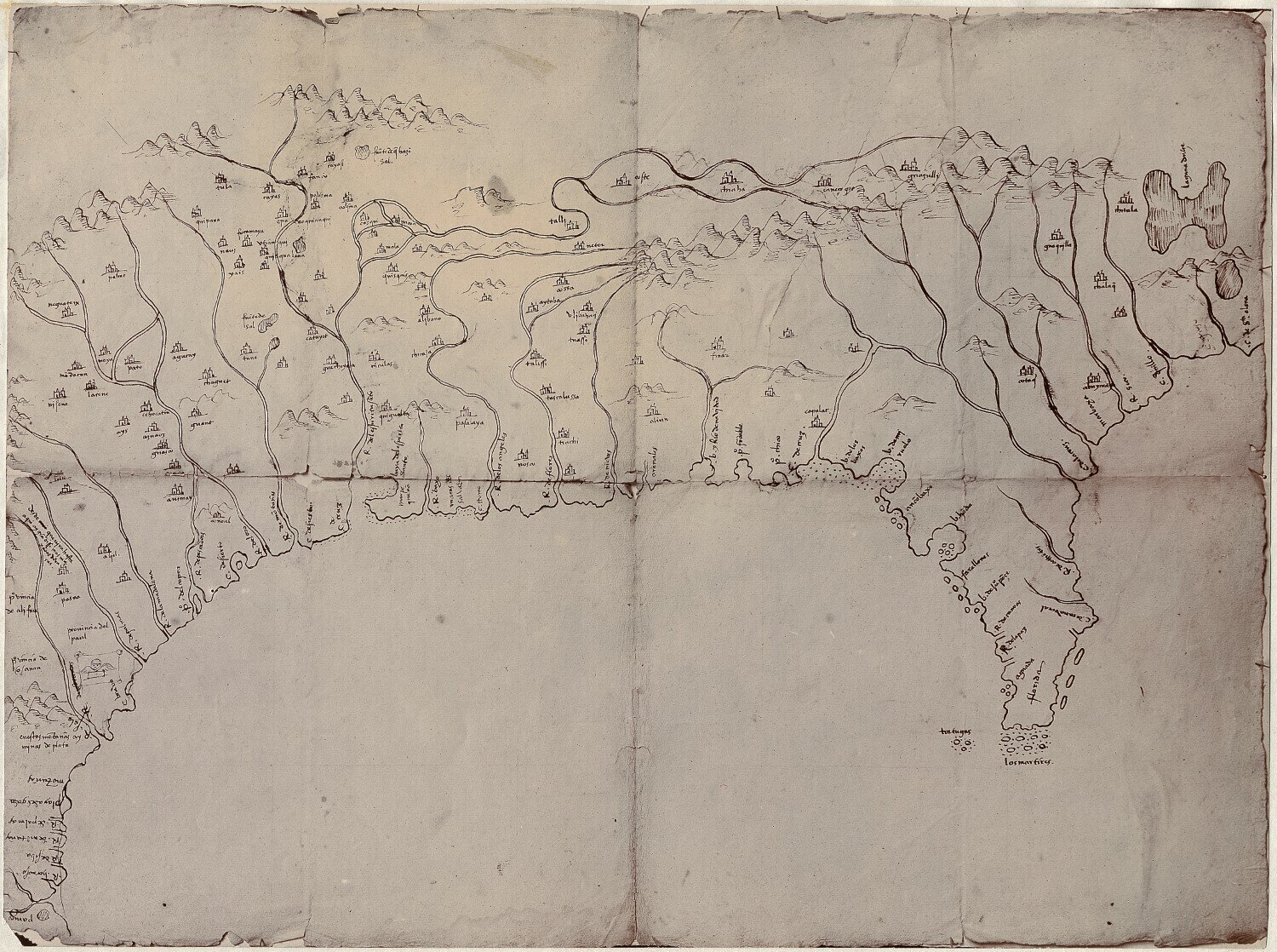 Sketch of the coast of the Gulf of Mexico, from Cape Santa Elena to the Pánuco River), attributed to Spanish Royal Cosmographer, Alonso de Santa Cruz, 1544, [AGI, MP-Mexico, 1].
Credit: Source: Archivo General de Indias, Sevilla.
From Phys by
The Isthmus of Tehuantepec, a region located in the south of Mexico, is the shortest distance between the Atlantic and Pacific oceans in all the country.
Only 220 kilometers separate the two oceans.

Current nautical raster chart from SEMAR in the GeoGarage platform
In the first half of the 16th century, Spanish conquerors put great effort into finding a strait that would connect the two oceans.
This meant that, in the conquest explorations of the 16th century, this region was used as an inter-oceanic passage, making approximately two thirds of the journey along the mighty river Coatzacoalcos and the rest overland. 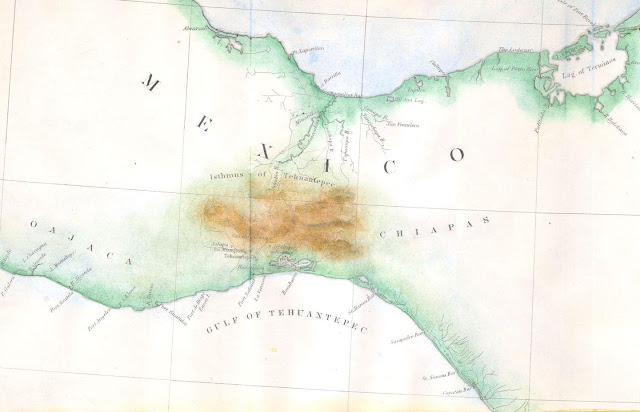 Map of the Straits of Florida and Gulf of Mexico.
To accompany a report from the U.S. Treasury Department to the U.S. Senate by Israel D. Andrews, per the resolution of the Senate of March 8, 1851.
This information is the result of the paper "The Map of the Coatzacoalcos River (1580): The First Cartography of the Isthmus of Tehuantepec," a study published in The Cartographic Journal and conducted by lecturer Manuel Morato Moreno, from the Higher Technical School of Engineering (ETSI); and emeritus professor José María Gentil Baldrich. 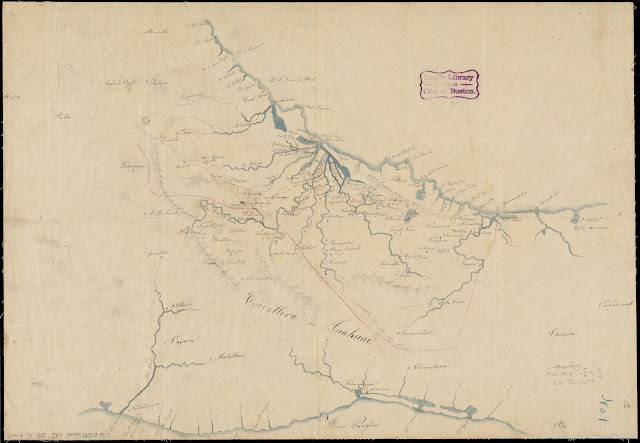 Manuscript map in ink covering the Tehuantepec Isthmus. (1800-1899)
Interest of the Spanish monarchy in the Isthmus of Tehuantepec
In 1580, the mayor of Coatzacoalcos received a mandate from the Spanish crown to discover different aspects of the overseas territories, such as the geography, topography, place names, indigenous languages, plants, etc.
He therefore commissioned a map to describe the geography of the region, indicating the geographic features, towns, and communication routes.
For this, he had the assistance of Francisco Gali, a Spanish sailor traveling across these lands on his way to the Pacific coast.

The exploration of this region between the "North Sea" and the "South Sea" had been, since the conquest of Mesoamerica, fixed in the minds of the Spanish monarchy and their representatives.
Charles V made this project one of the priority missions of the explorers whose objective was to connect the kingdom of New Spain with the kingdom of Peru.
Hernán Cortés also used it in 1520 to transport equipment, stores, and supplies. 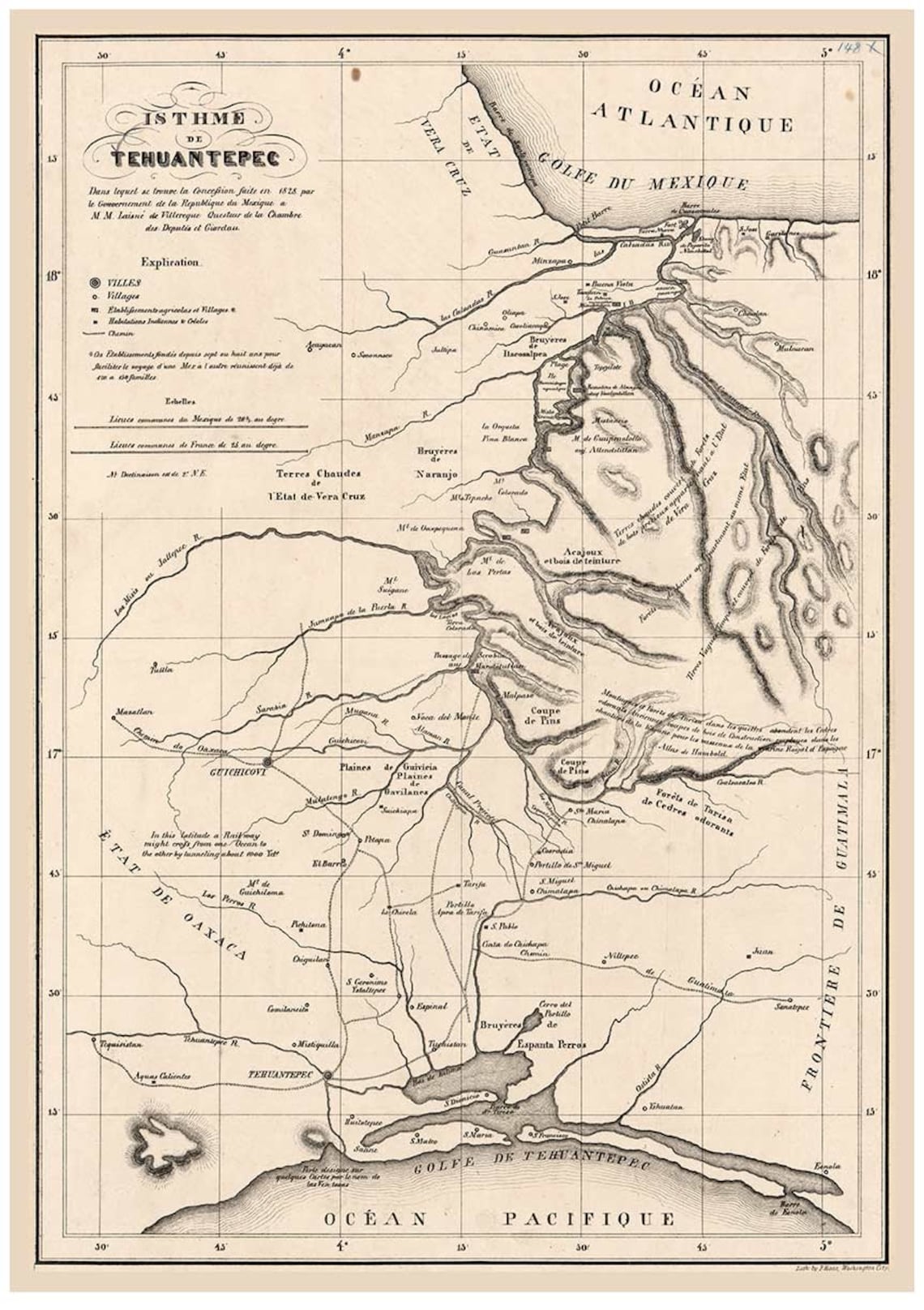 An analysis of the map suggests that it was made in haste.
Both the errors in distances and the numerous corrections which can still be observed support this conjecture.
It seems that Francisco Gali was more interested, from his point of view as an explorer and navigator, in the most important aspect of the region: the possibility of connecting the North Sea and the South Sea through the Strait of Tehuantepec.

Francisco Gali, born in Seville in 1539, is a singular enigmatic character.
Barely any information exists about him prior to his appearance in America.
n spite of the few maps discovered that were drawn by Gali (two signed and a third attributed to him), the historic documents refer to him not only as an expert mariner, but also as a skilled cartographer and cosmographer.
Links :
Posted by geogarage at 1:53 AM