‘If I don’t end up in intensive care, it’s a bonus’: the beauty and pain of being the world’s best endurance swimmer 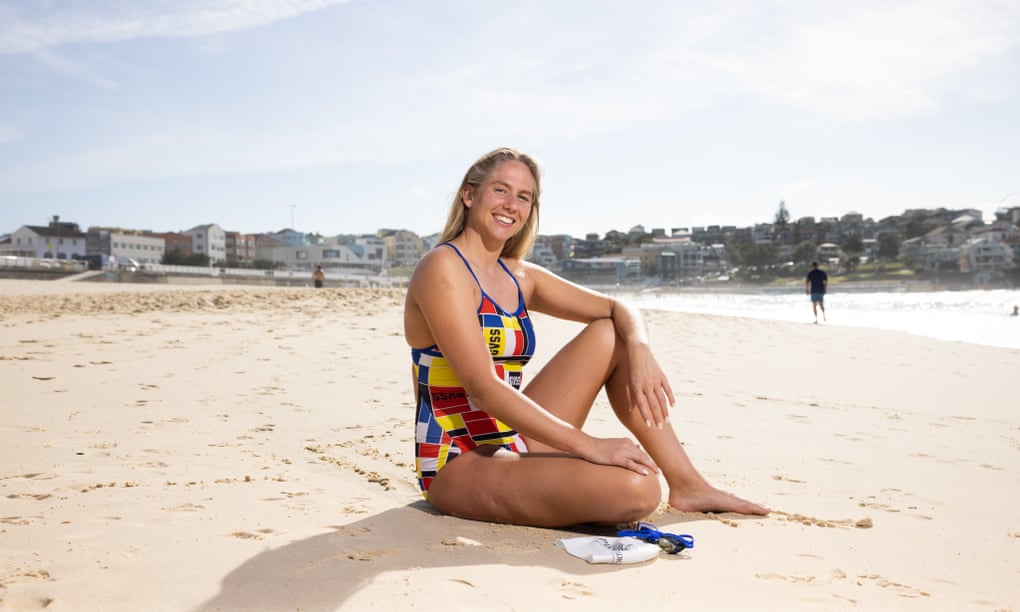 From The Guardian by Stéphanie Wood
From jellyfish in the Caribbean to hypothermia in the English Channel, swimming hasn’t been easy for Chloë McCardel – but can feel ‘so wild and free’

Chloë McCardel and I are going for an ocean swim at Bondi.
She dives into the foamy sea ahead of me – more slender mermaid than broad-shouldered Amazonian.
Knee deep, I feel the current suck at my flesh.
It’s not one of Bondi’s better days.
Chest deep, I realise I’m being dragged out and my very amateur ocean-swimming abilities are no match for this surf.
Panic rises.
McCardel is an impatient white-cap in the distance.
What was I thinking, suggesting a swim with superwoman?

By any objective measure, Chloë McCardel is also a crazy woman, her commitment to putting herself through demented levels of physical and mental torture almost inexplicable.
“I own crazy, I wear it as a badge of pride,” she tells me later. 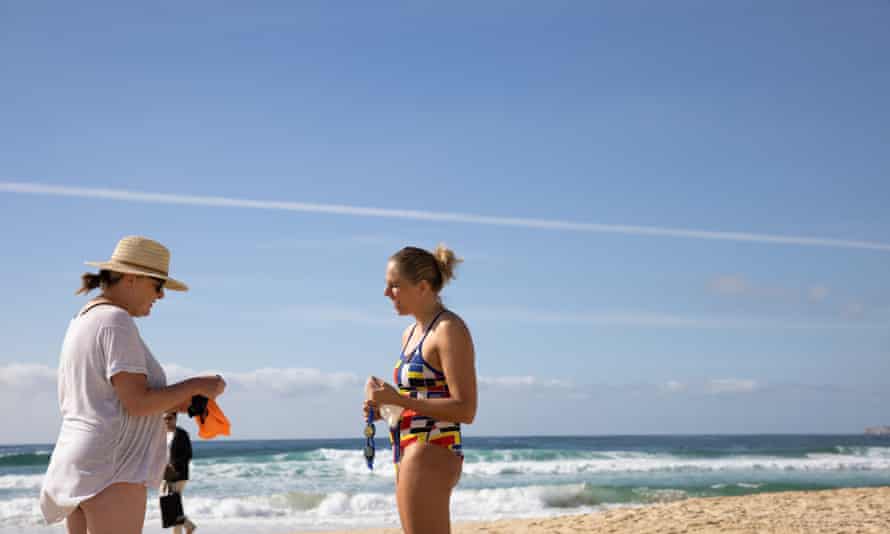 Stephanie Wood prepares to swim out into the Bondi surf with Chloë McCardel.
Photograph: Carly Earl/The Guardian
On 13 October, the 36-year-old Melbourne-born, Sydney-based ultra-marathon swimmer set a new world record, completing her 44th crossing of the English Channel in 10 hours and one minute.
She left the water, stood on a French rock at Pointe de la Courte Dune and raised her lanolin-smeared arms in victory.
McCardel’s 44 crossings of the world’s busiest shipping highway include three non-stop doubles (to France and back) and one triple non-stop (to France, back to England, then to France again).
The “King of the Channel”, Englishman Kevin Murphy, has done only 34 crossings.

McCardel has conquered other waters too: in 2014 she set a world record for the world’s longest non-stop ocean swim – 124.4km from Eleuthera Island in the Bahamas to the capital Nassau, a 41-hour, 21-minute journey. 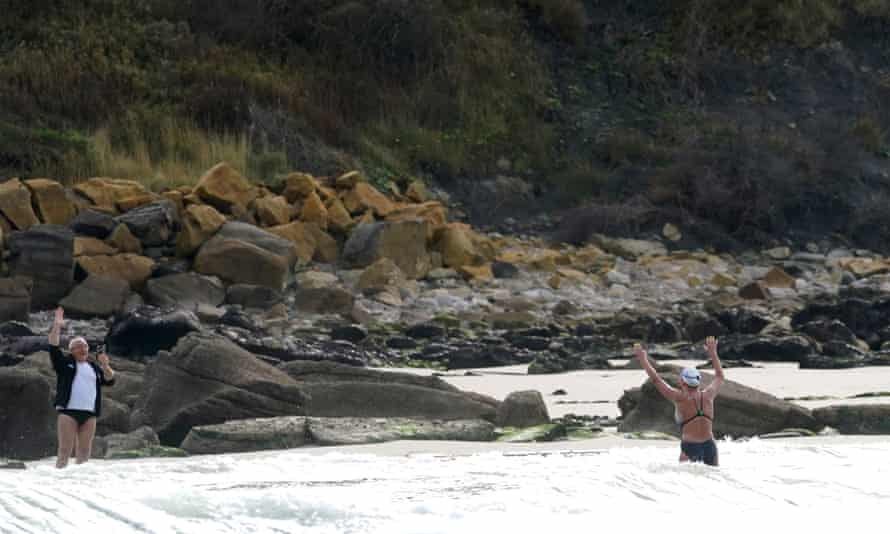 McCardel finishing her record-breaking English Channel swim.Photograph: Gareth Fuller/PA
But the bare numbers and facts hardly tell McCardel’s story.
There are good times when the sea is as smooth as a pane of glass, the water clarity is extraordinary, dolphins bounce around and she feels her technique is exquisite.
But things can go bad quickly.
In 2013 she jumped into the sea in Havana, Cuba, to attempt to be the first person to swim the 166km to the Florida Keys without a shark cage.

After about 10 hours of heavenly swimming, with 40 or 50 hours ahead of her, and dusk setting in, McCardel started seeing translucent shapes many metres below her.
“I’m like, ‘Oh, that’s interesting,’ and then literally like 10 minutes later, it was like a blanket underneath me just rising up and I’m like, ‘Oh this is not going to turn out well.’”
She was stung dozens of times by what is believed to have been a jellyfish similar to a box or irukandji.

Almost immediately, her right arm was paralysed and she could no longer use it to stroke.
She called to her support team to get her out but they did not realise the extent of the problem and shouted affirmations – keep going, you can do it.
In a marathon swim you never get out.
The jellyfish were still rising.
McCardel curled into a ball to reduce the surface area of her body.
“Once my head went under the water, they were like: ‘We need to get her out.’”

Twenty minutes or so after the first sting, she was hauled out of the water on to the boat.
“I was whimpering, I was making a dying animal noise and they were picking the jellyfish stings off me.
One person even pulled one out of my mouth like a bit of spaghetti.
I just wanted to die – the pain was horrific.”

So many other stories: the first time she attempted the Channel in 2009, she signed up for a double crossing and the captain of the support boat lost her for a time during a dark and stormy night when she was two-thirds of the way back to English shores.
“They drifted away and I was screaming out ‘Don’t leave me behind’ – I was terrified.”
She was battling two-metre waves and felt the ghostly presence of hulking ships which take a kilometre to come to a stop. 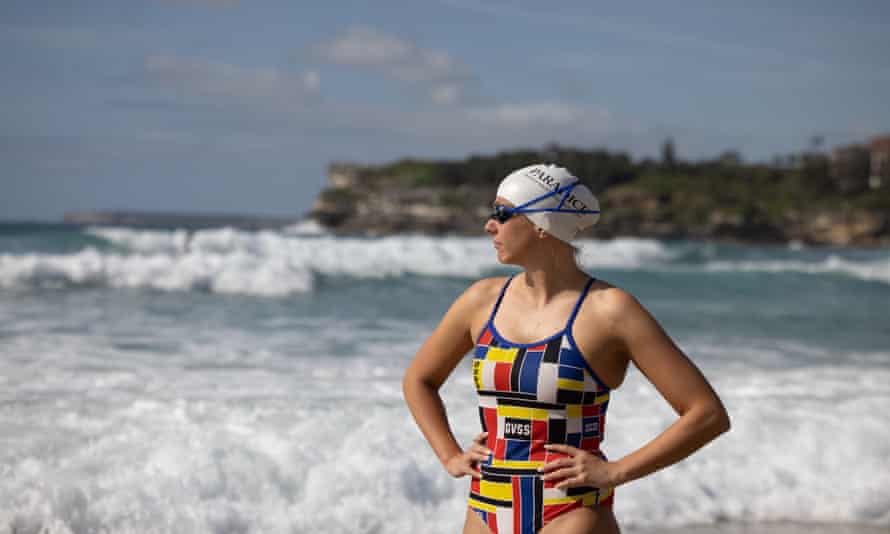 McCardel looks out over Bondi.
In cooler water swims, she has been told, she had been on the edge of death.
Photograph: Carly Earl/The Guardian
During her first attempt to triple-cross the Channel in 2011, the weather turned.
She was floundering, barely stroking with one arm and resisted her support crew’s attempts to get her out.
“My brain was not functioning.” When she was pulled out she couldn’t walk, was delirious and mumbling and dangerously hypothermic.
In intensive care at Canterbury Hospital, a doctor told her that 30 more minutes in the water and she would have been dead.

There are clues in McCardel’s childhood to the woman she would become.
Her role models – three older and sporty siblings – told her she could only play with them if she kept up.
“I wanted to be better at whatever game they were playing or I wanted to be like them and so I would push myself.” When she was about seven, she insisted on pedalling with her 14-year-old brother on his paper round.
He told her she couldn’t because she wouldn’t keep up.
“I’m like, ‘No, I will keep up, I’m coming.’”

Her parents were far from pushy and when she started to swim competitively as a teenager, they refused to take her to swim training at 5am (they agreed to pick her up afterwards).
On weekdays, a friend’s mother took her and on weekends she set her alarm for 3.15am and rode her bike 9km.
She remembers the day her mother came outside in a pink nightie and, unsuccessfully, tried to stop her pedalling off in the dark.
McCardel feared she’d be in trouble when she got home.
“Instead, my Dad’s like, ‘Right, we’re going to buy you some lights.’”

But McCardel’s times weren’t fast enough to get her into the national championships in the open category and her parents encouraged her to quit swimming to concentrate on her final two years of study.
After school, she went to Monash University to do an arts degree. 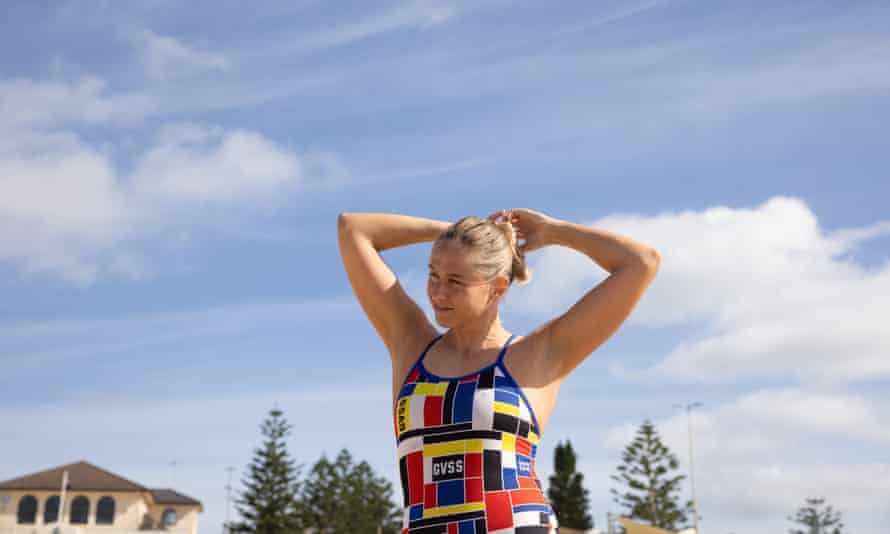 Chloë McCardel’s swimming career has not made her money.
Most of her income comes from coaching others to swim the Channel and motivational speaking.
(As a survivor of domestic violence, she also advocates for the criminalisation of coercive control.) Ahead of every swim, she runs fundraisers.
But the goal is the thing that pulls her forward: “I set scary goals and then I’m so petrified I get out of bed in the morning.”

She has set herself another scary goal: in 2022 she wants to be the first person in history to swim the 92km from England to Belgium through the stormy, frigid waters of the North Sea.
“The idea is to get to the other end before I die.
And if I don’t end up in intensive care, it’s a bonus.”

The Bondi surf that is making me panicky is like a soak in a bath for McCardel.
She strokes back towards me and, with no small amount of embarrassment, I tell her that I think we should grab a coffee instead.
No dramas, she says as we reach the sand.
As we towel off, she adds: “I don’t even like waves.”