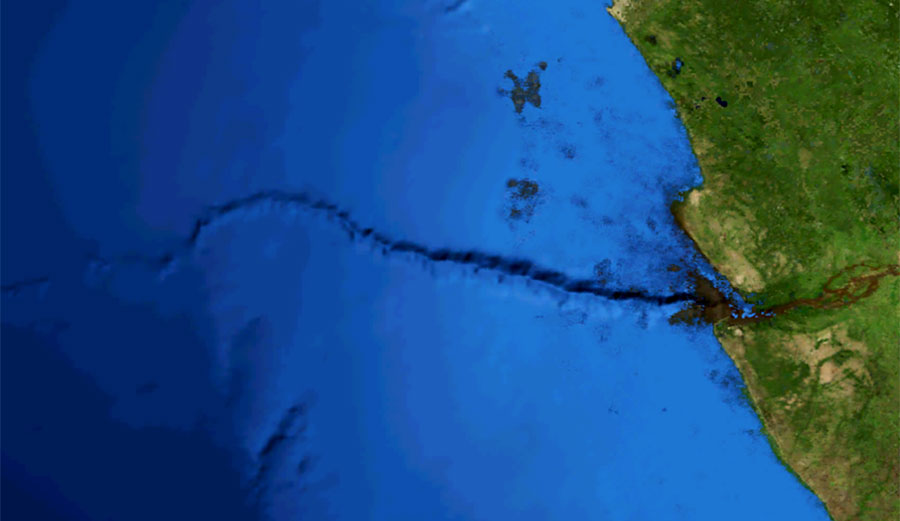 Satellite image of Congo Canyon in the Atlantic Ocean off the coast of Africa, where the largest sediment flow ever recorded occurred. Image: Wikimedia Commons
From Inertia by Alexandro Haro
On January 14, 2020, a swollen river full of sediment hit the Atlantic Ocean.
Some of that sediment started flowing down an underwater hill off the coast of West Africa.
Within hours, that flow had turned into what scientists believe is the “longest sediment avalanche ever measured.”
It continued for two straight days, moving some 700 miles across the floor of the Atlantic, finally slowing to a halt on January 16.
Before it stopped, it was measured moving at speeds up to 26 feet per second.
source : Britannica
An international team of researchers reported that the avalanche started from the mouth of the Congo River and moved into the Congo Canyon, one of the largest submarine canyons in the world.
When all was said and done, the avalanche reached down to a depth of nearly three miles.

Mooring locations in the Congo Canyon. (A) Map of the Congo Canyon showing study area (rectangle), with bathymetric contours in meters. (B) Map showing the location of the two moorings deployed in 2013 (6, 57). (C) Map showing location of 2010 mooring (5). (D) Cross-canyon profile showing ADCP suspended 85 m above the canyon floor. Location of cross section indicated in (C).
source : ResearchGate
“We had a series of oceanographic moorings that were hit by the event, which broke them from their seafloor anchors so that they popped up to send us an email,” Durham University’s Professor Peter Talling told BBC News.
“This thing gradually got faster and faster. Because it erodes the seabed as it goes, it picks up sand and mud, which makes the flow denser and even quicker. So, it has this positive feedback where it can build and build and build.”

According to IFLScience, one of the reasons behind the enormous slide could be flooding. “December 2019 saw a major flood of the Congo river, something described as a one-in-50-years event,” Dr. Alfredo Carpineti explained.
“In Kinshasa, the capital of the Democratic Republic of the Congo, the river was at its highest since 1963, with a discharge of 72 million liters (19 million gallons).”

How a turbidity current works. Image: NOAA/Wikipedia
That flooding hit the Congo estuary at the end of December, 2019.
Two weeks later, a turbidity current formed. A turbidity current is when a large amount of sediment increases the density of the water and it begins to flow downhill at a rapid rate.
Ten weeks after the first one formed, a second was created.
That happened to coincide with strong spring tides, and the team of researchers that looked into the event believe that may have been the spark that lit the proverbial dynamite.
Links :
Posted by geogarage at 1:05 AM