How to escape from a submarine stranded on the seabed

From Forbes  by David Hambling

This weekend searchers located the wreck of the missing Indonesian submarine KRI Nanggala-402 on the seabed off Bali, and confirmed that all 53 people on board were dead.
The time taken to find it, with the attendant countdown as the oxygen supply ran out, showed the need for submariners to rescue themselves from such incidents.
The submarine was reported missing on Wednesday 21st April after a torpedo-firing exercise.
Officials reported that it was possible that KRI Nanggala-402 had suffered a loss of power and had ended up on the sea bed.
On 22nd April, Yudo Margono, Chief of Staff of the Indonesian Navy, told the media that the submarine’s oxygen reserves were sufficient for three days.
That meant they would run out on Saturday 24th April. Even with nine Indonesian warships and help from Australian, Singaporean, Malaysian and Indian vessels, plus a U.S. Navy P-8 Poseidon patrol aircraft, the submarine was not located until the 24th and survival was doubtful.
Escape becomes more challenging the deeper a submarine settles. 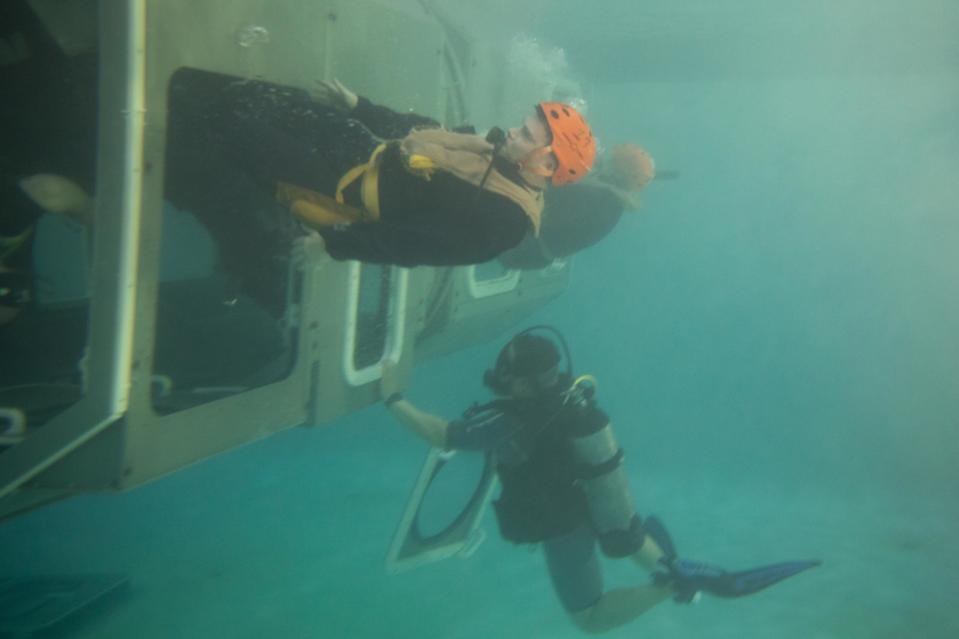 The Modular Amphibious Egress Trainer trains crew how to escape a submerged aircraft.
U.S. NAVY
The deepest unassisted submarine escape on record was by British submariner Bill Morrison in 1945 from a submarine sunk in Loch Striven in Scotland.
He made it out through an escape hatch from a depth of more than 200 feet.
Morrison surfaced bleeding severely from his nose, ears, and mouth and with pains in his head, neck and shoulders which persisted for years afterwards.
Modern submarine deep escape systems are effective down to a maximum depth of 600 feet.
To give an idea of just what that means, open water certification on scuba gear allows you to dive to 60 feet.
Advanced divers can go to 130 feet.
Professional divers can go below 200 feet with helium-based breathing mixtures to avoid nitrogen narcosis, and special decompression chambers.
Current U.S. Navy submarines are equipped with special air locks called escape trunks, each of which can release two survivors per cycle.
The survivors, wearing escape suits, enter the trunk and the lower hatch it closed.
Their escape suits are then inflated to high pressure for rapid buoyancy.
The trunk then fills with water, and the escapers are released rapidly to minimize their exposure to high pressure, ascending rapidly in their inflated suits, breathing normally.
(Video of escape trunks in use here) 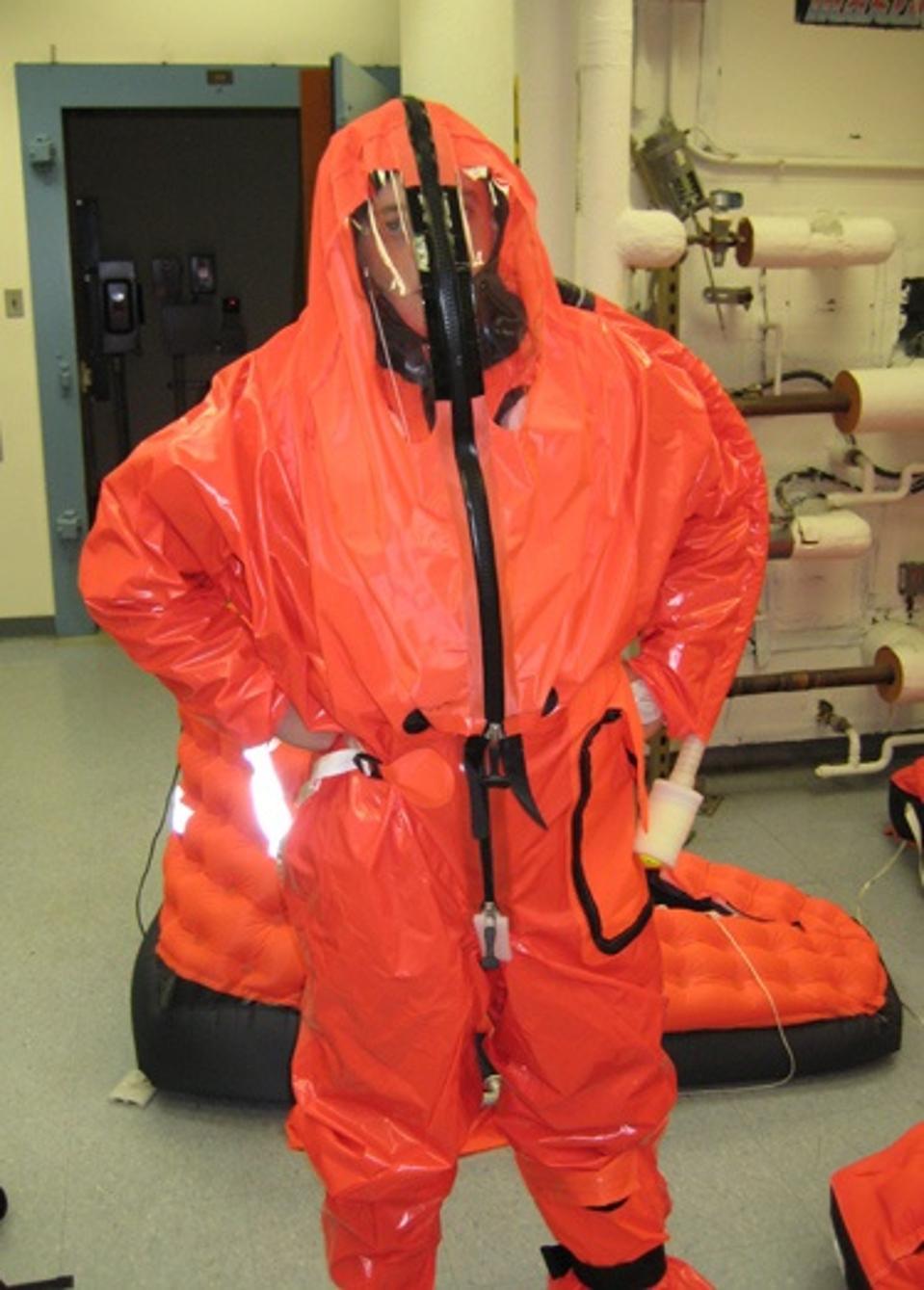 The Mk 10 MK-10 Submarine Escape Immersion Equipment designed by British company RFD Beaufort Ltd ...U.S. NAVY
On the surface the escape suit – technically Submarine Escape Immersion Equipment – becomes a life raft which also protects the wearer from hypothermia
The challenge is the rate of pressurization and how long a human can survive. In an 1987 exercise, 25 instructors carried out an escape from a record-breaking 603 feet.
The flooding takes 24 seconds.
“The pressure doubles every four seconds,” instructor David Wadding said in an interview afterwards. “ I can assure you at deeper depths (from 300 feet to 600 feet in 4 seconds) that this is an extremely traumatic experience.”
The ascent to the surface takes up to four minutes from six hundred feet.
While scuba divers with surface by stages, in the survival suit the ascent is rapid and uncontrolled. During the exercise there were several injuries, including perforated eardrums and ‘bends’ or decompression sickness in which nitrogen boils out of the bloodstream causing severe joint and bone pain. 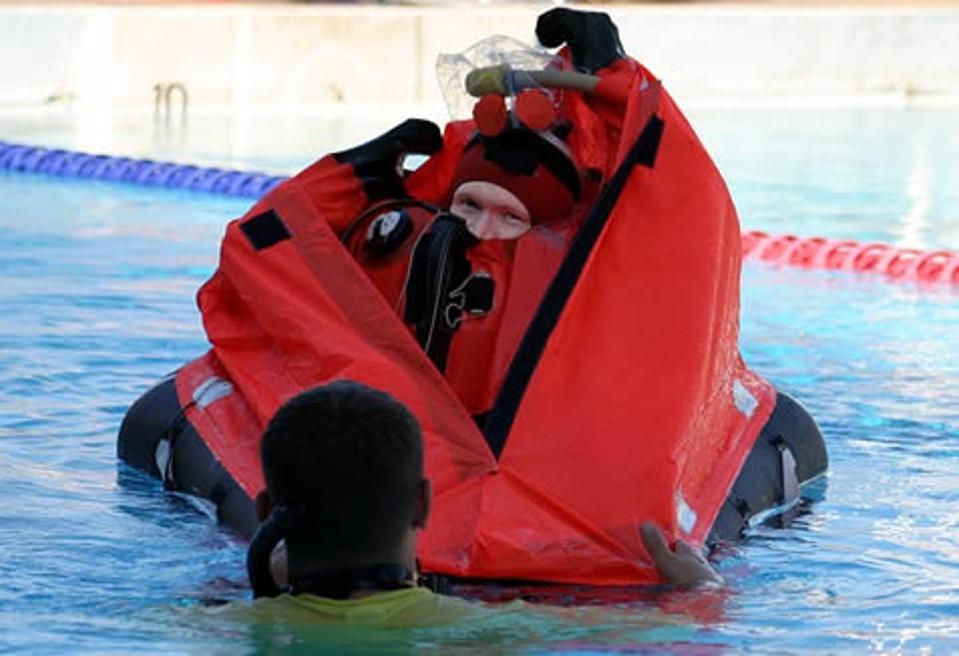 On the surface, the survival suit becomes a raft protecting against drowning and hypothermia
U.S. NAVY
The U.S. Navy is working on an enhanced Deep Escape System which would almost double the current maximum depth to over 1000 feet.
Perhaps the ideal deep escape methods would be something like an Atmospheric Diving Suit, effectively a one-man submersible which completely isolates the wearer from the surrounding water, and which are used for operations to 2,000 feet and below.
However, these suits are huge, and the project notes that stowage requirements with be a key factor, as space is highly constrained on a submarine at the best of times.
The actual approach is likely to involve a combination of techniques to reduce the physiological stress and upgrades to the escape hardware.
“Due to risks associated with human subject testing, all testing accomplished will be via modeling and simulation in a computer-aided or laboratory environment,” notes the project brief.
Surviving even brief periods of extreme pressure is challenging.
One possible exotic solution is liquid breathing: filling the escapers' lungs with an oxygen-saturated liquid which cannot be crushed by the pressure as gas is.
The technique was pioneered by both U.S. and Russian navy researchers in the 1970s and little information has been released.
Commercial diver Frank Falejczyk was the first man to breathe liquid; Falejczyk later gave a presentation which was seen by James Cameron who used the extreme diving technique in underwater actioner The Abyss.
The wreck of the KRI Nanggala-402 was found in almost 3,000 feet of water, too deep for even the proposed system, and the submarine may have broken apart before any escape was possible.
However, some images of the debris show escape suits, suggesting that the crew may have tried to deploy them.
When it comes to surviving the most desperate situation possible, anything is worth trying.
Links :
Posted by geogarage at 1:43 AM