All Over The Map: What happened to the ‘phantom islands’ of the San Juans? On an 1848 chart published by the US government, two islands -- Gordon and Adolphus -- appear northwest of what's now Orcas Island. (Library of Congress) What's now the San Juan Islands were envisioned as the "Navy Archipelago" by Naval explorer Charles Wilkes in the 1840s; two "phantom islands" appear on his 1848 chart, just north of what's now Orcas Island. (Library of Congress)
From MyNorthWest by Feliks Banel
Special thanks to Mike Vouri and Richard Blumenthal for their research assistance.

The San Juan Islands have long been a favorite summertime destination for tourists from close-by and far away, and many Northwest families are even lucky enough to own a cabin or other vacation property on Lopez, Shaw, Orcas, San Juan or one of the other smaller islands in the chain.
On a U.S. government nautical chart published in 1848, two such smaller islands appear, just north of Orcas, west of the community of Eastsound.
Gordon Island is the smaller and western-most of the two, and is maybe a third of a mile long; Adolphus Island is larger, and roughly a mile in length.
This particular chart was the work of U.S. Navy Lieutenant Charles Wilkes and the United States Exploring Expedition.
Wilkes led a group of naval vessels on a mission to explore and survey various locations around the world from 1838 to 1842.
Members of the expedition spent several months in 1841 in and around what are now Washington waters.
In the first half of the 1840s, the Oregon Country was jointly occupied by the British and the Americans, as details – and the international boundary – were slowly negotiated by diplomats in London and Washington, D.C.
Wilkes and company surveying the harbors and inlets here – and naming a lot of geographic features – was a way of making navigation safer, as well as a means of asserting future American possession of what had been Native land for millennia.
While the expedition achieved quite a bit – confirming the presence of a land mass in Antarctica and demonstrating American scientific can-do early in the Republic’s history – those achievements may have come at the expense of Wilkes’ reputation among many of his fellow expeditioners.
Apparently, Charles Wilkes was something of a stern taskmaster, and not necessarily beloved by the crew who were doing much of the critical survey work.
And, it’s theorized, somewhere along the line, some disgruntled member of the crew pulled a fast one that resulted in a major error when Wilkes’ published that 1848 chart. In 1853, American coastal surveyor George Davidson couldn't find any trace of Adolphus Island or Gordon Island where Wilkes' chart depicted them; however, Davidson's account wasn't published until 1858. (NOAA Archives)
The truth is, even though Gordon Island and Adolphus Island appear in print on Wilkes’ official government chart, those two islands simply didn’t exist, and never existed, anywhere besides on paper.
It’s not clear who first noticed the grievous error, but as early as 1853, another U.S. government surveyor – George Davidson, the man who named Fauntleroy in West Seattle after his future father-in-law – must have been among the earliest to figure it out.
Davidson wrote about Gordon Island and Adolphus Island in an 1858 Coast Survey publication, observing, “we examined the vicinity and satisfied ourselves that they did not then exist.”
Since KIRO Radio couldn’t just take George Davidson’s 168-year old word for it, two local experts were consulted to confirm the real story of the phantom islands.
Both Mike Vouri, former head ranger at San Juan Island National Historical Park and an expert on San Juan Islands history, and Richard Blumenthal, author, maritime historian, and expert on Charles Wilkes, confirmed that they have personally seen — with their very own eyes – and can attest that there are, in fact, no islands where Wilkes’ 1848 chart shows them to be.
How did the phantom islands make it into print, in a chart prepared by someone generally regarded as one of America’s premier surveyors, hydrographers and cartographers?

The Wilkes Exploring Expedition Map (1841).
The "islands" of Adolphus and Gordon are off the northwest tip of Orcas Island.
Map courtesy of Peter Fisher
It may have been that Wilkes was distracted; he had recently learned of the loss of one of the expedition’s ships, the Peacock, at the mouth of the Columbia River.
This meant less time to complete the survey work around Orcas Island – or what Wilkes called Hull’s Island, as part of a scheme to name the San Juans the Navy Archipelago, with major geographic features named after officers, ships and famous battles.
Some of Wilkes’ Navy-flavored names remain, such as Mount Constitution on Orcas Island, in tribute to Old Ironsides herself.
But distraction may have had only something to do with the error, because at some point in the past – as detailed in 1982 by the late writer and historian John Frazier Henry – suspicion fell on a member of the crew known as Passed Midshipman William May.
There’s no condemning evidence of the alleged hydrographic malfeasance, but there is plenty of proof that May and Wilkes did not get along – famously or otherwise – during the voyage.
Wilkes even had May court-martialed not long after the expedition returned to the United States in 1842. Modern navigation charts, such as this example from 1966, show no such islands as Wilkes had depicted in 1848.
(NOAA Archives) 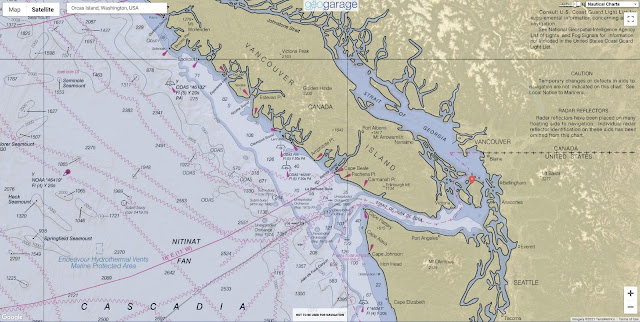 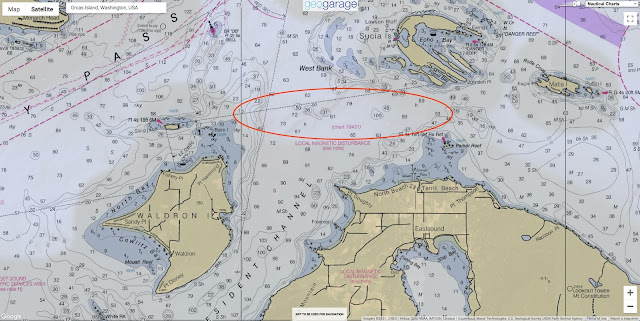 Localization with the GeoGarage platform (NOAA raster charts)
As for the names of the phantom islands, John Frazier Henry writes that “Gordon” may have come from William Lewis Gordon, a naval office Wilkes had served with earlier in his career.
The origins of Adolphus – meaning “noble wolf” – are a mystery.
If the error was intended as practical joke, whoever the practical joker was certainly was very patient, as seven years elapsed between survey and publication.
If the intention was to somehow embarrass Wilkes, John Frazier Henry couldn’t find evidence that Wilkes was ever made aware of the error, let alone if there was any fallout, professional or otherwise.
Bottom line, if you’re one of those unlucky Northwesterners who doesn’t own a getaway in the San Juans, whatever you do, no matter how great the price may be, don’t ever put down money for a cabin on Gordon Island or Adolphus Island.
Links :
Posted by geogarage at 1:05 AM