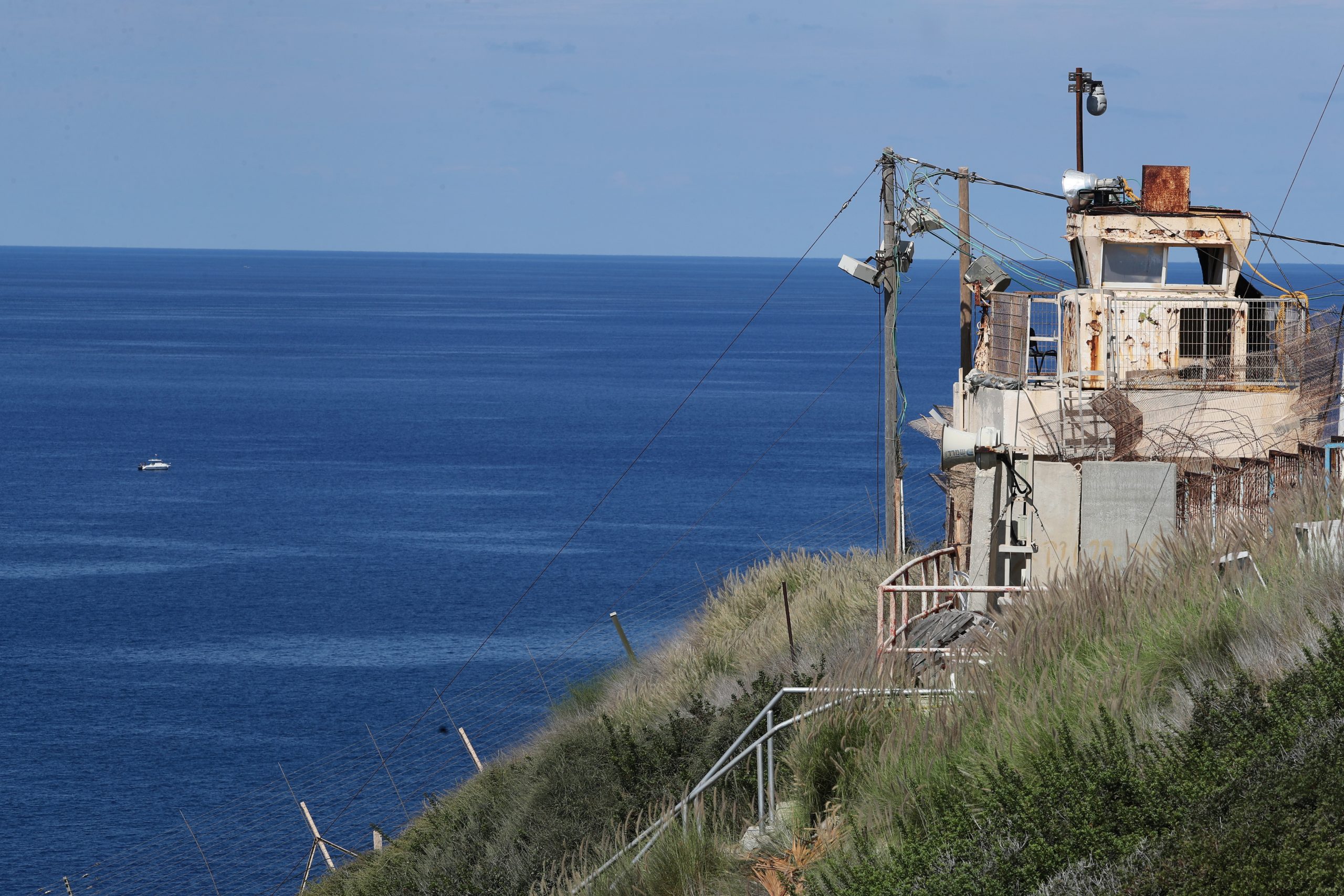 An Israeli military observation tower overlooking the Mediterranean Sea and part of the maritime border with Lebanon, is seen near Rosh Hanikra, in northern Israel October 13, 2020.
Reuters/Ammar Awad
From Atlantic Council by Udi Evental
After a decade of United States-led mediation, on October 14, delegations on behalf of Israel and Lebanon entered negotiations on the demarcation of their disputed maritime borderline.
These landmark talks were made possible following a framework agreement, of which details remain classified.
Two of the most significant obstacles on the long path leading to the negotiations were mediation and Beirut’s demand to couple together maritime and land border disputes.
Israel demanded that the US mediate while Lebanon was insistent that the United Nations (UN) lead the effort.
The dispute appears settled thanks to a formula that would place the talks under US mediation and UN sponsorship, therefore providing the UN with a meaningful role to play in the process. 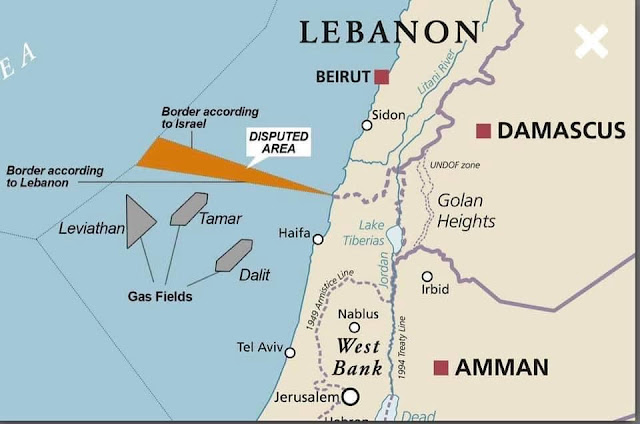 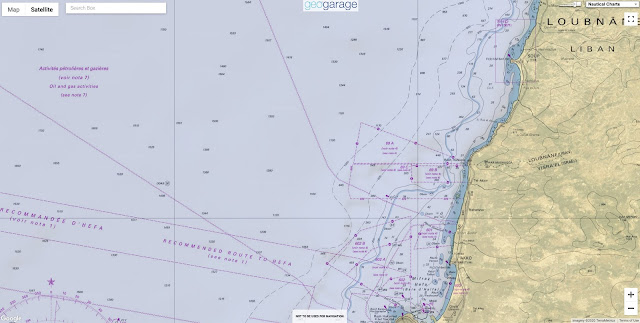 Israel-Labanon frontier with the GeoGarage platform (SHOM nautical chart)
The disputed borders
As far as the land border is concerned, it seems that the agreement was worded with constructive ambiguity, expressing hope for future progress on this issue.
The US Assistant Secretary of State David Schenker, who led the mediation efforts, encouraged both sides to renew the dialogue to solve the disputed points in separate track talks between the Lebanese Armed Forces (LAF), Israel Defense Forces (IDF), and UN Interim Force in Lebanon (UNIFIL).
Such discussions take place every couple of months as part of a trilateral mechanism established after the 2006 Lebanon War.
As it stands, there are thirteen disputed points between Israel and Lebanon along the international land border known as the “Blue Line,” which was mapped out by the UN—and to which Israel withdrew in 2000.
Most of these disputes are a result of scale problems originating in the 1949 Armistice Agreement map, upon which the UN-demarcated Blue Line was based.
While the Blue Line continues eastwards to the Golan Heights, Lebanese militant group Hezbollah claims that the area of Sheba’a Farms, located on the western slopes of Mount Hermon, is conquered Lebanese land.
This view runs contrary to the stance of the UN and Israel, who regard the area as territory that once belonged to Syria.
The land border dispute is somewhat connected to the maritime border dispute.
Regarding the latter, much of Israel and Lebanon’s focus is on two points between which the demarcation line is drawn: a land-based point of origin at Rosh Hanikra and the western most point out at sea (two hundred nautical miles from the coast).
Israel has delineated a line extending northwards while Lebanon’s line inclines southwards.
The result is a triangular-shaped disputed area covering some 860 km2, estimated to be rich in natural gas fields and oil reserves. 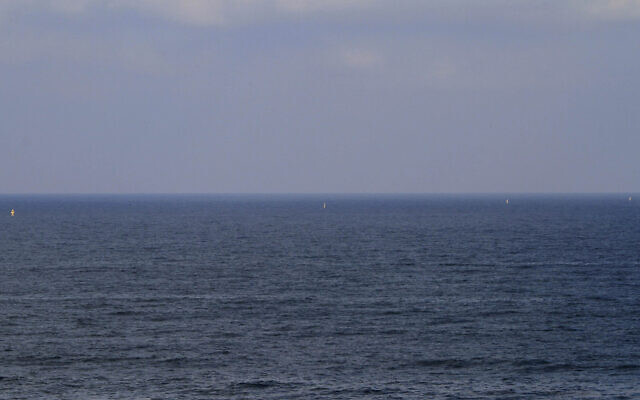 A line of buoys placed by Israel near the Lebanese-Israeli maritime border, which is not recognized by Lebanon and the UN, seen from the southern coastal town of Naqoura, Lebanon, July 23, 2010.
(AP Photo/Mohammed Zaatari)
Pushback in Lebanon
As opposed to Israel, kick-starting negotiations in October resonated strongly and caused a political storm in Lebanon.
On the one hand, some commentators applauded the framework agreement, regarding it as a practical expression of the recognition of Israel and expressing hope that it would be completed for the good of the Lebanese national interest.
On the other hand, proclamations made by Hezbollah’s leader, Hassan Nasrallah, and pro-Hezbollah news outlets, such asAl-Akhbar and Al-Mayadeen, were more noticeable.
They expressed stark opposition to any symbolic gestures that could imply normalization.
Similarly,Ibrahim Alamin, editor of the Al-Akhbar newspaper—which is closely associated with Hezbollah—claimed that consenting to conduct negotiations with Israel reflects unprecedented Lebanese weakness, which is liable to invite US pressure to differentiate the demarcation of the maritime and land borders once and for all.
Interestingly, against a background of calls in the Lebanese media to adopt tougher positions, the Lebanese delegation placed a demand at the table that almost doubled the disputed 860 km2 area that had been negotiated in the past decade.
Fearing the move might derail the talks, the US and UN sought to pressure Lebanese President Michel Aoun into returning to the original framework of negotiations.
The Hezbollah factor
The talks between Israel and Lebanon over the maritime border demonstrate that Hezbollah no longer vetoes such negotiations after preventing any breakthrough in the last decade.
As far as Hezbollah is concerned, negotiations that make a distinction between the maritime and land borders—including the question of Sheba’a Farms—weaken its image as the “defender of Lebanon” and undermine its already-eroded legitimacy to possess “the weapon of the resistance” outside state control.
Moreover, the US—Hezbollah’s arch enemy and that of its patron Iran—is the key mediator in the talks.
Hezbollah was forced to swallow these bitter pills due to the special circumstances in Lebanon, first and foremost, its economic collapse.
Hezbollah’s opposition to negotiations that would potentially funnel billions of dollars to Lebanon would have reinforced public allegations that the organization disrupts the country’s ability to rise out of the crisis.
This is especially so given its support of the corrupt sectarian system and its efforts to stonewall the French initiative to set up a reformative government in Beirut, which would pave the way towards international aid.
Hezbollah’s need to compromise reflects the damage to its internal status within Lebanon and a degree of erosion in its overall deterrent capability vis-à-vis Israel.
The latter is why it has been so determined to avenge the death of one of its operatives in Syria in July and to continue its efforts to carry out an attack against Israel along the border.
Despite the concession it has made, Hezbollah is working to restrict the Lebanese negotiation team.
The idea is to gain a position of influence and to guarantee some portion of its dividends if Hezbollah fails in derailing the negotiations and the two countries eventually reach an agreement.

It appears that most of the parties involved in the talks have an interest in their success.
Lebanon, much more than Israel, needs to resolve the dispute, as foreign companies currently hesitate to realize franchises or investments for exploration and drilling in the disputed area.
The extraction of the natural resources in the maritime border area will help Lebanon contend with the unprecedented crisis into which it has been plunged.
By doing so, it can limit its energy costs when faced with a collapsing electricity infrastructure, deal with the problem of air and environmental pollution, reduce its foreign debt—one of the highest in the world—and create jobs.

Israel’s potential profit could be mainly on a strategic level.
The negotiations—let alone an agreement—should reinforce stability with Lebanon and make it more difficult for Hezbollah to escalate the situation on the border.

The launching of talks is an important achievement for Washington, too.
The US has proven that it is still a significant player not only in the Gulf, but also in the Mediterranean, after its influence in Syria, Libya, and amongst the Palestinians has suffered setbacks in recent years.

Given these conditions, there is a chance that the negotiations could eventually make progress, even if they are expected to be long and arduous and, under certain circumstances, might become a hostage of the political instability in Lebanon.

In light of the extreme sensitivity attached to this issue in Lebanon, Israel must ensure that it conducts low-key negotiations.

Senior Israeli officials would do well to avoid making declarations regarding normalization with Lebanon or dwelling on the potential of any future Israeli-Lebanese cooperation, even if this entails profits for both sides (the conveyance of gas to Europe being an example).
It is also in Israel’s interest to maintain the trilateral track (IDF, LAF, and, UNIFIL) in parallel to the ongoing negotiations, and to try and use this framework to promote a solution to the disputed points along the Blue Line.