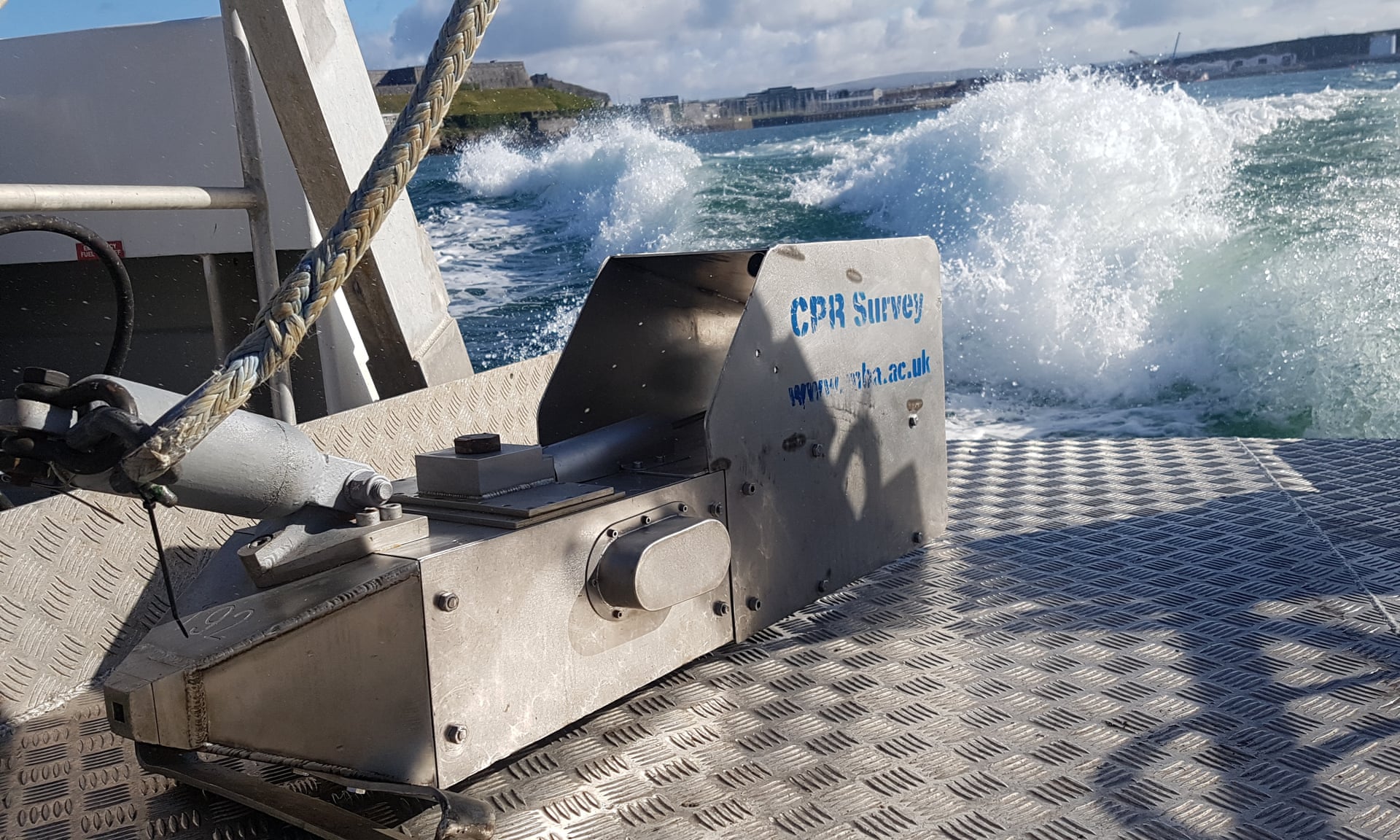 A metre in length, each continuous plankton recorder has a small aperture at the front for seawater to pass through.
All photographs : courtesy of the Marine Biological Association

From The Guardian by Anna Turns

Since 1931 ‘citizen scientists’ on ships have enabled data collection on the tiny building blocks of the sea.
Now this research could shape how we tackle the climate crisis

On a clear day, from their small, unassuming warehouse on the south Devon coast, Lance Gregory and Dave Wilson can see right across Plymouth Sound to the Eddystone lighthouse.
Today, they’re watching a ferry from Brittany, the Armorique, pull into dock.

Behind it, the ferry is towing a one-metre-long device shaped like a torpedo.
It doesn’t look like much, but it’s part of the planet’s longest-running global marine survey.

The device is called a continuous plankton recorder (CPR), and it’s one of 53 such devices that Gregory and Wilson manoeuvre using forklifts in their warehouse, surrounded by racks of distinctive yellow boxes and clipboards covered in spreadsheets.

They dispatch these CPRs in bright yellow boxes to “ships of opportunity” – ferries, cargo or container vessels that have agreed to volunteer for the mission.
Once a ship leaves port, the crew attach the device to the stern using steel wire, then toss it overboard.

Trailing along behind the ship, it collects data for the CPR survey.
The mission is vast but the subject is minuscule: plankton, the tiny organisms that drift in the ocean.
Every marine ecosystem relies on plankton for its basic food source, and it generates half the oxygen we breathe.
Perhaps more than any other organism, it is crucial to all life on our planet. 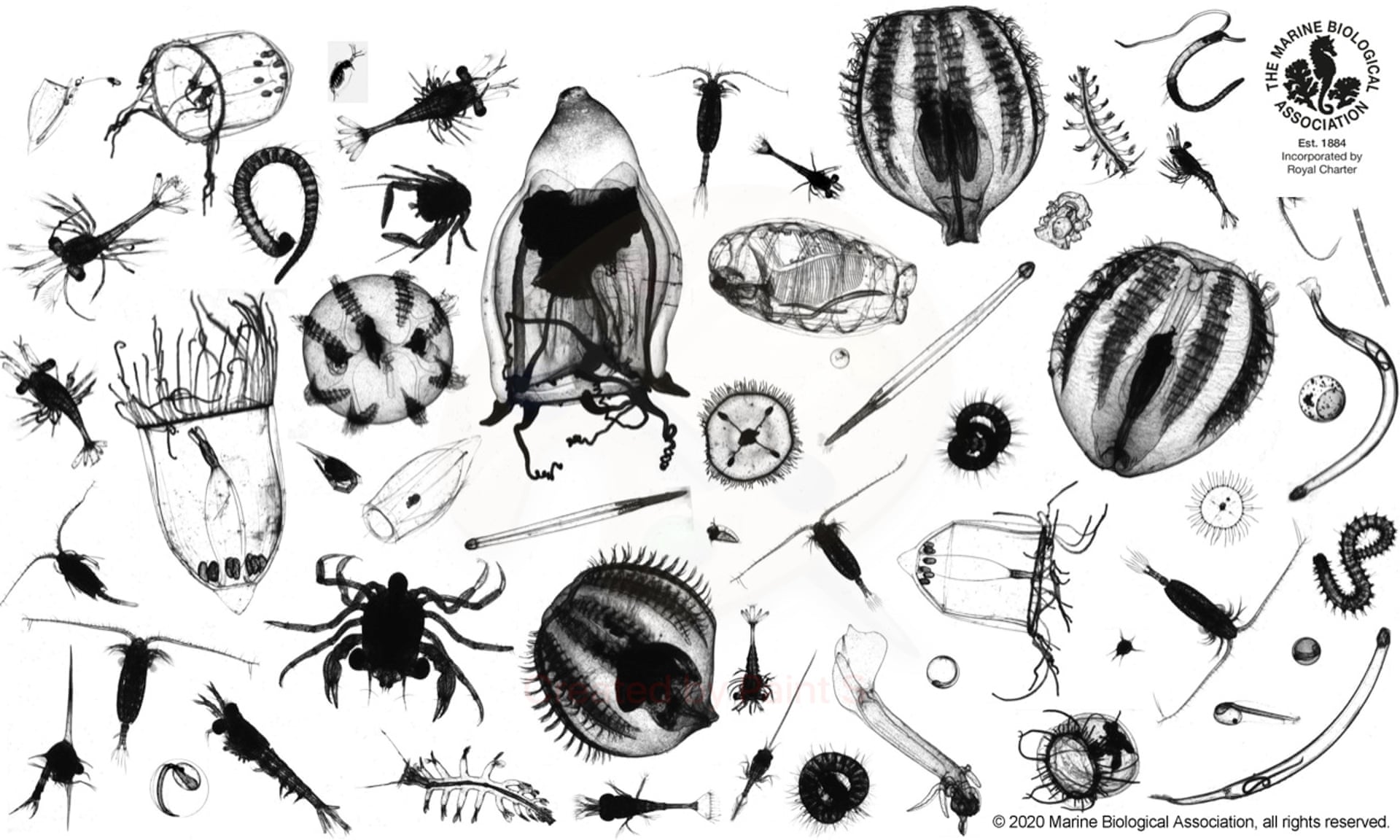 Microscopic plankton: they provide a food source for fish, seabirds and other marine life, as well as absorbing CO2 emissions

The CPR survey is the longest-running marine science project of its kind.
It began in 1931 when the scientist Sir Alister Hardy investigated how herring were influenced by plankton in the North Sea.
This month the distance surveyed will reach an impressive 7m nautical miles, equivalent to 320 circumnavigations of the Earth.

Since that first tow from Hull to Germany 89 years ago, the equipment has hardly changed.
So far a quarter of a million samples have been analysed, representing a vast geographical spread over the course of the past century.
The immense scope has allowed scientists to see dramatic patterns in ocean health, across both time and space, building a much clearer picture of how our marine environments are changing.

It is also, says Gregory, “one of the oldest citizen science projects in the world”.
Although it is coordinated by the Marine Biological Association in Plymouth, which houses the world’s largest biological library of microscopic plankton, the survey relies on the goodwill of the merchant ships who agree to take the recorders with them as they cross the world’s oceans.

He’s known as the “Milk Tray man” in British ports, because he often takes chocolates as gifts for the sailors to thank them for their help.
“Because most crews and port staff remember us, a glitch at sea or tricky courier logistics are much easier to resolve,” he says.
“We also realise that while it’s mission critical for us, for these guys in ports, it’s an add-on – and they’re under more pressure than ever right now.”

Covid-19 has posed the biggest threat to this research in 90 years – even more so than the second world war, organisers say – because the logistics of getting the CPRs to and from ports is very difficult with current travel restrictions.

But while the pandemic has scuttled much biological research, the plankton survey has been able to continue on essential shipping routes, because no special scientific knowledge is required of the crew volunteers.
CPRs are designed to be robust, failsafe and very easy to use.
And because this low-tech piece of kit is mechanically driven by a small propeller that spins while being towed, it’s low maintenance. 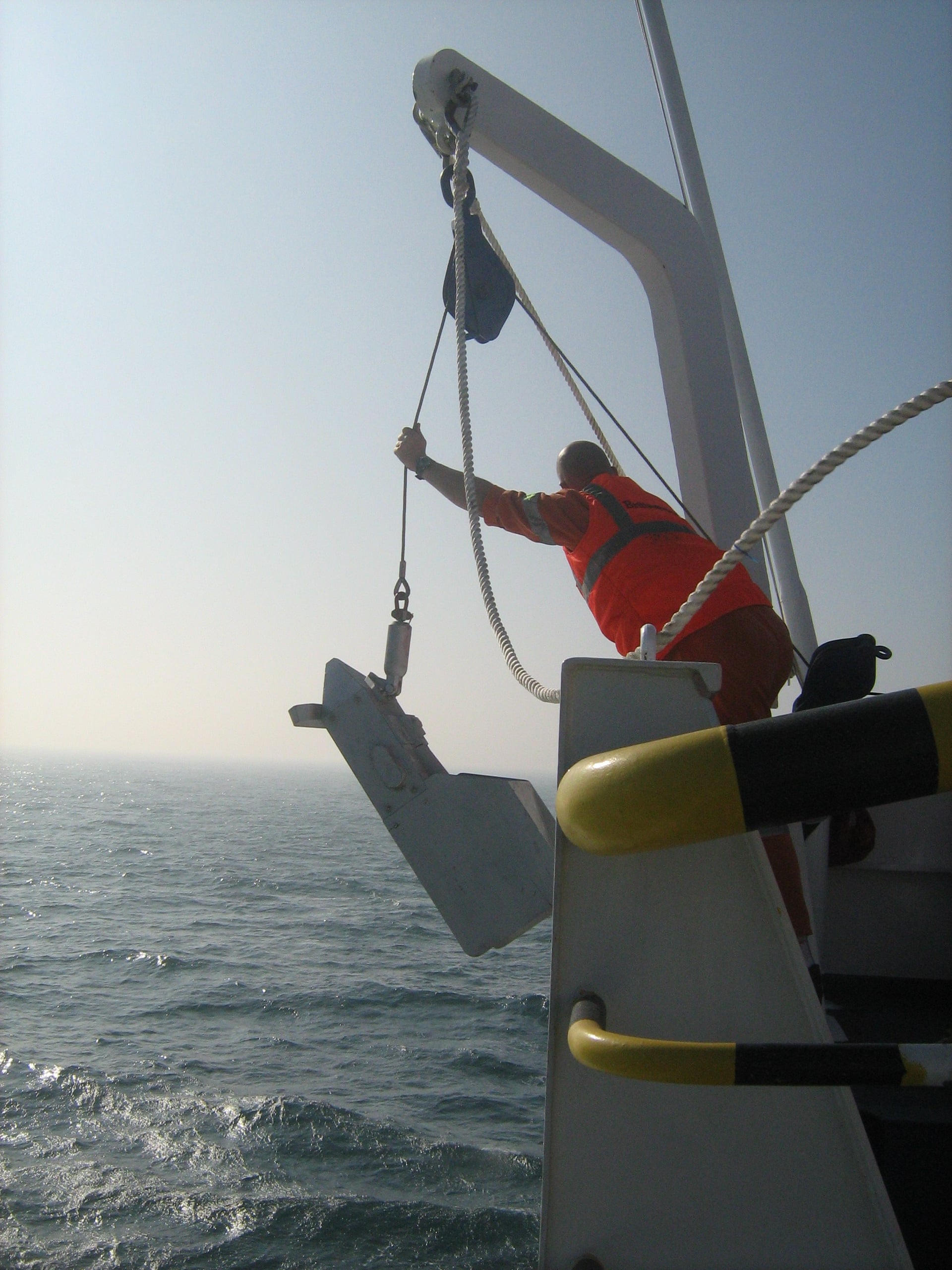 Seawater flows in through a small aperture at the front; for every 10 nautical miles towed, it filters three cubic metres of water.
Inside, plankton are collected between two layers of silk on a “cassette” that moves constantly onto a collection spool, which sits in formaldehyde to preserve the sample.
Tried and tested for decades, the little torpedoes can be towed for up to 500 nautical miles at a time, with each 10cm of silk representing one 10-nautical mile sample.

“We’ve recorded more than 200m biological records of individual species from the samples we’ve analysed,” says David Johns, head of the CPR survey.
“This resource is freely available online to everyone, from schoolchildren all the way up to top-flight scientists, who use our data for a myriad of different reasons.”

Plankton are defined as organisms that drift in the ocean, unable to swim against the current.
Because they are so dependent on ocean patterns, studying them can teach us about the health of not just the seas, but of the planet itself.
The longer the research continues, the greater its value for predicting future trends – and confronted with a climate crisis, that predictive power has never been more valuable.

Dr Clare Ostle, one of the CPR research scientists, has analysed more than 800 different types of plankton, from plant-like phytoplankton – which photosynthesise to produce oxygen – to the animals known collectively as zooplankton, which include fish larvae and jellyfish.

“With the spring plankton bloom kicking off right now, it’s a critical time for collecting samples,” she says.
“A lot of people will be relying on this data, as their own monitoring programmes aren’t able to continue during the pandemic. So it’s a big deal for us.”

We’ve had people come to us wanting to look back in time, to study plastic pollution, for example Dr Clare Ostle, CPR scientist

The scope of the survey has evolved over time.
Since 2017, tows have included shipping routes along the north-west passage, as a result of ice melt in the Arctic.
Meanwhile, as research questions change and new technologies come into play, fresh data can be collected from old samples.
“We’ve had people come to us wanting to look back in time, to study plastic pollution, for example,” Ostle says.
The first complete plastic bag caught by the records was recorded in 1965, and studies since then show an increasing amount of plastic fishing debris getting caught up in the recording equipment.

Indeed, in collaboration with the University of Plymouth’s Prof Richard Thompson, Ostle’s studies of plankton dating back to the 50s were able to confirm the significant increase in plastics in the open ocean since the 80s.
As a result of this pioneering study in 2004, Thompson coined the phrase “microplastics”, for fragments smaller than 5mm (and which are now so ubiquitous that some plankton have been found to ingest them).

The study also provides insight into the spread of disease.
After a form of cholera was contracted by people eating contaminated fish eggs on the west coast of Canada, scientists used the plankton survey to map the spread of cholera bacteria, which they found clinging to the surface of some plankton such as fish eggs.

The most crucial thing plankton can help us understand, however, is likely to be how the climate crisis is affecting our oceans.
The shifting distribution of plankton is a measurable effect of rising sea temperatures.
By studying samples over 30 years, Ostle has found that plankton living in colder waters have significantly smaller areas where they can thrive.
Meanwhile, plankton living in warmer waters are moving towards cooler conditions in the poles.

“This has major impacts on fish stocks, seabird populations and so many other marine animals that feed on plankton,” says Ostle.
“Plankton also absorb CO2 emissions, so they are a massive natural carbon sink that we need to protect."
“It’s so important that we maintain this unusual dataset, because there are still so many discoveries to be made, and stories that haven’t yet been told.”

Wilson and Gregory, for their part, are working hard to make sure the “golden thread of volunteers in ports around the world” know they’re more appreciated than ever.

During the pandemic he has been packing goody bags, including sweets and diving or football magazines, to send off to the crews as a special thanks.

“Everyone involved knows the value of the health of our oceans, because this is their livelihood,” he says of the citizen-scientist sailors who’ve been crucial to the mission since 1931.
“They have the sea in their heart. And they really appreciate the chocolates.”