France expands its submarine domain by a quarter of a hexagon

With the assistance of SHOM surveys, Ifremer has piloted Extraplac project

From V&V by Olivier Chapuis (translated from French)

At the United Nations, the Commission on the Limits of the Continental Shelf authorized France to extend its submarine domain off Reunion Island and Saint-Paul and Amsterdam, Taaf Islands, by 151,323 square kilometers.
This extension represents a little more than a quarter of the surface area of mainland France.
With the second largest maritime area in the world, France is more than ever at the heart of the major challenges of ocean exploration, exploitation and protection.

A little less than two years ago - on the occasion of the launch of the Maritime Boundaries portal that the Navy's Hydrographic and Oceanographic Service (Shom) maintains online on behalf of the State - we wrote that maritime France had lost some weight but that it had beautiful remains.

This thinning - below the eleven million square kilometres that used to be rounded off - was in fact the result of a new cartographic projection that distorted surfaces at high latitudes less and a more powerful geodesy algorithm.

Since 2018, France's maritime areas have shown a slight upward trend.
Including the extensions of the continental shelf in force on 12 June 2020, they totalled 10,760,500 square kilometres.

Their planetary distribution can be consulted on Maritime Limits thanks to Shom's expertise.
Without these extensions, their surface area was 10 186 526 square kilometres on the same date.
More than ever, this is the second largest maritime domain in the world after that of the United States, which would be 11.3 million square kilometres (but the United States has not communicated official figures on this subject and has not signed the United Nations Convention on the Law of the Sea).
It is southwest of Reunion Island, at the limit of Madagascar's EEZ, that the UN grants France an extension of its continental shelf beyond the 200-mile limit.

It is southwest of Reunion Island, at the limit of Madagascar's EEZ, that the UN grants France an extension of its continental shelf beyond the 200-mile limit. | EXTRAPLAC

On 10 June 2020, at the United Nations (UN), the Commission on the Limits of the Continental Shelf (CLPC) made public recommendations (read in full here) authorising France to extend its continental shelf in the Indian Ocean, off Reunion Island (58,121 additional square kilometres) and Saint-Paul and Amsterdam, islands of the French Southern and Antarctic Territories (93,202 additional square kilometres).

Eleven zones are concerned by the Extraplac programme, with accepted applications (for which French decrees have been published or are forthcoming), under consideration or not yet examined by the CLPC.

In the light of the dossiers currently under consideration or awaiting consideration at the United Nations, France could still claim approximately 500,000 square kilometres of continental shelf.
These extensions are being carried out under the Extraplac programme (Reasoned Extension of the Continental Shelf), led by the General Secretariat for the Sea, attached to the Prime Minister, with the scientific and technical expertise of the French Research Institute for the Exploitation of the Sea (Ifremer) and Shom, mainly.

Since 25 September 2015, France has extended its continental shelf around Kerguelen (in yellow). This extension does not extend to Heard Island, belonging to Australia, which limits the EEZ of the Kerguelen Islands, whose surface area is 575,000 square kilometres.

According to Article 76 of the United Nations Convention on the Law of the Sea - known as the Montego Bay Convention of 10 December 1982, which entered into force in 1994 and was ratified by France on 11 April 1996 - a coastal state may extend the continental shelf under its jurisdiction beyond 200 miles.
However, this extension, up to a maximum of 350 miles, concerns only the seabed of the continental shelf (marine soil and subsoil continuing the land on the seabed). 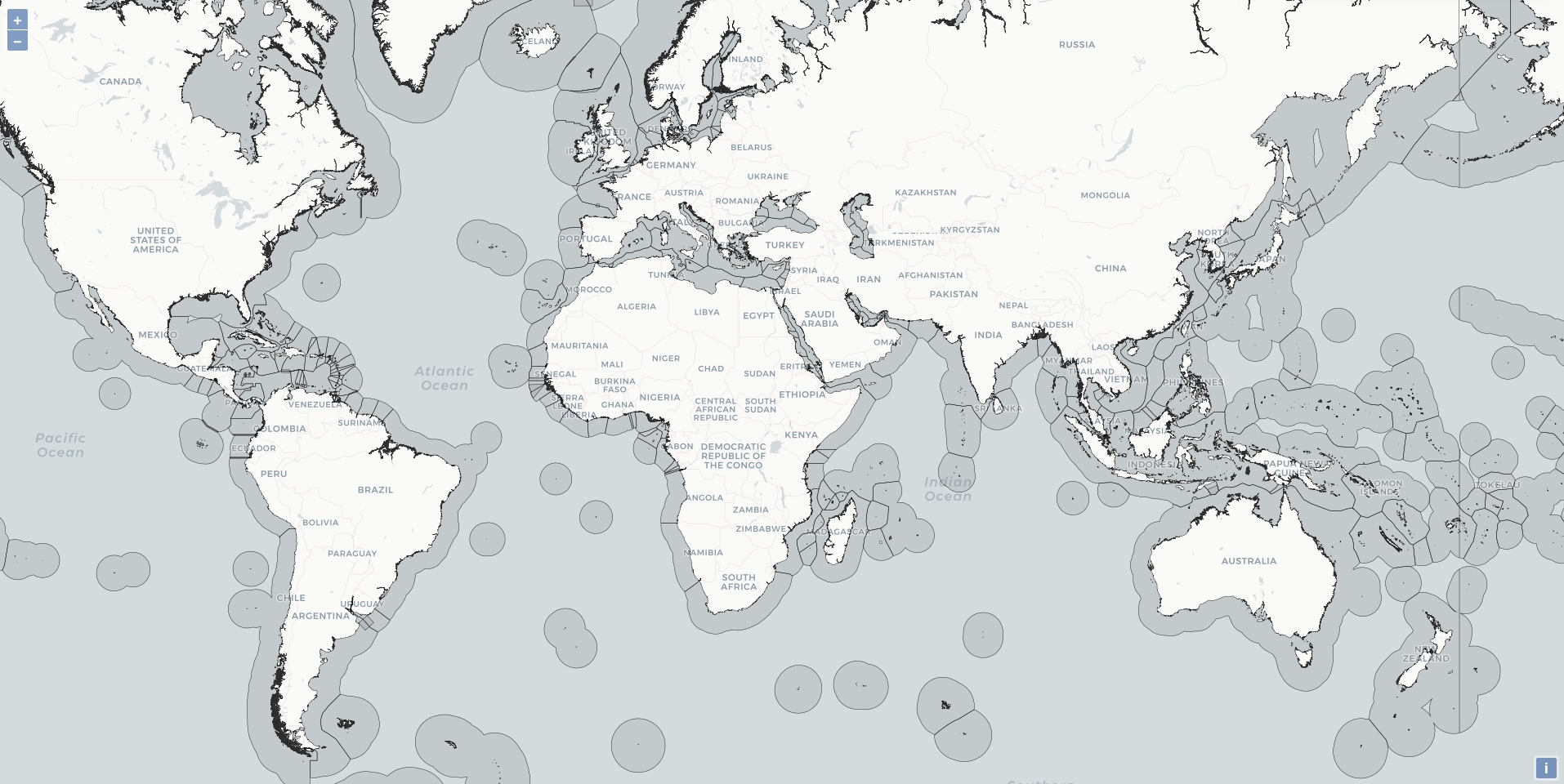 International EEZ in the GeoGarage platform

The water column there remains international, unlike in the Exclusive Economic Zone (EEZ), where the state exercises jurisdiction (environmental protection in particular) and has sovereign rights, both over the waters (exploitation of resources, e.g. fishing) and over the seabed and subsoil, where it can exploit hydrocarbons, minerals, metals and other living resources.

The extension of the continental shelf of the islands of Saint-Paul and Amsterdam is located to the north-east of these islands in the French Southern and Antarctic Lands in the Indian Ocean.

The United Nations Convention on the Law of the Sea does, however, provide for the sharing of wealth on extensions of the continental shelf with signatory countries, particularly those that are developing or do not have access to the sea.
For the time being, France indicates through the General Secretariat for the Sea that the exploitation of the wealth from these extensions is "not on the agenda".

On the contrary, it welcomes a decision that will enable it to ensure the protection of these underwater areas, which are rich in potential resources and a still poorly known biodiversity, but also to "preserve its rights for the future".
A future that is all the more promising given that ocean exploration is still in its infancy and that only 18% of the world's seabed is hydrographically surveyed to date.
This means that the scarcity of continental resources will force humanity to look into the abyss.