Thirty years after Exxon Valdez, the response to oil spills is still all wrong

In 1989, a tanker ran aground off the coast of Alaska, causing one of the worst oil spills in United States history.
The Exxon Valdez oil tanker leaked 11m gallons of oil into Prince William Sound, Alaska.
30 years later, the lessons of the Exxon Valdez continue to resonate.video : NYTimes

From The Guardian by Riki Ott and Jack Siddoway

Chemicals used to clean up spills have harmed marine wildlife, response workers and coastal residents.
The EPA must act.


By day, a secluded bay in Prince William Sound is the site of spawning salmon destined for supermarkets.
But when the tide goes out and the beach is exposed, evidence of oil can be found, 26 years after the Exxon Valdez spill.
Final segment of a three-part investigation.

Thirty years ago, on 24 March 1989, communities in Prince William Sound, Alaska, awoke to horrific news: the Exxon Valdez, an oil tanker, had run aground and leaked 11m gallons of oil into the sound.
Chaos ensued.
Fishermen desperately began collecting oil in five-gallon buckets.
Exxon, meanwhile, responded by burning floating oil and dumping toxic oil-based chemicals called “dispersants”.
Dispersants break oil apart into smaller droplets, and this was assumed to enhance natural dispersion and degradation of oil, thereby “cleaning up” a spill.
Instead, the dispersants formed chemically enhanced oil particles that proved to be more toxic to humans and the environment than the oil alone. 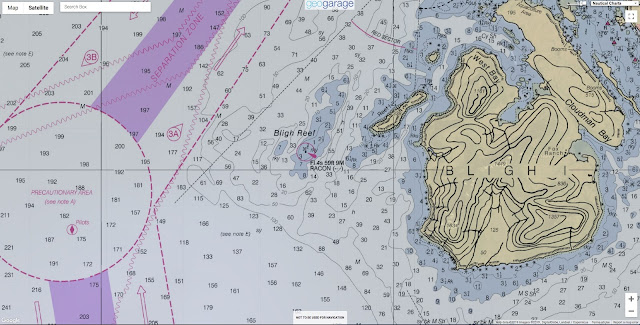 NOAA map excerpt showing Bligh Reef and automated beacon with the GeoGarage platform
Bligh Reef, sometimes known as Bligh Island Reef, is a reef off the coast of Bligh Island in Prince William Sound, Alaska. This was the location of the 1989 Exxon Valdez oil spill.
After the incident, US Code 33 § 2733 mandated the operation of an automated navigation light to prevent future collisions with the reef.
Despite these efforts the tug Pathfinder ran aground on Bligh Reef on Dec 24, 2009, rupturing its tanks and spilling diesel fuel.
Bligh Reef is also where Alaska Steamship Company's Olympia ran aground in 1910.

Twenty-one years later, on 20 April 2010, the BP Deepwater Horizon drilling rig exploded off the Louisiana coast, releasing 210m gallons of oil into the Gulf of Mexico.
The subsequent response was all too familiar – burning oil and dumping dispersants once again.
Two million gallons of dispersants were applied to “clean up” the spill.
Instead, these chemicals led to unprecedented oil deposition on the ocean floor, resulting in severe impacts to marine wildlife from the sea floor to the upper ocean – including large dolphin die-offs, fish kills, and deformities – and devastating pulmonary, cardiac and central nervous system illnesses for response workers and coastal residents.


Dispersants are being used in the Deepwater Horizon oil spill response.
Dispersants are not safe to humans or the environment.
They contain various industrial solvents and workers must be protected from exposure.
Dispersants are usually applied directly to the spilled oil by spraying from an airplane, helicopter, or vessel.
During the 1989 Exxon Valdez oil spill cleanup in Alaska, some dispersants were manually sprayed by workers on oiled beaches.
Although dispersants are manufactured by many companies and their ingredients may differ, most contain a detergent and a solvent.
The solvent allows the detergent to be applied.
The detergent helps to break up the oil on the water surface into very small drops.
These tiny oil drops are then able to easily mix with the water and be diluted.
Most dispersants contain petroleum distillates, a colorless liquid with a gasoline- or kerosene-like odor.
They are composed of a mixture of paraffins (C5 to C13) that may contain a small amount of aromatic hydrocarbons.
Exposure to can cause irritation to the eyes, skin, or respiratory tract.
NIOSH also recommends preventing skin contact with oil mist.
To prevent harmful respiratory and dermal health effects NIOSH recommends reducing worker exposures to petroleum distillates and similar cleaning agents in dispersants.
For more details, go to the NIOSH website at :
https://www.cdc.gov/niosh/topics/oilspillresponse/dispersants.html
This was clipped from video produced by the Governors Office of the State of Alaska in 1989 and 1990.

This is why our coalition of environmental justice organizations, conservation groups and individuals from Alaska to Louisiana directly affected by dispersants gave the Environmental Protection Agency (EPA) notice this week of our plan to sue the agency to compel it to update its rules regulating the use of chemical agents known to be harmful to the environment and everything in it.
We are concerned that the EPA is putting at risk the 133 million or so Americans who live near the coasts, making up 39% of the US population, and the millions more who live near lakes, rivers, or along oil pipeline corridors and who are in harm’s way of the next “big one”.

The use of these dispersants is a response method outlined in a set of federal regulations called the National Contingency Plan, which governs our nation’s oil and chemical pollution emergency responses.
The Clean Water Act directs the EPA to periodically review the plan and update it to account for new information and new technology.
By requiring periodic updates of the plan, Congress sought to ensure it would reflect current understanding of response methods and facilitate actions that minimize damage from oil spills.

The EPA last updated the National Contingency Plan in 1994.
That it does not reflect the advances in understanding of dispersant toxicity that came after the BP Deepwater Horizon disaster is, at best, a gross understatement.
In fact, the 1994 update did not even incorporate lessons learned from the long-term ecosystem studies following the 1989 Exxon Valdez disaster.
In 2011, EPA’s Office of the Inspector General concluded that the plan urgently needed revision.

It took a public petition filed by Dr Ott and members of the grassroots organization now known as Alert (A Locally Empowered Response Team) to prompt the EPA to modernize the plan; in 2013 the EPA finally initiated a rulemaking proceeding.
In 2015, the agency invited and received over 81,000 public comments, a majority of which called for reducing use of oil-based chemical dispersants and better efficacy and toxicity standards.


Techniques used after the 1989 Exxon Valdez oil spill—such as washing sand and returning it to beaches—are helping to clean Gulf of Mexico coasts affected by the oil spill.

But since the comment period closed in April 2015, the EPA has been silent on the issue.
Meanwhile, the Trump administration, under the new National Outer Continental Shelf Oil and Gas leasing program, plans to open 90% of US coastal areas to oil and gas drilling, putting communities back in harm’s way.
Given the history of offshore oil drilling, it is simply a matter of when – not if – another devastating spill will occur.
Delaying updates to the National Contingency Plan is a dangerous dereliction of EPA’s duties under the Clean Water Act.

We can no longer stand on the sidelines and hope the agency will act.
On behalf of those who have already lost their homes, their livelihoods, their health – and even their lives – we are going to court to demand action.