What caused the tsunami in Indonesia and why was there no warning?

An eruption of the Anak Krakatau volcano the day before the deadly tsunami was caught on camera by a team from Indonesia's Natural Resources Conservancy Agency.
The sound of explosions can be heard as the volcano emits smoke and lava.
The volcano lies in the Sunda Strait between Java and Sumatra, linking the Indian Ocean and Java Sea. Scientists said Sunday's tsunami could have been caused by volcanic landslides

From The Guardian by Lisa Martin

Search-and-rescue efforts were continuing in Indonesia following a deadly tsunami in the Sunda Strait which claimed more than 280 lives.
More than 1,000 people were injured and 11,600 people displaced.
The district of Pandeglang, on the western tip of the island of Java was worst hit, with 207 killed and 755 injured.


It was caused by an eruption of the Anak Krakatau volcano.
A 64-hectare (138-acre) section collapsed into the ocean and this triggered an underwater landslide, officials confirmed on Monday.

Images captured by the European Space Agency’s Sentinel-1 satellite showed that a large portion of the southern flank of the volcano had slid off into the ocean, scientists said. 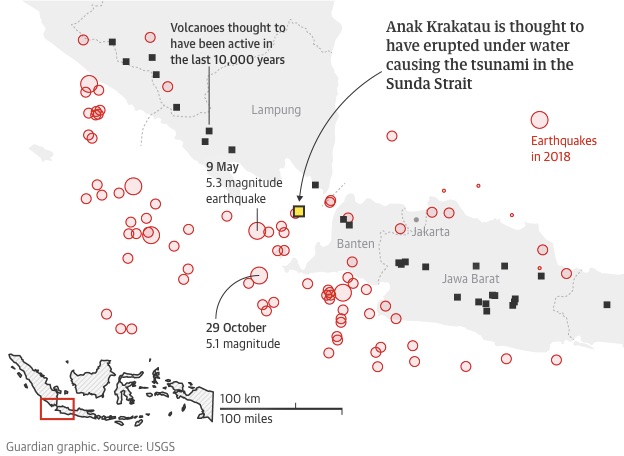 Why wasn’t there a warning system?

In the case of tsunamis caused by earthquakes, the shaking earth can act as a warning but it’s much trickier to anticipate tsunamis from volcanic eruptions.

“There’s usually a big draw down in water below low tide levels, so you if you’re on the coast you’ve got a matter of minutes to get to high ground,” Kennedy said.

Kennedy said if a buoy network had been in place around Anak Krakatau, a one-to-two minute warning of a pending wave was the most anyone could expect.
“The expense of doing that everywhere is just impossible,” he said.

Indonesia has 147 volcanoes and 76 are considered active.

Kennedy said population growth on coastlines and popularity of beach resorts exposed more people to the risk of tsunamis. 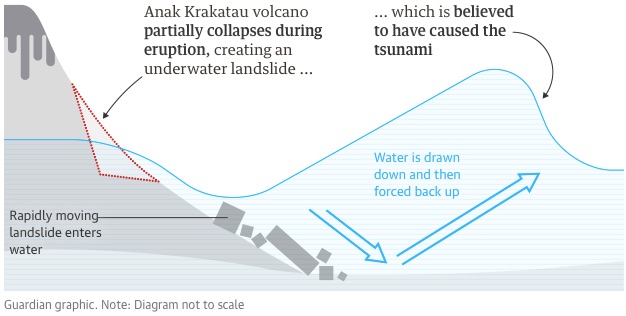 Krakatau is part of the Pacific Rim of Fire.
The Australian-Indonesian plate is going back down into the earth underneath the Eurasian plate.

“As the plate goes down into the mantle it actually starts melting, so what you get are volcanoes that sit on top of that,” Kennedy said adding they have a high level of silica which traps the gases as well as water.
“They tend to be really viscous, really sticky volcanoes and they produce massive eruptions. That’s because it’s remixing all the old ocean floor,” he said. 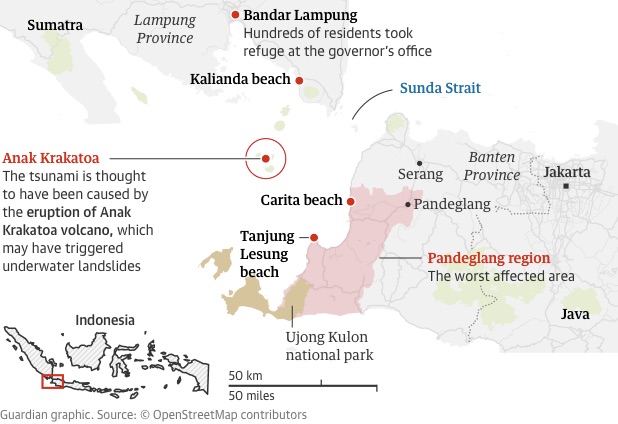 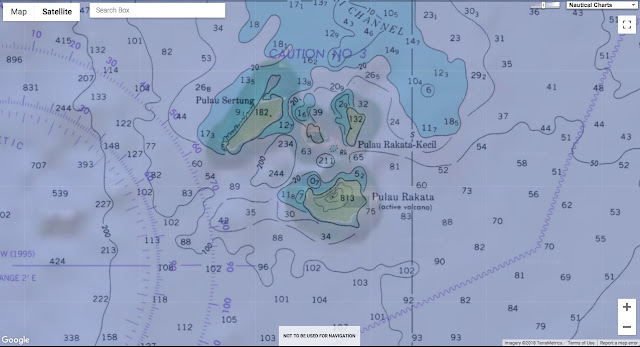 In 1883, eruptions at Krakatau caused tsunami waves that reached 36.6 meters and wiped out an estimated 36,000 people.
The entire island of Krakatau was vaporised and volcanic gas, ash and rocks spewed 80km high.
The eruptions, turbo charged by steam, were one of the loudest noises heard by human beings in modern in history, Kennedy said.
“There were reports they heard the sound in Darwin and some reports said they heard it as far south as Perth,” he said.
He said the ash clouds from Krakatau cooled the global temperature by over a degree for many years.

Krakatau was quiet until late 1927, when a new eruption began on the seafloor.
The following year a rising cone burst through the ocean.
Two years later it became an island called Anak Krakatau “Child of Krakatau”.

Kennedy said minor eruptions over the years had been slowly building up the edifice of Anak Krakatau.
“You’ve got more magma and lava coming up underneath,” he said.