A look at what it takes to design, build, test and launch
one of Lockheed Martin’s next-generation GPS III satellites for the U.S. Air Force.
From establishing the modern economy to bringing you home safely, Global Positioning System (GPS) is a key component to our everyday lives.
More than four billion military, commercial and civil users worldwide connect with GPS’ valuable positioning, navigation and timing (PNT) signals.
And Lockheed Martin’s advanced, new GPS III is ready to launch the next generation of connection.
GPS III satellites are more powerful, incredibly resilient, incorporate an advanced civilian user signal (L1C), provide three times the accuracy than previous GPS satellites and are designed to evolve and incorporate new technology as it develops.
Launch of the first GPS III satellite is scheduled for December 18 and our phones will receive an upgraded GPS signal from this satellite by the end of 2019.


From AirForceTimes by Dan Elliott

After months of delays, the U.S. Air Force is about to launch the first of a new generation of GPS satellites, designed to be more accurate, secure and versatile.

But some of their most highly touted features will not be fully available until 2022 or later because of problems in a companion program to develop a new ground control system for the satellites, government auditors said.

The satellite is scheduled to lift off Tuesday from Cape Canaveral, Florida, aboard a SpaceX Falcon 9 rocket. It’s the first of 32 planned GPS III satellites that will replace older ones now in orbit. Lockheed Martin is building the new satellites outside Denver. 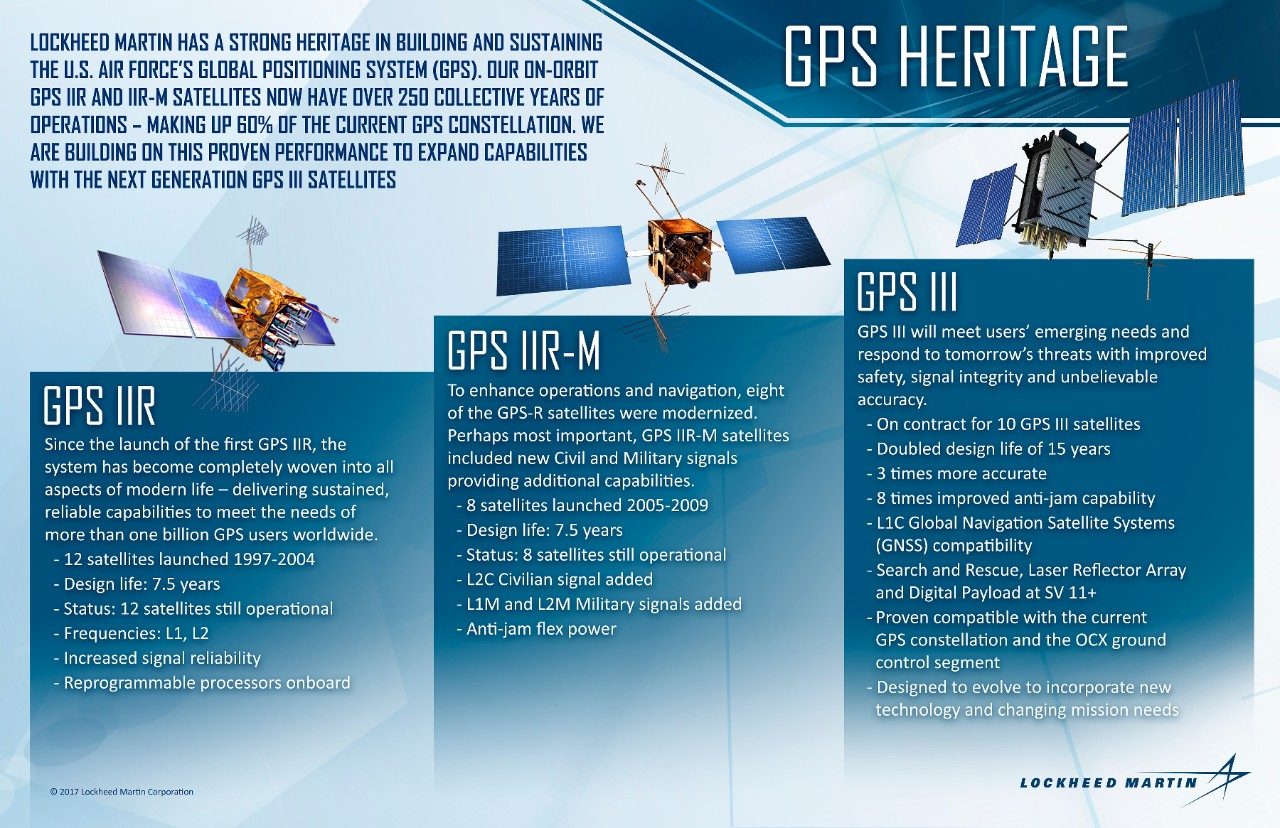 After months of delays, the U.S. Air Force is about to launch the first of a new generation of GPS satellites, designed to be more accurate, secure and versatile.

GPS is best-known for its widespread civilian applications, from navigation to time-stamping bank transactions.
The Air Force estimates that 4 billion people worldwide use the system.

But it was developed by the U.S. military, which still designs, launches and operates the system.
The Air Force controls a constellation of 31 GPS satellites from a high-security complex at Schriever Air Force Base outside Colorado Springs.

Compared with their predecessors, GPS III satellites will have a stronger military signal that's harder to jam — an improvement that became more urgent after Norway accused Russia of disrupting GPS signals during a NATO military exercise this fall.

GPS III also will provide a new civilian signal compatible with other countries' navigation satellites, such as the European Union's Galileo system.
That means civilian receivers capable of receiving the new signal will have more satellites to lock in on, improving accuracy.
"If your phone is looking for satellites, the more it can see, the more it can know where it is," said Chip Eschenfelder, a Lockheed Martin spokesman.


It is a part of our lives every day and over a billion people depend on this technology.
GPS, unlike any other military program, has expanded into the commercial market, becoming a mainstay of everyday life for people around the world.
See how Lockheed Martin continues to improve this U.S. Air Force provided asset with GPS III.
With satellites 1-8 already in production, this entirely new satellite design will take positioning, navigation and timing to the highest level and will continue to evolve into the future.
Simply put, GPS III is the most powerful and capable GPS satellite ever built – and it is already here

The new satellites are expected to provide location information that's three times more accurate than the current satellites.
Current civilian GPS receivers are accurate to within 10 to 33 feet (3 to 10 meters), depending on conditions, said Glen Gibbons, the founder and former editor of Inside GNSS, a website and magazine that tracks global navigation satellite systems.
With the new satellites, civilian receivers could be accurate to within 3 to 10 feet (1 to 3 meters) under good conditions, and military receivers could be a little closer, he said.

Only some aspects of the stronger, jamming-resistant military signal will be available until a new and complex ground control system is available, and that is not expected until 2022 or 2023, said Cristina Chaplain, who tracks GPS and other programs for the Government Accountability Office.
Chaplain said the new civilian frequency won't be available at all until the new control system is ready.

The price of the first 10 satellites is estimated at $577 million each, up about 6 percent from the original 2008 estimate when adjusted for inflation, Chaplain said.
The Air Force said in September it expects the remaining 22 satellites to cost $7.2 billion, but the GAO estimated the cost at $12 billion.

The first GPS III satellite was declared ready nearly 2½ years behind schedule.
The problems included delays in the delivery of key components, retesting of other components and a decision by the Air Force to use a Falcon 9 rocket for the first time for a GPS launch, Chaplain said. That required extra time to certify the Falcon 9 for a GPS mission.

The new ground control system, called OCX, is in worse shape.
OCX, which is being developed by Raytheon, is at least four years behind schedule and is expected to cost $2.5 billion more than the original $3.7 billion, Chaplain said.
The Defense Department has struggled with making sure OCX meets cybersecurity standards, she said.
A Pentagon review said both the government and Raytheon performed poorly on the program.
Raytheon has overcome the cybersecurity problems, and the program has been on budget and on schedule for more than a year, said Bill Sullivan, a Raytheon vice president in the OCX system.
Sullivan said the company is on track to deliver the system to the Air Force in June 2021, ahead of GAO's estimates.
The Air Force has developed work-arounds so it can launch and use GPS III satellites until OCX is ready to go.

While the first GPS III waits for liftoff in Florida, the second is complete and ready to be transported to Cape Canaveral.
It sits in a cavernous "clean room" at a Lockheed Martin complex in the Rocky Mountain foothills south of Denver.

It's expected to launch next summer, although the exact date hasn't been announced, said Jonathon Caldwell, vice president of Lockheed Martin's GPS program.
Six other GPS satellites are under construction in the clean room, which is carefully protected against dust and other foreign particles.
"It's the highest-volume production line in space," Caldwell said.

For the first time, the Air Force is assigning nicknames to the GPS III satellites.
The first one is Vespucci, after Amerigo Vespucci, the Italian navigator whose name was adopted by early mapmakers for the continents of the Western Hemisphere.