Why the tongue of the Pine Island Glacier suddenly shrank 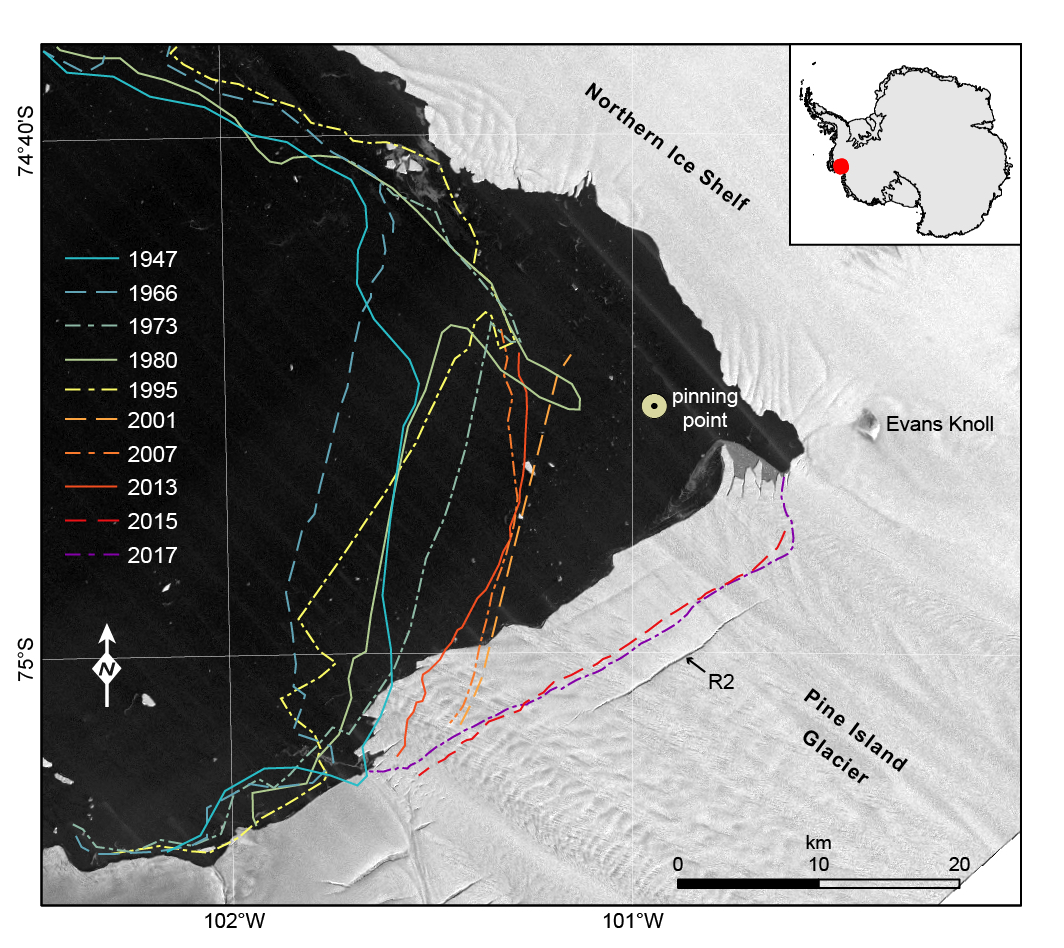 The Pine Island Glacier in Western Antarctica is not only one of the fastest-flowing ice streams in the Southern Hemisphere; over the past eleven years, four major icebergs have calved from its floating tongue. 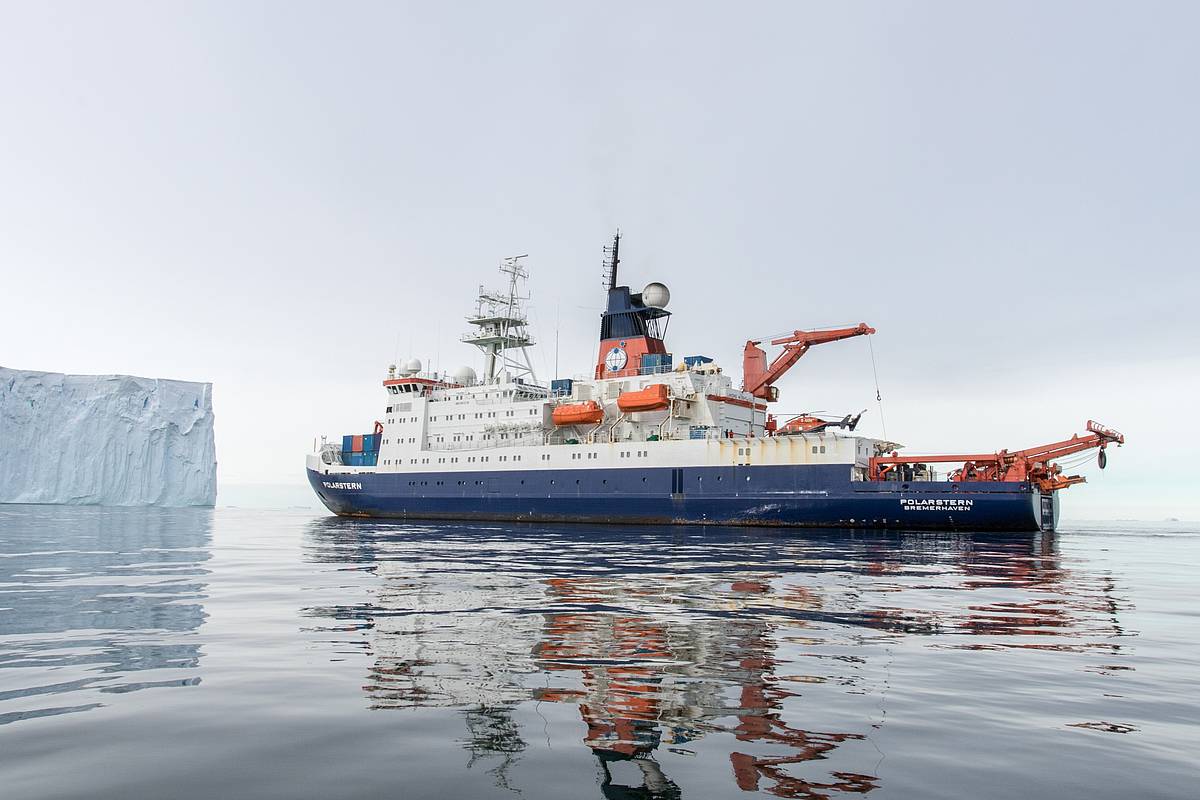 In February 2017, researchers on board the German research icebreaker Polarstern successfully mapped an area of seafloor previously covered by shelf ice.
A comparison of these new maps with satellite images of the ice stream reveals why the glacier suddenly retreated toward the coast: at important points, it had lost contact with the ground, as the experts report in the online journal The Cryosphere, a journal of the European Geosciences Union. 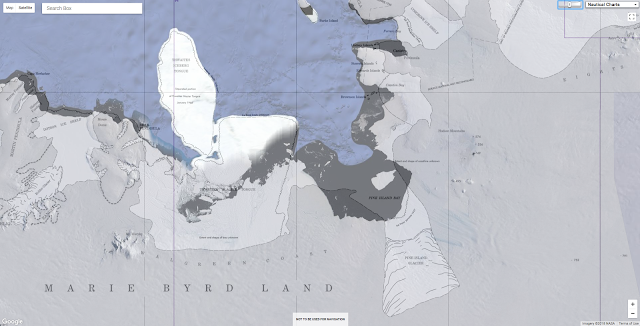 With a flow speed of four kilometres per year, Western Antarctica’s Pine Island Glacier is one of the fastest-flowing ice streams in the Southern Hemisphere.
Together with its neighbouring glaciers, every year the up to 50-kilometre-wide ice stream transports more than 300 gigatonnes of ice from the hinterland to the Amundsen Sea, and is responsible for between five and ten percent of the global sea-level rise.
Scientists have already identified the cause of this rapid loss of ice: since the 1940s, warm water masses, which branch off from the Antarctic Circumpolar Current, have found their way beneath the floating part of the glacier, melting what is referred to as its ice shelf from below.
As a result, the ice tongue, which is currently ca.
55 kilometres long, has been losing roughly 5.3 metres of thickness per year for the past quarter-century. 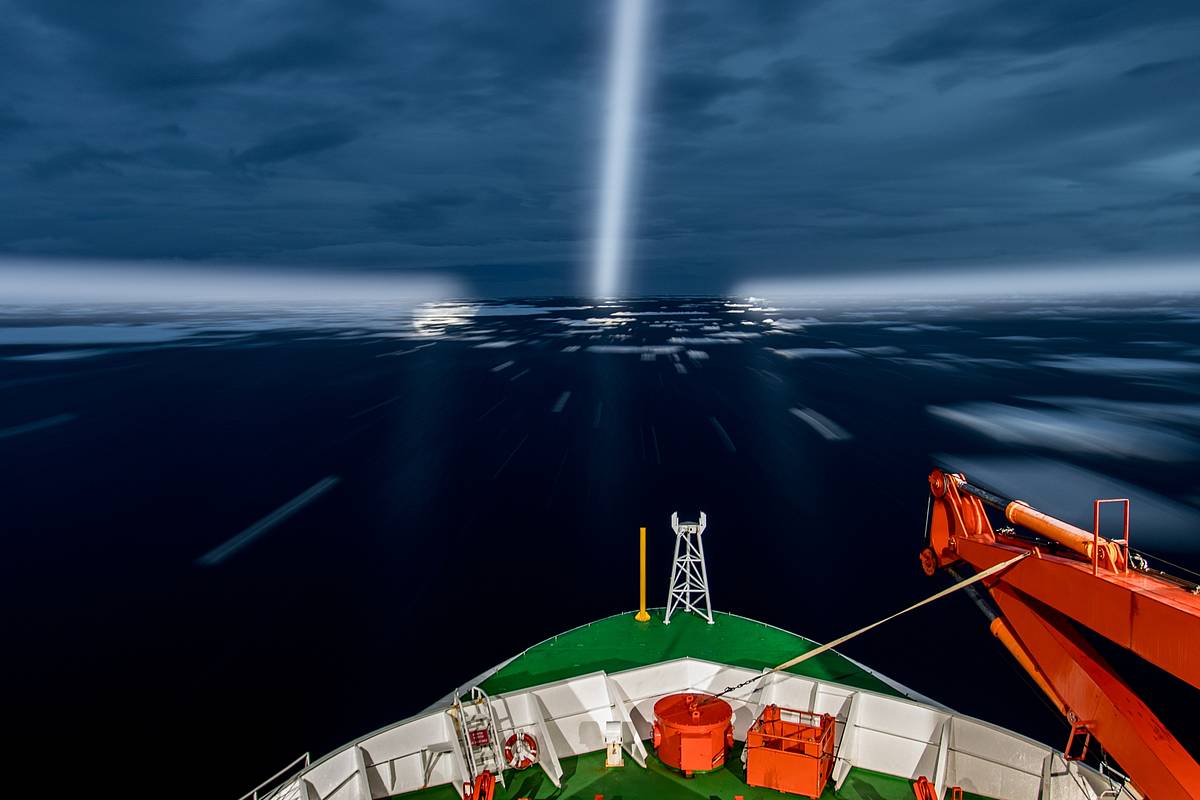 That being said, what remained unclear was why, despite this sustained melting, the Pine Island Glacier’s calving front had barely retreated since the beginning of observation in 1947.
Then in 2015, a calving event shifted the edge of the ice shelf 20 kilometres nearer the coast and reduced the floating ice tongue’s total area to roughly 470 square kilometres.
“The direction and speed of a given glacier’s flow chiefly depend on the topography of the ground below it.
But for most of the ice shelves in the Antarctic, we know very little about the features of the underlying seafloor. 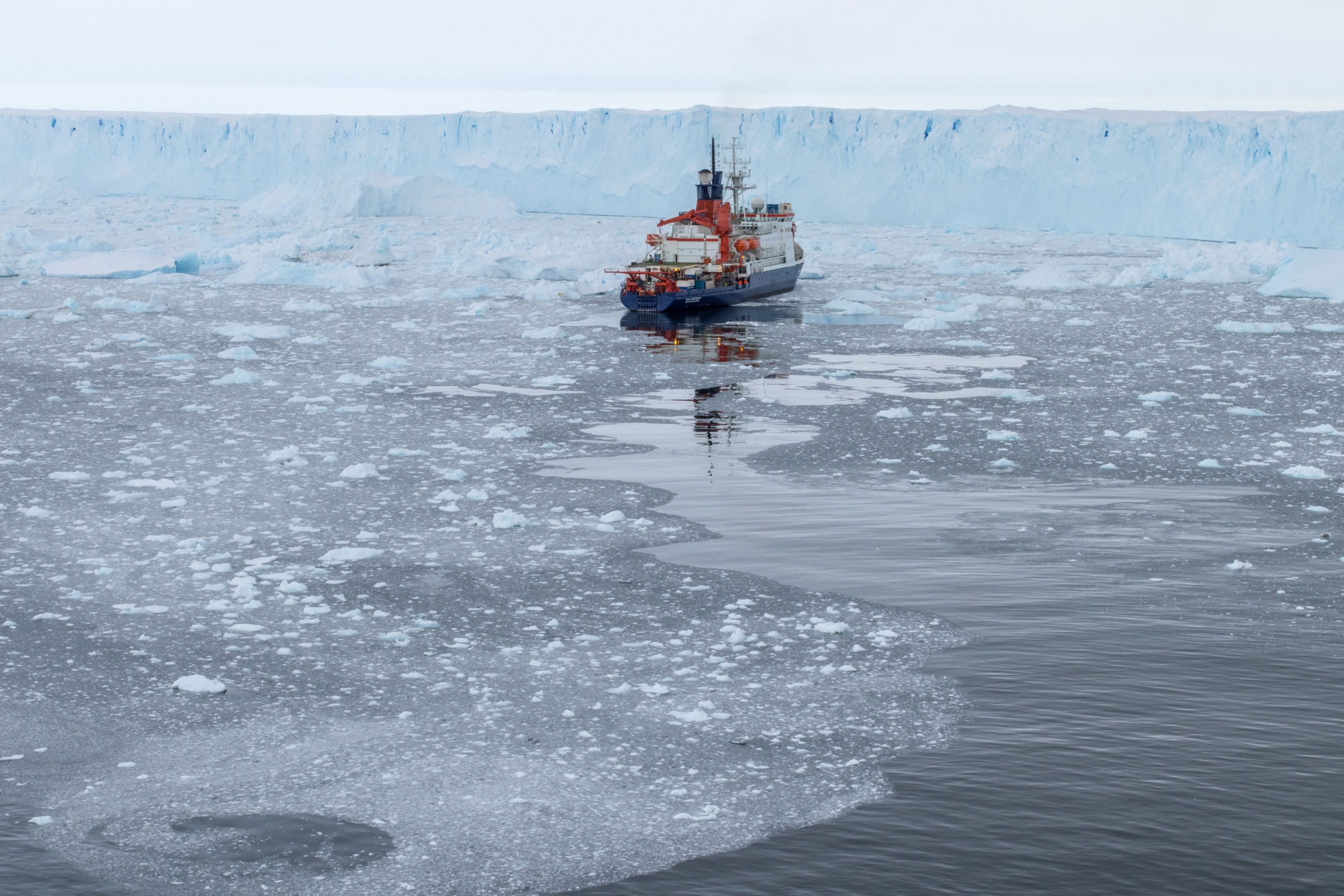 As such, our Polarstern expedition in February 2017 was an unprecedented opportunity to map 370 square kilometres of an area that had previously largely been covered by the Pine Island Glacier’s ice shelf,” explains first author Dr Jan Erik Arndt from the Alfred Wegener Institute, Helmholtz Centre for Polar and Marine Research (AWI) in Bremerhaven.
With the aid of multibeam echosounders, Arndt and his colleagues were able to precisely map the seafloor.

Submarine mountains held back the ice

The new maps of the ocean floor in Pine Island Bay, which is predominantly 800 to 1,000 metres deep, reveal a previously unmapped submarine ridge and two mountains, the peaks of which reach up to a water depth of 370 metres.
The Pine Island Glacier’s more than 400-metre thick ice shelf must have been grounded on the ridge for several decades, as the satellite images of the glacier gathered by the researchers – dating back to 2002 – confirm.
In the older images, rises in the ice’s surface can be identified at precisely those points where the peaks of the ridge are directly under the ice shelf.
“But after 2006, these landmarks are nowhere to be seen.
By that time, the ice shelf must have melted so extensively from below that it was either too light to produce any impression on the surface of the ice, or the ice sheet must have already lost contact with the mountains beneath it,” says co-author Dr Karsten Gohl from the AWI. 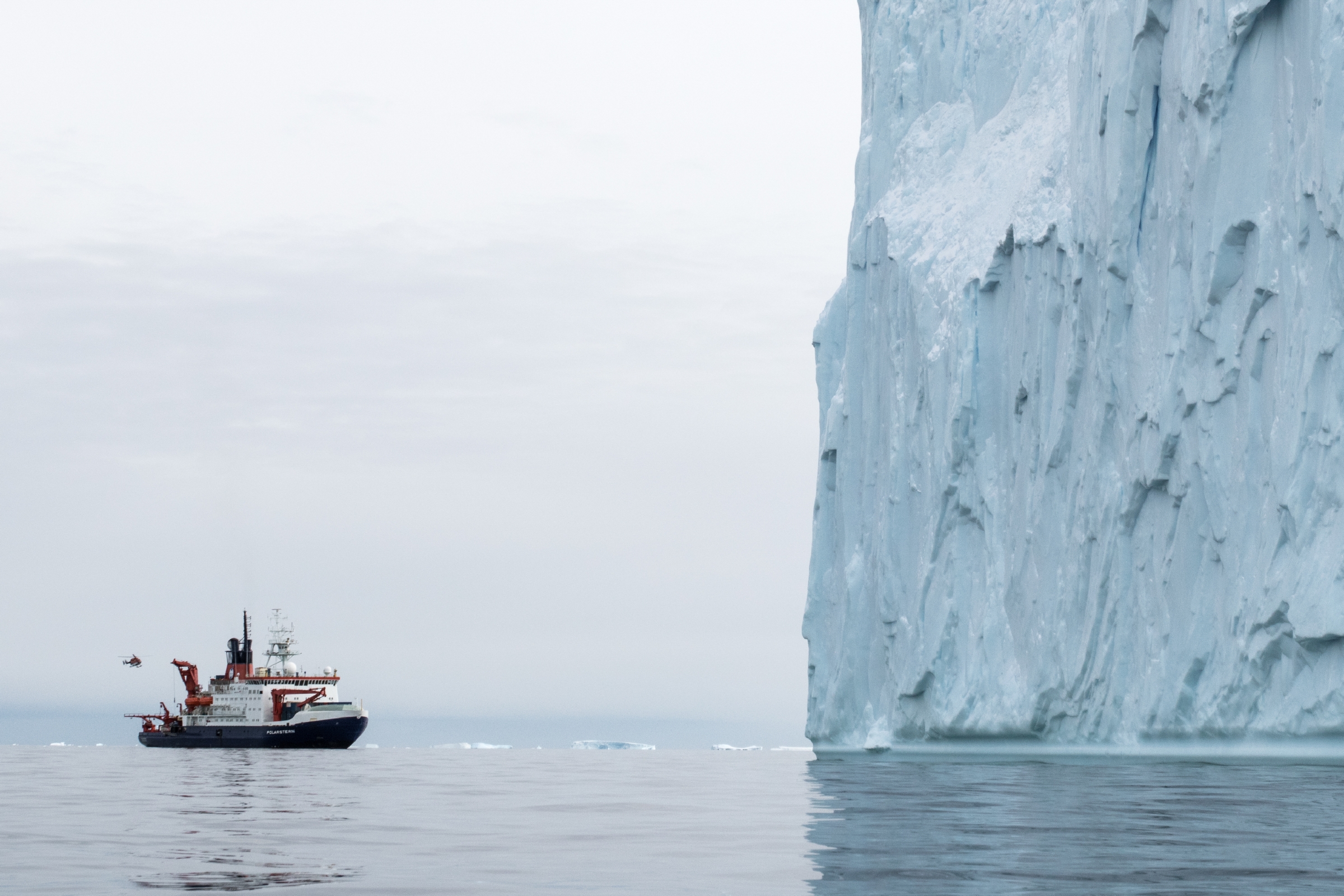 When an ice shelf loses contact with such obstacles (known as “pinning points”), the ice stream reacts as if someone had suddenly released a giant brake.
With nothing left to stop them, the ice masses rapidly flow out to sea – at least that’s the theory.
Using the time series of satellite images for the Pine Island Glacier, the researchers were now able to test this thesis step by step.
Much to their surprise, in the process they determined that submarine highs not only stabilise ice shelves like giant brakes; in some cases, these mountains can also set off calving events – for instance, when the calving front advances, causing it to crash into a mountain with full force.

That must be what happened during a calving event in 2007.
As the satellite images show, back then the edge of the Pine Island Glacier’s ice shelf collided with one of the newly discovered mountains, hitting it so hard that rifts formed in the surface of the ice.
When one of the rifts finally became too large, the entire face of the ice shelf broke off.


The story was similar, albeit less dramatic, with the iceberg that calved in 2015, breaking into several pieces just a few weeks later.
The largest piece became caught on the submarine ridge for nearly a year, turning clockwise over and over again until the combination of ocean currents, wind and melting broke it loose.
The researchers surmise that, just as in 2007, the ice shelf’s repeated contact with the ridge is what ultimately led to the calving event.


The ice shelf has now regained its footing
“The roughly 50-kilometre-long edge of the Pine Island Glacier’s ice shelf currently runs between an island to the north and another glacier to the south, which once again give the ice a bit of support,” says Jan Erik Arndt.
If the melting on its underside continues, at some point the process may make the ice shelf so thin that it becomes instable; however, as the researchers report, with the ice thickness measuring approximately 400 metres at the calving front, we haven’t yet come to that point.

The bathymetric maps of the seafloor in Pine Island Bay and the results of the image analyses can now be fed into computer models of the West Antarctic Ice Sheet, helping produce more accurate simulations.

In addition to the two researchers from the Alfred Wegener Institute, Helmholtz Centre for Polar and Marine Research, a member of the British Antarctic Survey and experts from the German Aerospace Center (DLR) took part in the new study.