From Greek Reporter by Philip Chrysopoulos

Scientists have discovered that before the present island of Kameni inside the famous Caldera of Santorini, created after the eruption of the volcano some 3600 years ago, there was a much older Kameni at about the same point, which was completely destroyed by the volcanic eruption, an Athens-Macedonian News Agency report says. 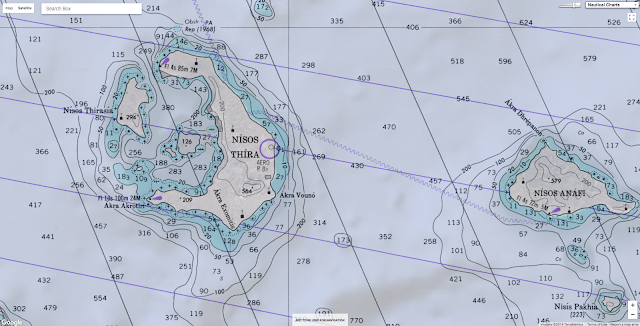 For the first time, Greek and international scientists who studied the underwater remnants at the bottom of that Minoan eruption, as well as the Andesian lava pieces in the pumice stone, proceeded to reconstitute the so-called pre-Kameni Caldera and estimated its extent, the way it was created and its age.

About 22,000 years ago another big explosion had taken place in Thira — the so-called Riva explosion, from which a large semi-caldera was built.
Inside it, an island was formed, the pre-Kameni, which was later destroyed, along with parts of Thira and Thirassia and it was gradually raised within it during the most recent Minoan eruption. 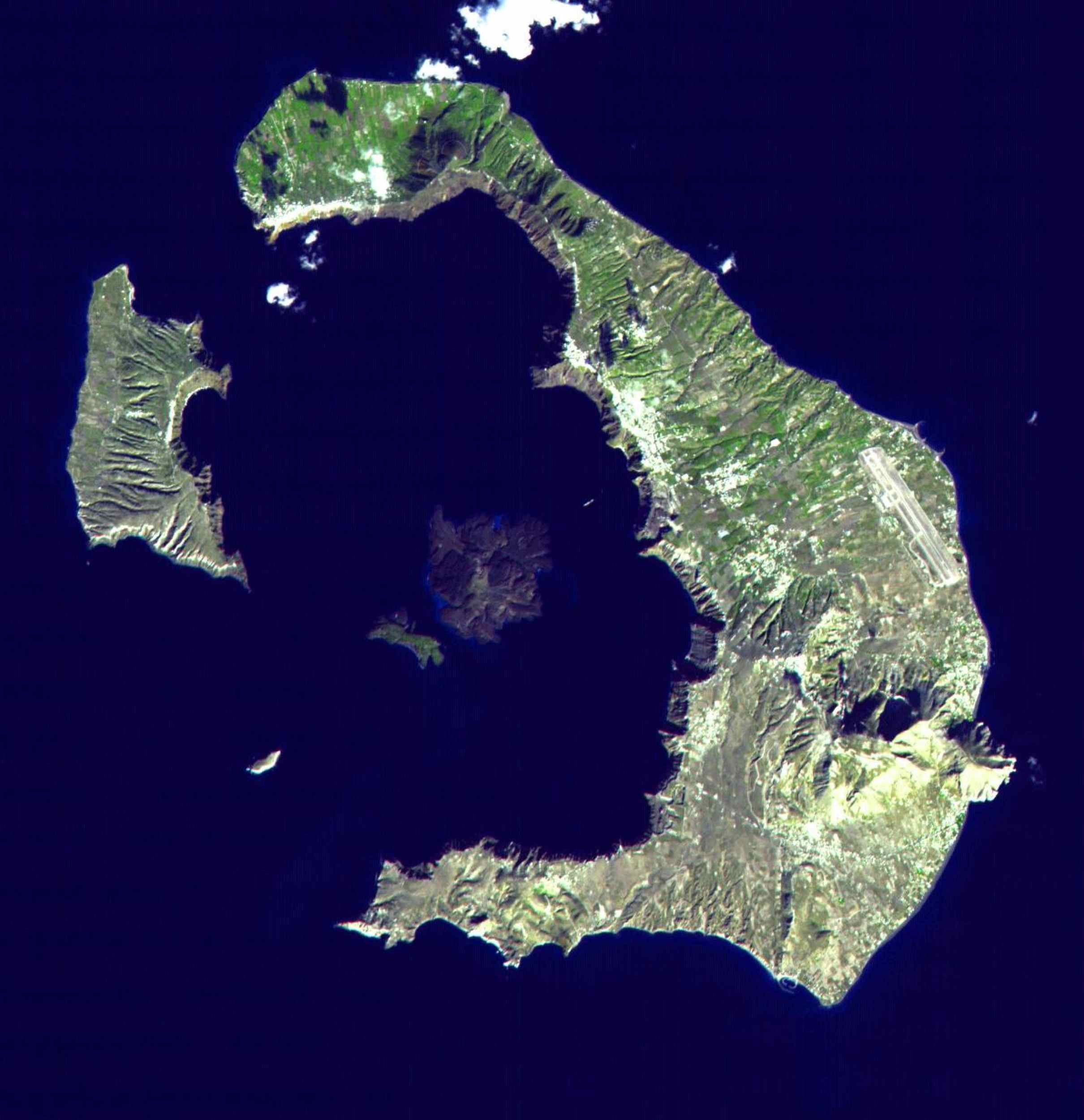 This ASTER image of Santorini was acquired on November 21, 2000 and covers an area of 18 by 18 km. (courtesy of NASA)
The eruption of Santorini in 1650 B.C. was one of the largest in the last 10,000 years.
About 30 cubic kilometers of magma was erupted, forming a plinian column 36 km high.
The removal of such a large volume of magma caused the volcano to collapse, producing a caldera. Ash fell over a large area of the eastern Mediterranean.
The eruption probably caused the end of the Minoan civilization on the island of Crete.
The largest island is Thera, and the smaller is Therasia.
The Kameni Islands (dark in the image center) formed after the caldera., with the most recent eruptions occurring in 1950. 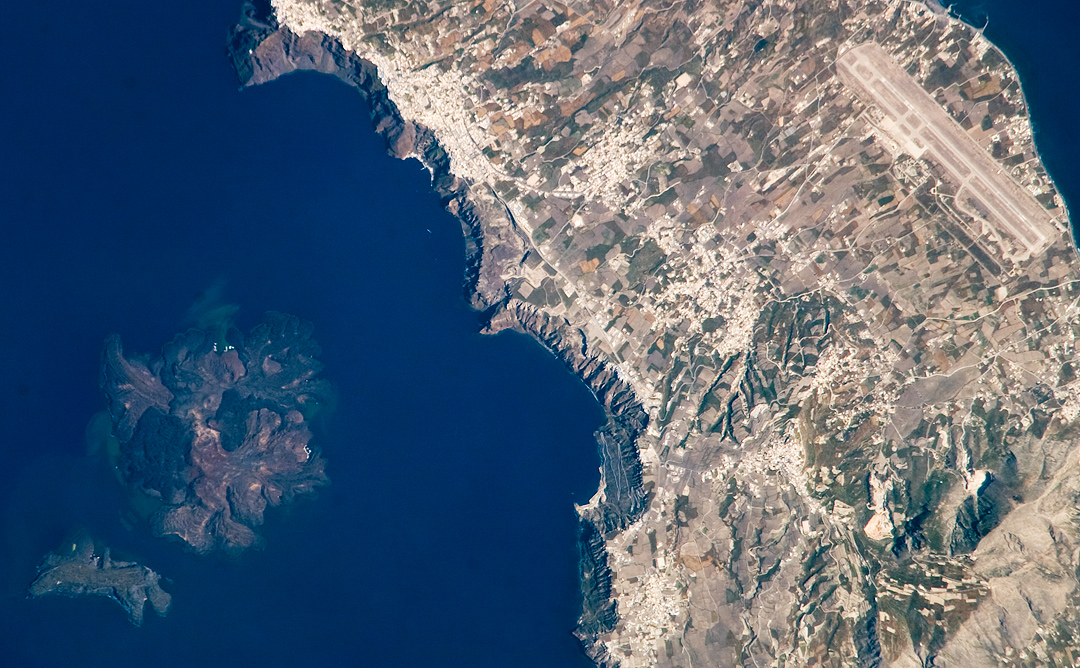 Researchers, used photostatistics, granulometry and other techniques to estimate that the pre-Kameni had a volume of 2.2 to 2.5 cubic kilometers, compared to 3.2 cubic kilometers of today’s Old and New Kameni. According to Dr David Karaton who is an expert in Volcanology, “the topographic relief of Santorini before the Minoan eruption was characterized by a smaller port along with a central island, almost similar to today’s Kameni, according to many researchers.
But the size and age of this island had remained unknown. In our new study, we rebuilt the pre-Minoan island with the name Pro-Kameni in size and age.”
As the Hungarian researcher says, “we focused our attention on the most characteristic lithic andesitic specimens found in the Minoan pumice, which represent the explosive material from Pre-Kameni.
“Applying a photo-statistical analysis, we calculated the volume of Pre-Kameni at 2.2 to 2.5 cubic kilometers, which is smaller than the volume of Old and New Kameni.
“We also determined the age of the andesite fragments, using the Cassignol-Gillot K-Ar method, 20,000 years ago today, which means that Pre-Kahnem began to grow very soon after the previous Riva eruption 22,000 years ago.”

According to the new study, after the powerful Riva explosion that preceded the Minoan era, the pre-Minoan landscape of Santorini was dominated by a shallow, flooded caldera, where slowly, as lava came out of the underwater volcano, the pre-Kameni ascended.

Until now only very uncertain estimates could be made about its size and age.

Assistant Professor Paraskevi Nomikou of the Department of Geology and Geo environment of the University of Athens who participated in the study told AMNA that, “the pre-Minoan caldera was smaller than today, closed in the southwest and with only one small opening in the northwest with a narrow channel.
“At the center of the shallow, flooded caldera there was a smaller than today’s pre-Kameni with a low volcanic cone.”

Combined bathymetric and topographic map of Santorini Caldera with 15-m grid resolution.
The study area encompassing the Kameni islands is located in the centre of the Santorini caldera
see : The emergence and growth of a submarine volcano: The Kameni islands, Santorini (Greece)
Oceanographic signatures and pressure monitoring of seafloor vertical deformation in near-coastal, shallow-water areas: a case study from Santorini Caldera

Pre-Kameni was developed very quickly after the Riva explosion, with a minimum lava flow rate of 0.13 to 0.14 cubic kilometers per millennium.
This rate is much slower – about a seventh – than the average rate of expansion of today’s Old and New Kameni after 1600 BC, estimated at about 0.9 cubic kilometers per millennium.
The explosion of Thira between 1627-1600 BC during the Late Bronze Age (Minoan) was one of the largest.
The products of the explosion are estimated to have a volume of 117 to 129 cubic kilometers, equivalent to 78 to 86 cubic kilometers of dense rocks.
A part of these pyroclastic deposits on the seabed of Santorini comes from the pre-existing Kameni, which was completely dissolved by the eruption.
Its composition of black glassy andesite, which is geochemically distinct, allowed scientists to identify which products of the explosion came from pre-Kameni and which from Thira.