We wanted to see if we could visualize the so-called ocean garbage patches.
We start with data from floating, scientific buoys that NOAA has been distributing in the oceans for the last 35-year represented here as white dots.
Let's speed up time to see where the buoys go...
Since new buoys are continually released, it's hard to tell where older buoys move to.
Let's clear the map and add the starting locations of all the buoys...
Interesting patterns appear all over the place.
Lines of buoys are due to ships and planes that released buoys periodically.
If we let all of the buoys go at the same time, we can observe buoy migration patterns.
The number of buoys decreases because some buoys don't last as long as others.
The buoys migrate to five known gyres also called ocean garbage patches.
We can also see this in a computational model of ocean currents called ECCO-2.
We release particles evenly around the world and let the modeled currents carry the particles.
The particles from the model also migrate to the garbage patches.
Even though the retimed buoys and modeled particles did not react to currents at the same times, the fact that the data tend to accumulate in the same regions shows how robust the result is.
The dataset used for the ocean buoy visualization is the Global Drifter Database from the GDP Drifter Data Assembly Center, part of the NOAA Atlantic Oceanographic & Meteorological Laboratory.
The data covered the period February 1979 through September 2013.
Although the actual dataset has a wealth of data, including surface temperatures, salinities, etc., only the buoy positions were used in the visualization.

The European Space Agency is developing technology to allow satellites to identify the concentration, movement and origin of plastic debris across the world’s oceans.

Paolo Corradi and Luca Maresi had the same idea: tracking plastic trash from space.
Corradi, an engineer with the European Space Agency’s (ESA) optics division in the Netherlands, had been hearing about plastic marine litter from a friend at a nonprofit working on the issue.
Maresi, Corradi’s boss, had seen the problem firsthand during sailing trips.
“We actually had the same study idea independently and inspired by different reasons,” Corradi said. 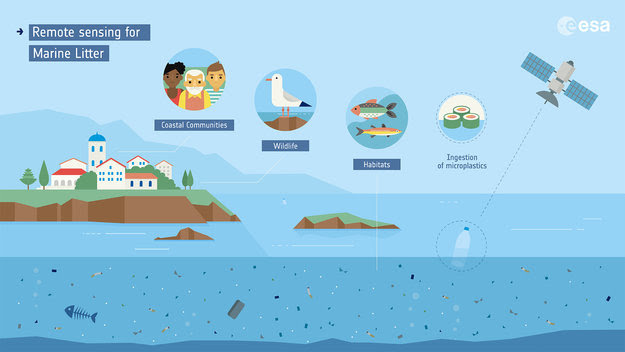 The men figured that deploying satellites to monitor marine litter on a global scale could give researchers working on plastic pollution data about its abundance, concentrations and movement.
But it remains to be seen whether such satellite tracking will be possible and whether it will be useful in the effort to combat a huge and growing problem that has spawned “gyres” of plastic trash in the world’s oceans.

ESA began the effort in September.
For now, Corradi says, the goal is to demonstrate the feasibility of remote sensing of plastic litter with satellites.
Eventually, the scientists would like to be able to provide data that could produce a map of global concentrations of the plastic debris. 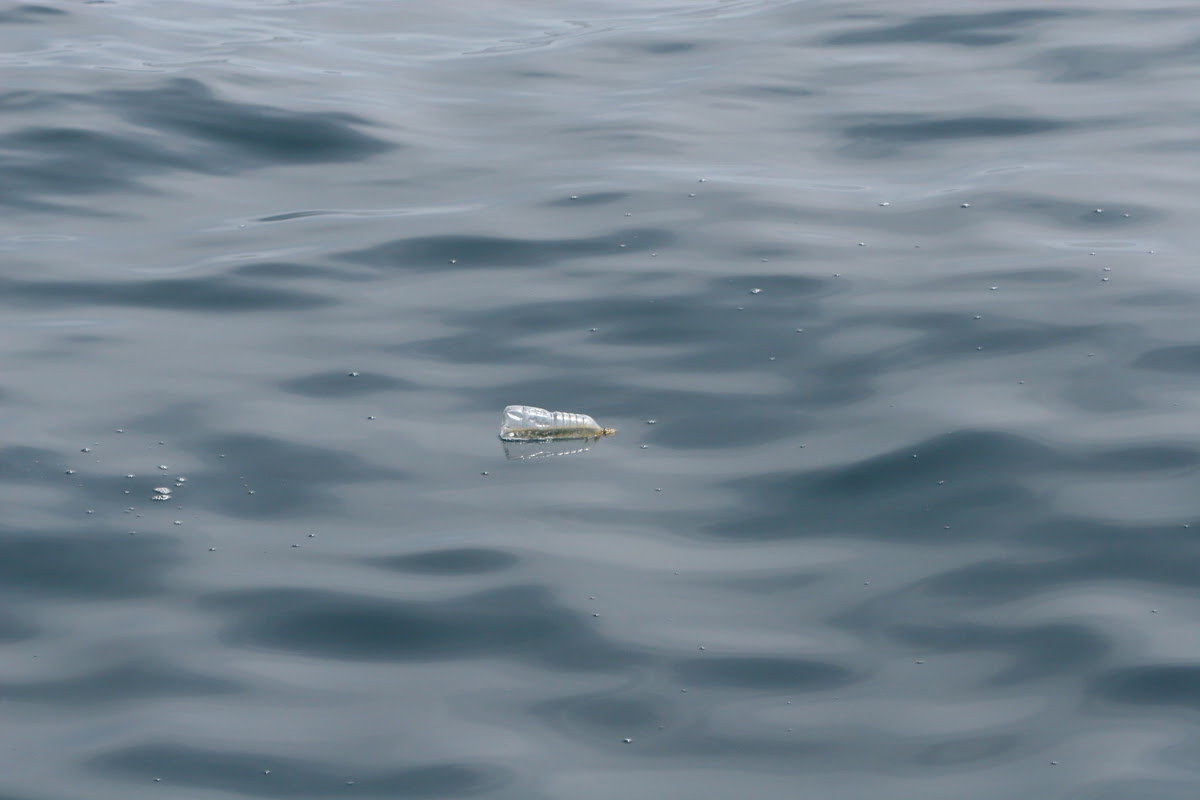 A floating plastic bottle photographed at the US Cordell Bank National Marine Sanctuary in the Pacific, off the US West Coast. (NOAA)

That data, the researchers said at a conference last month, could be a way to validate current models and increase certainty about how ocean plastic pollution is accumulating and moving – and its origin.
That would potentially lead to more targeted actions to combat it.
“And in that sense, the time evolution of such a concentration map would also provide a tool to monitor the effectiveness of the measures put in place to solve the problem,” Corradi said.

The project, called OptiMAL (Optical methods for Marine Litter detection), is initially focused on detecting microplastics on or near the surface of the ocean as well as larger pieces of plastic along shorelines.
So far the researchers have used images from the satellite Sentinel-3 and checked them against ground and aerial surveys.

Now they’re trying to develop ways of identifying marine debris using “optical reflectance properties in the visible and infrared light spectrum,” Corradi said.
In other words, whether plastics can be identified in the ocean from the way floating debris reflects different wavelengths of sunlight.
He noted that satellites detect phytoplankton in a similar way. 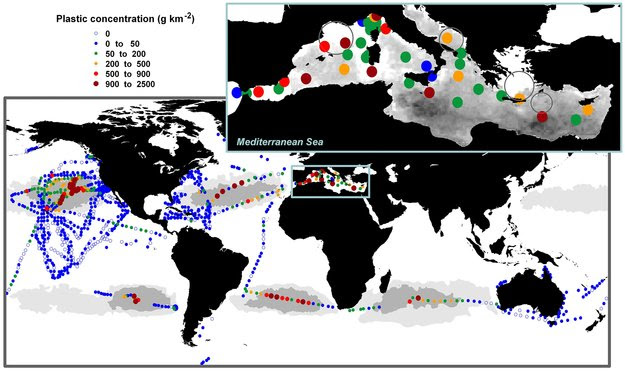 If all goes according to plan, the scientists will collect the spectral signals of plastic at sea for different types of material in varying states of degradation and concentrations.
The signals would then be entered into computer models that would simulate how those signals would look through the atmosphere, which would indicate whether it’s possible for a satellite orbiting the Earth to detect those signals and, if so, how.
“We should be able to report our first results by the end of this year,” Corradi said.

It could mean using existing satellites or even being able to detect plastics in current satellite images.
But Corradi notes that “none of these (existing) orbiting instruments was designed with the goal to look for plastic marine litter and it is still not clear what to look for in the data.”
If all works out and the researchers receive strong enough signals to be able to detect plastics, they can start to build algorithms that might be able to detect and quantify concentrations of plastic litter.
If so, they’ll be breaking new ground in the fight against plastic pollution, though cleanup advocates are uncertain the gains will be worth the effort.

It’s not the first project to map marine plastic pollution on a global scale.
German researchers put together an interactive map last year, for instance, by compiling the data from more than a thousand studies.

Global map with each country shaded according to th estimated mass of mismanaged plastic waste
(millions of tonnes -MT- fenerated in 2010 by populations living within 50 km of the coast, considering 192 countries (countries not included in the study are shaded white)

Marcus Eriksen, cofounder of the 5 Gyres Institute, which works to combat “the global health crisis of plastic pollution,” says he’s seen other efforts to aerially monitor ocean plastic pollution.
But those have been aerial inspections conducted by a plane or drone and typically focus on a single region, such as a survey of plastic in Hawaiian waters last year.
“No one has been able to do it from outer space,” Eriksen said.
“I’ve heard a lot of talk, but haven’t seen anyone make a valiant effort.”

But he sees several challenges with the satellite strategy.
Most ocean plastic is covered in algae and other marine life, and much of it would be widely dispersed, making it harder to detect.


The Great Pacific Garbage Patch is the largest accumulation of ocean plastic in the world and is located between Hawaii and California.
Scientists of The Ocean Cleanup Foundation have conducted the most extensive analysis ever of this area.
courtesy of the Ocean Cleanup

There could be another problem even if researchers overcome those issues, though.
Eriksen imagines satellites would only be able to see what’s on the sea’s surface.
“To be honest, what’s on the surface isn’t the bulk of the issue,” he said.
“What’s below the surface is really impossible to tell.”
In 2014, Eriksen estimated that there was 250,000 metric tons of plastic floating on the surface of the ocean.
(That survey was visualized on a map made by New Zealand designers last year.)

But a 2015 study estimated the amount of plastic waste making its way from cities into the oceans at 4.8 to 12.7 million metric tons.
That could mean at least 4.5 million metric tons are beneath the ocean’s surface, likely out of the reach of satellite sensors.

Eriksen does think surveys from the air – or space – could be useful in quantifying fishing gear debris as good data could allow policymakers and industry to address so-called “ghost gear.”
“The more data we have on that, the easier it is to make a case,” he said.
But Eriksen said tackling the ocean plastic pollution crisis also requires understanding the flow of debris from land to sea.
“We have so little river data,” he said.