Why shark attacks are on the rise in Réunion

For decades residents of Reunion, a small French Territory in the middle of the Indian Ocean, lived in relative harmony with the surrounding ocean and its inhabitants.
However, since 2011, a rise in shark attacks has forced many to come to terms with the spike in fatal encounters with sharks and turn to science to address this unexplained phenomenon

From The Economist by S.M.M.S.

When Julian Creedon moved from Jersey to Réunion in 2006 the island seemed like a surfer’s paradise: “White beaches, epic waves, it was perfect.”
But last month Alexandre Naussance, a 26-year-old fellow surfer, became the eighth person to be killed by a shark in the waters around the island since 2011.
In the past six years 20 people have been attacked by sharks in Réunion.
In terms of deaths, the tiny island takes first place.
Why have the waters around Réunion become so dangerous?

A decade ago, shark attacks in Réunion were rare.
They also mainly occurred away from the island’s western coastline, the most popular with tourists and surfers.
“Everything changed in 2011,” says Mr Creedon.
That year alone there were six shark attacks, five of which took place around the tourist hub of St-Gilles-les-Bains.

Since then the numbers have steadily risen, with three attacks within six months in 2013, including two fatalities.
One of these was a 15-year-old French girl who was swimming just five metres out from the beach in St Paul when she was attacked.
Her death caused a public outcry.
Local authorities implemented a ban on swimming and water sports across almost all of Réunion’s beaches.
Despite the rising death toll, locals and tourists continue to ignore warnings (though in the case of Mr Naussance the warning signs had been sawed off the previous weekend). 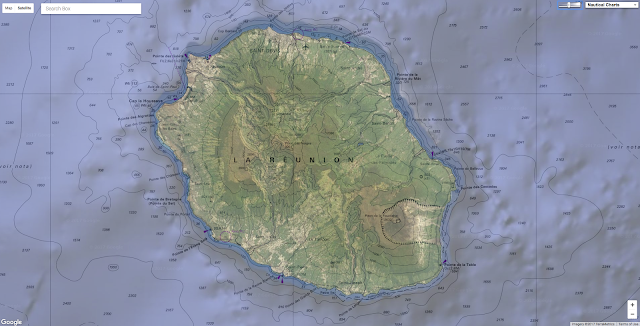 The sharp rise in attacks is the cause of much debate in Réunion.
Many locals blame the government’s ban on shark meat in the 1990s, or the creation of a protected marine nature reserve along the west coast in 2007.
Experts say it is unlikely that either of these factors is responsible.
Some argue that the overfishing of other species has had an impact on shark behaviour.
Dwindling fish stocks make hungry sharks more likely to come in to shore in search of food.
Others suggest environmental damage caused by Réunion’s growing population, and urban development along its western coastline.
The geology of the island also contributes: steep volcanic slopes mean rainfall quickly washes waste and debris down into the sea.
The murkier water is appealing to bull sharks, the prime culprits.
The sharp drops and deep waters around the island also allow both bull and tiger sharks, which usually remain in the ocean’s depths, to glide all the way up to the beaches with ease.

The island is paying a high price.
The government has spent millions on anti-shark defences, with limited success.
The attack count continues to rise, while tourism to the island, a French overseas department with one of the highest unemployment rates in France, continues to suffer.
Despite a slight resurgence last year, the number of visitors has not returned to 2011 levels.
With just 450,000 visitors in 2016, the tourist economy of Réunion is dwarfed by that of neighbouring Mauritius, which received over 1m people.
Since this latest attack, there have been renewed calls for a large-scale shark cull around Réunion to protect surfers and, with them, the struggling tourist industry.
Conservationists and marine biologists however say this would only be a short-term fix; such a cull would harm the ecosystem.
In the long run more research into shark behaviour could help predict attacks—but would be costlier than culling.