The map shows the location of the Joint Petroleum Development Area (JPDA) within the Timor Sea between Australia and Timor-Leste.
It also marks the 1972 Australia-Indonesia Seabed Boundary and Timor Trough.
The Bayu/Undan, Elang and Jahal oil and gas fields lie within the JPDA.
The Greater Sunrise Unit Area lies partly within the JPDA and partly in Australian seabed jurisdiction to the east of the JPDA and south of the 1972 Australia-Indonesia Seabed Boundary.
courtesy DFAT

From LowyInterpreter by Stephan Grenville

The shadow foreign minister's proposal to take the Timor maritime boundary to international arbitration if an agreement cannot be reached has triggered an interesting Interpreter discussion here (with five comments), here and here.
There is still a wide range of opinion on this complex and vexed topic, but it should be possible to clear away some of the more obvious misunderstandings and set out the issues which need to be settled between competing judgments.
First, many of the simplistic statements are wrong (e.g. Tom Allard 'If the boundary was drawn midway between East Timor and Australia — as is standard under international law — most of the oil and gas reserves would lie within Timor's territory.').

If the east-west border were to be drawn at equidistance, it would, in effect, give Timor the Joint Petroleum Development Area (JPDA).
This would mean that instead of getting 90% of the current revenue, Timor would receive 100%.
But this would also mean that, when Greater Sunrise comes on stream, Timor would receive around 20% of its revenue, instead of the 50% agreed in the 2006 CMATS treaty.
As Sunrise has not yet been developed, it's not possible to know exactly what this means in terms of revenue, but Sunrise is usually said to be 2-3 times as big as Bayu Undan, the main resource within the JPDA.
Thus if drawing this border at equidistance was the only change, Timor would gain a further 10% of current production in the JPDA and lose 30% of Sunrise's potential revenue.
In total, very likely to be less than under CMATS. 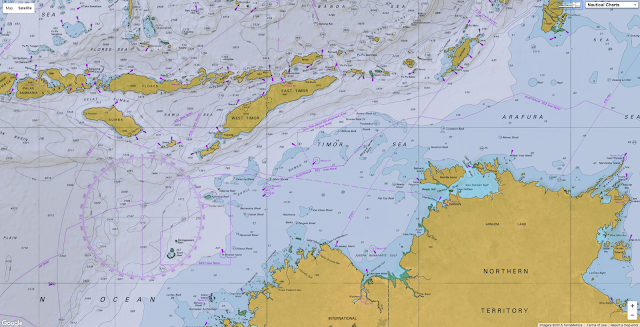 Of course there is much, much more.
Timor doesn't just want to draw an equidistant east-west boundary; it wants to shift the 'laterals' (the sides of the JPDA), extending the yellow area down to the median line on this La'o Hamutuk chart here.
The JPDA laterals were drawn as 'simplified equidistance' from Indonesia and Timor.
'Equidistance' is not so straightforward with the laterals, and  widening them would almost certainly involves Indonesia, if only because this would encroach on Indonesia's Exclusive Economic Zone (EEZ) covering the water column (but not the seabed).
This was set down in the 1997 agreement with Australia that is signed but not ratified, although this EEZ is recognised as a practical matter (e.g. for fishing supervision) and on maritime charts.

But if we ignore the problem of the EEZ for the moment, and focus just on the geography of 'equidistance', my amateur reading is that the closest we have to an objective expert assessment on the exact geography is here, which sets out clearly the alternative ways of drawing the laterals, including those claimed by Timor and those discussed in the 'Lowe opinion' (put forward by Petrotimor, an American company which had been given exploration rights in the disputed area by the Portuguese authorities in 1974).
Among the numerous permutations shown, all except the Timorese claim and the Lowe opinion cluster around the existing laterals (see Charts 34-41).

The Lowe opinion actually gives rather modest support to shifting the laterals.
It explores the idea of modifying the current Indonesian baselines for the purpose of drawing the laterals, so as to diminish the importance of some sparsely-populated Indonesian islands and to draw the laterals on the basis of 'opposite coastlines' rather than equidistance based on the locus of points equidistant from the closest point on the baselines.
The effect is to create an eastern lateral which puts most of Sunrise in Timor territory (see Charts 17-19), even though the bulk of Sunrise is indisputably closer to Indonesia than it is to Timor.
This is clever advocacy, but in the end the Lowe opinion accepts that 'the JPDA is the area to which we consider that East Timor has a good legal claim at present'.

If this wasn't complicated enough, another argument (see Bernard Collaery's comment here) is that because Timor and Indonesian territories form a concave arc, an equidistant lateral border would give less marine boundary to Timor than it would have if the two countries lay on a straight line and the lateral was drawn perpendicular to this straight line (the 'pinch-in' effect).
But of course Indonesia could make exactly the same argument to justify swinging the border more to the west.

Second, what about the equally vexed issue of the continental shelf
It is certainly not true that UNCLOS fixes borders on the basis of equidistance rather than the continental shelf.
In fact the 11 articles of Part VI of UNCLOS specifically address the continental shelf and its 'natural prolongation' beyond 200 nautical miles.
As for the specific application to Australia, to argue — as Michael Leach does — that 'Timor-Leste stands as the sole exception' to equidistance is wrong, as a glance at this chart will show:

Since 1953 or earlier, Australia has based its maritime borders on the continental shelf.
The vast majority of Australia's boundaries are drawn this way, and all these have been specifically endorsed by UNCLOS' Commission on the Limits of the Continental Shelf.
The exceptions are where our continental shelf extends to the shelf of a neighbouring country, where the border is drawn on the basis of equidistance.
There is, of course, one notable precedent where the continental shelf over-rode equidistance, and that is the 1972 treaty with Indonesia.
Even here, equidistance played a role, with more than 500km of the border (essentially the area adjacent to Irian) being based on equidistance.
Third, let's look at what UNCLOS actually says.

Article 15 has the only mention of 'equidistance':

Article 84 specifically addresses the case of the continental shelf.
In part, it says:


The delimitation of the continental shelf between States with opposite or adjacent coasts shall be effected by agreement on the basis of international law, as referred to in Article 38 of the Statute of the International Court of Justice, in order to achieve an equitable solution.

Not much help to either side here; there is no mention of 'equidistance'.
The first priority is to reach agreement, and if this can't be done, then it has to be sorted out by international dispute settlement.
Thus it is in dispute settlement, outside UNCLOS itself, that these issues have been adjudicated.
Through that process in recent decades the continental shelf has lost ground to the equidistance principle, largely because in almost all cases the continental shelf is shared by the countries in dispute.
Rather than adjudicate on the esoteric geological advice (which seems to be able to support any position), the courts have in effect taken the easy way out and decided on the basis of equidistance, sometimes with some attempt to take account of whatever 'equitable' means.

So how is a dispute likely to go if put to the international courts, as Labor is offering?
Because the over-riding principle in UNCLOS is 'equitable', the outcome could be anywhere.
But we might be able to narrow it down a bit.
On the east-west boundary, it is likely that 'equidistance' would prevail, despite the fact that the Timor Trench is well defined and is 2-3 kilometers deep.
On the laterals, there might be minor refinement, but the existing ones are so close to Article 15's 'equidistant from the nearest points on the baseline' that it's hard to see any of the Lowe arguments or the 'pinch-in' argument gaining traction.
To shift the laterals so that Sunrise is largely in Timorese territory would infringe UNCLOS' central 'equidistant' principle, as the bulk of Sunrise is indisputably closer to Indonesia than it is to Timor. Shifting the laterals would also encroach onto Indonesia's agreed EEZ (which just applies to the seabed water column*, but would be an endorsement of the separation of seabed and EEZ, which arbitrators will be reluctant to do).

How would this leave the various parties?
Michael Leach is too optimistic when he says: 'There is little question that a negotiated settlement of maritime boundaries, if it reflected median line principles, would remove the major irritant in the relationship for good'.
Timor would have lost what it considers to be its birthright — widened laterals including Sunrise. It might not even get the whole of the JPDA (see the discussion in the Lowe opinion).
Even if it did, it would almost certainly have less revenue from the known resources, and would have little leverage to get Sunrise gas piped to Timor, for the much-hoped-for LNG industry on Timor's southern coast.

Indonesia would be very unhappy with a much more favourable border adjacent to theirs.
Mochtar Kusumaatmadja, Indonesia's highly-regarded former foreign minister, who was closely involved in the 1972 treaty, says 'they were taken to the cleaners'.
If Timor did succeed in having the laterals shifted, Indonesia would be angrier still.
It has plenty of ways to make things more difficult for either Timor or Australia, or both.

As for Australia, just as many Australians might be surprised to know that we don't yet have a maritime border with Timor, they might be even more surprised to learn that getting such a border settlement involves giving up part of the continental shelf, which they may have thought belonged to us.
Let's see whether the groundswell of public support for Timor's position remains as strong when the press headline is: 'Labor offers to give away our continental shelf'.

I'll address two related issues in a later (shorter, I promise!) post: on the virtues of 'rules-based international order' and the shameful ASIS spying on Timor.