From Slate by Eric Holthaus

The most important consequence of the Paris climate talks will be the fate of the oceans.
On Nov. 30, more than 140 world leaders, including President Obama, will meet in Paris for the beginning of a historic two-week conference on climate change.
There’s already been a flurry of voluntary national pledges, increasing confidence that the meeting will likely result in the first global agreement on emissions reductions.
What they won’t be discussing, however (due to diplomatic quirks), is the effect of climate change on the world’s largest and most important ecosystem: the oceans.

While COP21 is inaugurating a new phase of commitment on climate, the Ocean Climate Platform disclosed the content of its advocacy in order for ocean and coastal zones related issues to be gradually taken into consideration via specific measures and included in the various axes of negotiation.
Oceans are a major global climate regulator: they cover 71% of the surface of the Globe, they produce over 50% of the oxygen in the air we breathe, they absorb approximately 30% of the CO2 and 93% of the excess heat generated by human activity.
Limiting global warming to 2 degrees Celsius, or even 1.5 degrees Celsius, is essential to maintain the regulation capacity of oceans and to limit the current changes.
In support of an ambitious universal and legally binding agreement, the Ocean Climate Platform points out that, Oceans remain the forgotten piece in the climate negotiation puzzle.

That’s a shame.
As I wrote this summer in Rolling Stone, there’s increasing evidence that the world’s oceans are nearing the point of no return.
They’re getting hit with a double whammy—rising temperatures and acidification—that together are forcing fundamental changes to the basis of the planet’s food chain.
So far, the oceans have absorbed about 93 percent of all the additional heat energy trapped by rising greenhouse gas concentrations.
That’s already prompted the loss of about 40 percent of the world’s coral reefs, accelerated by a series of worldwide bleaching events in which exceptionally warm water temperatures prompt normally symbiotic algae to become toxic—the most recent of which was just this year.
Since coral reefs—the “rainforests of the sea”—support a quarter of all marine life on just 0.1 percent of the ocean area, a mass extinction may already be underway.
If we lose the oceans, we lose everything. 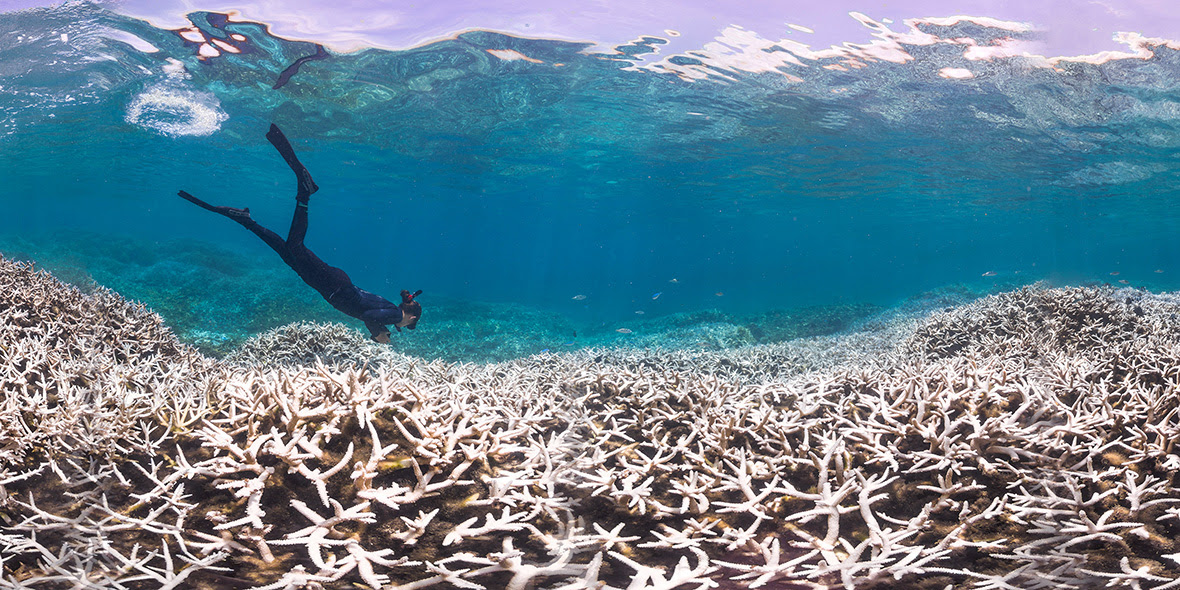 Water temperatures this year in the North Pacific have surged to record highs far beyond any previous measurements.
That means krill and anchovies have been forced into a narrow corridor of relatively cooler water close to the shore, and predators like whales are feasting on the dregs of an ecosystem.
Along the coast of California, there’ve been sightings of rarely present species such as white pelicans, flying fish, Mexican red crabs, and nearly extinct basking sharks.
Last year, a subtropical Humboldt squid was caught in southern Alaska—along with a thresher shark that was also far from its natural range.
After a startling number of starving baby California sea lions began washing up on shore a couple of years ago, a colony has taken up residence in the Columbia River in Oregon.
Marine life is moving north, adapting in real-time to the warming ocean.
But for how much longer?
This year’s record-setting El Niño is fast-forwarding the effects of climate change, and it’s hitting the oceans hardest. As the ocean warms, coral reefs are already faltering.
Sharks, which have been around for 450 million years—about 100 times longer than our hominid family—are vitally dependent on coral reefs.
If all the other stresses they face don’t do it, the loss of the world’s reefs might do them in.

An even worse problem than rising ocean temperatures is acidification.
As the oceans absorb carbon dioxide from the atmosphere, it’s converted into carbonic acid—and the pH of seawater declines.
This is like being trapped in an acid bath for marine animals with hard shells.
A striking study last year showed that tiny snails are already having their shells dissolved.
Another study this July said that a continuation of business as usual would force an “effectively irreversible” change on ocean ecosystems this century.
It gets worse.
If we can’t count on the ocean’s productivity, what else may begin to unravel?
Plankton produce half of the world’s atmospheric oxygen, and oxygen levels are already declining.
There’s no serious threat—yet—to those of us who breathe air, but with the Earth going through geological-scale changes in the span of a single human lifetime, it may not always be that way.

This is what is meant by the phrase: tipping point.
To use an obvious pun, our planet is in hot water.
For some perspective on mass extinctions, I spoke with Jacquelyn Gill, a paleoecologist at the University of Maine.
Her Twitter profile features a family of peaceful-looking wooly mammoths.
“Life is incredibly resilient, and it’s one of the things that gives me a lot of hope,” she said, “but at the same time, we are tweaking the knobs and dials of the planetary system in new ways and in much more rapid ways than it’s experienced in the past.”
I asked her what she meant by “in the past.”
Her answer: “In the entire Earth’s history … 4.5 billion years.”

Airport Reef during the bleaching, in February 2015.
Photo by XL Catlin Seaview Survey

Some scientists, like the University of Hawaii’s Ruth Gates, have begun to bridge the gap between conservation and mainstream oceanography.
Gates and her team are using a technique called “assisted evolution” to essentially breed generations of new coral ecosystems suited for the Anthropocene, which they plan on eventually transplanting back into wild reefs.
Barring relatively bold action in forums like the Paris meeting, Gill isn’t convinced that even these novel conservation methods will be enough to keep the oceans in a recognizable state by the end of the century.
“There is such a thing as a point of no return in the environment,” she told me.
“My concern is, by the time we get governments and citizens on board, it’ll be too late.”
What does too late mean?

Ecologist Carl Safina knows the ocean well, but he doesn’t like to talk about tipping points.
One of the most common questions he fields these days, which I was guilty of, is: “How much time is left?”
“The real answer,” Safina told me, “is that rapid changes are already happening, and they’ve been happening for some time. The evidence and consequence of them is pretty much everywhere you look in the natural world, and it’s very evident in many places in the ocean.”
Safina said that thinking of environmental problems in terms of tipping points, especially those in the ocean, forces people into two opposite camps: the fatalists, and the deniers.
By talking past each other, Safina said, “we’ve created a problem of such magnitude, with so many implications, that we have kind of allowed ourselves to be paralyzed into doing what is easiest, which is essentially nothing.”
In his decades of environmental advocacy, Safina has noticed what he thinks is a fatal flaw in humanity: “We think that our capacity for technology means that we can do anything.”
But climate change is something different.
For the first time in Earth’s 4.5 billion–year history, a single species has put the lives of nearly all others in jeopardy.
Now that we’ve finally realized the mess we’re in, we can’t seem to stop perpetuating it.
“There are problems that humans simply might not be psychologically and sociologically capable of dealing with appropriately on the appropriate time scale,” Safina said.

Which brings us to the climate summit in Paris.
The terrorist attacks of a few weeks ago are still fresh wounds.
In the days immediately following, it was briefly an open question whether the talks might be canceled for security reasons.
Ultimately, several unofficial but important aspects of the meetings were, in fact, canceled—and that’s unfortunate, but understandable.
But the most heartwarming response was from the French president, François Hollande, who refused to entertain any discussion of canceling the talks.
He called the forthcoming climate summit “a time of hope and solidarity.”
Let’s hope that beautiful sentiment is enough to inspire real progress.
That’s the biggest problem with climate change action—the plankton, mollusks, and corals have no seat at the table.
If—selfishly, even!—we want to have a planet where human civilization can thrive for decades and centuries to come, we can’t forget about the oceans.