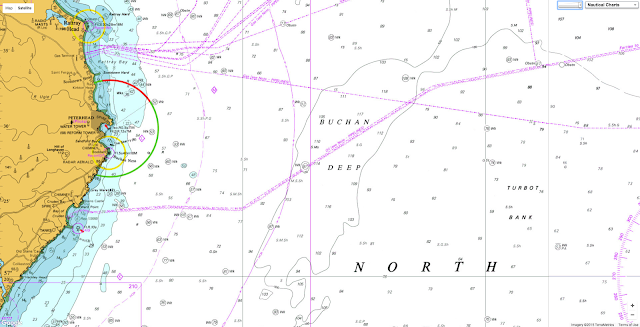 In a deal between the Scottish government and Norwegian oil company Statoil, five wind turbines with a capacity of six megawatts each will be set on floating structures some 15 miles (25 km) off the northeast coast of Scotland near Peterhead.
The Hywind pilot park, as it's named, is claimed to be the first floating wind farm in the world, and will generate enough power for 20,000 homes with operations expected to start in late 2017.

The Hywind turbines will share infrastructure such as power cables and transmission facilities
(Credit: Statoil ASA)

Floating wind turbines can be placed away from the coast in deeper water as they don't need to be anchored to sea floor-mounted towers, which are typically limited to a water depth of up to 260 ft (80 m).
The optimal water depth for fixed turbines is 65 to 165 ft (20-50 m), however two-thirds of North Sea waters are between 160 and 720 ft (49 and 220 m) in depth.

There are several advantages to locating away from shore, including reduced visual pollution – meaning they won't spoil anyone's view, which is a common complaint by some coastal residents.
They can also reap the benefits of stronger and more consistent winds typically found farther out at sea since they aren't impeded by land features.

Floating wind farms are also less likely to interfere with fishing or shipping activity, and by stringing the turbines together in a farm, they can share a common infrastructure, such as power cables and transmission facilities. 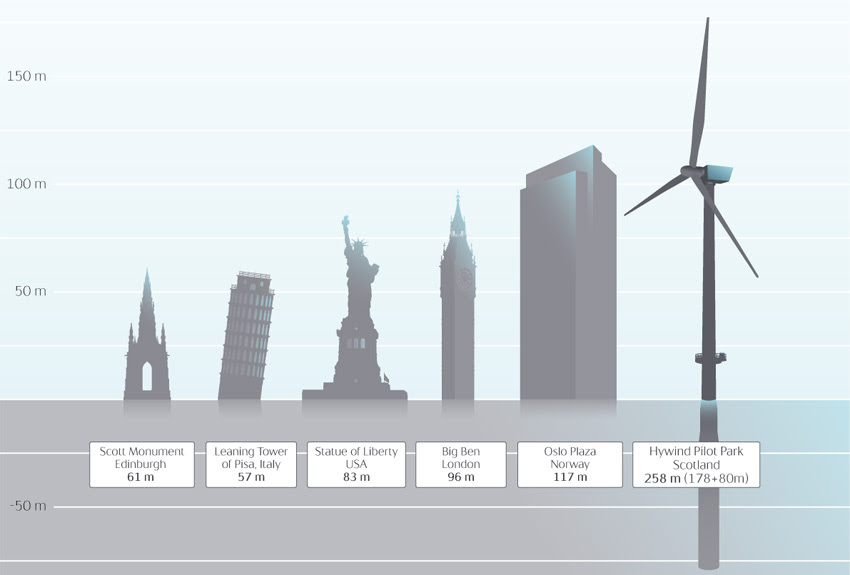 Size of the floating wind turbine

The Hywind floating wind turbine technology has been in development for six years, with a 2.3-megawatt prototype installed in 720 ft (220 m) of water 6.5 miles (10 km) from the Norwegian island of Karmøy in 2009.
It was the first large-capacity floating wind turbine to be put in use.
The turbine generates 7.3 GWh, and has ably survived 36 ft (11 m) waves.

Like the turbine off Karmøy, the Hywind Scotland pilot park turbines will be moored by catenary cables to a single floating cylindrical spar buoy.
The ballasted catenary adds 60 tons (54 tonnes) of weight hanging from the midpoint of each anchor cable for added tension.