New technology allows the public to track the movement of great white sharks as they travel along the Central Coast.
These new tracking devices might give swimmers a little sense of relief, but that's not what their intention is.

Marine biologists have been working for years to learn more about the behavior and swim patterns of great whites.
Marine biologist Dr. Randy Kochevar has made shark encounters a focus of his research.
Following the migrating patterns of sharks, he found the great whites along the Central Coast spend half of their time close to shore and half in deeper water.
"Once we started to identify these hot spots where they come and go to we started exploring new technologies that would allow us to monitor their coming and going from these areas," says Dr. Kochevar, marine biologist with Stanford University's Hopkins Marine Station. 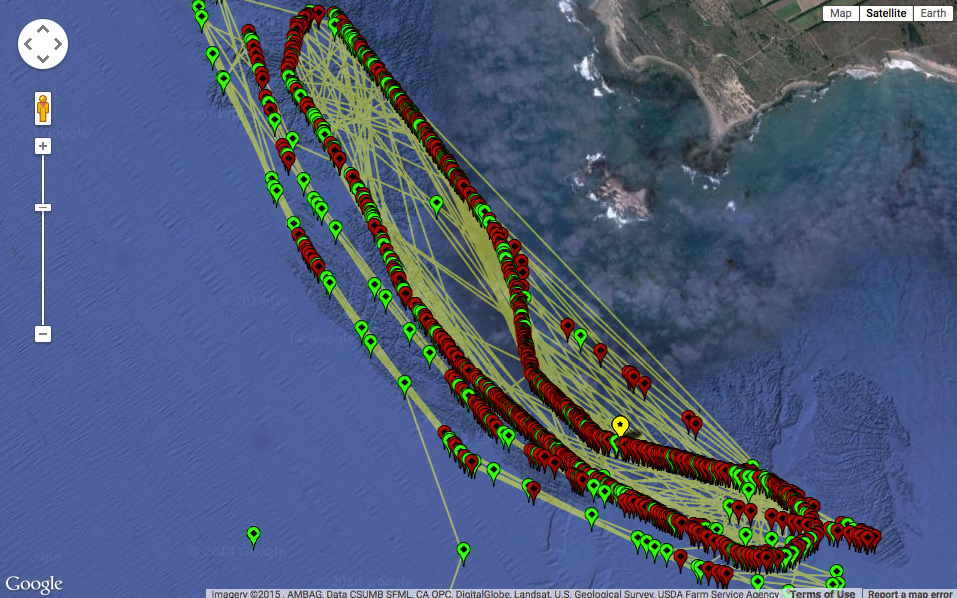 This map shows the tracks of the currently deployed Wave Glider, which is equipped with an acoustic receiver which is listening for white sharks carrying acoustic tags.
The current position of the glider is indicated by a yellow marker with a star; previous locations are indicated with green markers, and shark locations are in red.

To track the sharks marine biologists use a device called a wave glider.
The glider, made in the Silicon Valley is powered by solar panels.
Right now, the glider is centered just north of Santa Cruz at Ano Nuevo State Park.
By mapping a figure eight pattern it's detected all these great whites in red (see video above) within the past 12 months, and for the first time ever, the public can see within seconds where a great white might be swimming.

Scientists from the Monterey Bay Aquarium and Stanford use a seal decoy to lure the sharks in so they can tag them.
So far, more than 200 sharks have been tagged and tracked by the glider and buoys posted at shark hot spots up and down the coast.
"We will be able to manage them in a way that is sustainable so that whether its our kids or grandkids or their grandkids that they will be able to come to the ocean and know," explains Dr. Kochevar. "That there is this abundant and diverse ecosystem right here."

It may not be what you want to see in the ocean, but sharks are an important part of marine life that these scientists want you to understand.
Dr. Kochevar says that the number of great white sharks in the Central Coast is actually smaller than they thought. There are as few as 250 along the California region.
He says they don't know if that number means the population has increased or declined, so now they are gathering data with this new technology to keep a closer look.


Current Track Map
This map shows the tracks from tags that have reported within the past 30 days.

If you're interested in detecting a shark along the central coast you can go to TOPP.org.
Click on "Buoys" to see a list of the most current sharks in that area.