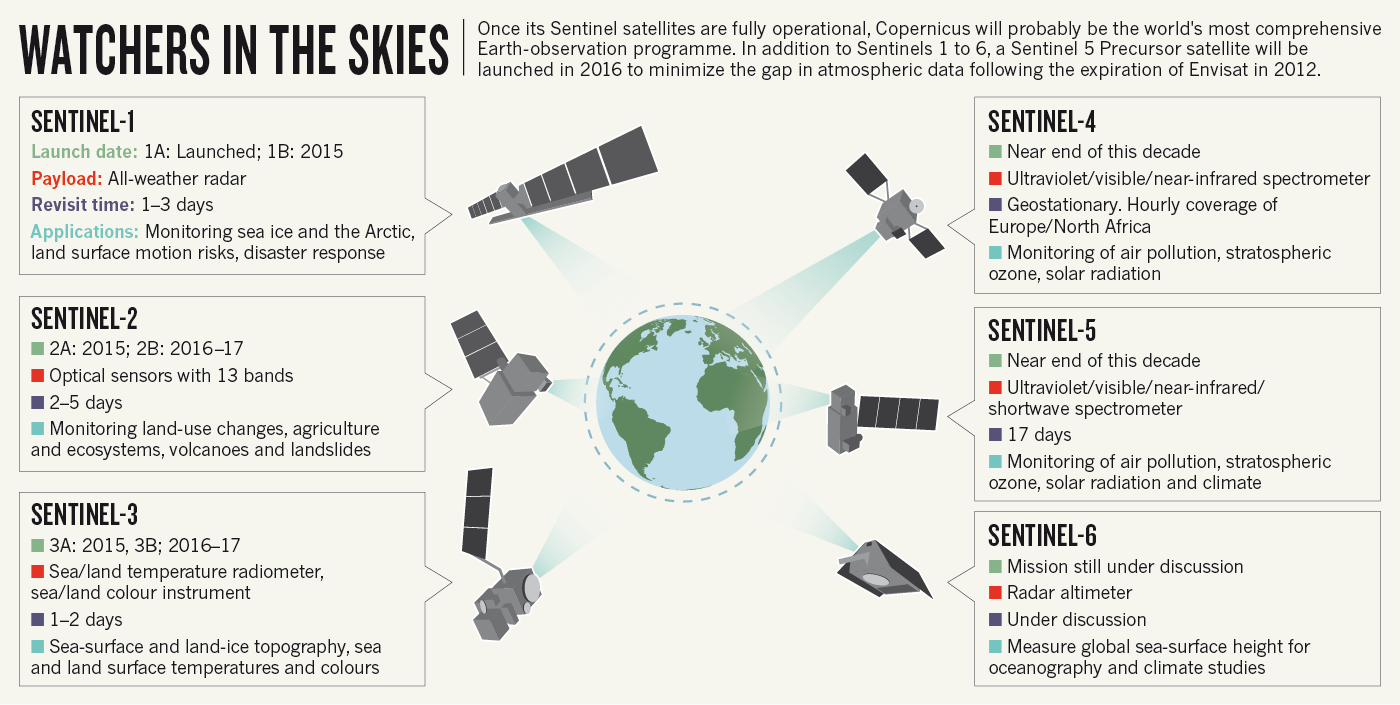 Europe has launched the first satellite of what is heralded as one of the most ambitious Earth-observation programmes ever.
On 3 April, a Soyuz rocket dispatched into orbit the Sentinel-1A probe, the first craft of a planned constellation of six Sentinel families set to be launched by the end of the decade.
Together, the satellites will offer unprecedented long-term monitoring of the planet’s land, water and atmosphere.

The Sentinels will be the core of the €8.4-billion (US$11.5-billion) Copernicus programme, which is managed by the European Commission.
Copernicus will also draw in data from about 30 other satellites, and from ocean buoys, weather stations and air-quality monitoring networks.
“The Sentinels and Copernicus have the potential to become the world’s most comprehensive Earth-monitoring system,” says Zbynek Malenovsky, who studies vegetation using remote sensing at the University of Wollongong in Australia.


This  video was produced by the SWIFT project in 2011, when Copernicus was named GMES (Global Monitoring for Environment and Security) : this is an overview of the Marine Environment Monitoring Service of GMES, the Earth Observation programme of the European Union.
www.copernicus.eu/pages-principales/services/marine-monitoring/

Copernicus was designed by the European Union (EU) and the European Space Agency (ESA) to help the European Commission and EU member states to develop environmental policies and monitor the results.
Its data will be used to create services for myriad practical applications, including ice mapping, agriculture management, climate-change forecasting and disaster response.
The idea is to produce images, maps and models in near real time, much as is done with weather monitoring, but for many more variables.

Unlike most previous Earth-observation missions, the Sentinels will be replaced regularly as they age.
This will help to generate long-term cross-calibrated data sets of a variety of imagery and measurements, says Cathy Clerbaux, an atmospheric scientist at the LATMOS atmosphere and astro­physics research institute in Paris.
“It’s not easy to connect data series such as measurements of pollutants, ozone or greenhouse gases when you have different instruments, and gaps between missions,” she says.

The data will be free for anyone to access and use. (see myOcean interactive catalogue)
But researchers will enjoy formal user status alongside public authorities, and will thus have privileged access, including dedicated help desks and support.
“Scientists are now much more integrated into the user community, and not neglected as they have been in the past, when the focus was more on the operational side,” says Josef Aschbacher, head of ESA’s Copernicus office.
“I expect scientists to be the number-one user group.”


Accurate information about the environmental is crucial.
It helps to understand how our planet and climate are changing, the role human activity play in these changes and how this affects our daily lives.
Responding to these challenges, the EU and ESA have developed an Earth observation programme called Copernicus, formerly known as Global Monitoring for Environment and Security, - a programme that becomes operational with the launch of Sentinel-1A.

Sentinel-1A is the first of two identical satellites; 1B is set to be launched in the next 18 months.
Both contain a radar system that can see in darkness and through clouds, unlike the optical instruments on many satellites.
This will allow them to continuously image cloudy areas such as tropical forests.
They will operate in tandem, cutting down the time between flyovers of the same point on Earth (known as revisit time), and enabling quick-succession imaging to measure, for example, ground deformation from earthquakes.

Sentinels 2 to 5 will have different goals.
Between them, they will use optical sensors, radiometers and spectrometers to measure everything from sea temperatures to air pollution.
In addition, a Sentinel-5 Precursor satellite will be launched in 2016 to minimize the shortfall in atmospheric data-gathering following the 2012 loss of the European Envisat satellite.
A sixth Sentinel, a radar altimeter that will measure sea-surface heights, is also under discussion (see ‘Watchers in the skies’).
These diverse measurements of the major components of Earth systems will make the Sentinels very valuable, says Richard Anthes, emeritus president of the University Corporation for Atmospheric Research in Boulder, Colorado.
“A balanced suite of Earth observations is required for observing and understanding Earth as an interconnected system,” he says.

Sentinel-4, for example, will be one of the first satellites to monitor atmospheric pollutants from a geostationary orbit, notes Clerbaux — and the first to provide hourly measurements over a single area, in this case most of Europe and North Africa.

Sentinel-2, a pair of high-resolution imaging devices, is also causing excitement.
The satellites’ specifications are superior to those of Landsat-8, the flagship US Earth-observation satellite, with a spatial resolution down to 10 metres — three times finer than Landsat-8 — and shorter revisit times of just 2–3 days at mid-latitudes.
This opens up research into areas that update every few days, such as crop changes.

“Sentinel-2 should really change the face of Earth observing,” says Gregory Asner, an Earth scientist at the Carnegie Institution for Science in Stanford, California.
“This is the satellite that could revolutionize land-cover and land-use change monitoring and analysis.”

Scientists from Sentinel-2 and Landsat-8 have been working together to make their data compatible and to develop joint archives.
It is a test of the concept of a virtual satellite constellation, says Mike Wulder, a scientist at the Canadian Forest Service in Victoria and a member of the Landsat science team.
“Satellite data products could be significantly improved if these were not limited to individual sensors but would combine complementary platforms across space agencies and sensor types.”

Compatibility, says Malenovsky, will be a key factor within the Sentinel fleet.
The fleet’s scientific value, he says, will be maximized if data from various crafts can be combined to create virtual, as well as practical, constellations.