Aerial, on-board and underwater video of the sinking of the 2nd largest artificial reef just off the coast of Key West.
This 13-year project to create a new artificial reef in the Florida Keys National Marine Sanctuary finally ended May 27, 2009, with the intentional sinking of the former missile-tracking ship the Gen. Hoyt S. Vandenberg.
The 523-foot-long ship is situated about seven miles south of Key West.
The bottom of the ships hull rests on sand at depths between 140 and 150 feet.
But the ship is so massive that the superstructure extends to about 45 feet below the surface.
Even though the process to acquire, fund, permit, rid the Vandenberg of potential environmental contaminants and tow her to Key West took 13 years, only a minute and fifty four seconds were needed to sink her after a demolition team ignited forty four explosives cutting charges.

The U.S. Maritime Administration has adopted new rules that, for now, effectively end a high-profile program for getting rid of old ships by making them into artificial reefs.

The federal agency once trumpeted its reefing program as an environmentally responsible alternative for disposing of junk behemoths by stripping them down and sinking them offshore, where they often became popular destinations for fishermen and divers.

Several unwanted ships owned by the agency - including two from the James River Reserve Fleet, better known as the "ghost fleet" - were converted into metallic reefs after being prepared and purged of toxic innards at local shipyards.

But the Maritime Administration recently changed two standards that, taken together, removed all remaining junk ships as possible reef candidates.
Curt Michanczyk, director of ship disposal for the agency, a branch of the Department of Transportation, said Wednesday that the program still exists, just that none of the 40 anchored vessels at reserve fleets in Virginia, California and Texas qualify. 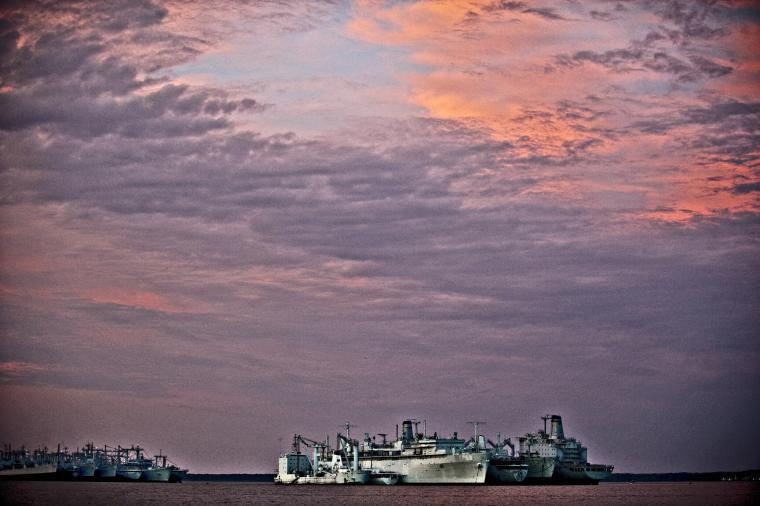 The sun sets over the James River Fleet, otherwise known as the Ghost Fleet,
on Thursday, Oct. 28, 2010. (Amanda Lucier | The Virginian-Pilot)

Only 12 obsolete ships are left at the James River fleet, off Fort Eustis in Newport News, where there used to be more than 100 less than a decade ago.
Most have been towed away to salvage yards and recycled for scrap metal and steel.

Chief among the changes is a rule that all ships built before 1985 no longer can be sunk as reefs.
The rule is targeted at curtailing PCBs, a highly toxic class of chemicals that, before 1985, often were found in ship wiring, insulation, gaskets and paint.

Several environmental groups applauded the changes, saying they will end a program that for too long allowed toxic remnants to pollute the ocean.
"The Obama administration got this one right," said Colby Self, an activist with the Basel Action Network, a Seattle-based group that has lobbied against reefing for years.
"They should be commended for putting in place a more conservative policy that protects our resources, our jobs, as well as the marine environment."

The Navy also runs a reefing program.
In the past two years, it has watched as coastal states sunk a former destroyer, the Arthur Radford, and a former aircraft carrier, the Oriskany, off the Atlantic coast as recreational venues, according to a spokesman.
Lt. Cmdr. Paul Macapagal said Wednesday that there are no changes planned in the program, though no ships are in line to become reefs.

Nor are changes expected in another disposal initiative that is similarly protested by the Basel Action Network - using old ships as target practice for warplanes.
Macapagal said four ships were destroyed under the SINKEX program last year, all in the Pacific.
No actions are planned in 2013, he added.


Divers marked the 10th anniversary of the conversion of a retired Navy ship
into an artificial reef in the Florida Keys National Marine Sanctuary.

Changes by the Maritime Administration also are not expected to alter reefing efforts at the Virginia Marine Resources Commission.
The state agency has created numerous artificial reefs over the years in the ocean and the Chesapeake Bay, made from old ships, outdated commuter train cars and Army surplus vehicles, among other items.
The focus today is not on ships but on concrete, said Mike Meier, who coordinates the program for the state marine commission.
"We're using clean demo concrete, primarily in the Bay," Meier said.
"We've gotten away from using ships."

The Maritime Administration adopted its new rules in late May but did not publicly air them until recently - after the Basel Action Network issued a news release claiming victory in its long-running debate over ship disposal and reefing.
Michanczyk, the agency's ship disposal director, said the new rules were viewed as "business changes, a management change" and were not announced publicly.
Posted by Peio at 1:05 AM