It won't happen again until December 2117.
On June 5th, 2012, Venus transited the face of the sun in an event of both historical and observational importance
The Venus Transit 2012 has come and gone but the Solar Dynamics Observatory has left us with memories that will last a lifetime.

The planet Venus made a slow transit across the face of the sun on Tuesday, the last such passing that will be visible from Earth for 105 years.

Transits of Venus happen in pairs, eight years apart, with more than a century between cycles.
During Tuesday's pass, Venus took the form of a small black dot slowly shifting across the northern hemisphere of the sun.


Launched on Feb. 11, 2010, the Solar Dynamics Observatory, or SDO, is the most advanced spacecraft ever designed to study the sun.
During its five-year mission, it will examine the sun's atmosphere, magnetic field and also provide a better understanding of the role the sun plays in Earth's atmospheric chemistry and climate.  SDO provides images with resolution 8 times better than high-definition television and returns more than a terabyte of data each day.
On June 5 2012, SDO collected images of the rarest predictable solar event--the transit of Venus across the face of the sun.
This event happens in pairs eight years apart that are separated from each other by 105 or 121 years.
The last transit was in 2004 and the next will not happen until 2117.


Armchair astronomers watched the six-hour and 40-minute transit on the Internet, with dozens of websites offering live video from around the world.
Closeup views from the Prescott Observatory in Arizona, fed into Slooh.com's webcast, showed a small solar flaring in the making just beneath Venus' sphere.

This movie shows the transit of Venus on 5-6 June 2012 as seen from SWAP, a Belgian solar imager onboard ESA's PROBA2 microsatellite.
SWAP, watching the Sun in EUV light, observes Venus as a small, black circle, obscuring the EUV light emitted from the solar outer atmosphere - the corona - from 19:45UT onwards.
At 22:16UT - Venus started its transit of the solar disk
The bright dots all over the image ('snow storm') are energetic particles hitting the SWAP detector when PROBA2 crosses the South Atlantic Anomaly, a region where the protection of the Earth magnetic field against space radiation is known to be weaker.
Note also the small flaring activity in the bright active region in the northern solar hemisphere as Venus passes over.
Towards the end, you can see a big dim inverted-U-shape moving away from the Sun towards the bottom-right corner.
This is a coronal mass ejection taking off.

Skywatchers on seven continents, including Antarctica, were able to see all or part of the transit. Even astronauts aboard the International Space Station joined in the spectacle.
"I've been planning this for a while," space station flight engineer Don Pettit said in a NASA interview. "I knew the transit of Venus would occur during my rotation, so I brought a solar filter with me." 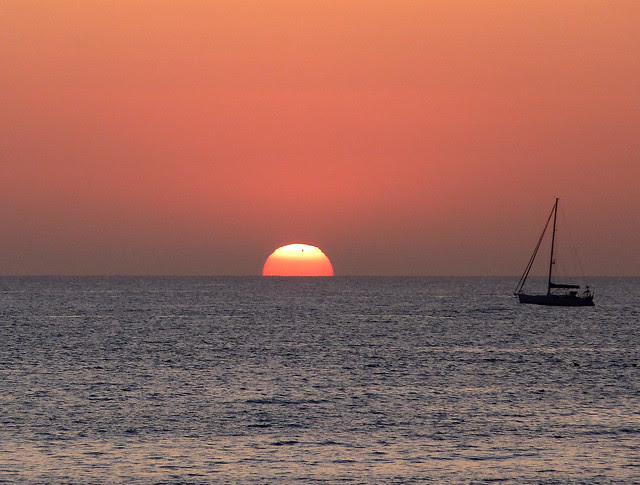 It's not all about pretty pictures.

Several science experiments were planned, including studies that could help in the search for habitable planets beyond Earth.
Telescopes, such as NASA's Kepler space telescope, are being used to find so-called extrasolar planets that pass in front of their parent stars, much like Venus passing by the sun.

During the transit of Venus, astronomers planned to measure the planet's thick atmosphere in the hope of developing techniques to measure atmospheres around other planets.
Studies of the atmosphere of Venus could also shed light on why Earth and Venus, which are almost exactly the same size and orbit approximately the same distance from the sun, are so different.
Venus has a chokingly dense atmosphere, 100 times thicker than Earth's, that is mostly carbon dioxide, a greenhouse gas.
Its surface temperature is a lead-melting 900 degrees Fahrenheit (480 degrees Celsius) and towering clouds of sulfuric acid jet around the planet at 220 miles per hour dousing it with acid rain.

"Venus is known as the goddess of love, but it's not the type of relationship you'd want," an astronomer said on the Slooh.com webcast.
"This is a look-but-don't-touch kind of relationship."

Scientists are interested in learning more about Venus' climate in hopes of understanding changes in Earth's atmosphere.
During previous transits of Venus, scientists were able to figure out the size of the solar system and the distance between the sun and the planets.

Tuesday's transit is only the eighth since the invention of the telescope, and the last until December 10-11, 2117.
It also is the first to take place with a spacecraft at Venus.

Observations from Europe's Venus Express probe will be compared with those made by several ground and space-based telescopes, including NASA's Solar Dynamics Observatory, the joint U.S.-European Solar and Heliospheric Observatory and Japan's Hinode spacecrafthttp://solar-b.nao.ac.jp/index_e.shtml.