The America’s Cup, translated for television

Race Day One of the AC World Series - Cascais
From NYTimes

THE yacht-club crowd may turn out to cheer at regattas, but sailboat racing hasn’t been a big hit with mainstream television audiences — perhaps because they have trouble following what’s happening on the waves.
Experts in the sport may appreciate a helmsman’s split-second tactical decisions or a crew’s athleticism, yet the drama often goes over the heads of landlubbers who don’t know how points are scored, or even who is ahead.

Now technology may change that.
Starting in August, a two-year series of regattas, culminating in the 34th America’s Cup in 2013 at San Francisco, will have a feature intended to demystify the sport for television and Web audiences.

Live footage will be superimposed with ingenious graphics — including lines and pointers that show who is ahead or behind in the welter of foam and hulls, and tags that identify yachts as they race to coveted positions.
Televised yachting has long used computer graphics to represent boats, waves and the leader in a race.
But to show them, broadcasters have had to cut away from the action.
The new system will note with virtual markers the details of hard-to-see moments as they happen — when, for example, a boat strays from course boundaries, or when two yachts jockey for position near a crucial turn.

The technology is part of an ambitious, expensive effort by the America’s Cup Event Authority, the entity formed to handle all commercial aspects of the America’s Cup competition.
The event authority has been backed by the billionaire Lawrence J. Ellison, the chief executive of Oracle and owner of Oracle Racing, the team that won the cup in February 2010.
The cost of the America’s Cup races will include $270 million for the regattas at San Francisco and the final cup events there, said Stephanie Martin, spokeswoman for the event authority.
“We plan to raise the money through sponsorships and through broadcasters,” she said.

The graphics system is still being tested, and TV networks have yet to announce interest in the events.
But the graphics may attract a new generation of viewers, said Claude Ruibal, the head of sports content at YouTube.
“The races are hard to view right now,” Mr. Ruibal said.
“But if you add graphical elements, consumers will have a richer experience. We feel there is a real opportunity here to get a whole group of young consumers excited.” 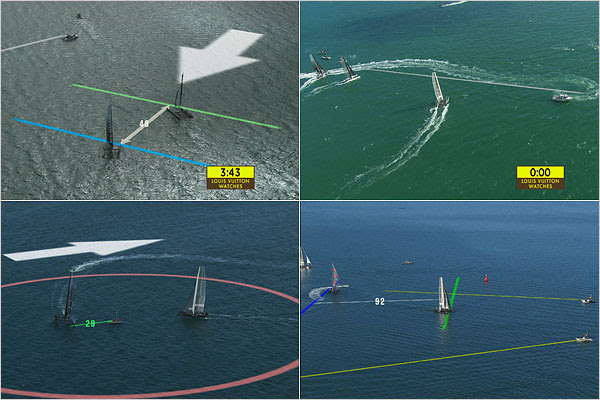 New technology can help television viewers sort out the intricacies of sailboat racing.
Graphics superimposed on aerial shots can show the starting line, top right, or the seconds or distance in meters between boats.
The big arrows show wind direction.
To get the video footage and then insert explanatory arrows, lines or tags, a television helicopter will fly high above the races to provide wide aerial views, said Gary Lovejoy, media director for the event authority.
Software will figure out the camera’s exact position on the helicopter in relation to the yachts, all of which have GPS accuracy to about an inch, and then superimpose the graphics.

The graphics system is the brainchild of Stan Honey, technology director for the 34th America’s Cup.
Mr. Honey, an electrical engineer and an avid sailor, is no stranger to the elucidation of hard-to-see moments in sports.
He is one of the creators of a popular television graphics effect: superimposed lines that serve as virtual first-down yard markers for football fans.
He is a co-founder of Sportvision, a company that provides this service.
Ken Milnes, who once worked with Mr. Honey at Sportvision, is developing graphics for the cup races.
Mr. Milnes also helped create the graphics system that identifies Nascar racers as they surge through the backstretch.
A technical staff of at least 100 will be on hand to produce each regatta, Mr. Lovejoy said.
And each yacht will have at least four onboard cameras, operated by onshore technicians.

Crew members will wear lapel microphones, and special chase boats will provide tracking shots to add to the store of replays and slow-motion footage that will reveal the yachting mysteries of laylines, tacks and marks.
The cameras will keep track of a new class of rapid catamarans with sophisticated sails that achieve stability not from a heavy keel, but rather from their width, which comes from two hulls or bottoms joined by a frame, said John Rousmaniere, who has written books about the America’s Cup
The design makes the catamarans extremely lightweight, but still able to carry a large sail area.
Their potential acceleration is far greater than that of a traditional keel boat, he said.
But new technology alone may not draw large TV crowds in the United States.

In the past, the America’s Cup races pitted one country against another: the skipper and crew had to come from a single country, as well as the yacht club they represented.
That’s changed.
Since 2003, the skipper and crew can be international.
Only the yacht club represents a country.
That dilution in national identity may give pause to viewers who like to cheer for a home team. “They tend to root for Americans,” Mr. Rousmaniere said of TV sports audiences.
“Without a clear national identify, loyalties aren’t obvious and clear.”