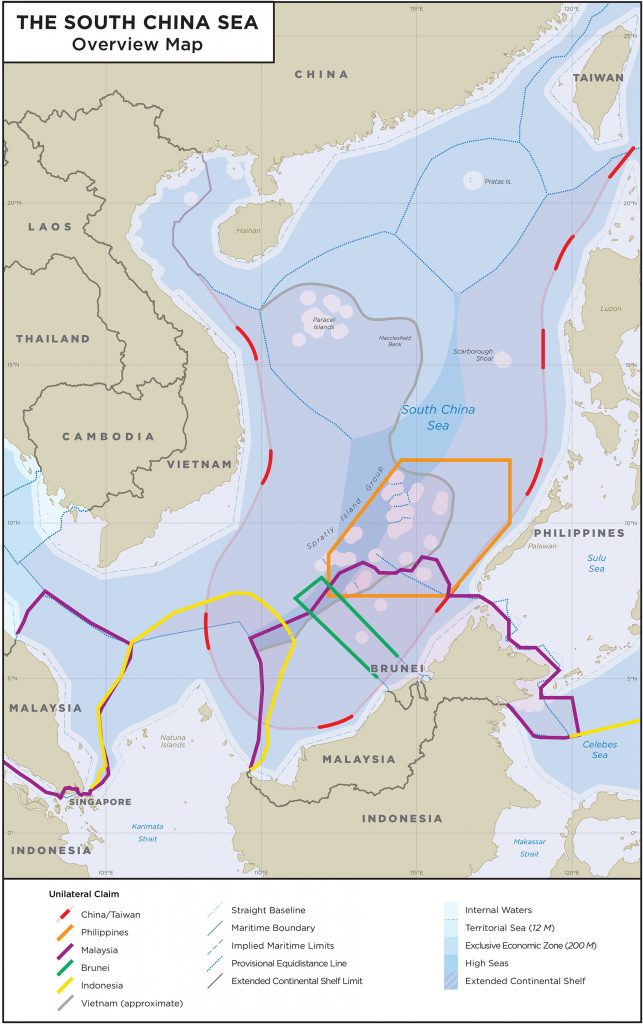 The global economic and geopolitical importance of the South China Sea (SCS) dispute far outpaces that of any other boundary dispute we have discussed to date.
Half of all the fishing vessels in the world are located in the waters of the South China Sea.
There are also large reserves of oil and natural gas and “some of the world’s most important shipping lanes;” these routes carry more than a fifth of all goods (by value) shipped each year.

Seven states border the South China Sea: China, Taiwan, the Philippines, Malaysia, Brunei, Indonesia and Vietnam.
I list Taiwan as a separate state despite its disputed sovereignty because they have a unique claim in the South China Sea and independently occupy some of the disputed features.
Each of the seven littoral countries have individual, overlapping, and disputed claim lines to South China Sea maritime territory.

There are five main groups of disputed islands in the South China Sea which are labeled on the map below.
The largest (and most contested) are the Spratly Islands, which are a collection of hundreds of islets and reefs extending from near the coast of the Philippines and Borneo Island towards Vietnam.
Then come the Paracel Islands which are located to the north between Vietnam and China, and far to their southeast is the completely submerged Macclesfield Bank, and yet further southeast is Scarborough Shoal.
To the north, roughly equidistant from Hong Kong and Taiwan are the Pratas Islands.
Creating Islands
A 2016 Tribunal of the Permanent Court of Arbitration (PCA) ruled on a case concerning maritime entitlements of the disputed features in the South China Sea brought before it by the Philippines against China.
This case set a precedent for how the South China Sea dispute should be examined under international law.
The Tribunal determined that none of the features in the South China Sea could naturally sustain human habitation or economic life on their own and therefore could not generate a 200 nautical mile (M) Exclusive Economic Zone (EEZ) claim.
This decision by the PCA should limit the claims from all high-tide features to a 12 M territorial sea.
China refused to participate in the case and does not accept the ruling.
Furthermore, all of the littoral states, except the Philippines, continue to claim that the features they occupy are in fact entitled to a 200 M EEZ.
The Tribunal did not rule on international maritime boundaries.

While the Tribunal attempted to classify the features they reviewed based on their composition before they were impacted by humans, many features have been drastically altered to now be able to sustain human and economic life.
China, the Philippines, Vietnam, Malaysia, and Taiwan have transformed the features they occupy to include structures such as runways, buildings, deep harbors, military installations, and tourist attractions.
Take for example the transformation of Fiery Cross Reef by China which can be seen below.
From 2014 to 2020, China dredged and built up the reef which was formerly almost entirely submerged.
Besides the runway and deep harbor, the reef now houses defense and administration buildings and energy production facilities. 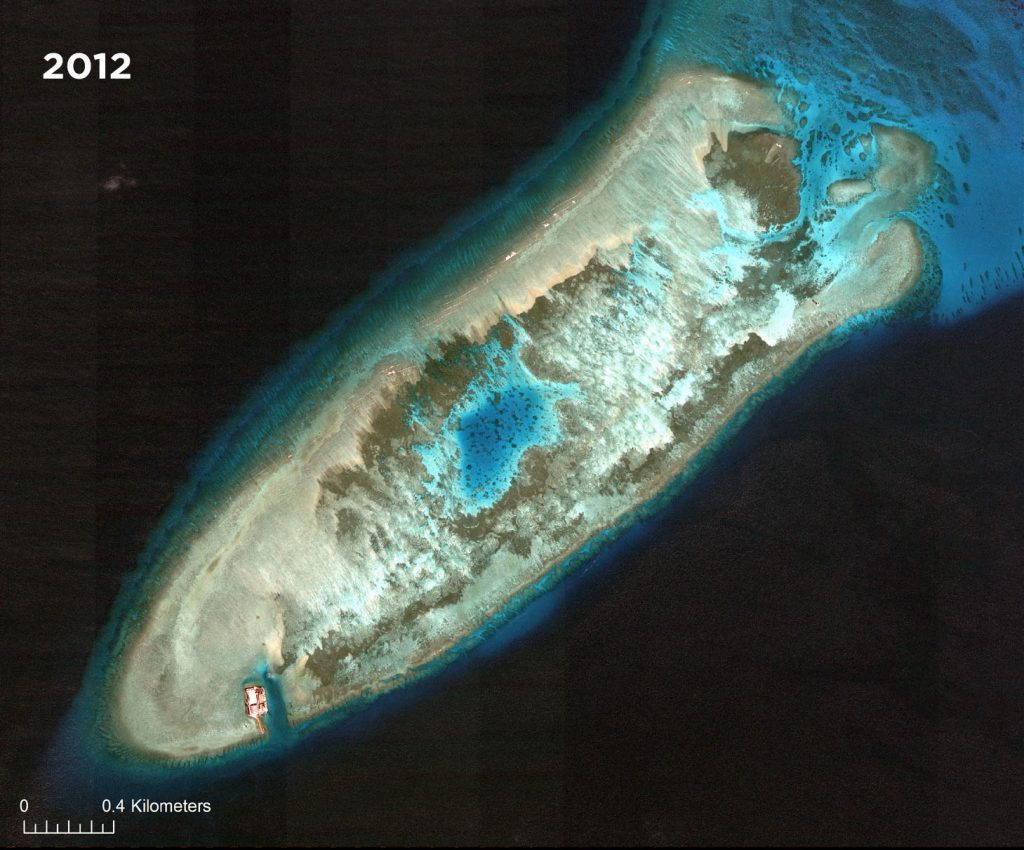 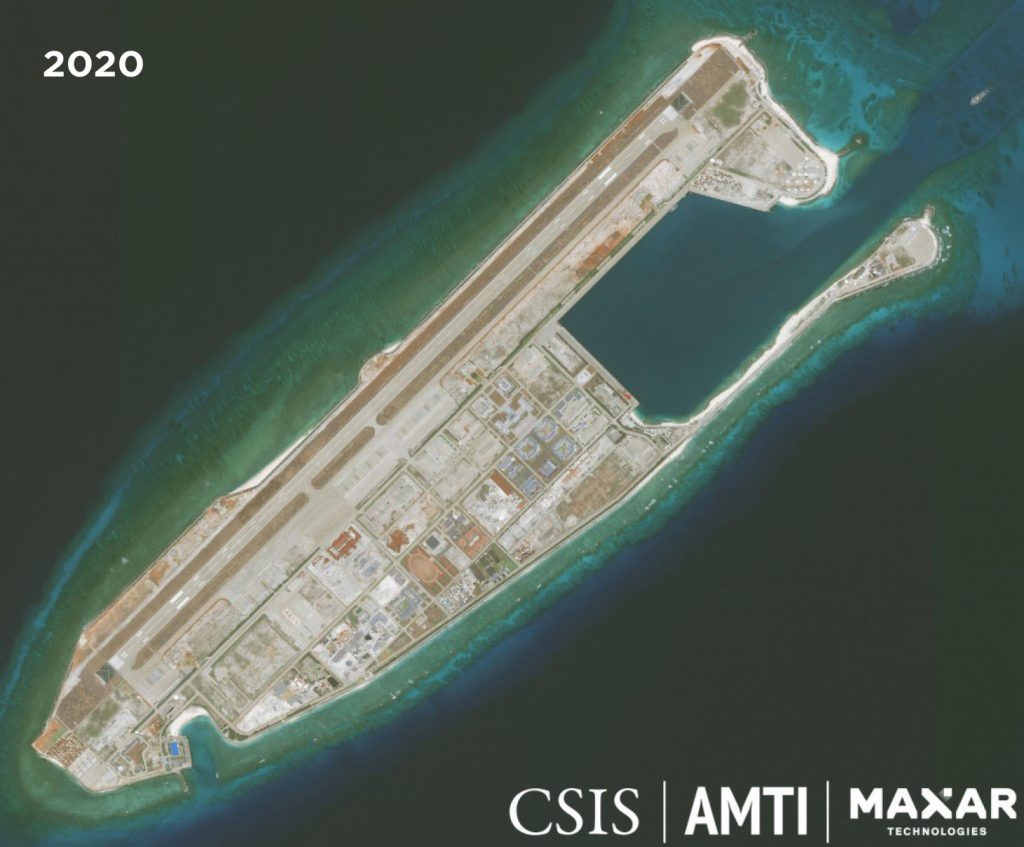 The image on the top is from 2012 QuickBird satellite imagery.
The image on the bottom is from 2020, posted by the Asia Maritime Transparency Initiative, which is a great resource on South China Sea development.
However, not all transformation projects are solely for military uses.
Southwest Cay (Đảo Song Tử Tây) is occupied by Vietnam and though it has military structures the leafy island also has facilities for young children (visible on Google Maps photos).
Malaysia in turn developed Swallow Reef (Pulau Layang-Layang) for the general public as a scuba diving destination fully equipped with an airport and a resort.
A Note on the Environmental Impact

Making the features, especially submerged reefs, habitable usually involves dredging, breaking up coral and covering coral reefs with sand and concrete.
This can completely wipe out any ecosystem that existed on and around the feature and, by changing the seabed, can impact many other marine habitats.
However, there are also environmental impacts caused by this dispute which are quotidian and less visible.

The tactics used by the littoral states to solidify their claims include fishing, hydrocarbon extraction, and militarization.
These three methods all have insidious impacts on the waters of the South China Sea.
Overfishing is a serious problem in the disputed waters of the sea, fish stocks are now only between 5% and 30% of what they were in 1950.
Since most of the fish is consumed locally, continued overfishing will not only have severe economic but also nutritional impacts.

Not only are military bases and vessels huge sources of greenhouse gasses but their runoff can pollute waters as well.
Finally, hydrocarbon extraction can have localized impacts through the destructive process of drilling and, potentially, leaks and spills.
While the impacts of this dispute may reverberate around the globe, we must also remember that it is having a local impact and that the people who live on its shores are the ones who will bear the brunt of the environmental impact.

The Claims of Each State

China claims more of the South China Sea than any other nation.
The “nine-dash line” claim, as it is called, is a set of nine line segments that, when connected, cover 90% of the marine area.
Their claim overlaps with the claims of every other littoral state and includes the entirety of all five feature groups described above.
They occupy the Paracel Islands and many features in the Spratly Islands.

Taiwan, which is claimed by China, has historically claimed all of China, and shares China’s claim to the waters of the South China Sea.
The Taiwanese refer to the claim as the “U-shaped line.” Historically, Taiwan claimed sovereignty of all of the waters within the U-shaped line (as China does).
However, they have recently adjusted the phrasing of their claim to instead be limited to the individual features within the SCS and the territorial waters generated by these features as would be compliant with the United Nations Convention on the Law of the Sea (UNCLOS).
This may have been done with the intention of making their claim more valid in international courts and palatable to the international community.
Taiwan occupies the Pratas Islands and Itu Aba Island in the Spratly Island Group.

Vietnam claims the Paracel Islands, Macclesfield Bank, and much of the Spratly Island Group. 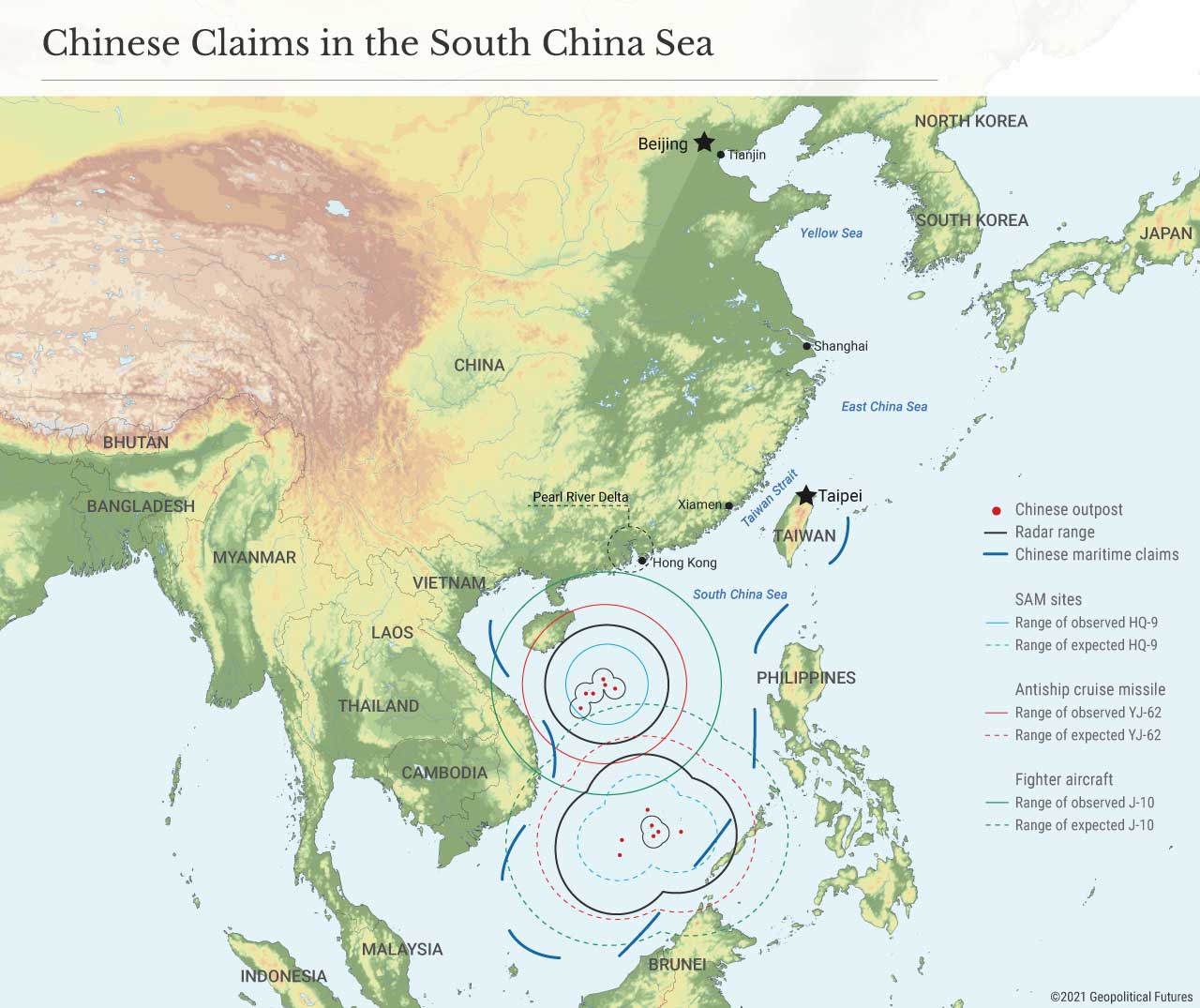 They occupy many features in the Spratly Islands.
Tensions between China and Vietnam over the disputed waters are often high, and China fishes and sends oil exploration teams in waters claimed by Vietnam, occasionally even sending ships very near the Vietnamese coast in a display of force.
While the Vietnamese government has confronted China and even threatened to take them to an international court over the dispute, Vietnam shares close economic ties to China and will likely not escalate the dispute further.

The Philippines occupies nine features in the Spratly Islands, but they claim most of the island group.
They also claim the unoccupied Scarborough Shoal which is within their 200 M EEZ and therefore should fall under their uncontested sovereignty according to the rules of UNCLOS.
To complicate international relations further, they also claim the Malaysian state of Sabah.

Malaysia, in turn, also claims a number of features within the Spratly Island Group some of which they occupy.
One of the reefs they occupy is Swallow Reef (Pulau Layang-Layang), a renowned scuba diving spot.

Brunei is enclaved by Malaysian territory and waters.
The two nations have come to an agreement on their maritime boundaries and have agreed to a partnership on transboundary oil field explorations.
All of the waters claimed by Brunei are also claimed by China and Taiwan.

Indonesia is unique in the fact that it does not claim any of the actual features in the South China Sea, only a section of the sea north of Indonesia’s Natuna Islands.
Part of this area falls within China’s nine-dash line claim, and Chinese law enforcement and fishing vessels have repeatedly entered the disputed area.

This post should only serve as an introduction to the incredibly complicated geopolitical, economic, and environmental picture of the South China Sea.
Additional blogs could be written about the strategies for mapping such a disputed maritime region, how navies (including those of foreign nations) and fishing boats are being used in sovereignty claims, and provide greater details on the environmental catastrophe of island building.
To end on an uplifting note, despite all of the tensions in the South China Sea there is a good deal of cooperation among the littoral states to manage the waters.
Hopefully this cooperation can eventually be extended into a peaceful resolution of this dispute.
Links :
Posted by geogarage at 1:41 AM