Magnets, vacuums and plant-based nets: the new fight to clean plastic from our seas 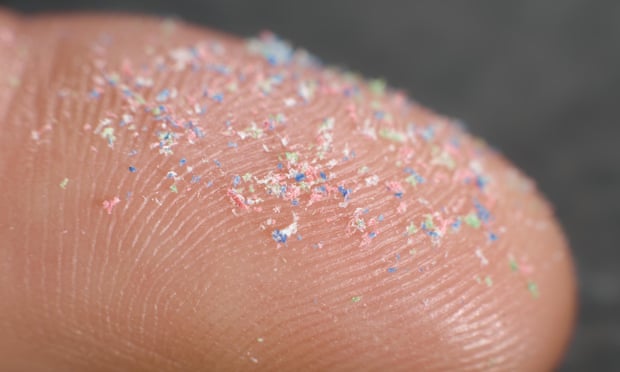 Microplastics have been found in drinking water, the food we eat and the air we breathe.
Photograph: a-ts/Alamy Stock Photo
From The Guardian by Adrienne Matei

Tiny plastics are turning up in the air, our drinking water and our placentas. Here’s how innovators are handling the crisis

When it comes to microplastics, there’s rarely good news.
Researchers continue to find the tiny plastic fragments everywhere they look.

Microplastics have been found in rain, Arctic ice cores, inside the fish we eat, as well as in fruit and vegetables.
New research suggests 136,000 tons of microplastics are ejected from the ocean each year, ending up in the air we breathe.
They are in human placentas, our wastewater, and our drinking water.

All plastic waste, regardless of size, is detrimental to the environment, but microplastics pose a special challenge given their minuscule size (some are 150 times smaller than a human hair) and ability to enter the food chain.
The result is that chemical additives and all end up in the flesh and organs of fishand humans.
While the World Health Organization’s stance is that ingesting microplastics poses no known threat to human health, not everyone agrees.

“I think we know enough today to worry about it,” says Dr Douglas Rader, chief oceans scientist at the Environmental Defense Fund, pointing out that many microplastics contain chemicals linked to reproductive and hormonal disruption and cancer.

But it’s not all bad news.
Some are now innovating in microplastic extraction, providing the basis for a touch of cautious optimism.
Here is a look at several examples.
A microplastics magnet 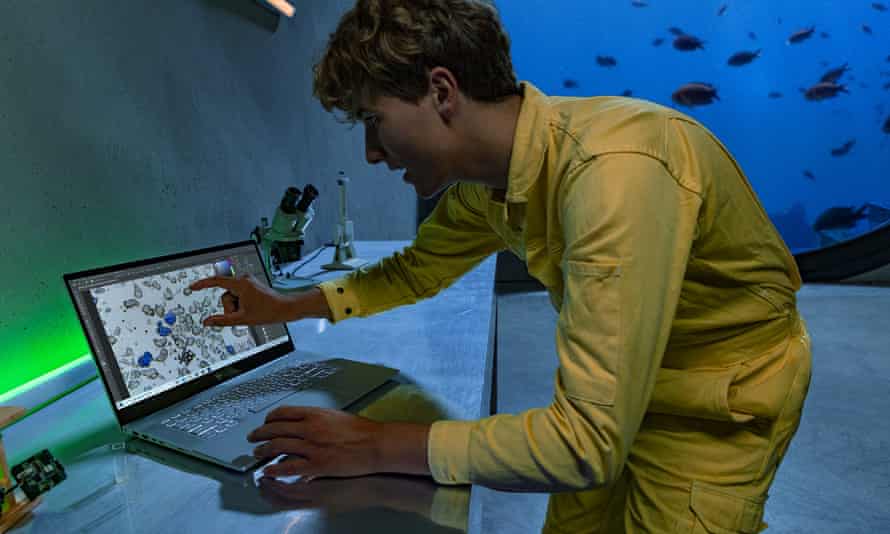 Ferreira created a homemade ferrofluid – a magnetic mixture of oil and powdered rust – and successfully used it to remove 88% of microplastics from water samples.
Ferreira’s efforts won him the top prize at the 2019 Google Science Fair.
He hopes to incorporate his findings into a device compatible with existing filtration systems, such as those in wastewater treatment plants (most of which are unable to sufficiently filter out microplastics).

In the future, he plans to test out whether he could use the device to make a self-cleaning filter for ocean engines.
“It could be built into the already existing water intake and outlets of the ships used to cool the engines, so as they’re taking in the water and as they’re driving around the oceans, they could be cleaning the water that passes through those engines,” he says.
(In autumn 2020, Suzuki Motor Corporation announced plans to introduce a microplastic filter into its watercraft outboard motors using similar logic.)
Using bottom feeders as ‘living vacuum cleaners’ 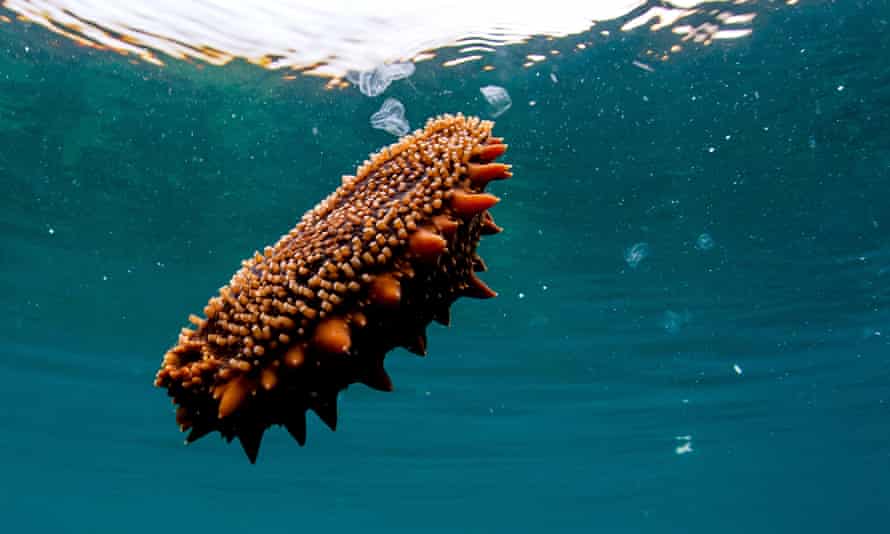 A Japanese spiky sea cucumber in the Sea of Japan. Photograph: Yuri Smityuk/TASS
Dr Juan José Alava, an expert in marine eco-toxicology and conservation, believes the answer to the microplastics problem could already be in the environment.
Alava studies organisms he calls “living vacuum cleaners”, including bottom feeders such as sea cucumbers, as well as the much smaller organisms that make up “epiplastic microbial communities”: strains of bacteria able to break down synthetic material, some of which originally evolved to metabolize naturally occurring polymers such as lignin and wax, and others which evolved to eat plastic garbage specifically.

“The idea is to identify communities of bacteria and try to enhance them – not by incorporating a new mix of genes created by humans, but by stimulating them to break down plastic,” he says.
When an organism can eliminate more plastic than it accumulates in its body or waste, it becomes “our best ally” in the fight against microplastics, says Alava.
A screen that can catch ‘plastic dust’ 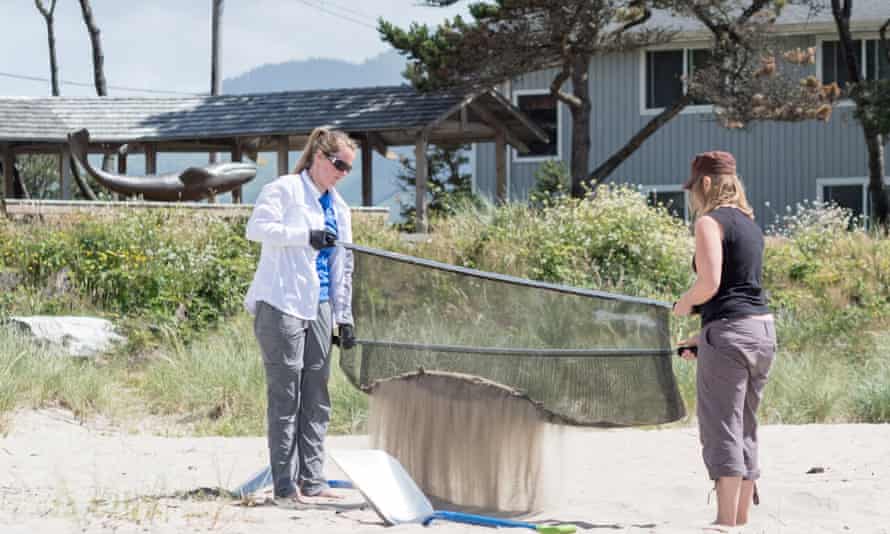 Marc Ward’s static-charged screen can capture plastic particles as small as 50 microns.
Photograph: Marc Ward
Marc Ward first became concerned about microplastics over 15 years ago while studying threats to wild marine turtle populations in Costa Rica.
Not only were turtles swallowing toxic microplastics, but the secluded beaches on which they nested were choked with plastic particulates.

Ward began surveying beaches in both South America and near his home of coastal Oregon, sifting through sand with a static-charged screen able to capture plastic particles as small as 50 microns – essentially plastic dust.
In some areas, he found 10 pounds of microplastic in each square meter of beach.
The last straw for Ward came when, shortly after co-authoring a paper on marine plastic toxicity, he brought his two-year-old to their favorite beach in Oregon only to watch the child immediately try to put a piece of plastic garbage in his mouth.

Now, Ward works with a team to filter thousands of pounds of plastic out of Oregon’s beaches every year as part of his non-profit, Sea Turtles Forever’s Blue Wave initiative.

It may be that filter-cleaning sand at the beach is akin to chipping away at a mountain, and that ocean currents can undo such work in one fell swoop, yet Ward retains a positive outlook.
“I know we are not the solution to ocean plastics,” he admits.
But he is extracting vast amounts of plastic from beaches nonetheless.
Plant-based nets than can collect even the tiniest particles 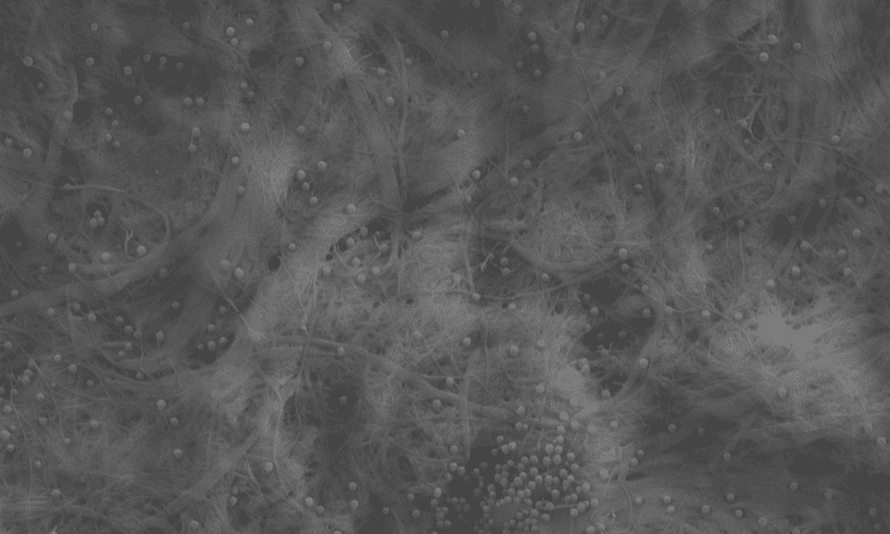 Nanoplastics – as tiny as 0.1 micrometers in diameter – have long proven particularly difficult to remove from drinking and wastewater given their minute size, and they have been found to accumulate in the tissues of humans and other organisms.
Hopefully, they have finally met their match.
The porous, colloidal structure of cellulose allows the material to bind to nanoplastics without using any chemical or mechanical interaction, says Tekla Tammelin, a research professor.
Nanocellulose Film for capturing Microplastics from Fotoni Film & Communications
The gist (which this short video on the technology captures) is that cellulose filters can help researchers study nanoplastics, as well as keep them out of our water when integrated into wastewater filtration systems, or even laundry machines, where they could catch the tiny microfibers from synthetic clothing that comprise a subset of microplastics.
And while these findings are in their early days yet, the nanocellulose product has already garnered industry interest.
Links :
Posted by geogarage at 1:36 AM