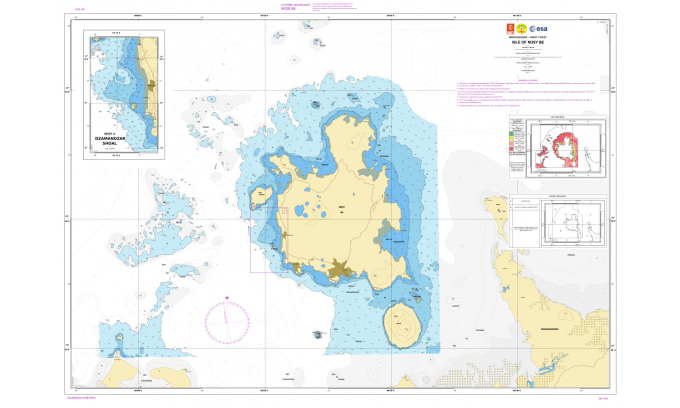 The Nosy Be 2019 ESA Demonstrator charted in accordance with IHO standards.
This chart (click on the picture to magnify), which is using exclusive Copernicus Sentinel-2 modellised depths has been compared to the Nr 5128 original official chart depicted above.
No significant differences were observed but shallow waters are much better described by Copernicus Sentinel-2.
The Nosy Be island is a renowned tourist spot in Madagascar.
see Annex B Argans final report 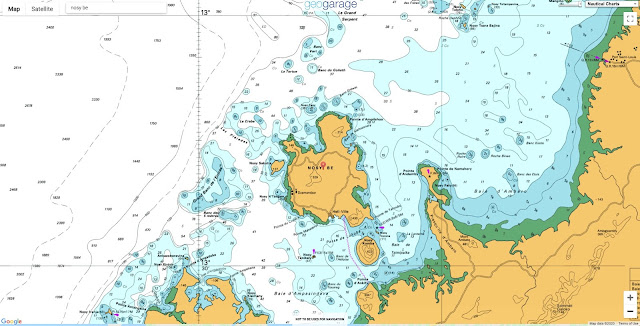 Nosy Be (UKHO map with the GeoGarage platform)

The Hydrographers’ Final Search for an Effective SDB System

It is widely and wrongly assumed that the world’s coastal regions have been surveyed in detail by modern techniques and that the resulting nautical charts are an accurate reflection of the nature of the seabed.
This optimistic approach is not shared by the world’s hydrographic offices or the International Hydrographic Organization (IHO).
Hydrographers have a saying: “the world is fully charted, it’s a shame that so little is surveyed”, and one could add, looking at venerable charts, so poorly surveyed.

Hydrographic offices and the IHO have been looking for years to find an affordable method to fill the coastal gaps in large sections of the world, especially in developing countries that cannot practically rely either on costly ship-based sonar or on more reasonably-priced Lidar surveys.
Great hopes have been placed in the possibilities offered by Satellite Derived Bathymetry (SDB), which has been identified by Robert Ward – the former IHO president – as one of the two most promising survey methods for the future. 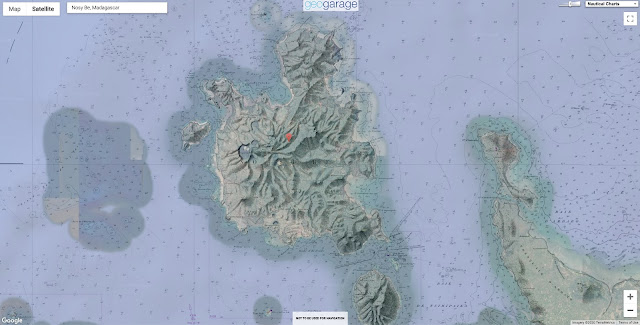 Nosy Be (SHOM old map 5264 with the GeoGarage platform) 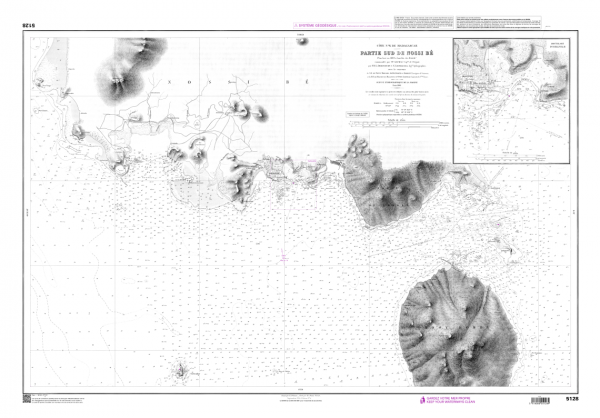 Nosy Be official chart, surveyed in 1899, published in 1902 and still in service.

The European Space Agency (ESA) Sentinel-2 Coastal Charting Worldwide project was conceived to research whether the Sentinel-2 constellation has the capacity to fully reconnoitre the coastal gaps with reliable results, which would be obtained at an affordable price.

Until recently, the exploitation of earth observation in the coastal domain has been limited by the difficulty of obtaining the right satellite image.
For instance, in the early 1990s, it could have taken SDB pioneers several years to select a unique, cloud-free, unglinted SPOT scene, qualified for further processing.
With the advent of high-resolution imagery and a larger choice of commercial Very High Resolution (VHR) satellites, SDB providers were later able to offer 'best available' services.
However, their costly solutions were prohibitive for many nations where such a service would deliver the greatest benefit, and so the ARGANS SDB team of hydrographers and EO scientists were determined to test other options.

VHR satellites yielding 0.5-metre resolution pixels with their associated costs might be desirable to depict parking lots and cadastral delineations, but they are not really adapted to marine coastal environments characterized by low signal-to-noise ratios (S/N) in remote sensing because of light attenuation in the water (the smaller the resolution, the smaller the S/N), and by broader natural structures, the smallest of which (e.g. coral pinnacles) are never smaller than 100 sq. metres.
Thanks to this ESA project, ARGANS has focused on the latest available Copernicus constellation and has systematically compared Sentinel-2 Multi Spectral Imager (MSI) sensor performances against VHR imagery.
Both systems have been found to deliver discrete but complementary results in some circumstances, but the Sentinel mission frequent revisit time has enabled unique insights to be achieved at a minimum cost.

The amazing conclusion of the ESA project is that what might have been considered as a cheap 'good enough' solution has in many cases proven to be much better than the best available solution, due to the significant improvements brought by the Sentinel-2 constellation's five-day revisit time, coupled with its exceptionally calibrated 13-band MSI with excellent signal-to-noise ratios delivered by the sensors.
Analysts are now provided with a large database of usable imagery over the coastal belt which has been demonstrated to deliver excellent results as exemplified by the cross section below.
There is a constant trade-off between precision and accuracy delivered by the Sentinel mission at the expense of resolution, but the stacking of images has demonstrated that this trade-off very much favours the Sentinel approach. 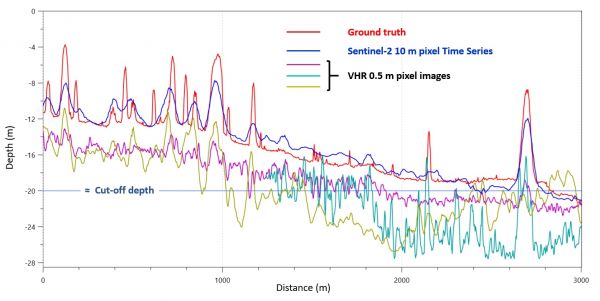 Is SDB Proper Science or Rather the Art of Parameterization by Experienced Marine Cartographers?

It should be stated at this stage that SDB is not a pure science, but the analyst's art of interpreting a most likely and probable reality made by a system that admits an almost unlimited number of unknowns for three equations (atmospheric corrections, water column optical properties and seabed reflectance) provided by the satellite instruments’ blue, green and red spectral bands.

To make sense and choose the parameters most likely to provide a reliable solution, the ARGANS SDB team comprises a unique mix of mathematicians, expert marine remote sensing scientists, IHO-qualified charge hydrographers and maritime cartographers with a strong pedigree in the marine domain.
This multidisciplinary approach ensures that an appropriate interpretive environment supports the scientific analysis and prioritizes safety of navigation as recommended by the SOLAS Convention.

This ESA test study focused on four coastal regions with differing conditions delivering four demonstrator products.
Puerto Morelos, Mexico was selected to compare an existing chart produced by commercial VHR imagery.
Nosy Be, Madagascar was selected as an area covered with an antiquated survey to test and fully exploit the Sentinel-2 data archive and apply ARGANS' latest algorithms: the Statistical and Depth of Penetration (DOP) methods, only made possible by Copernicus. 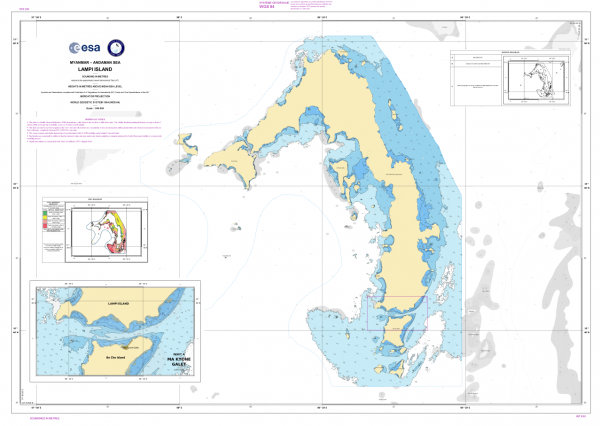 The Lampi Island demonstrator charted in accordance with IHO standards 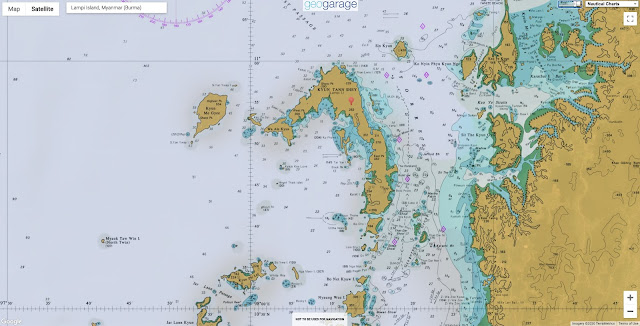 Lampi Island, Myanmar was chosen to show the effectiveness of SDB in turbid waters (an uncharted site previously used to test ESA’s Sen2Coral project) and finally, Coral Harbour, Canada was chosen to explore how SDB with Sentinel-2 would perform in the Arctic waters of the Hudson Bay and the Northwest Passage.
The team employed two physics-based processors both using the same Radiative Transfer Equations (RTE) which, when identically parameterized, yielded the same results for similar performances with an ordinary laptop: 15 minutes per model as opposed to 8 to 10 hours for a noisy 50cm-pixel VHR image.

The statistical method consists of calculating weighted averages over each specific site to produce one bathymetry data set from a large stack of normalized images (53 in the Nosy Be test site).

Because of the existence of several possible solutions to the RTEs and the non-Gaussian distribution of modelized depths, validation criteria have to be applied, backed by mathematical developments and calculations of probabilities to provide occurrence percentages.

The statistical method allows ARGANS to take advantage of Sentinel-2’s data catalogue and remove errors from sediment plumes, clouds and other anomalies to yield what the satellite community is starting to call the ‘perfect image’. 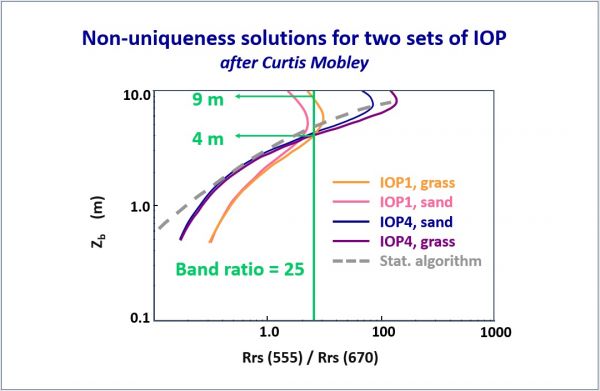 To complement the statistical methodology, ARGANS has also developed the DOP algorithm as a validation tool to determine the theoretical maximum detection threshold, based purely on the colour of the ocean.
As a very simple validation check, any modelled depth deeper than the local DOP should be flagged, double-checked and most likely suppressed.
DOP calculations measure the water transparency down to the Secchi extinction depth.
This optical DOP threshold developed for satellites can be applied to active optical systems such as Lidar and, as suggested by the IHO, could be extended globally to the C-55 Status of Hydrographic Surveying and Nautical Charting Worldwide to determine whether optical systems can be utilized.

About the Copernicus Sentinel A & B Constellation

The work featured in this story was funded by a grant from ESA, with Dr Olivier Arino as the ESA technical officer.
It was undertaken by the SDB team within ARGANS Ltd and led, among other senior specialists, by the earth observation scientist Joe Avis.