The ocean could contribute much more to renewable energy creation, says a new report.
Scientists argue that ocean solutions should be incorporated into Green New Deal policies.
The World Economic Forum’s Virtual Ocean Dialogues is debating how the world’s oceans should be managed and protected.

Monday, June 8, is World Oceans Day, a global celebration honouring our oceans.
The best way we can honour our oceans is to help save them, and understand some of their biggest threats, which are climate change, plastic pollution and overfishing.

Don’t overlook the power of the oceans to help combat climate change.
That is the message of a group of scientists who believe that the world’s oceans are too often viewed as victims of climate change – for example, rising sea levels or damaged coral reefs – rather than recognized as part of the solution.

Policymakers around the world are developing strategies to offset climate change, with particular emphasis on renewable energy, food security, sustainable transport and restoring natural habitats like forests.
Such policies have been grouped together in the United States and elsewhere and referred to as the Green New Deal.

Now, a group of leading US scientists is calling for oceans to play a much greater role in the development of such policies, suggesting that some blue should be mixed in with the green, to make a "Teal Deal". 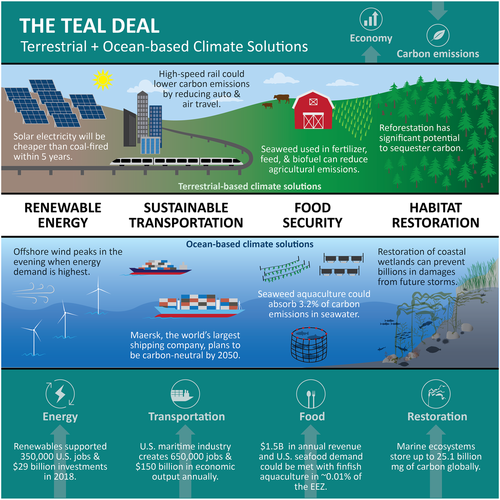 Here are four ways the scientists believe the ocean’s potential should be included in policies to tackle climate change, according to research they published in the journal Conservation Letters.

1. A focus on renewable energy

The ocean’s winds, waves and currents represent a massive source of clean energy that can reduce greenhouse gas emissions, while meeting electricity demand.

Offshore winds blow harder and more consistently than those on land, helping provide an uninterrupted supply of renewable energy. It is also windiest in the afternoon and evening, when available renewable energy from solar declines, but daily electricity demand is at its highest.

On top of this, new technology to harness the energy of waves and currents has great potential to contribute to the generation of renewable energy.

Much of the world’s global trade is transported at sea.
And while greenhouse gas emissions from this are relatively high, there are many solutions to help make sea travel more sustainable.
The report says that emissions could be reduced by more than 75% by using a combination of currently available technologies, including changing hull designs, switching to liquified natural gas, biofuels and wind power, or optimizing ship speed and capacity.

Marine fisheries remain one of the most sustainable sources of protein for human consumption and have a lower overall carbon footprint than many land-based food sources.
And there is further potential in aquaculture – the process of specifically growing or rearing fish or plants like seaweed in the oceans.

Restoring coastal habitats such as mangroves, tidal wetlands and kelp forests will help capture and store carbon dioxide, preventing it from entering the atmosphere.
In addition, coastal habitat restoration will help protect against floods or erosion, offsetting the impact of more extreme weather.

The report comes as leading experts meet to discuss the future of the oceans as part of the World Economic Forum’s Oceans Dialogue virtual meeting.