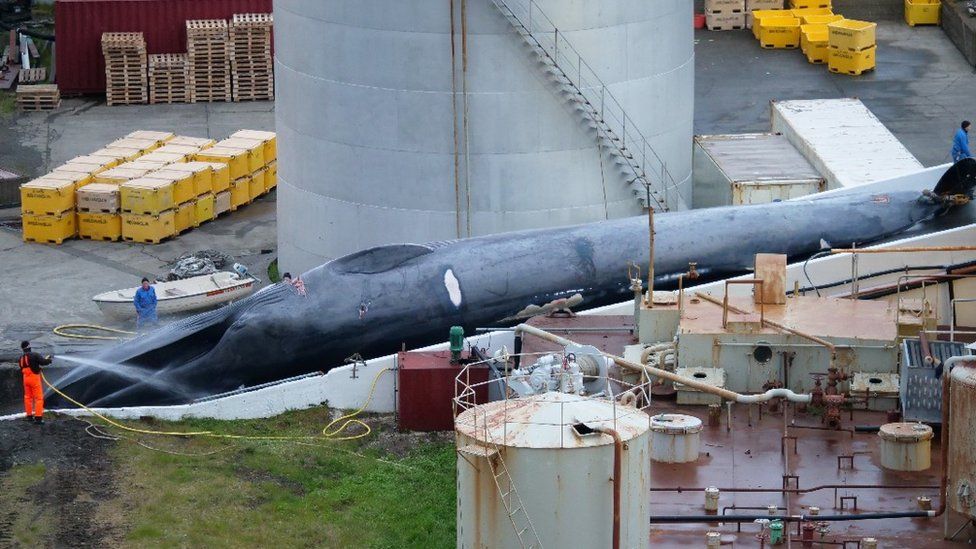 Big as a bus: A massive whale, believed to be a blue whale, that was slaughtered in Iceland.
photos Hard to Port

They might as well have shot a giant panda.
This week an Icelandic whaling company, Hvalur hf, caused uproar when it was revealed that it had killed a blue whale.
Hvalur has killed hundreds of fin whales – mostly destined as meat for export to Japan.
It resumed its hunt in June, after a three-year hiatus.
But no blue whale – a highly endangered cetacean – has been deliberately killed for 40 years.
“We have never caught a blue whale in our waters since they were protected,” Kristján Loftsson, the managing director of Hvalur told CNN.
“We see them in the ocean. When you approach a blue whale, it’s so distinct that you leave it alone."

Hvalur claims that the whale was a blue-fin whale hybrid.
But experts agree the slumped leviathan on the Icelandic killing slope shows all the features of the largest animal that has ever existed on Earth.
The mottled blue skin, the black baleen, the relatively tiny, hooked dorsal fin – all point to a pure blue whale (as if its purity actually mattered).
Having seen many blue whales at close quarters, I can attest to this identification.
As Peter Wilson, a whale expert and tour guide to Iceland, notes in his blog: “Whether they thought it was a blue or had someone out there who doesn’t know the difference, it shows complete disregard for any idea of expertise and a scientifically supported sense of sustainability”. 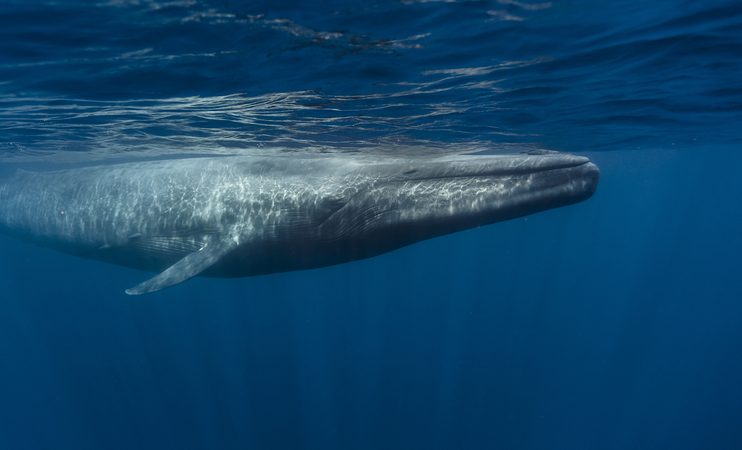 Surely the killing of such an animal should raise a furore as great as the one that met the shooting of Cecil the lion by a Minnesota dentist in 2015?
Yet the (potentially very painful) death of this blue whale follows a under-reported story in May that Japan had killed 122 pregnant minke whales in its 2018 whaling season (sorry, “field survey”).
It all starts to look like a sadly familiar game.
Who can offend the most?
Can they get away with it?

The heart of this issue lies in appropriation.
Who owns a whale?
When a sperm whale died off the coast of the Netherlands two weeks ago, it was towed back to land and lifted on to a quayside, where a necropsy was performed to determine cause of death (pneumonia) and ascertain how to deal with live strandings – a vital question on the shores of the shallow North Sea, where there has been a spate of such incidents in recent years.
Unlike Hvalur, the organisations involved were behaving absolutely honourably.
But as usual, the public was told to keep away, for reasons of “health and safety”.
Sometimes science can get in the way of the very thing it tries to understand.
By removing a whale from public sight – as if it is somehow shameful – don’t we increase the same sense of disconnection that can allow an Icelandic whaler to kill a blue whale, or Japanese whalers to slay hundreds of minkes?


“Charismatic megafauna” – whales, elephants, rhinos, lions, polar bears – have become the ammunition at the front line of ecopolitics.
They’re media-friendly memes in the polarised debate over the animate “resources” of our planet.
Both sides use animals to further their aims.
The animals lose out, twice over.
Their right to selfdom is denied, and the distance between us – what the art critic John Berger called “the narrow abyss of miscomprehension” – increases.

This spring, Cape Cod’s Center for Coastal Studies announced that the North Atlantic right whale, of which fewer than 430 remain, faces extinction by 2050.
In the past 12 months, 18 individuals have been killed by ship strikes or by being caught in fishing gear.
Not a single new calf has been observed this year.
These whales haven’t been hunted by Icelandic or Japanese whalers.
They die within sight of US shores, in the purview of the richest, most powerful democracy on Earth.
Ordinary people are left feeling powerless.
It is the monolithic leviathan of state that Hobbes critiqued, versus the exquisite yet fragile leviathan of the sea.

Ever since it began, the environmental movement has used the weighty issue of whaling as a Manichean struggle of good and evil.
But given the urgency of this situation, we need new ways to think about ourselves and animals – as a continuum, not a demarcation.
There is no “them” and “us”.
The radical contemporary philosopher Tim Morton has defined a “dark ecology”, as an expression of “irony, ugliness, and horror”.

Are we doomed to re-enact these narratives, playing hopelessly with archetypes while animals die, over and over again?
Or can we find a better story than the pathetic one told by that deflated, beautiful animal, hauled out of the infinite sea and into our sea of ignorance?