Gliders on the storm 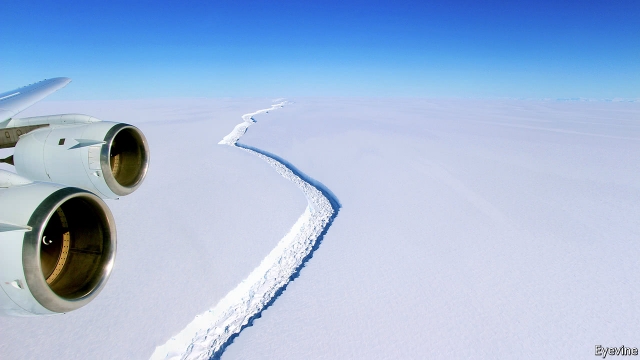 From sharks to ice shelves, monsoons to volcanoes, the scope of ocean monitoring is widening

In November 2016 a large crack appeared in the Larsen C ice shelf off Antarctica (pictured).
By July 2017 a chunk a quarter of the size of Wales, weighing one trillion tonnes, broke off from the main body of the shelf and started drifting away into the Southern Ocean.
The shelf is already floating, so even such a large iceberg detaching itself did not affect sea levels.
But Larsen C buttresses a much larger mass of ice that sits upon the Antarctic continent.
If it breaks up completely, as its two smaller siblings (Larsens A and B) have done over the past 20 years, that ice on shore could flow much more easily into the ocean.
If it did so—and scientists believe it would—that ice alone could account for 10cm of sea-level rise, more than half of the total rise seen in the 20th century.

The dynamics of the process, known as calving, that causes a shelf to break up are obscure.
That, however, may soon change.
Ocean Infinity, a marine-survey firm based in Texas, is due to send two autonomous drones under the Larsen C shelf in 2019, the first subglacial survey of its kind.
“It is probably the least accessible and least explored area on the globe,” says Julian Dowdeswell, a glaciologist at the University of Cambridge who will lead the scientific side of the project.

The drones set to explore Larsen C look like 6-metre orange cigars and are made by Kongsberg—the same Norwegian firm that runs the new open-ocean fish farms.
Called Hugin, after one of the ravens who flew around the world gathering information for Odin, a Norse god, the drones are designed to cruise precisely planned routes to investigate specific objects people already know about, such as oil pipelines, or to find things that they care about, such as missing planes.
With lithium-ion-battery systems about as big as those found in a Tesla saloon the drones can travel at four knots for 60 hours on a charge, which gives them a range of about 400km.
Their sensors will measure how the temperature of the water varies.
Their sonar—which in this case, unusually, looks upwards—will measure the roughness of the bottom of the ice.
Both variables are crucial in assessing how fast the ice shelf is breaking up, says Dr Dowdeswell.

The ability to see bits of the ocean, and things which it contains, that were previously invisible does not just matter to miners and submariners.
It matters to scientists, environmentalists and fisheries managers.
It helps them understand the changing Earth, predict the weather—including its dangerous extremes—and maintain fish stocks and protect other wildlife.
Drones of all shapes and sizes are hoping to provide far more such information than has ever been available before.

Saildrone, a Californian marine-robotics startup, is looking at the problem of managing fish stocks.
Its tools are robot sailing boats covered with sensors which it builds at something more like a factory than a shipyard on the island of Alameda in San Francisco Bay.
These 7-metre, half-tonne vessels—it has so far built 20 of them, one of which is shown on the cover of this quarterly—are designed to ply the seas autonomously, using carbon-fibre wings as their sails.
The wing has a fin attached to it which keeps it trim to the wind at all times.
Its on-board computer (which has a GPS-equipped autopilot), its sensors and its radio get their modest 30 watts of power from lithium-ion batteries topped up by energy from solar panels whenever the sun is out.

One of the first hubs deploying these drones is at Dutch Harbor on Amaknak Island in Alaska; at any given time three of the boats based there are off monitoring a large pollock fishery in the Bering Sea, something they can do autonomously for up to a year before returning for maintenance.
They gather data using echo-sounders designed by Simrad, a subsidiary of Kongsberg.
Because each species of fish reflects different frequencies of sound in its own way (often because their swim bladders resonate differently) a sonar which emits a wide range of frequencies, as the wideband Simrad devices do, can tell what is a pollock and what is not.

The drones supplement the fisheries’ main survey ship, which counts the pollock at the beginning of every season in order to determine how many fish can be caught.
Their data give it a better sense of where to look.
Sebastien de Halleux, Saildrone’s chief operating officer, says they also find more pollock, providing a count 25% higher than that of the official survey vessel.
This may be because the drones cause less disturbance and drive fewer fish away.
In time he thinks the drones might go beyond helping the existing system and do the job on their own, which would be a lot cheaper.

Pollock are good to eat, and if fisheries are managed sustainably they will remain so in perpetuity.
But they are hardly the most exciting fish to monitor.
That honour must surely go to the great white shark.
Jayson Semmens, a marine biologist at the University of Tasmania in Australia, is using a new generation of sensor tags to study the behaviour of these fearsome fish in more detail than was possible before—not to protect people, as shark attacks are very rare, but to build a scientific understanding of their metabolism.
He uses accelerometer data from a tag the size of a grain of rice, attached to the shark’s fin with a clamp, to calculate the energy it expends when it breaches out of the water.

The tags are too small to have enough power to send their data straight back to base.
But they do not need to be retrieved directly from the shark (which is probably just as well).
Their attachments dissolve over the course of their life, so in time they float free, rising to the surface and emitting a simple signal that allows them to be found.
Armed with the data they record, Dr Semmens can calculate the fish’s total energy needs, and thus how much prey a single shark requires.
That can be used to gain an understanding of the flow of energy through the food chain, which is basic to understanding the dynamics of the ecosystem.
The flow of energy through terrestrial ecosystems is comparatively easy to study; marine ones are more mysterious.

A tiny sensor that measures a shark’s metabolism seems remarkable—but at heart it is no more so than a modern phone.
“The accelerometer I use to measure great white shark activity,” says Dr Semmens, “is the same one you use to turn your smartphone into a lightsabre.”
Such tiny tags, which can also measure the temperature and pressure of the surrounding water, are a big step up from the bulky tags of yesteryear, which would provide a single acoustic frequency that allowed researchers to follow the fish if they were close enough.
And they are improving rapidly.
“People are talking about tags which sample blood from animals underwater,” says Dr Semmens.

The same technology can be used for environmental monitoring as well as pure science.
Dr Semmens has tagged several endangered Maugean skate in Tasmania’s Macquarie harbour with somewhat larger sensors—they weigh 60 grams, instead of 10—that measure heart rate and the dissolved oxygen content of the water.
Parts of the harbour are becoming anoxic—deprived of oxygen—because of large-scale near-shore salmon farming.
The data from the skate show how much of this is going on, and how much harm it is doing.
That makes it easier to argue for changes that boost conservation efforts.

One of the biggest benefits of better measured seas is the possibility of getting to grips with dramatic weather events.
The top 3 metres of the oceans hold more heat energy than the entire atmosphere.
How much of that energy escapes into the air, and when and where it does so, drives the strength and frequency of storm systems.
And there is ever more energy to do that driving.
The average surface temperature of the seas has risen by about 0.9°C (1.6°F) in the past hundred years, according to America’s National Oceanic and Atmospheric Administration.
This means that, since the 1980s, about a billion times the heat energy of the atom bombs dropped on Hiroshima and Nagasaki has been added to the ocean—roughly an atomic explosion every few seconds.

Yet even as the amount of energy the oceans hold has risen, the details of its transfer to the atmosphere remain unknown for large swathes of the ocean.
This is particularly important when it comes to understanding something like the South Asian monsoon.
The rains are driven by the huge size of the Bay of Bengal and the amount of fresh water that pours into it from the Ganges and Brahmaputra river systems.
Because this buoyant fresh water cannot easily mix with the denser salty water below it, the surface gets very warm indeed, driving prodigious amounts of evaporation.
Better understanding these processes would improve monsoon forecasts—and could help predict cyclones, too.

That’s why it’s hotter under the water

To this end Amala Mahadevan of Woods Hole Oceanographic Institute (WHOI) in Massachusetts, has been working with the Indian weather agencies to install a string of sensors hanging down off a buoy in the northern end of the Bay of Bengal.

A large bank of similar buoys called the Pioneer Array has been showing oceanographers things they have not seen before in the two years it has been operating off the coast of New England.
The array is part of the Ocean Observatories Initiative (OOI) funded by America’s National Science Foundation.
It is providing a three-dimensional picture of changes to the Gulf Stream, which is pushing as much as 100km closer to the shore than it used to.
“Fishermen are catching Gulf Stream fish 100km in from the continental shelf,” says Glen Gawarkiewicz of WHOI.
These data make local weather forecasting better.

Three other lines of buoys and floats have recently been installed across the Atlantic in order to understand the transfer of deep water from the North Atlantic southwards, a flow which is fundamental to the dynamics of all the world’s oceans, and which may falter in a warmer climate.

Another part of the OOI is the Cabled Array off the coast of Oregon.
Its sensors, which span one of the smallest of the world’s tectonic plates, the Juan de Fuca plate, are connected by 900km of fibre-optic cable and powered by electricity cables that run out from the shore.
The array is designed to gather data which will help understand the connections between the plate’s volcanic activity and the biological and oceanographic processes above it.

A set of sensors off Japan takes a much more practical interest in plate tectonics.
The Dense Oceanfloor Network System for Earthquakes and Tsunamis (DONET) consists of over 50 sea-floor observing stations, each housing pressure sensors which show whether the sea floor is rising or falling, as well as seismometers which measure the direct movement caused by an earthquake.
When the plates shift and the sea floor trembles, they can send signals racing back to shore at the speed of light in glass, beating the slower progress of the seismic waves through the Earth’s crust, to give people a few valuable extra seconds of warning.
Better measuring of climate can save lives over decades; prompt measurement of earthquakes can save them in an instant.