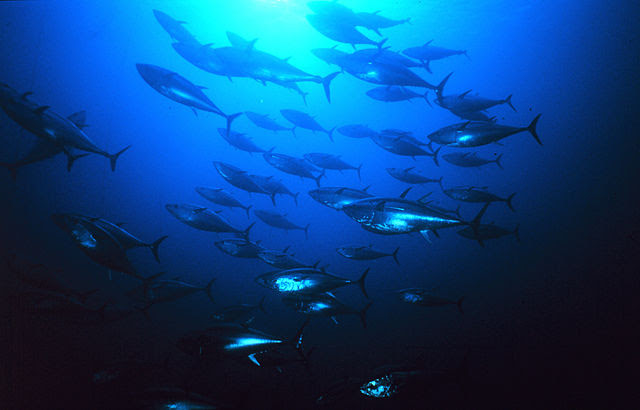 Radioactive cesium from Japan's Fukushima nuclear disaster shows up in bluefin tuna off the California coast, offering researchers a way to follow the fish's migratory history

Bluefin tuna were struggling before Japan’s Fukushima Daiichi nuclear power plant flooded their spawning grounds with radiation.
The fish’s popularity on the sushi platter has plunged population numbers.
Now traces of radiation from the nuclear disaster are showing up in the muscles of bluefins off the California coast.

Across the vast Pacific, the mighty bluefin tuna carried radioactive contamination that leaked from Japan's crippled nuclear plant to the shores of the United States 6,000 miles away.

This radiation, however, might be a good thing.
The levels are low enough that they won’t harm fish or restaurant-goers.
In fact, the traces of radioactive isotopes are helping scientists track the torpedo-shaped fish, and could aid conservation efforts.

Bluefin tuna are not classified as endangered but their numbers have been hard to measure.
The Pacific bluefin tuna's population may be down by 96.4 percent from preindustrial fishing levels, according to the most recent stock assessment, reported in December 2012 (pdf).
Researchers know the tuna are in trouble, but they still need to figure out where the tuna spend most of their time and what triggers their transoceanic migrations.

Stanford University graduate student Dan Madigan is one of the scientists trying to track bluefin.
Researchers do not know exactly what proportion of the bluefin population is cruising either side of the Pacific at any given time.

Pacific bluefin tuna spawn in waters surrounding Japan.
Scientists think that the tuna spend the first year of their lives foraging there before either staying in the western Pacific or migrating to California's coast.
Once they migrate to California, they may stay for several years to fatten up, he says.
The western shores of several continents often have strong prevailing westerly winds that push surface waters away, allowing cold, nutrient-rich waters to flow up from the deep canyons that snake close to shore.
This coastal upwelling system makes the California coast an ideal feeding ground for many marine species, including bluefin.

Understanding why the tuna choose to migrate, at what size, and whether they return to the western Pacific could help researchers model the population and inform fishing strategies.
"It's all about figuring out how each side contributes to the other side and hopefully implementing that into a management model," Madigan says.

As the Fukushima disaster unfolded, Madigan wondered if radiation would show up in the tuna he studied in California.
Sure enough, he and his colleagues found radioactive isotopes from the disaster in 15 bluefins caught by fisherman five months after the tsunami.
Radioactive materials from the damaged reactors bled into groundwater and the ocean.
Young tuna absorbed cesium 134 and cesium 137 isotopes while swimming in the accident-afflicted area and likely by eating contaminated plankton and small fish.

Madigan and his colleagues found the cesium, but they next needed to see if the levels could tell them anything about the fish’s movements.
To test the radioactive tracer idea, Madigan took samples of tissue from 50 fish caught in the waters near San Diego during the summer of last year.
He shipped the samples to Stony Brook University, S.U.N.Y., where a colleague analyzed them for cesium levels.

The two cesium isotopes decay at different rates.
Cesium 137 has a half-life of 30.1 years, cesium 134, 2.1 years.
The entire Pacific Ocean basin still holds slightly elevated levels of cesium 137 from the nuclear weapons testing that peaked in the 1960s, but the Fukushima power plant is the only source of cesium 134.
Elevated levels of cesium 134 therefore would indicate if the California-caught tuna are recent migrants from Japan.
By comparing the ratio of the two isotopes, Madigan and his colleagues were able tell approximately how recently the migrants had arrived.
With its shorter half-life, cesium 134 levels fall faster than those of cesium 137.
A higher ratio of 134 to 137 therefore indicates a more recent immigrant.

The work Madigan and his colleagues did prove that the cesium isotopes work as a tracer.
So far the technique confirms what scientists know about bluefin tuna: They found that all fish younger than 1.6 years old were migrants.
Only five of the 22 fish older than 1.7 years were migrants.
The larger fish had left Japan earlier in the year, but the smaller fish hung around their birthplace until early- or mid-June.

The transpacific journey took an average of approximately two months for the fish Madigan sampled. One bluefin may have managed to make the trip in just 30 days—a figure that jibes with the known daily swimming speed of approximately 172.3 kilometers per day.
The team reported their results in the March issue of Environmental Science & Technology.

Using Fukushima-derived radiocesium is a novel way of tracking the movements of oceangoing animals, wrote Texas A&M University at Galveston marine biologist Jay Rooker in an e-mail.
The approach "shows promise for tracking the movement of other highly migratory species in the Pacific Ocean—whales, turtles and sharks," he added.
Because the mixing of populations and transoceanic migrations can affect scientists' ability to estimate population size and fishing mortality, these kinds of studies are vital to informing management strategies Rooker wrote.

The short half-life of the cesium 134 means that soon the levels will be too low to be useful, but Madigan explains that there are other chemical techniques that researchers use to track migrating marine animals.
The cesium isotopes provide unequivocal evidence that the tuna came from the waters near Japan.
By matching the isotope signature with other methods—such as stable isotopes of carbon and nitrogen, which vary from region to region—researchers can use the longer-lasting isotopes as a proxy for the same information.
"One method is finite and one is infinite," Madigan says. "Once you've hammered down the relationship you can just use the infinite one in the future."

The next steps for Madigan and the team are to look at other species.
Those ocean-dwelling animals include albacore tuna, blue sharks, Pacific loggerhead sea turtles, salmon sharks, common minke whales and even birds such as sooty shearwaters.
If any of those animals carry cesium isotopes from Fukushima, they can be classified as Japanese migrants.
The fallout from the disaster could unlock secrets of ocean life.