Andreas Gursky is exhibiting a new photo series “Ocean",
pursueing his play on photography’s claim for the depiction of reality.
In his six-part series Ocean I-VI (2009-2010), Gursky used high-definition satellite photographs
which he augmented from various picture sources on the Internet.

Ocean III is a view of the Pacific Ocean that measures 4.5m long and 2.5m high.
It is the largest in a series of six photographs - one of two featuring New Zealand.
Gursky worked with high-definition satellite photographs that normally focus on the earth's landmasses.
Due to the absence of adequate mapping of the world's oceans, he recreated ocean zones himself after consulting shoal maps.

Extended Ocean, 2011
A image from Andreas Gursky's Ocean series, with white area added to the sides of the image and then put through Content-Aware Fill
According to the exhibition text: "In their darkly nuanced surfaces, he has worked to reconcile the division between the machine eye and the human eye, continuing the debates and practices begun in the nineteenth century regarding photography and the issue of artistic expression versus objective science."

Gallery director Chris Saines says Gursky is a "giant in the contemporary art world".
"We are tremendously excited to be able to represent the work of such an important
international artist, even more so given the particular nature of its subject, which in one way serves to represent our place in the Pacific like no other work in a New Zealand public collection. 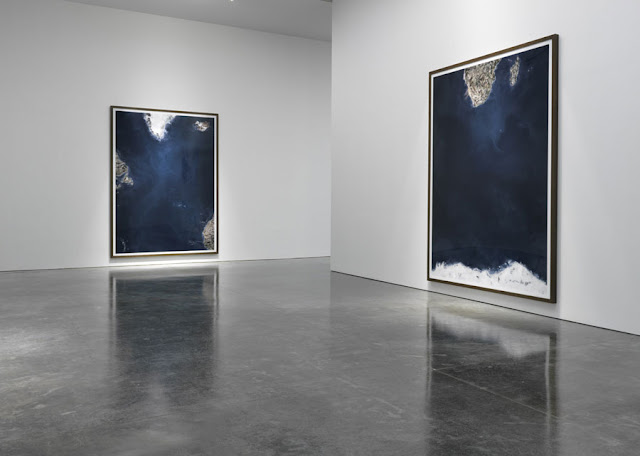 Gursky used high-definition satellite photographs which he augmented from various picture sources on the Internet.
The satellite photos are restricted however to exposures of sharply contoured land masses.
Consequently the transitional zones between land and water – as well as the oceans themselves – had to be generated completely by artificial means.
At second glance one realises however that Gursky’s interest in the image is not cartographic in nature.
The distances between the continents do not follow any systematic programme, such as “Google Earth” offers, but are slightly shortened or elongated according to compositional principles.

"The subject of Ocean III deals with a core strand of interest to New Zealand and Pacific audiences and artists - that great expanse of ocean that defines our position in the world. It features the islands of New Zealand at the edge of a seeming blue abyss. It is a remarkable reminder of our Oceanic and Pacific location, and a fascinating realisation of how great that limitless ocean around us really is".