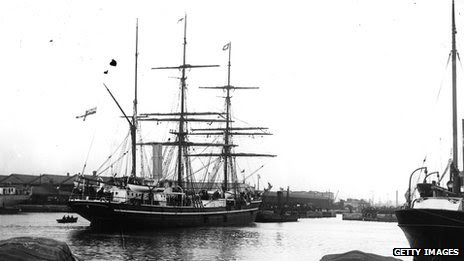 The wreck of the ship that carried Captain Robert Scott on his doomed expedition to the Antarctic a century ago has been discovered off Greenland.
The SS Terra Nova was found by a team from Schmidt Ocean Institute, a US research company.

Sonar mapping revealed an unidentified feature on the seafloor

Scott and his party set off from Cardiff aboard the Terra Nova in 1910 with the aim of becoming the first expedition to reach the South Pole.
The ship had a life after the polar trek, sinking off Greenland's south coast in 1943.
It had been on a journey to deliver supplies to base stations in the Arctic when it was damaged by ice. The Terra Nova's crew was saved by the US Coast Guard cutter Southwind.

On arriving at the geographical South Pole in January 1912, Scott and his party discovered they had been beaten to it by a Norwegian team led by Roald Amundsen.
The polar team led by Scott died on their return journey from the pole; their bodies were found by a search party eight months later.

A crew from the Schmidt Ocean Institute discovered the Terra Nova whilst testing echo-sounding equipment aboard its flagship vessel - the R/V Falkor.
One of the scientists noticed an unidentified feature during sonar mapping of the sea bed.

Technicians dropped a camera package called Shrimp to just above the presumed wreck to film it.
Camera tows across the top of the target showed the remains of a wooden wreck laying on the seabed.
Footage from an underwater camera also identified a funnel lying next to the ship.

Taken together, the features of the wreck closely matched historical photos of the Terra Nova, leading to the identification.

Brian Kelly, an education officer from the Discovery Point museum in Dundee, where the ship was built, told the Daily Record newspaper: "The Terra Nova has such a story."
She went through a lot in her lengthy history and really was the pinnacle of Scottish wooden shipbuilding.
"It is incredible that one of the most famous ships in history has been found 100 years after the race for the pole and in the year commemorating the event.