America rules the waves. But for how long?


From Bloomberg by Tobin Harshaw

A Q-and-A with Admiral James Stavridis about China's fake islands, India's real rise and sea power in the 21st century.

You'd be forgiven for thinking that control of high seas is becoming more vital than any time since World War II.
Which makes it the perfect moment for an authoritative new book on the role of sea power in shaping human civilization across the globe and across the ages.

Into the breach steps James Stavridis, a retired four-star admiral and former supreme allied commander of the North Atlantic Treaty Organization.
His new book, "Sea Power: The History and Geopolitics of the World's Oceans,"is a breezy yet comprehensive overview of the topic, as well as a sort of sailor's log and meditation on the power of the Great Blue.
I decided a talk with Stavridis, now dean of the Fletcher School of Law and Diplomacy at Tufts University, could help put the rising tensions on the world's waterways into perspective.
Here is an edited transcript of our interview.

TH: Admiral Stavridis, before opening the book, I assumed it would be a technical treatise on naval strategy, a sort of 21st-century update of Alfred Thayer Mahan's epochal "Influence of Seapower Upon History."
Instead, it's a very personal, impressionistic book; we learn as much about the adventures of neophyte Midshipman James Stavridis in the 1970s as about the Battles of Salamis, Trafalgar and Midway.

JS: There will be other books, and I have in mind to expand on Mahan for the current age. But it took me 40 years to write about my life at sea, and I thought back on that and reflected on it in relation to today's world, with the return of great-power politics. I wanted to put the reader into the captain's chair. 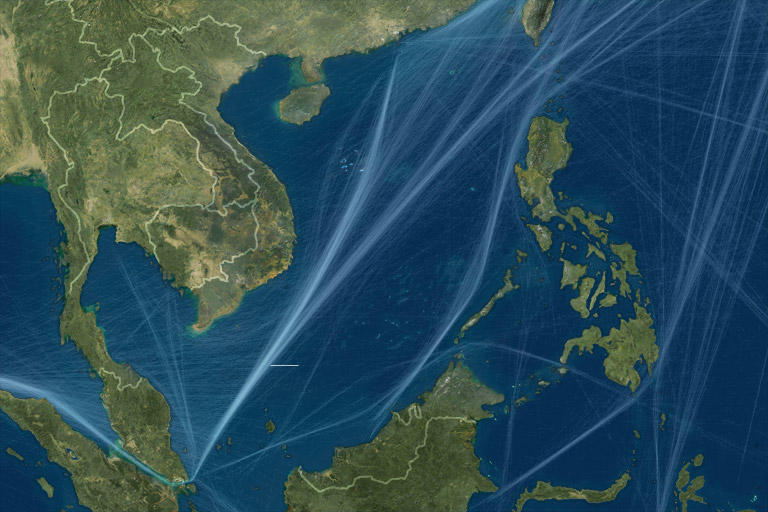 TH: You warn that the U.S. and China have to avoid the so-called Thucydides Trap, where miscalculation of an enemy's intentions can lead to an otherwise avoidable war. Given China's island-building and other aggressions, how can the U.S. and regional partners push back without pushing too far?

JS: First thing, China plays the long game. They are not concerned with 10 or even 50 years into the future. They are looking centuries ahead. We need to match that mindset. The Chinese feel that they will inevitably dominate Asia and play from a position of confidence. They don't lunge for the ball, they pull at all levers: economic, political, historical and military.
The appropriate response for the U.S. is to maintain itself as the pre-eminent Pacific power, not just militarily but through economic and geopolitical leadership. It is a region without a NATO, and the U.S. withdrawal from the Trans-Pacific Partnership was a giant miss for us. That makes it more vital to strengthen individual military relations with friendly nations.

TH: You’re a former military commander of NATO, which many Americans think of as a ground force. But as you point out, in the Cold War, the Baltic Sea and the GIUK Gap 1 were tense places. With Vladimir Putin getting very aggressive at sea as well as on land, what can the alliance do in response?

JS: Both the Baltic and Black Seas are inland lakes in Russia's eyes. NATO needs to deploy and conduct joint exercises repetitively; it can't just be the U.S. In the Baltic, operating with non-members -- the Finns and the Swedes -- as well as Denmark, Germany and Britain is incredibly important. Same thing in the Black Sea, with members Bulgaria, Romania and Turkey and non-members Georgia and Ukraine.
However, these are relatively small, contained waters, so the possibility of a dustup is high. We need to adhere closely to "incidents at sea" agreements with Russia and operate in ways that can deconflict. And we need to use our land-based air in conjunction with the ships, because the Russians will. The overall strategy, at sea and land, is to reassure allies that we will be there in a crisis and to keep Vladimir Putin from "leaning in" with hybrid war, as he did in Ukraine.

TH: How about in the Mediterranean?

JS: In terms of refugees, both from the war in Syria and from Libya, we are only treating the symptoms, all the effects of the so-called Arab Spring. Right now, the Jordanians, Lebanese and Turks, with European money, have opened respectable refugee camps. But if that becomes unsustainable, if the tens of millions of displaced people see an opportunity to cross to Europe, they will. NATO has 800-plus ships and a fundamental role in all this, but we can be insufficiently mindful that the Med is an ocean highway.

TH: You have a surprising prediction: that the 21st century will be more about the Indian Ocean and its appendages -- the Arabian Gulf and Red Sea -- than about the Pacific or Atlantic. How do you see this playing out, and what are the biggest opportunities and risks for the U.S. and its allies?

JS: The biggest opportunity in geopolitics right now is the rise of India. By mid-century, it will be more populous and younger than China. It is centrally located, on both the continent and the sea. The ocean also abuts Africa, the fastest-growing place in the world. Indonesia will be the fourth-largest nation.
We should be doing everything we can to partner with India. Yes, there is corruption and weak infrastructure. But it is a democracy and cohesive, and the elites speak English, plus a cultural affinity built by the British Raj.
As for the Gulf, oil may become less important as the world switches to sustainables and other forms of energy. But the geopolitics, the fraught relationship between Iran and the Sunni states, will continue to create tensions and challenges for us.


TH: All this means the U.S. ability to maintain a forward presence at sea will be further stretched. Our main tool for this has long been the aircraft carrier. Yet many people feel that the new Ford Class supercarriers are hugely vulnerable and no longer as important to projecting power. Do you disagree?

JS: I think that is exactly half right. I think they are more vulnerable than ever because offensive weapons are better than ever: submarines are quieter, cruise missiles are more accurate, there is a growing ability to target from space. And the limited range of the new F-35 fighter is problem. It will mean having to integrate long-range, land-based air with the tactical punch from the flight deck.
Yet the carrier strike group is still the premier flexible power-projection option. It can cover 700 to 750 miles a day. And the carriers are strongly protected by nuclear submarines and Arleigh Burke-class destroyers with Aegis missile-defense systems. If we went to war at sea, we would take some hits -- but I would still bet on the carrier.

TH: When you describe the famed entry of Commodore Perry into Tokyo Bay in 1853, you call it an early example of what we now call "soft power." That's not a concept the Trump administration has a lot of respect for. What are the main ways you feel the military, and the Navy in particular, could use soft power to effect today?

JS: In my career I had many opportunities to deploy aircraft carriers, but I felt the most effective were soft-power operations, and it’s the flexibility of maritime operations that made it work. Sending them, as well as our two hospital ships, the Comfort and Mercy, which can do hundreds of thousands of patient treatments on a single deployment, are the ultimate in disaster relief and humanitarian aid. For example, the carrier Ronald Reagan was the first foreign responder to the tidal wave and nuclear disaster at Fukushima, Japan, in 2011. That strike group provided electricity, refueling, medical care, etc. Same thing for the Indian Ocean in 2004, Haiti in 2010.
It's not just emergencies. Engineers from our large-deck amphibious ships can come ashore in poor nations and install wells, build clinics and schools. Sailors set up health facilities, visit orphanages, run sports clinics. The Navy can be a symbol of U.S. confidence and compassion.

TH: Last, one of your other big warnings is about environmental degradation -- both in terms of climate change and, more specifically, ocean pollution and destruction of fisheries etc. What needs to be done now to turn things around?

JS: Donald Trump's decision to pull the U.S. out of the Paris agreement is a huge blow. Voluntary, international cooperation on emissions control is the way forward, and now that is in question. There are a lot of international organizations that work on fisheries, scientific monitoring, deal with pollution and the like, but they are mostly under the United Nations umbrella. And strengthening them under Trump will be tougher.
In the U.S., we need better interagency cooperation: all cabinet-level and other organizations -- Treasury, Justice Department, Coast Guard -- working together to think through our regulatory regimes, share data, and reach a common understanding of how to go after lawbreakers. Oceans are the biggest crime scene in the world.
But above all, we need better public-private cooperation. You cannot solve this globally without working with the companies that move 95 percent of the world's good across the ocean highway. It would be like developing a cyber-defense strategy without talking to Microsoft or Google. People call the Amazon the "lungs of the earth," but it's really the oceans. And if we cannot count on sustainable oceans, our future is bleak.