Tamu Massif rivals the size of Olympus Mons on Mars.

Geophysicists have discovered what they say is the largest single volcano on Earth, a 650-kilometre-wide beast the size of the British Isles lurking beneath the waters of the northwest Pacific Ocean.

>>> geolocalization with the Marine GeoGarage <<<
Tamu Massif is the largest feature of the Shatsky Rise mountain range, marked on this map, situated around 1,000 miles east of Japan.
The range was formed following the eruption of the Tamu Massif volcano between 130 and 145 million years ago

The megavolcano has been inactive for some 140 million years.
But its very existence will help geophysicists to set limits on how much magma can be stored in Earth's crust and pour out onto the surface.
It also shows that Earth can produce volcanoes on par with Olympus Mons on Mars, which, at 625 kilometres across, was until now the biggest volcano known in the Solar System.

“This says that here on Earth we have analogous volcanoes to the big ones we find on Mars,” says William Sager, a marine geologist at the University of Houston in Texas.
“I’m not sure anybody would have guessed that.”
Sager and his colleagues describe the structure, named Tamu Massif, in Nature Geoscience on 8 September.
‘Tamu’ is an acronym for Texas A&M University in College Station, where Sager was formerly employed. 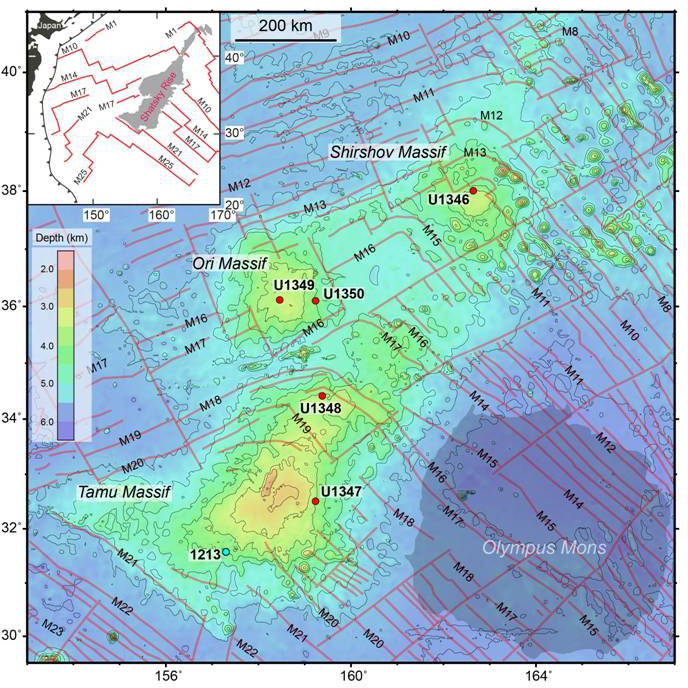 This chart shows the Tamu Massif's location along the Shatsky Rise - a mountain range beneath the Pacific.
A single eruption from the volcano is thought to have caused the range to form between 130 and 145 million years ago.
The chart also shows Tamu Massif's relative size to Mars' Olympus Mons volcano

Tamu Massif has been long known as one of three large mountains that make up an underwater range called the Shatsky Rise.
The rise, about 1,500 kilometres east of Japan, formed near a junction where three plates of Earth’s crust once pulled apart.

Shallow rock cores from Tamu had previously revealed that it was made of lava.
But geologists thought that the mountain, which rises 4 kilometres from the sea floor, might have built up from several volcanoes erupting such that their lava merged into one pile.
The islands of Hawaii and Iceland were built this way.

Sager and his colleagues were startled by findings they made after sailing the research vessel Marcus G. Langseth over Tamu in 2010 and 2012.
They used air guns to send seismic waves through the mountain, and monitored the reflections.
The seismic waves penetrated several kilometres into the massif — and showed that all of its lava flows dipped away from the volcano’s summit, implying a central magma vent.
“From whatever angle you look at it, the lava flows appear to come from the centre of this thing,” says Sager.

Over time, the lava coursed downhill and then solidified, building up a volcano with a long, low profile similar to that of a shield laid on the ground.
The world’s biggest active shield volcano, Mauna Loa on Hawaii, has an areal footprint just 15% of Tamu’s — but Mauna Loa is taller, rising 9 kilometres from sea floor to summit.
Scott Bryan, a geologist at the Queensland University of Technology in Brisbane, Australia, warns that not all of Tamu may have come from a single magma vent. There could be separate sources, deeper than the seismic waves penetrated, that could have oozed out lava and inflated the mountain from below, he says.

Because ship time is at a premium, the study is one of the first to peer at the internal geometry of these massive underwater mountains.
It is possible that other megavolcanoes are waiting to be discovered.
“There may be bigger ones out there,” says Sager.