GloFish's Electric Green Tetra may or may not have an unfair advantage in the wild.

Since Yorktown Technologies first sold its genetically modified pet — the GloFish — in 2003, the fluorescent fish, an altered variety of zebra fish, has become a popular aquarium item, with millions sold in various neon hues.

In February, Yorktown introduced the Electric Green Tetra, a genetically modified black tetra fish. Like its zebra fish cousin, the GM tetra is a small freshwater fish that includes genetic material from a fluorescent coral that makes it neon-bright. Under a black light, it glows in the dark.

The two GloFish are very different, however, in what environmentalists and some experts say is a crucial way: The heat-loving zebra fish is from southern Asia and can’t survive long in cooler U.S. waters; thus, the Food and Drug Administration has ruled that there would be little threat of invasion of U.S. waterways if it were released from home aquariums.
But the black tetra is native to South America and likely to be happy making a splash in the inland waterways of South Florida and Latin America.

In South Florida, the modified black tetras could upset an environment already burdened with 30 types of nonnative fish.
In South America, they could mean an undesirable interference in natural biodiversity.

“My worry is that they’ll be such a novelty that they will be imported back to [South America] and kids will let them go and they’ll start interbreeding with fish whose genomes are very similar,’’ said Barry Chernoff, a freshwater fish biologist and chair of the environmental studies program at Wesleyan University in Middletown, Conn.
“We would see the spreading of the fluorescent coral gene in the native fish.’’ 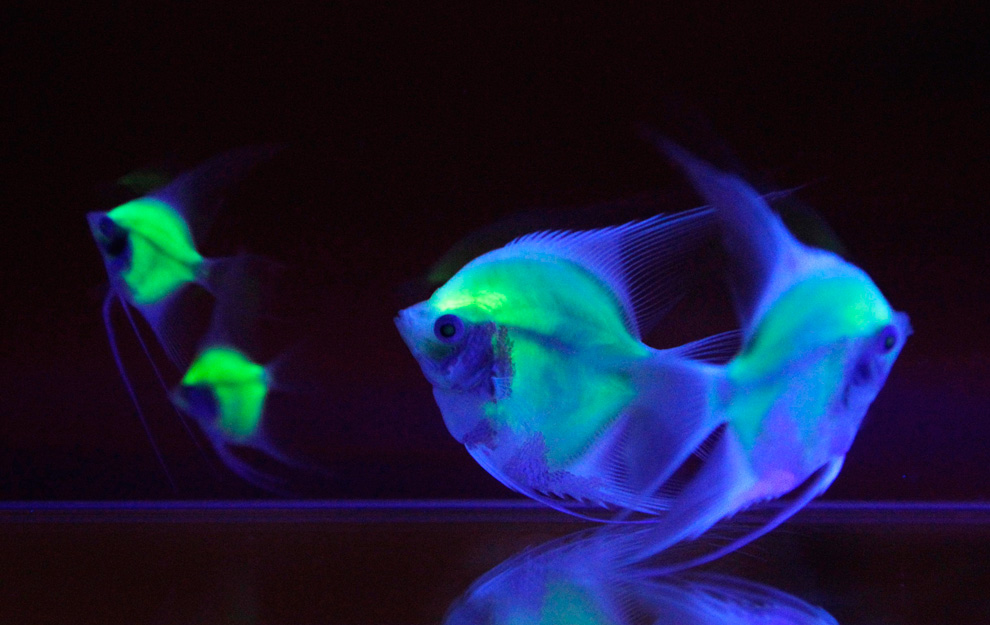 Genetically engineered angelfish (Pterophyllum) glow in a tank under a blacklight, at a fish farm in Pingtung, southern Taiwan on September 16, 2010.
The fish are the world's first fluorescent angelfish which were created by a joint project between Taiwan's Academia Sinica and Jy Lin, a private biotechnology company.
The breed is the largest fluorescent fish in the world which are able to mate and reproduce, said Yu-Ho Lin, Chairman of Jy Lin. The fish are expected to be sold at around $30 after certification. (REUTERS/Pichi Chuang)

Because pet fish are often let loose by owners who no longer want them, Chernoff and others say the threat is serious.

“The neotropical region contains the most diverse freshwater fish fauna and complex freshwater ecosystem in the world, with some 6,025 fish species so far recognized,’’ Gordon McGregor Reid, chair of the Wetlands International Freshwater Fish Specialist Group of the International Union for Conservation of Nature, said in an e-mail.
“We meddle with this at our peril.”

Yorktown’s chief executive, Alan Blake, said the company chose the black tetra to modify because it is nonaggressive and shows no tendency to be invasive.
“The black tetra has been sold for over 60 years and there has never been an ecological concern with it,’’ Blake said.

There have been reports of natural black tetras in Florida’s waters.
But Blake said there is no evidence that groups of them live there permanently; probably, he said, they are eaten by predators.

Blake pointed to research by Jeffrey Hill, who was part of the task force that reviewed Yorktown’s successful application to raise the GloFish tetra in Florida.
In a 2011 study, Hill found that largemouth bass and mosquito fish in Florida ate twice as many red GloFish as regular zebra fish when they were all put in tanks together.
“Florida is a predator-rich environment. [The GloFish] is considerably more vulnerable’’ than its non-modified counterparts, said Hill, a nonnative fish specialist at the University of Florida’s Tropical Aquaculture Laboratory.

That’ s not reassuring to environmentalists such as Chernoff.
“So their plan for not having these things take over the wild is predation by other species? Great,” he said.


Electric Green Tetra's swimming at night with blue LED.
Their DNA has been modified so they glo

Breeding between escaped GloFish and native fish could weaken the progeny and negatively affect the native fish species in future generations, said Brian Zimmerman, aquarium curator at the Zoological Society of London.

The fluorescence in the GloFish may give them an unfair advantage or a disadvantage as they forage for food or in their roles as prey and predator, Zimmerman said.
The point is, nobody knows for sure. “GM fish have only been around for a few years, and I don’t think we know enough to say they are safe,” he said.

If GloFish tetras breed with wild black tetras, the fluorescent gene would be passed on for only a limited number of generations, said Eric Hallerman, a scientific adviser to Yorktown and chair of the Department of Fish and Wildlife Conservation at Virginia Tech in Blacksburg.

GloFish tetras reproduce at half the rate of regular black tetras, and the fry survive at 97 percent the rate of their natural peers, Hallerman said.
Furthermore, fluorescence takes energy and is a burden that makes the fish less fit, so it will be bred out, he said — eventually the trait “is going to disappear.’’

But some scientists disagree.
“There is no way of predicting any species’s fitness in the absence of environmental settings, because species do not behave as predicted by models,’’ Paulo Petry, a freshwater fish specialist in Latin America for the Nature Conservancy, said.
“I would opt for the precautionary principle and not allow the commercialization of these things in regions where there is even a remote chance of establishing a viable population,” he said.

GM fish are not allowed in Canada and much of Europe, and GloFish cannot be sold in California.
The FDA determined in 2003 that GloFish did not need to go through a full approval process, saying there was no evidence that the altered fish posed an increased risk to the environment and there was an absence of a clear risk to public health.
(Florida, which hosts a large ornamental fish industry, including the two fish farms that raise GloFish, requires approval before genetically modified fish can be raised there.)

“We think the feds should step in whether or not [GloFish] pose a threat. It shows the big holes in our regulatory system, in how we deal with genetically engineered animals,’’ said Eric Hoffman, food and technology campaigner at Friends of the Earth.
“If people look down into water and look at glowing fish, they might be pretty, but it’s a sign of genetic contamination and a type of pollution we don’t want,’’ Hoffman said.