Shipping looks to hydrogen as it seeks to ditch bunker fuel 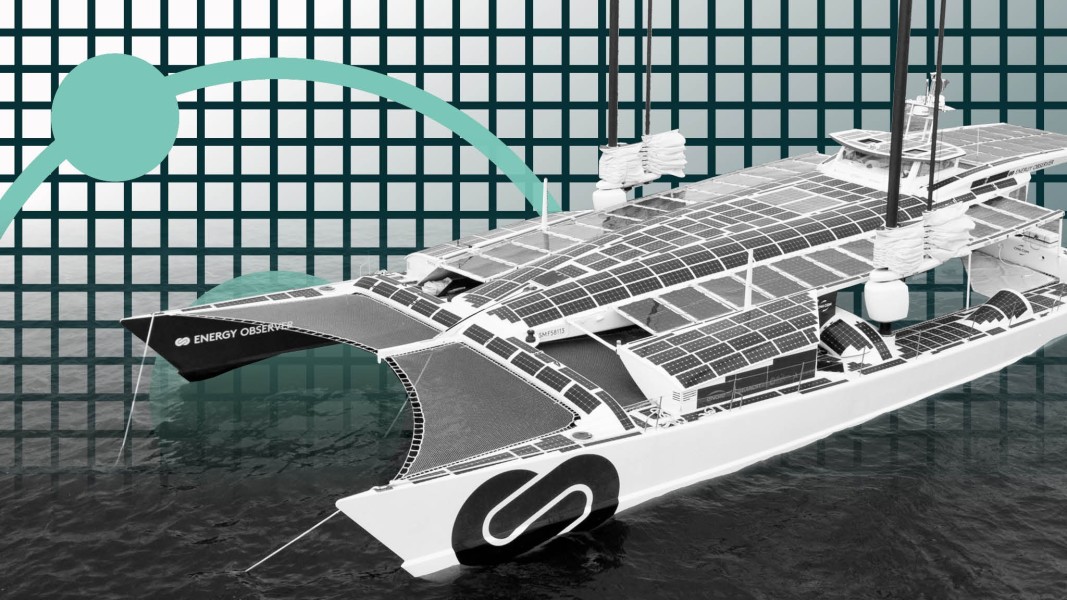 From FT by Harry Dempsey

The Compagnie Belge Maritime du Congo launched its first steam-powered ship, the SS Leopold, on its maiden trip from Antwerp to Congo in 1895.
Today CMB, the colonial-era group’s successor, carries commuters between the Belgian city and nearby Kruibeke on a ferry fuelled by hydrogen.

“This is the fourth energy revolution in shipping — from rowing our boats to sails to steam engine to diesel engine and we have to change it once more,” said Alex Saverys, CMB chief executive and scion of one of Belgium’s oldest shipping families.

Shipping produces about 3 per cent of global greenhouse gas emissions and without action its contribution is likely to rise for decades as global trade grows.
The International Maritime Organization, the UN agency that regulates the global industry, wants to at least halve its impact by 2050.

Many industry figures are pinning their hopes on blue or green hydrogen — produced using natural gas with carbon capture or renewable electricity and whose only byproduct when combusted is water — to help steer away from polluting bunker fuel.
“There is no question whether hydrogen will be the energy carrier of shipping in 2050,” said Lasse Kristoffersen, chief executive of Norway’s Torvald Klaveness.
“The question is, how do you produce it and which form do you use it as a carrier?” 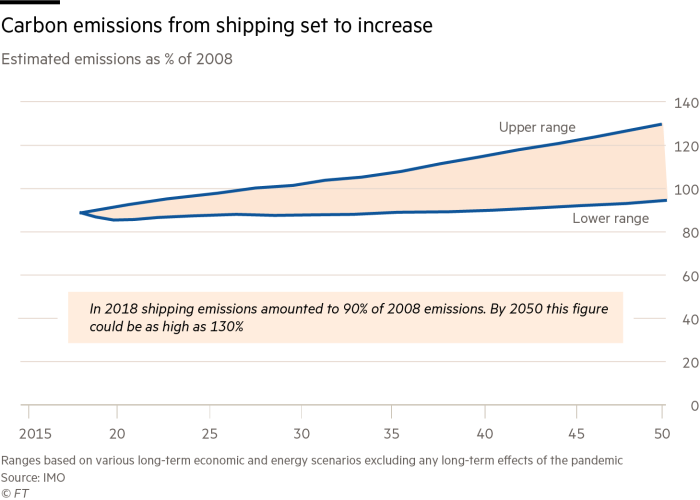 But other executives operating the huge hulks that criss-cross the planet transporting everything from raw materials to consumer goods are sceptical hydrogen can play more than a bit part in the fuel transition.
While pilot projects such as CMB’s prove the fuel is viable at small scale on set routes with refuelling infrastructure in place, 85 per cent of the sector’s emissions come from bulk carriers, oil tankers and container ships, according to analysis by Royal Dutch Shell.
Nothing can power them as efficiently and cheaply as fossil fuels.

“This is not going to be an easy sector to decarbonise,” said Bud Darr, executive vice-president at Mediterranean Shipping Company, the world’s second-largest container shipping group.
“Ocean shipping’s need for autonomy requires us to carry a large amount of fuel.
We need a range of alternative fuels at scale and we need them urgently.
We’re keeping an open mind and exploring all possible solutions.”

Hydrogen has low energy density compared with heavy fuel oil.
Storing it in its liquid form below -253C requires heavy cryogenic tanks that take up precious space, rendering it unfeasible for large cargo ships.
“With the current state of technology, we cannot use hydrogen to fuel our vessels,” said Morten Bo Christiansen, head of decarbonisation at AP Moller-Maersk, MSC’s larger rival.

However, the industry has grown increasingly optimistic about using ammonia, a compound of hydrogen and nitrogen, to fuel the workhorses of global trade without belching out greenhouse gases.
Though foul-smelling and toxic, ammonia is easy to liquefy, is already transported worldwide at scale and has nearly twice the energy density of liquid hydrogen.
“The cleanest, most realistic transport fuels of the future are hydrogen-based fuels including green ammonia,” said Rasmus Bach Nielsen, global head of fuel decarbonisation at commodity trader Trafigura.

Engine makers believe the technology is within reach.
Finland’s Wärtsilä said it would be ready to scale up ammonia-ready engines by the end of next year, while Germany’s Man Energy Solutions plans to deliver an ammonia-powered oil tanker in 2024.
Both said that until supply infrastructure was in place, new engines would also need to be compatible with bunker fuel.
Almost all of the 176m tonnes of ammonia produced a year, mostly for fertiliser, currently uses “grey” hydrogen extracted from natural gas in an energy intensive process that emits CO2. 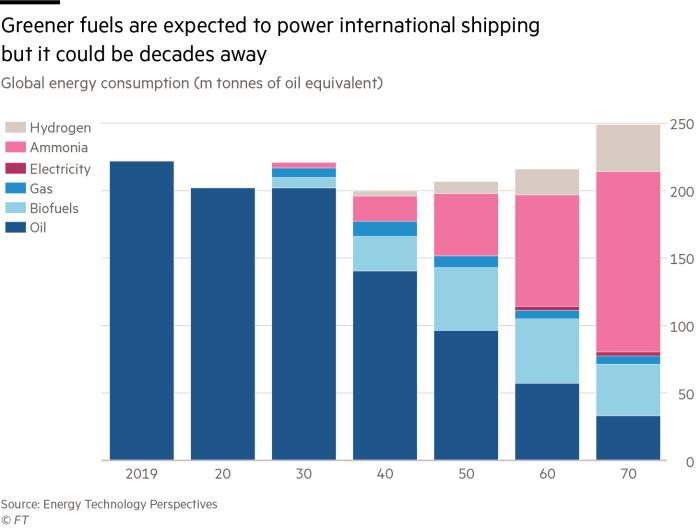 Producing carbon-free ammonia at scale is a challenging task.
About 150m tonnes would be needed to meet 30 per cent of shipping’s fuel demand by 2050, according to a report by catalysis company Haldor Topsoe.
That would require 1,500 terawatt hours of renewable energy, roughly equivalent to all of last year’s global wind power output.
Pockets of the shipping industry are now calling for a global carbon levy to accelerate production and adoption of next-generation fuels.
“Technology is there and ready,” said Bach Nielsen.
“Now we need regulation.” However, with the IMO’s 174 member states including oil producers and commodity exporters, reaching agreement on a carbon price is no easy task.

The EU is set to make proposals in June to include shipping in its emissions trading scheme but shipping executives believe a global carbon tax would have to be several times higher than the EU’s current record prices above €47 a tonne to make hydrogen-based fuels competitive.
Any transition to hydrogen or hydrogen-based fuels is likely to be a lengthy process given the industry’s caution in shifting to a less-polluting fossil fuel.
Even now, only 11 per cent of new vessels on order will be primarily powered by liquefied natural gas, according to consultancy Drewry.

Medium-term decarbonisation efforts by the biggest shipping companies are primarily focused on low-carbon synthetic fuels and biofuels.
Maersk, which plans to launch its first carbon-neutral vessel in 2023, is backing methanol — either biomethanol derived from waste matter such as wood or e-methanol produced from captured CO2 and green hydrogen.
France’s CMA CGM is investing in biomethane.
Both are compatible with existing engines. 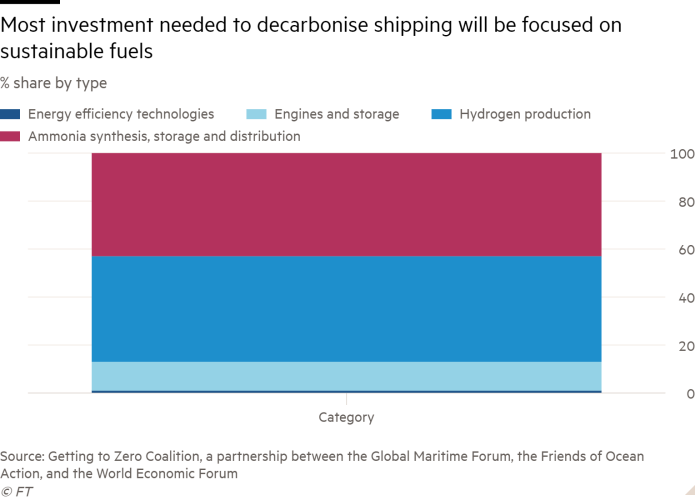 Detractors say biomass resources required for biomethanol are limited, and that production can lead to environmental problems such as deforestation and water degradation.
They also point to the fact that while synthetic fuels absorb CO2 when produced, they emit it again when burnt.
“Why on earth should we release CO2 into fuels when we have captured it in the first place?” asked Kristoffersen of Torvald Klaveness.

To many minds, that leaves hydrogen in some form at the core of any long-term vision to decarbonise shipping.
Few, however, can predict with confidence how quickly it might happen.
“We would expect technical challenges to be solved within the next few years,” said Jan Dieleman, head of ocean transportation at US grain trader Cargill.
“The main challenge is the regulatory framework, as even large-scale production of these fuels will always be more expensive than fossil fuels.
If we want to decarbonise shipping, we will need regulations to drive the change.”