Huge superyacht squeezes through narrow canals
Photographer Tom van Oossanen captured footage of a massive yacht being transported through tiny canals in Holland.
The ship was built by a Dutch company at their shipyard in Kaag and it's on its way to Amsterdam where it will undergo sea trials.
From CNN by Tamara Hardingham-Gill

It's not every day you see a gigantic superyacht weaving through the narrow canals of the Netherlands.
Thankfully photographer Tom van Oossanen was on hand to capture the astonishing scenes as Project 817, a 94-meter (310 feet) vessel built by Dutch shipyard Feadship, was transported from its Kaag Island facility to the North Sea at Rotterdam last week.
In a series of stunning images, the vessel, one of the largest to be launched in 2021, is guided through the water with tugboats, passing by houses and churches, as crowds look on in amazement.
According to Oossanen, around four to six superyachts are transferred along this route each year before going for sea trials, which usually take place in Amsterdam.
However, few are as big as Project 817, likely to be known as Viva when it officially launches.

Feadship's new superyacht Project 817 is guilded through the canals of Holland while en route to the North Sea.
Courtesy Tom van Oossanen
"It's always quite an operation," Oossanen tells CNN Travel.
"Everyone loves to see it."
But these maneuvers lead to serious snarl ups on land and water.
Got a dentist appointment?
"Then you're not going to make it," says Oossanen.
"Sometimes it takes an hour to go through a bridge, and with the amount of traffic we have in Holland, it soon builds up."
Kaag Island is one of two Feadship shipyards based inland (the other is in Aalsmeer, near Schiphol,) which means every yacht delivered from here has to be painstakingly pulled the same way.

The 94-meter vessel is maneuvered across a bridge in Woubrugge during the tricky journey.
Courtesy Tom van Oossanen
"They [the two shipyards] are actually quite far from the North Sea, so in order to transport the yachts to sea, they need to pass a small canal to Rotterdam," he explains.
"There's only one way to go."
Some parts of the canals along the route are only a few feet wider than Project 817, which spans 44.7 feet from port to starboard, so to say the transfer required great care and attention is something of an understatement.

"They maximized the design by using the limitations of bridges and waterways, which is quite interesting."
Feadship says the duration of a transfer is dependent on several different factors, such as the winds and bridge schedules, and can take between two to four days.
The transportation of Project 817 took around four days.
A superyacht is usually guided to sea by a team of five experts and a crew on board, according to Feadship.
Courtesy Tom van Oossanen
During the first stage of the operation, Viva was moved from the Kaag Island shipyard to Lake Braassemermeer, where it was fitted with pontoons to raise it up, thus ensuring it wasn't too deep to maneuver through the canals.
Tug boats were then attached to the pontoons on either side of the superyacht, which was also wrapped with protective foil, in order to guide the vessel through the water with precision.
By this point, it was ready to be pushed and pulled along the canals, making its way across a small bridge in the tiny village of Woubrugge, as well as Alphen aan den Rijn, a town in the west of Holland, before reaching the Dutch city Gouda, located south of Amsterdam, a few days later.
A team of five experts and a crew on board usually guide a superyacht to the sea, according to Feadship.

Project 817 passes through the Albert Schweitzer Bridge in Alphen aan den Rijn.
Courtesy Tom van Oossanen
"It takes a long time," says Oossanen.
"No one is in any rush, because you don't want to scratch the paint."
He explains that Feadship uses the same transport company and tug boat drivers for each delivery in order to ensure a smooth transition.

"They [the captains] are very experienced in what they're doing," he says.
"There's obviously a lot of money involved, so you want to do things properly.
And if you're going to rush things, things can go wrong."
It's perhaps no surprise that the transfer of Project 817 caused quite a stir on the ground, particularly while passing through the smaller villages along the way.
Some onlookers were absolutely bewildered by the sight of such a huge yacht in transit on the canal.

"People were actually asking questions like 'why would someone cruise his boat here?'" says Oossanen, who followed Viva for the first two days of the transportation.
"Obviously it's not cruising.
She's going to sea and she will never come back again."
While Oossanen has photographed many such transfers, he stresses that no shoot is the same, and he's constantly trying to come up with new ways to showcase the vessels.
"Every boat is different," he says.
"It's always the same route, but I always try to find different angles.
"It's a challenge to picture it in a different way. I'm really glad this one worked out so well."

Photographer Tom van Oossanen was on hand to capture the painstaking transportation.
Courtesy Tom van Oossanen
The photographer was particularly keen to document this journey, as he believes it may be the last time a vessel of this size is transported along this route.

Feadship opened a new facility in Amsterdam that has the capacity to build superyachts up to 160 meters long.
And a 140-meter dry dock has been fitted to its Makkum shipyard, allowing for the construction of yachts with wider beams. 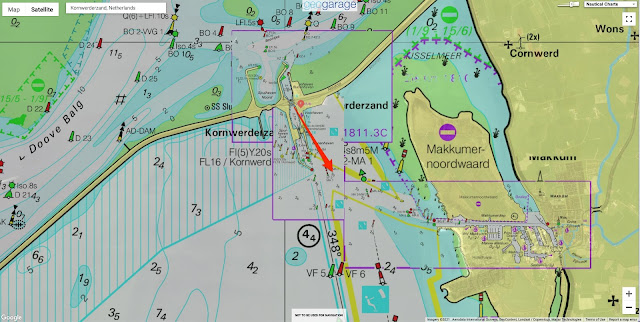 The Dutch government has also confirmed plans to widen the locks at nearby Kornwerderzand, which ultimately means larger vessels will be able to sail directly from Makkum to the North Sea in the future.
"They can easily build up to 160 meters in a new facility, so why would they still transfer such a big boat through all these canals and go through all the hassle?" notes Oossanen.

All of the vessels from Feadship's Kaag yard must take this narrow route in order to reach the sea.
Courtesy Tom van Oossanen

"Knowing the inside information, I think seeing a 94-meter doing this route is either going to take a while, or might not happen [again] at all."
Designed by Azure Yacht Design & Naval Architecture and De Voogt, Viva, which features a hybrid propulsion system, is a particularly striking sight to behold thanks to its pearl-white livery.
"By the time she's fully unwrapped, washed and cleaned, you're going to see her in the sun and she's going to twinkle like a star," he adds.

A Dutch superyacht has completed its four day passage through a narrow canal while passing through to the North Sea for testing.
At 94 metres long, it is the largest possible vessel which can pass through.
Tom van Oossanen, a superyacht photographer who captured the footage, said: 'The designers face limitations due to the narrow waterways and bridges. It's always a tight squeeze. The locals usually love it. It's very instagrammable'

Feadship confirmed to CNN Travel that the vessel successfully reached Rotterdam and will soon be ready for sea trials.
Project 817 will be closely followed by a number of significant superyachts currently under construction in the Netherlands.
Heeson's 60-meter Project Falcon, the shipyard's largest steel yacht so far, is due to launch in the coming months, while Oceanco's 117-meter Project Y719 is also expected at some point this year.
Meanwhile, work is still underway on Feadship's 95-meter Project 1009, which is currently in the final stage of construction.