With our coastal environments undergoing constant change, Earth observation satellites are being used to better strengthen our knowledge of changing coastlines. Climate change is having an undeniable influence on coastal areas.

A substantial proportion of the world’s sandy coastlines are already eroding owing to increased storm surges, flooding and sea-level rise.

For decades, coastal areas have been subject to intense urbanization and population growth. The European Union coastline is approximately 68,000km long, more than three times longer than that of the United States.

According to the European Environment Agency, almost half of the EU population lives less than 50km from the sea, with the seaside being Europe’s most popular holiday destination. 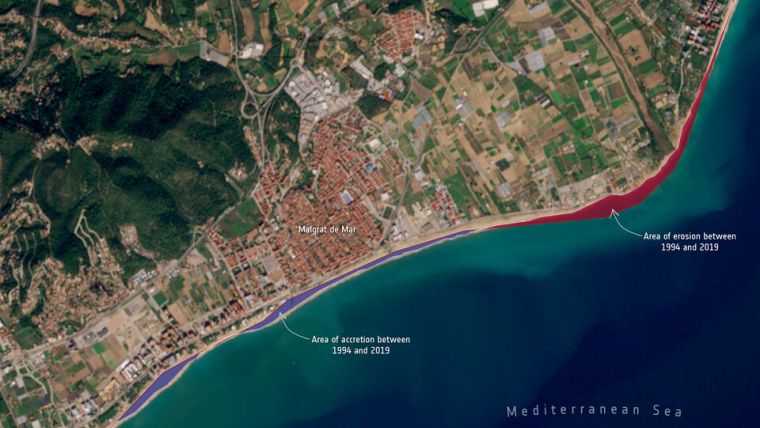 Understanding the Evolution of Coastal Environments

Coastal erosion is currently observed on many shorelines in Europe and will most likely worsen with rising sea levels. Monitoring coastal movement is key in understanding the evolution of coastal environments and these data can provide fundamental information to regional decision makers.

ESA has been developing an array of products to address these challenges.
As part of ESA’s EO Science for Society programme, the Coastal Change from Space project is providing important insights into global coastal changes.
Using 25 years of satellite imagery, including data from the Copernicus Sentinel-1 and Sentinel-2 missions, the team has mapped 2,800km of coastline analysed across four nations: the United Kingdom, Ireland, Spain and Canada. 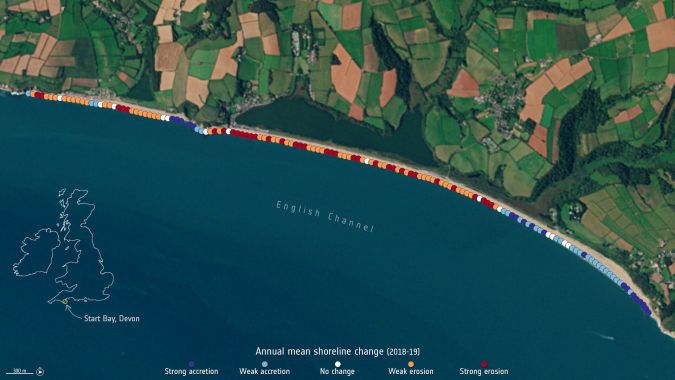 This image shows the annual mean shoreline change in Start Bay, Devon. Areas in red indicate strong erosion, while areas in dark blue show strong accretion.
(Contains modified Copernicus sentinel data (2018-19), processed by ESA/ARGANS Ltd)
Improved Accuracy on the Ground
As part of this project, a special process has been developed and applied to ensure that each pixel from every image has a greatly improved accuracy on the ground, as well as to identify where the coastline is precisely located on a specific date.
The frequent revisit rate of the Sentinel-1 and Sentinel-2 missions has enabled the changes to be observed as well as more permanent and extreme movements due to storm events.These results were then validated by a team of independent scientists from the four nations using results from field observations and local knowledge.

Roberto Díaz Sánchez, from the Directorate-General for the Coast and the Sea at the Spanish Ministry for the Ecological Transition and the Demographic Challenge, commented: “Taking part in this project has enlightened us in coastal surveillance from space. We are now firmly on the road to a new and promising coastal management paradigm, increasing our chances in successfully adapting our coasts to the effects of climate change.”

The current dataset of over 30,000 individual images is now being used to help coastal scientists better understand their local processes. 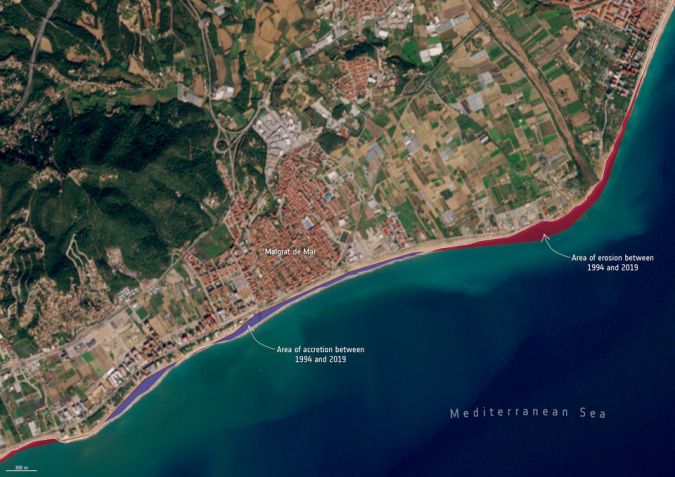 This image shows the shoreline changes along the coast of Malgrat de Mar, Spain. Areas of erosion between 1994 and 2019 are visible in red, while areas of accretion between 1994 and 2019 are visible in blue. The 1994 coastline data is extracted from US Landsat data while the 2019 data is from the Copernicus Sentinel-2 mission. (Contains modified Copernicus sentinel data (2018-19), processed by ESA/ARGANS Ltd/Landsat
Recognizing Areas of Greatest Change
Mónica López, Spanish delegate at ESA and Centre for the Development of Industrial Technology, said: “I would like to congratulate all of the team for the successful project which focuses on a very important topic for some countries, including Spain. I would like to highlight a very positive aspect of the project which has been the high involvement of final users in all phases of the project, but mainly during validation and testing.”
Koen Verbruggen, director of Geological Survey Ireland at the Department of the Environment, Climate and Communications, added: “The datasets being produced under the ESA-funded Coastal Change from Space project have great potential application in Ireland and come at a very opportune time as we are establishing a National Coastal Change Management Strategy. The coastal change data can help us recognize areas of greatest change, and thus prioritize the allocation of resources at national and local levels.” 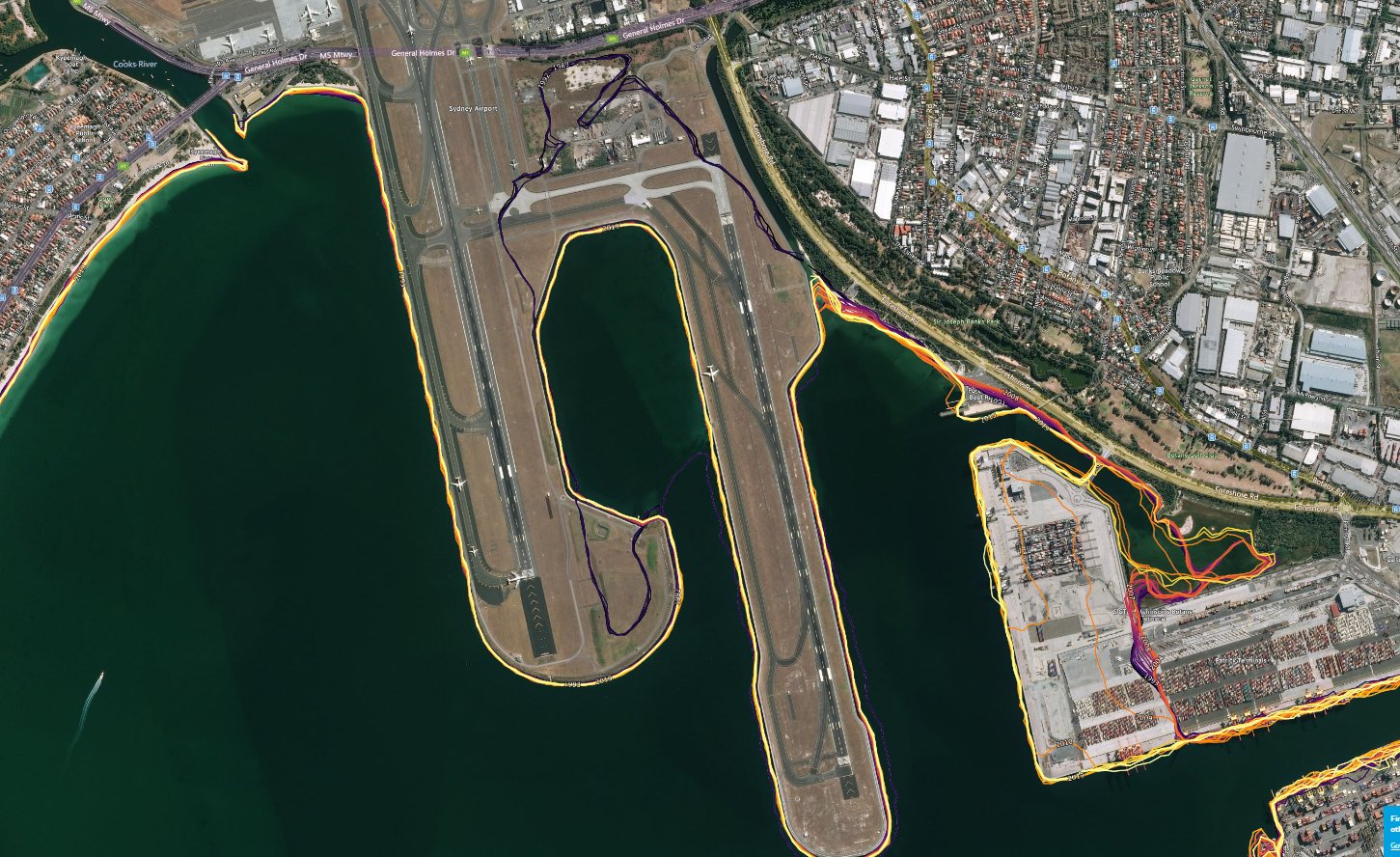 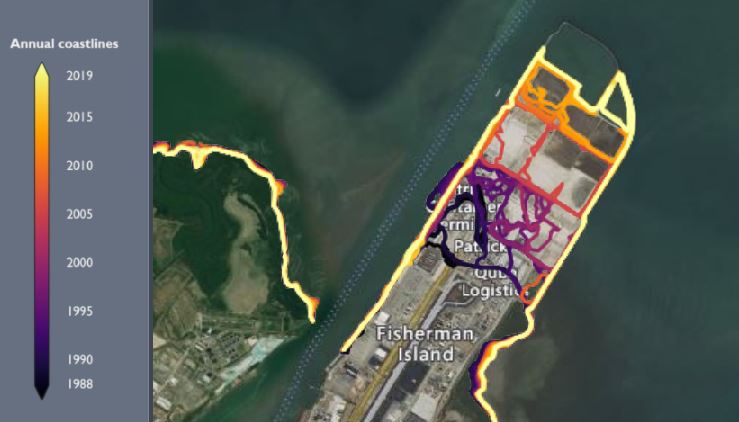 Another impressive example of coastal development visible in the dataset is the construction of the Port of Brisbane at Fisherman Island
The next stage in the journey will be to use these insightful datasets to improve the performance of models and join with other infrastructure and coastal zone morphological knowledge to improve forecasts and enable sensible mitigation strategies to be employed.
On 22 January, the results of the Coastal Change from Space project were presented in an online webinar.
Links :
Posted by geogarage at 1:37 AM