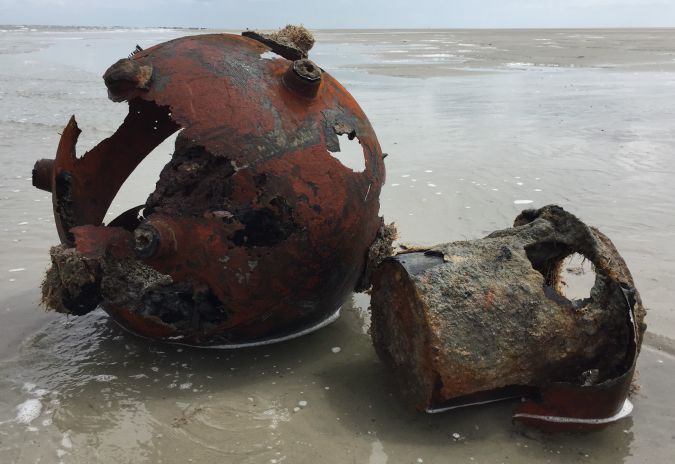 Munitions in the sea pose a risk to the sustainable development of the ocean economy.
In particular, they are a global challenge during the construction of wind parks, pipelines and other infrastructure.
To ensure high-quality performance during the execution of the necessary maritime munitions detection and clearance operations, industry experts and scientists from Germany have defined a set of requirements.
These are particularly important in the detection phase which requires the attention of hydrographic surveyors. 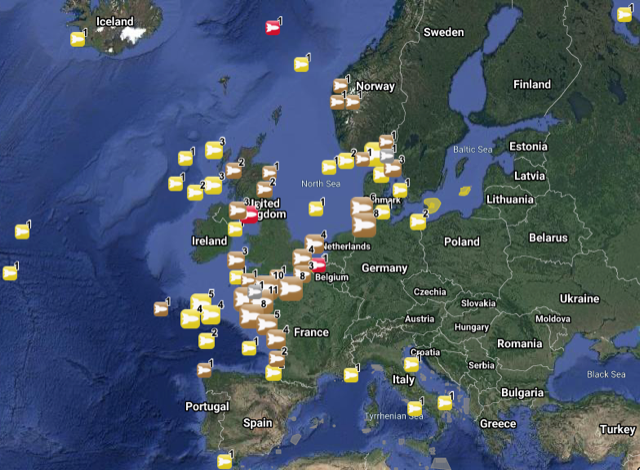 UXO sites in Europe
Safe access to large areas of the seafloor is a prerequisite for offshore economic development.
However, this ability has been compromised by the presence of submerged ammunition around the globe.
Over the past 140 years, ammunition has entered the sea in a variety of entry modes such as naval battles, aerial bombing and mine-laying.
Additionally, large quantities were dumped after the Second World War.
What appears unreasonable today was considered a safe and permanent means of disposing of weapons for many decades, until the practice was eventually outlawed by the London Convention on the Prevention of Marine Pollution by Dumping of Wastes and Other Matter in 1975.
Even today, in times of peace, naval target practice adds to the amount of munitions in the sea.

To this day, more than 1.6 million tons of both chemical and conventional (i.e. explosive) munitions remain in German territorial waters alone.
As an example, Figure above displays a corroded moored mine which was recovered in German waters.
This legacy is not only an obstacle to the offshore construction industry, it also affects sectors like coastal tourism and fishing.
On top of this, it will impede deep-sea mining endeavours in the future.
Ultimately, it may pose a threat to marine life due to gradual leakage of carcinogenic TNT and its metabolites into the seawater.
An international team of scientists working on the multi-year research project ‘Towards the Monitoring of Dumped Munitions Threat’ (MODUM), supported by NATO’s Science for Peace and Security (SPS) Programme have been mapping the ocean floor, locating and monitoring munition dump sites in the Baltic Sea.
The variety of chemical weapons and explosives left over from the Second World War is thought to pose a significant threat to marine life in the region.
Quality Guideline

The challenge of submerged ammunition – also referred to as unexploded ordnance (UXO) – crosses borders and, accordingly, operations concerning their detection and clearance have to be conducted in various judicial areas, some of which are only weakly regulated.
This issue generally concerns exclusive economic zones and international waters.
The absence of an industry standard left the acting stakeholders without guidance regarding best practices, personnel qualifications, technology specifications and requirements for documentation and communication.
This was the reason for the development of a new quality guideline by key German stakeholders from industry, relevant authorities and the scientific community.
Over the course of two years, the ‘Quality Guideline for Offshore Unexploded Ordnance Treatment’ was compiled under the leadership of Leipzig University.
The content of the document was defined, discussed and revised in a series of workshops and expert group meetings.
Experts were given the chance to make annotations to the work in progress twice, which led to the creation of a document that genuinely represents all relevant actors.
At the same time, this process of strong stakeholder involvement was set up to ensure wide acceptance of the finished guideline by the players it affects.
The resulting document covers the entire procedure for offshore munitions treatment which is subdivided into the phases of (I) Desk-based preliminary survey, (II) Technical survey, (III) Investigation of UXO target points, and (IV) Clearance and disposal.
These four phases are displayed in the flowchart in Figure 2.
Phase II: Technical survey, covers the detection of potential UXO. 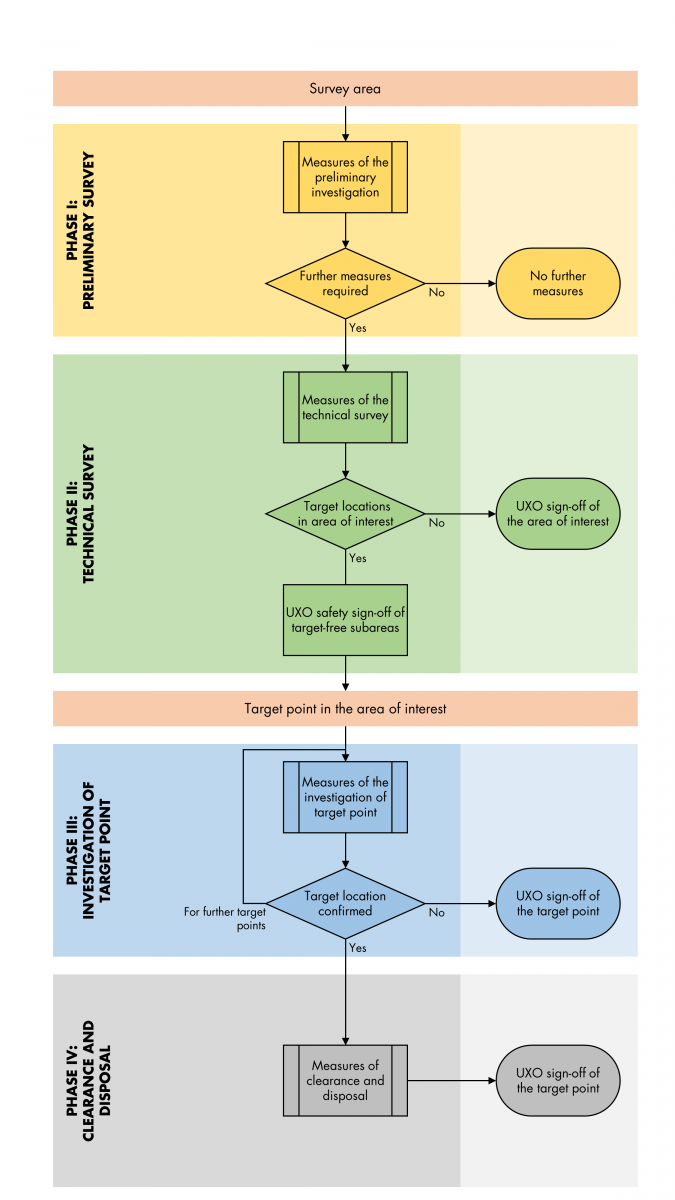 Magnetic and electromagnetic sensors are the survey technologies that are customarily applied during the execution of a technical UXO survey.
These are supported by additionally deploying side-scan sonar (SSS), multibeam echosounders (MBES) or sub-bottom profilers (SBP).
As each of these sensors has certain shortcomings, the use of a single technology is insufficient.
Magnetic sensors are easily supersaturated in areas where existing infrastructure or a high amount of scrap metal or geologic magnetic anomalies are present.

Electromagnetic sensors suffer from a limited range both vertically and horizontally, thereby rendering their application in larger regions or in areas covered by thick layers of sediment costly.
Both SSS and MBES are suitable during the search for exposed munitions items, but they do not support the detection of any targets that are buried in the sediment.
In addition, they do not allow for the distinction between an UXO and a similarly shaped boulder.
Finally, SBP, with its very limited area coverage, can only act as an additional source of information on items that have already been detected with the help of another sensor.

Consequently, multi-sensor approaches are required. In order to ensure sufficient data quality, the deployment of at least a towed array of magnetic sensors and side-scan sonar is necessary.
Figure 3 exemplifies an area containing numerous suspected UXO target points as measured with magnetometers.
Other sensors may be added to increase information density or to compensate for the shortcomings that are mentioned above.
Some areas may even unify a set of characteristics that make it impossible to guarantee the detection of all relevant munitions items, even if all available technologies were to be deployed.
Critical Survey Requirements

Owing to the large variety of munitions items that may be present and the potential range of their properties, a reference object for the UXO survey needs to be defined.
This is the single most important decision before a technical UXO survey can be conducted.
The reference object is the minimum threat item and is therefore the smallest munitions item that needs to be detected during the survey.
It has to be defined on the basis of information from numerous sources.

Figure 3: Submerged .50 caliber shells from USS Arizona.
First, historical research (which is part of Phase I: Preliminary survey) should provide an indication of the type and degree of contamination that can be expected in the area of interest.
Secondly, a hazard assessment for the surveyed area should provide information on the occupational and economic risks that originate from different types of munitions.
Finally, the technical limitations of the available technologies as laid out above need to be taken into account to ensure that the detection of the reference object is conducted in a manner which is technically feasible.

Other critical technical requirements that need to be defined include the desired detection depth of the minimum threat item below the seafloor, the positioning accuracy and the signal to noise ratio (with an emphasis on magnetic sensors).
All other parameters, such as the line spacing, the along-track-resolution or the height of the towed system above the seabed, are defined thereafter and depend mainly on the specifications of the reference object and the detection depth. 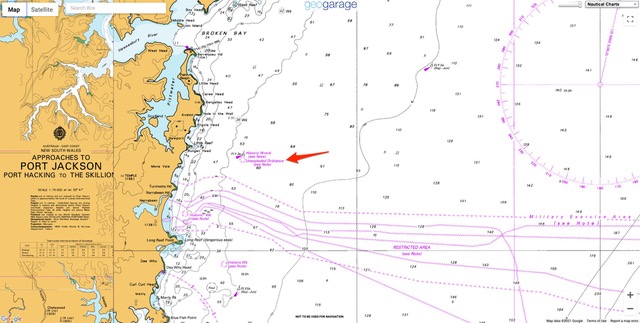 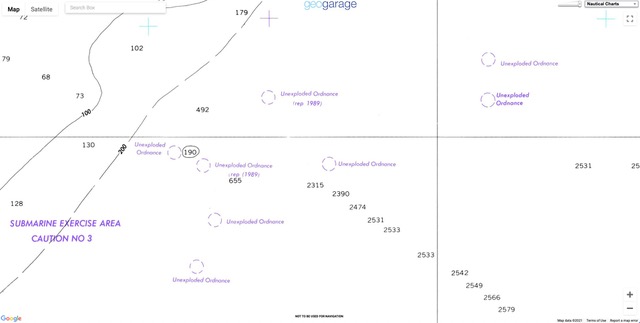 A technical UXO survey and the subsequent data processing and interpretation commonly result in two main deliverables; the UXO target list and the UXO sign-off certificate.
Both can only be issued by competent personnel, who hold an appropriate certificate of competence for the handling of explosives.

The target list is a directory of all points within the area of interest where the acquired survey data has indicated the presence of munitions.
These points are listed along with relevant information, like water depth, estimated object size and further parameters that are derived from magnetic sensors such as the total field amplitude and the magnetic moment of the measured signal.
The detected target points should then be scrutinized during Phase III: Investigation of target points. If confirmed, munitions should be subjected to Phase IV: Clearance and disposal, such as the items displayed in Figure 4.
As the second output, the UXO sign-off certificate is provided for all those areas that are free of suspected target points.
If the entire survey area is free of target points, a comprehensive sign-off certificate can be issued.
Due to the historical background, this scenario is highly unlikely in European waters and adjacent exclusive economic zones.
t is more likely that only part of the survey area is eligible for sign-off. Either way, the limitations of the sign-off certificate, such as the specified reference item, detection depth, time of the survey and the utilized survey technologies, need to be clearly communicated.
Finally, it should be noted that a UXO sign-off must be based on the results of a technical UXO survey.
A desk-based risk assessment cannot replace a qualified technical survey. 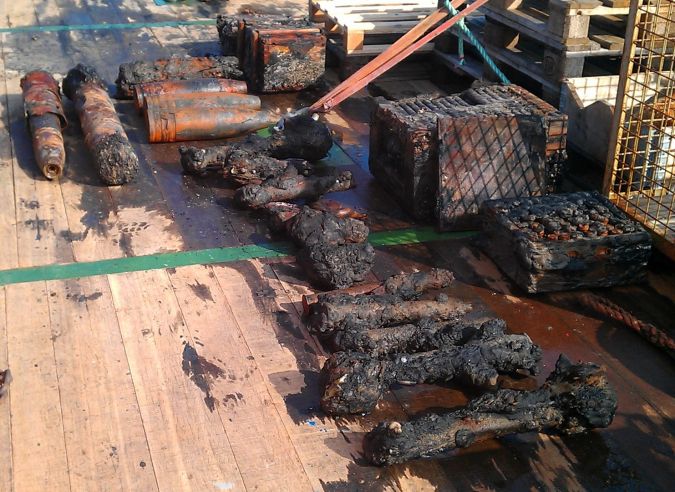 Figure 4: Salvaged munition items that are save to handle. (Courtesy: Henrich Hirde)
Conclusion

As submerged ammunition continues to present an obstacle to development, the new quality guidelines inform employers, authorities, survey companies and UXO clearance specialists alike on requirements for performing the detection and clearance of munitions in the sea.
While the document caters to the German legal specificities, most of its content is applicable to any offshore location and even to inland bodies of water.

The limitations of available technologies make the technical UXO survey a particularly intricate task. In order to collect an adequate amount of data, numerous sensors such as magnetometers and SSS need to be combined, with the aim of detecting at least a previously defined reference object.
This results in the generation of a target list and a UXO sign-off certificate, both of which are of paramount importance to the mediation of a hazard that affects the ocean economy and the marine environment alike.
Links :
Posted by geogarage at 1:06 AM